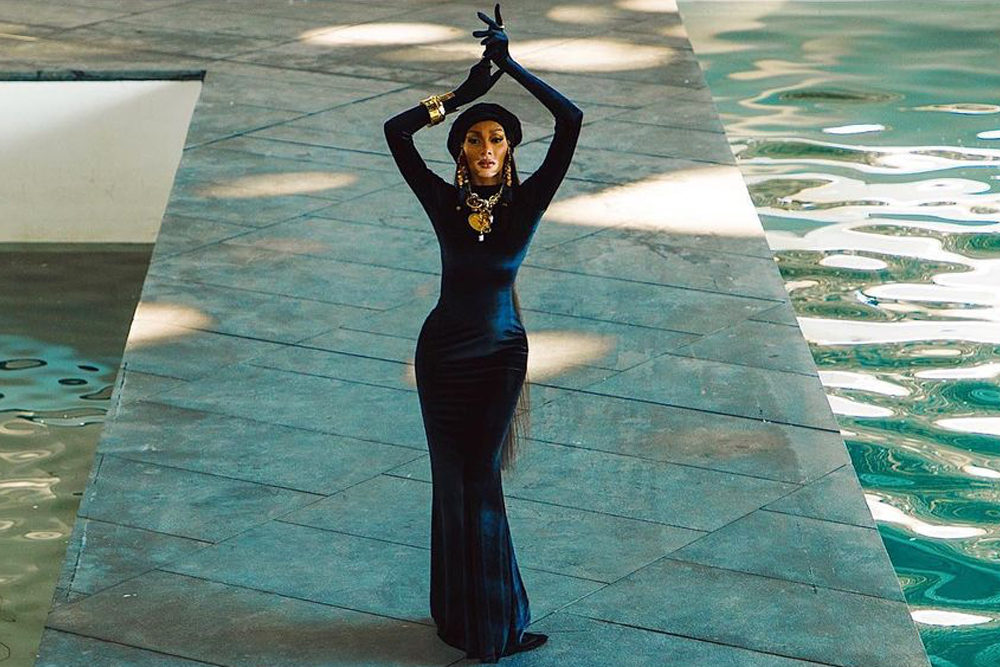 This week, the Canadian model Winnie Harlow was sighted in Abu Dhabi. The catwalk sensation appears to have had a busy week in the capital of the UAE, attending events like the Louvre Abu Dhabi and the Formula 1 Abu Dhabi Grand Prix.

The celebrity posted pictures of herself posing at the Louvre Abu Dhabi on Tuesday. The beauty quipped on Instagram to her 10.2 million fans, “I Louvre you too.” She wore an Omani Atelier Zuhra headdress and black form-fitting velvet dress, by designer Mouza Al-Awfi. Harlow enhanced the outfit by stacking heavy gold jewelry on her wrists and neck. Additionally, the floating dome structure and the museum’s mile-long beachfront were featured in clips she shared on her Instagram Stories.

The Abu Dhabi Grand Prix, which was held this past weekend on Yas Island, was also captured by Harlow and shared with her followers. She posed for pictures with Indian actor Ranveer Singh and Senegalese social media star Khaby Lame. Harlow sported a black sports jersey with green Swarovski crystals and matching black leggings with larger, more vivid crystals to watch the race. She added a green handbag and glasses as accessories to her outfit.

Harlow has visited the UAE before this year. The former “America’s Next Top Model” candidate travelled to Dubai in January. In a series of photos that Harlow shared, she can be seen posing in the desert while rocking a red cut-out gown and a matching scarf tied over her hair. The model was photographed in a collection of pictures posted on Instagram sitting on top of a camel, holding a falcon on her arm, and posing in the sand. She also uploaded a video of herself enjoying a date while listening to Arabic music.

The famed Turkish eatery CZNBurak hosted the Toronto-born model while she was there, and she was given personalized bread with her name on it.

Harlow is a mainstay on the red carpet and has posed for labels like Desigual, Diesel, Sprite, and others. She has also been featured in Cosmopolitan and Vogue Italia.