A historical moment in fashion 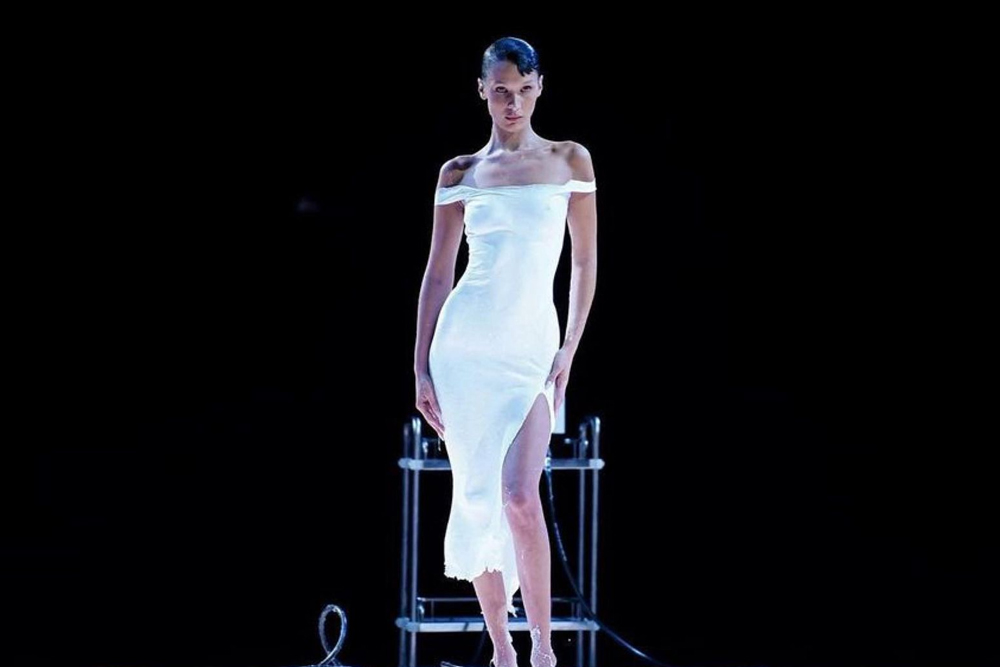 On Friday in Paris, Bella Hadid wowed the world as she walked onto the runway in nothing but her underwear and heels to get her dress spray painted onto her bare body.

Bella stood still as a team of three men spray painted her with Fabrican, a patented spray-on material that hardens into a wearable textile. They cleverly sprayed the thick white latex around her torso, gradually covering her with an opaque layer as she stood still. At the end of the process, a mid-length dress with a thigh-high slit and off the shoulder sleeves was formed and Hadid confidently walked off the stage to end the show.

For this look, the visionaries behind the cutting-edge Parisian fashion brand Coperni, Sébastien Meyer and Arnaud Vaillant, drove the limits of fashion technology by collaborating with Dr. Manel Torres, the creator of the Spray-on fabric.

The designers took their eccentricity a step further by creating a hologram from a video they had captured of a flower blooming using layers of biconvex fabric. Both the collection and Kylie Jenner, who sat in the front row, featured dresses made of the material. Before the show, the designers shared that “It’s an homage to women in general, and the evolution of the morphology and the body through centuries.”

Even without the futuristic components, there were plenty of wearable pieces in the collection that tapped into this season's boudoir trend with looks like negligees draped diagonally over one shoulder and slick cut jeans coupled with cropped bomber, trench, and corduroy jackets. Arnaud & Vaillant continued to trailblaze and created a version of their hand-blown glass ‘Swipe’ handbag fashioned with one kilogram of 18-karat gold after the success of the design last season. The gold will be melted down after the show. Beyond just how incredible it was to watch Hadid walk down the catwalk in her instant outfit, the same can be said for the garment, whose fabric may be reused after dissolving it.

The show in itself posed a lot of compelling questions about how technology will transform how we dress and how synthetic and recyclable textiles will completely change the game.

As for Bella, she took to her Instagram Story, sharing a video with the caption, “Will have no words until tomorrow…I will think of this moment forever.”