The half-Jordanian designer, who is helping bring the fun back to footwear, is behind the world’s hottest and most popular pair of women’s shoes… 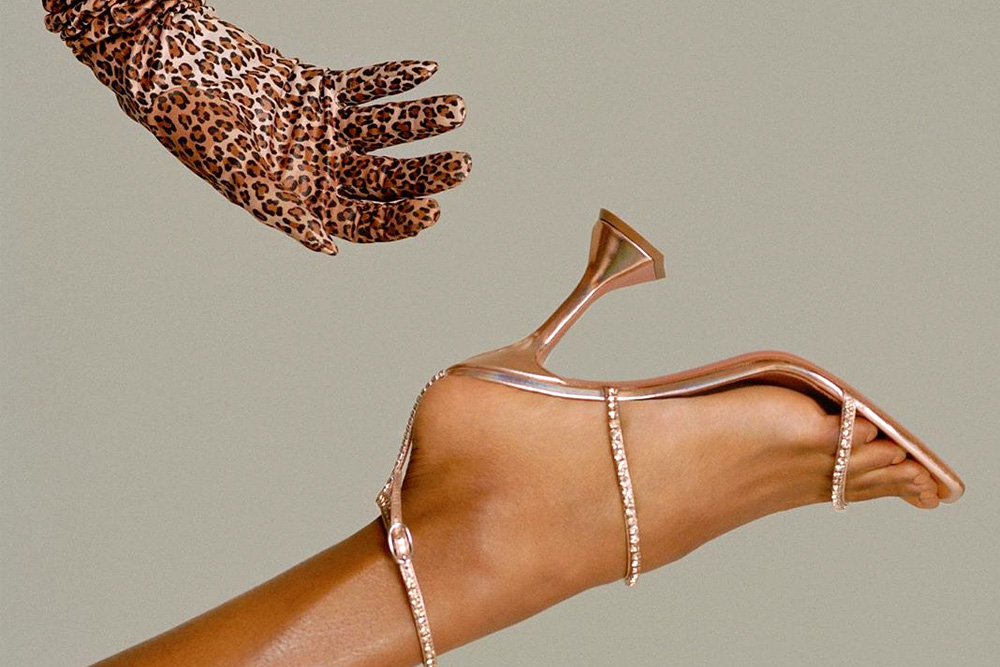 Amina Muaddi has certainly  been busy ticking off achievement boxes since she set up her eponymous brand in 2018. As well as her entire line selling out in just one day after launching, the Jordanian-Romanian shoe designer recently landed a freelance project with Rihanna’s Fenty label. Footwear News also named the effortlessly glamorous and cool Muaddi Designer of the Year 2019. And in her latest coup, Lyst named her Gilda the most popular shoe worldwide. The made in Italy crystal embellished sandal, which features the designer’s signature Martini glass-shaped heels, was the second most searched women’s product according to the Lyst’s fourth-quarter index. The design by Muaddi, who was featured in the index by the global fashion search platform for the first time, came in second to Gucci’s GG logo belt.

Lyst compiles data on over nine million consumers on a quarterly basis to help brands and shoppers get a better insight into the market. “The formula behind The Lyst Index takes into account global Lyst and Google search data, conversion rates and sales, as well as brand and product social media mentions and engagement statistics worldwide over a three-month period,” the report reads.

Queries about Muaddi’s products on Lyst rose by 73 percent during the last quarter, while searches for Gilda, named after the fashion insider’s friend and fellow designer-influencer Gilda Ambrosio of The Attico, averaged out at 60,500 per month from October to December.  The designer, who has gained widespread popularity among A-listers like Gigi Hadid, Dua Lipa Hailey Baldwin and Kendall Jenner, shared the exciting news with her Instagram followers, saying: “News like this never fails to surprise me. In May 2017 I left the first company I founded with nothing but my freedom and launched @aminamuaddiofficial in August 2018. This is a 100% ethnic minority female owned luxury company I started a year and a half ago. Thank you for your incredible support, it means the world!!!”

The chic 33-year-old, who co -founded and later left the brand Oscar Tiye, has unquestionably shaken up the shoe world in a very short amount of time. Just months after launching her namesake label, she got the Launch of the Year nod from Footwear News and the only way has been up. As well as her kick-flare heel, which has “the femininity of a thin stiletto heel but also the comfort of a platform,” Muaddi is known for her vibrant colours and holographic designs. Dotting her footwear with details like crystals and feathers also adds to the brand’s sensual and playful party wear aesthetic.