Can We Talk About the Stunning Looks at Rihanna’s 5th Annual Diamond Ball? 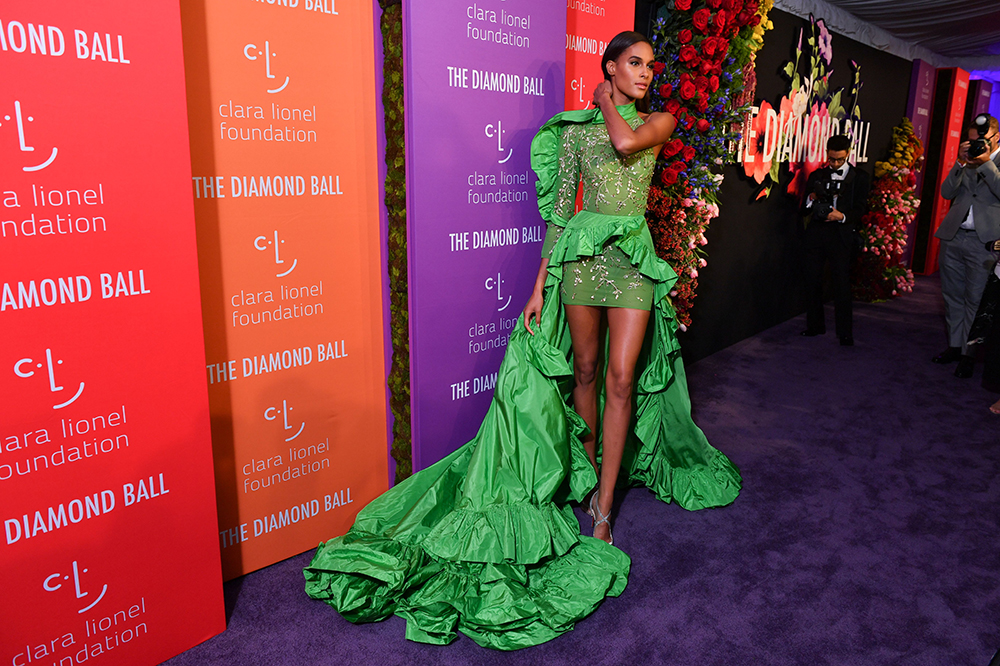 It’s that time of year again when Rihanna steps out to host one of the most anticipated events of the year. We can safely say that the savvy entrepreneur has had quite the busy year, first being dubbed as the first woman to head a fashion house under LVMH, holding the Savage x Fenty fashion show that will be streaming on Amazon Prime Video on September 20, and now throwing this star-studded mega event for the Clara Lionel Foundation. 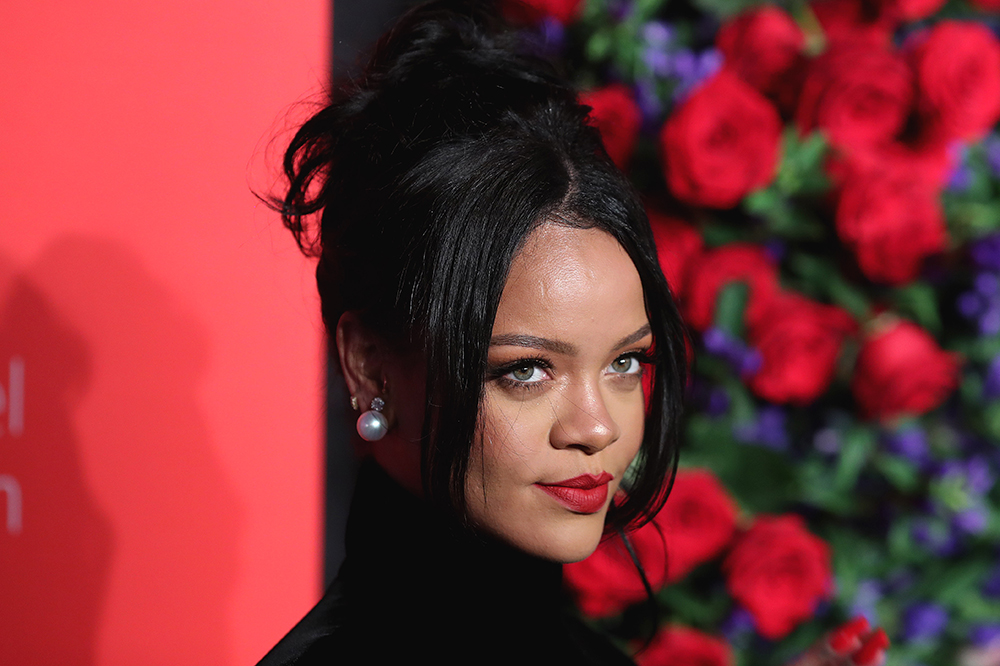 For those who are not familiar with the annual happening, the Diamond Ball raises awareness on imperative happenings around the world, and aids impoverished communities across the globe with education, healthcare, arts, culture, and other various programs. How brilliant is the fact that Rihanna manages to combine fashion, charity, and social awareness every single time she embarks on a journey? Her Fenty Beauty foundation shades boasted of multipe inclusive colors to match every single skin tone, her Instagram feed never ceases to contain provocative and politically-charged posts that challenge unjust events, and now this inspirational woman is here again to give us a night full of glamour, couture, and philanthropy. Benevolence never goes out of style.

With the red carpet witnessing quite some stunning action, here are our favorite looks varying from models, artists, and other public figures. 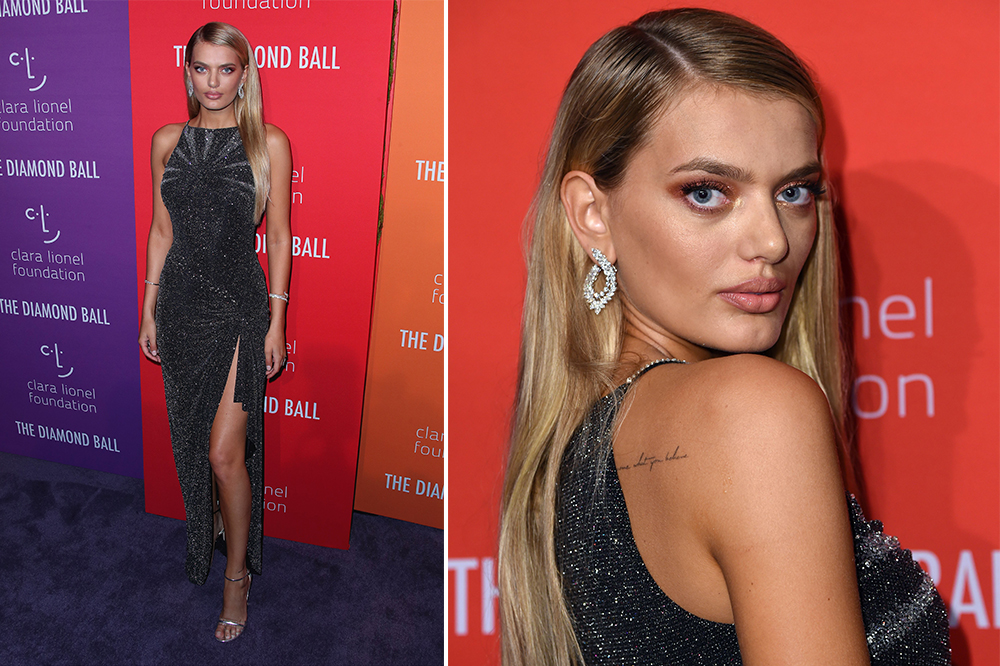 Let’s start it off with Dutch beauty, Bregje Heinen, who was wearing a shimmering number by Moscow-based Ulyana Sergeenko. The long dress’ fit is gorgeous and simple, and the slit accentuates the former Victoria’s Secret model perfectly. She was styled by Amarsana Gendunova who has also worked with the likes of Romee Strijd. Bregje wore her hair in a sleek do, with a side part given to us by hairstylist Cameron Rains. Her makeup, by Misha Shahzada, followed the same 'simplicity is beauty' mantra she had going on, as light bronze eyeshadow and a nude lip color adorned her face. 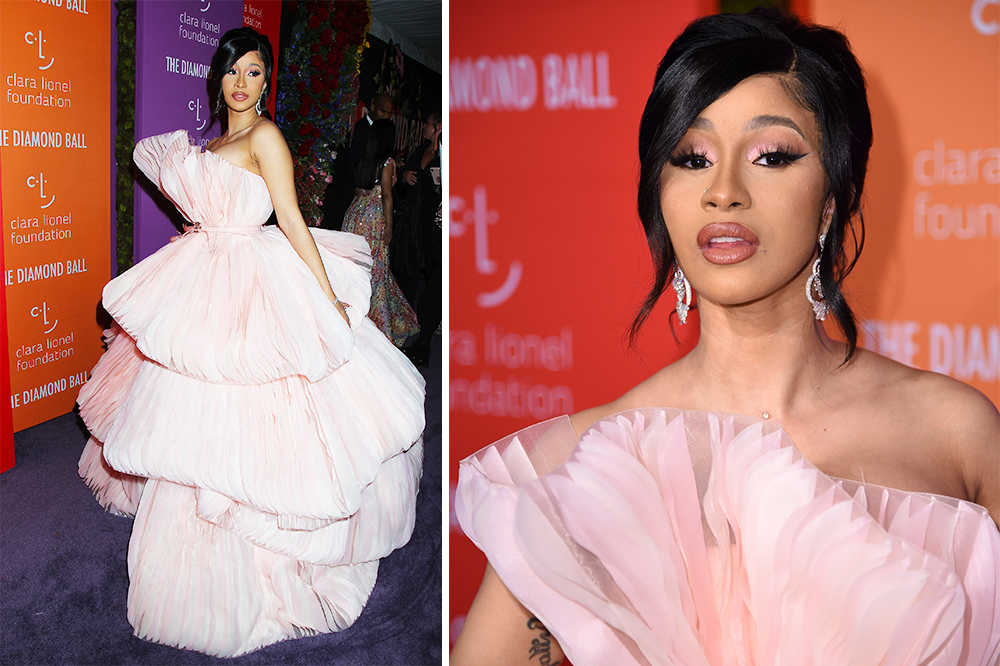 Cardi B wore a magnificent gown by stellar Lebanese fashion designer Georges Hobeika, made to match her larger than life personality. The ruffles were stacked on top of each other to create the voluminosity, and were cinched just right at the middle to emphasize her waist. The princess look was styled by Kollin Carter, and an updo was in order by hairstylist Tokyo to match the regal guise. Her makeup boasted of pink hues and a nude glossy lip color, by Erika La’Pearl, who also happens to be Cardi’s longtime go-to makeup artist. 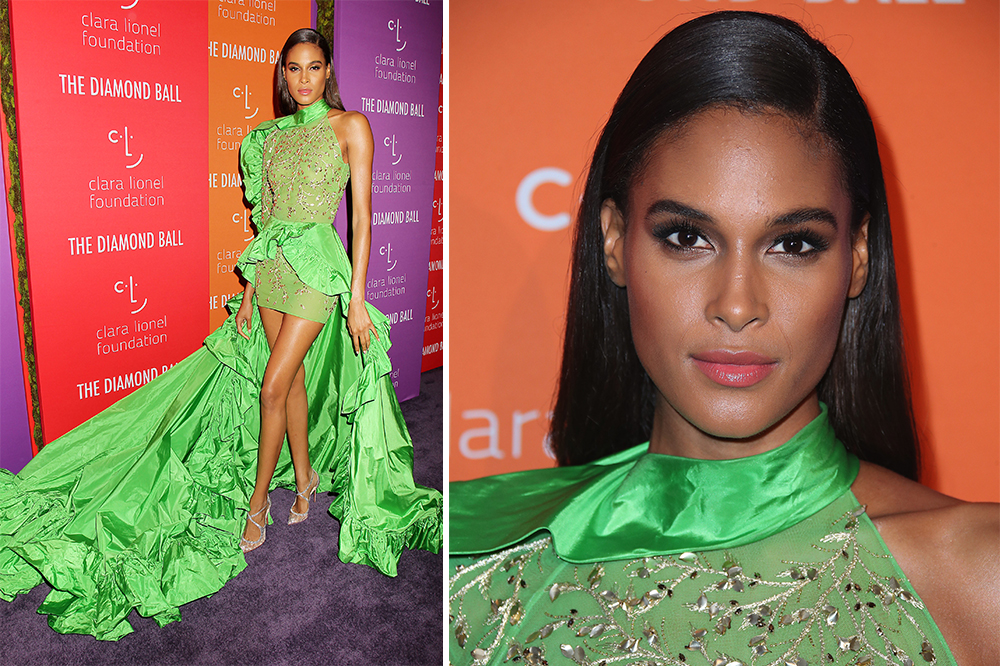 A personal favorite look of ours, the exquisite Cindy Bruna chose to go for a train dress by none other than genius Lebanese fashion designer Rami Kadi. Styled by Mickeal Carpin, the magnificent number’s base is a vibrant green one-shoulder mini-dress embroidered with gold metal sheets to resemble intertwined vines. The train is attached to the supermodel’s waist and gradually flows onto the ground in the form of cinched ruffles. Her makeup bore a neutral visage as she donned cat-eye liner, a matte bronze visage, and a glossy lip by MUA Aloni. 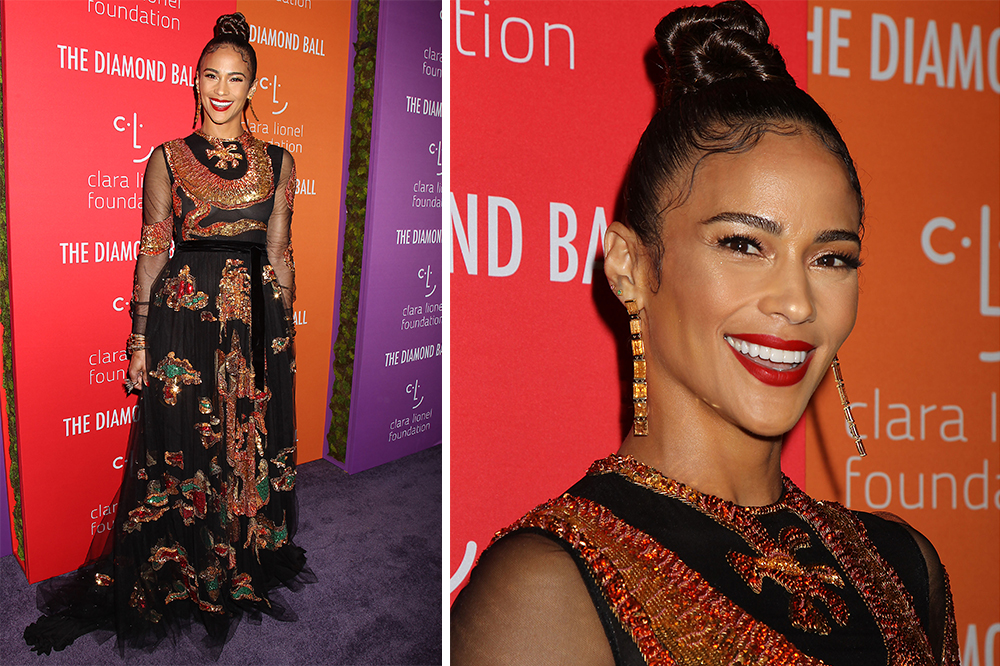 One of Pierpaolo Piccioli’s masterpieces for Valentino this season was this embroidered fiery dress worn by the brilliant Paula Patton. The gown is so glorious that only Michael Silva could create a hairdo to match it. Patton’s hair was tied up in an interlaced high bun and slick baby hairs styled to perfection. MUA Jessica Smalls did the actress’ makeup with effortless eye action, and a bold red lip to spice things up a bit. 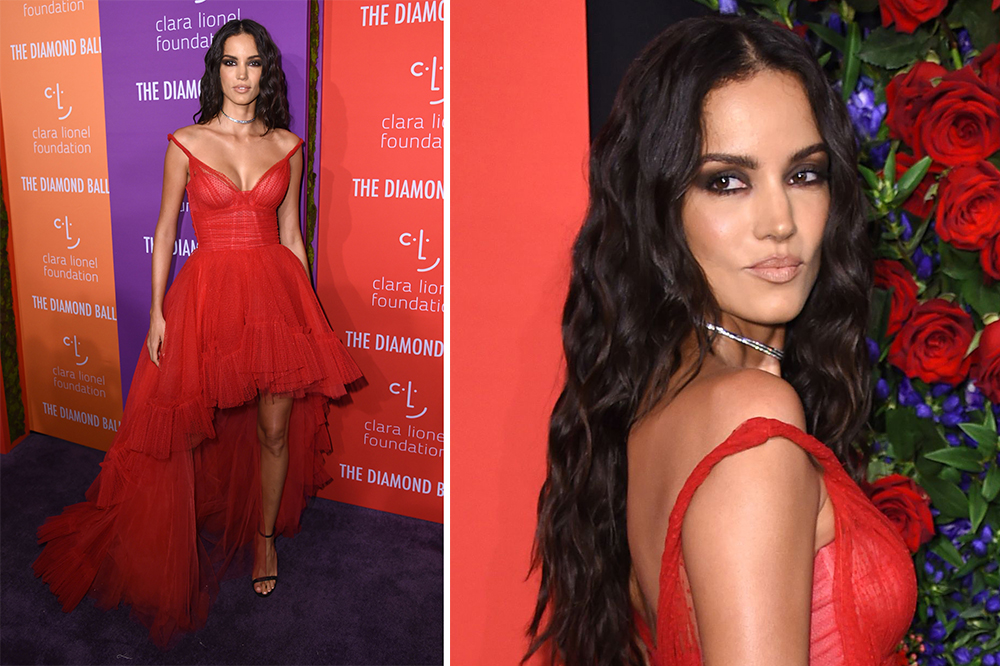 Short in the front and long in the back seems to be hot on the red carpets this year, and who other than model Sophia Resing to work that trend to a tot. The red ruffled Gustavo Cadile gown was styled by Kristina Askerova, while her wild‘n’wavy mane along with the smokey killer eyes were by Babi Moura. If we ever wanted to frolic through the woods while a camera crew tailgates us to capture the next big fashion campaign, we’d definitely pick this fun, flirty look. 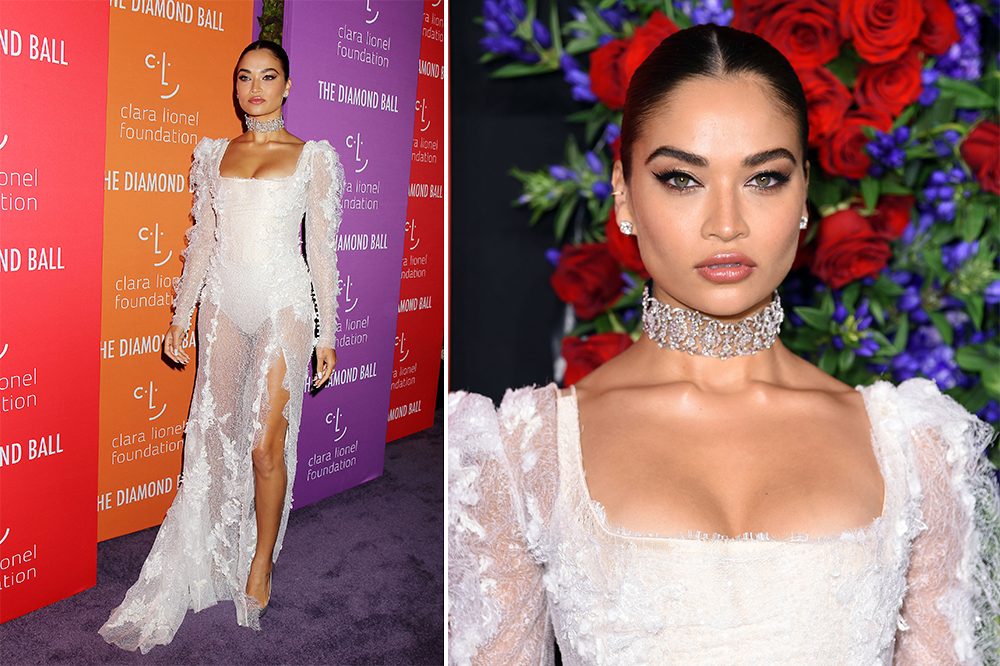 Another one for the Russian designer Ulyana Sergeenko, and this time it’s everyone’s favorite half Saudi supermodel Shanina Shaik. Stylist Dani Michelle chose this embellished white body suit with a sheer organza cover-gown for the stunner who came out resembling a literal angel. Her hair-do was styled up in a half-parted hair bun by hairstylist Benoit Moeyaert, and her sharp winged liner was brought to us by MUA Carolina Dalí-Trites. A stunning Lorraine Shwartz diamond choker bejeweled Shaik’s neck, and brought the beautiful look to ultimate completion. 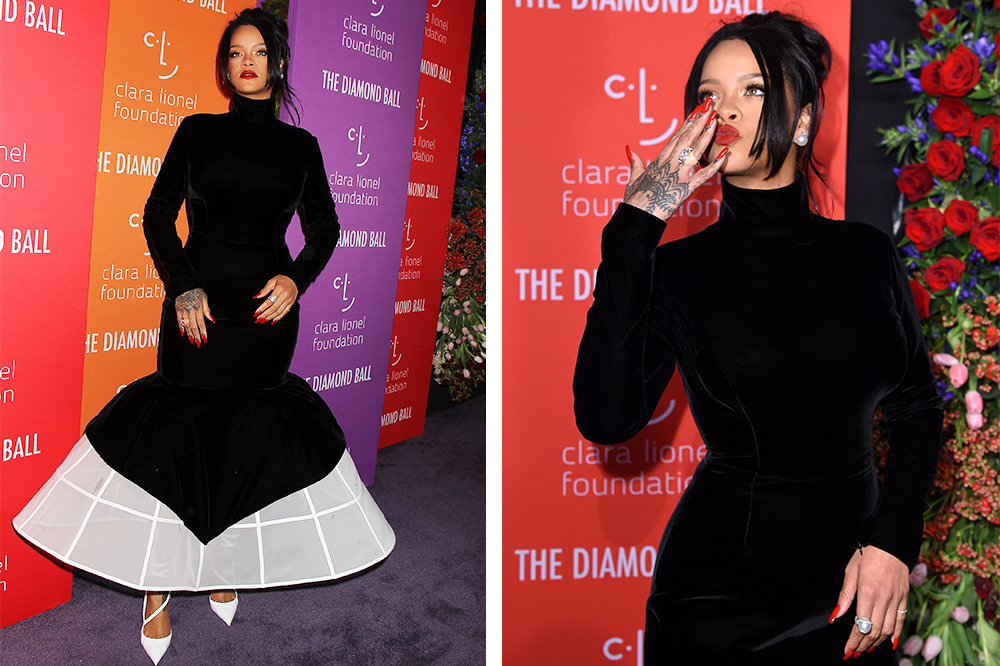 Last, and definitely not least, the woman of the hour channeled 1960s glam in her Givenchy velvet couture dress styled by her longtime stylist Jahleel Weaver. Her hair definitely had the era’s magic, as she stunned in an up-do with a couple of tasseled hairs around her face. Repping her Fenty empire, the celebrity wore the white Date Night heels from her Fenty line, and rocked Fenty Beauty Stunna Lip Paint in Uncensored. Imagine being one of the busiest public figures in the arena, still having time to fight for quality of life for destitute communities around the world and be looking this good. That’s Robyn Rihanna Fenty, for you.