Take a trip down memory lane as we revisit the most famous weddings of celebrities past. 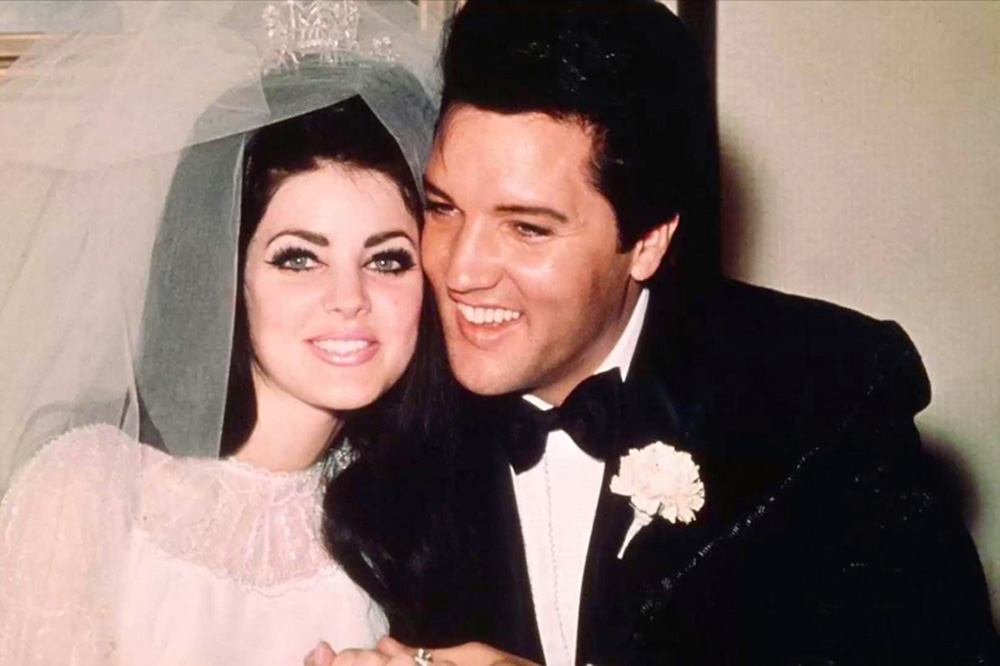 Dripping with glamour, sophistication and style, these famous faces from the 20th century walked down the aisle in weddings that have stood the test of time. Decades later, we are still counting Grace Kelly, Elizabeth Taylor, Audrey Hepburn, Jackie Kennedy and Priscilla Presley among the most beautiful brides in history.

Elizabeth Taylor – 1950
The press was abuzz in 1950, when a then 18-year-old Elizabeth Taylor walked down the aisle (for the first time) with her husband, Hilton hotel heir Conrad Hilton, Jr. 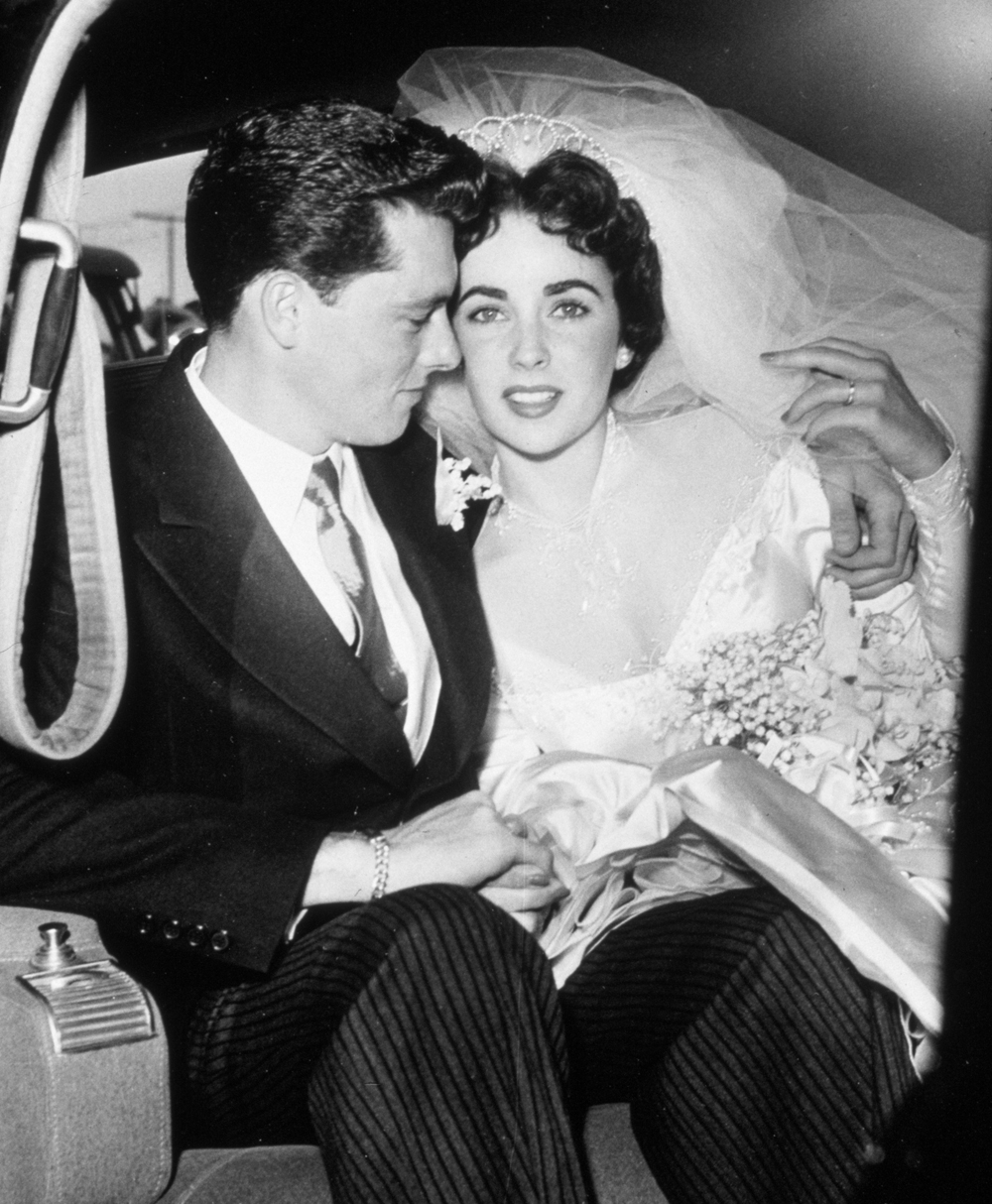 Wearing a cream-coloured satin gown encrusted with pearls, the bodice featured a built-in corset that cinched the violet-eyed starlet’s already tiny waist. Hundreds of famous guests watched as she exchanged vows with her new spouse, including Gene Kelly, Ginger Rogers and Fred Astaire. 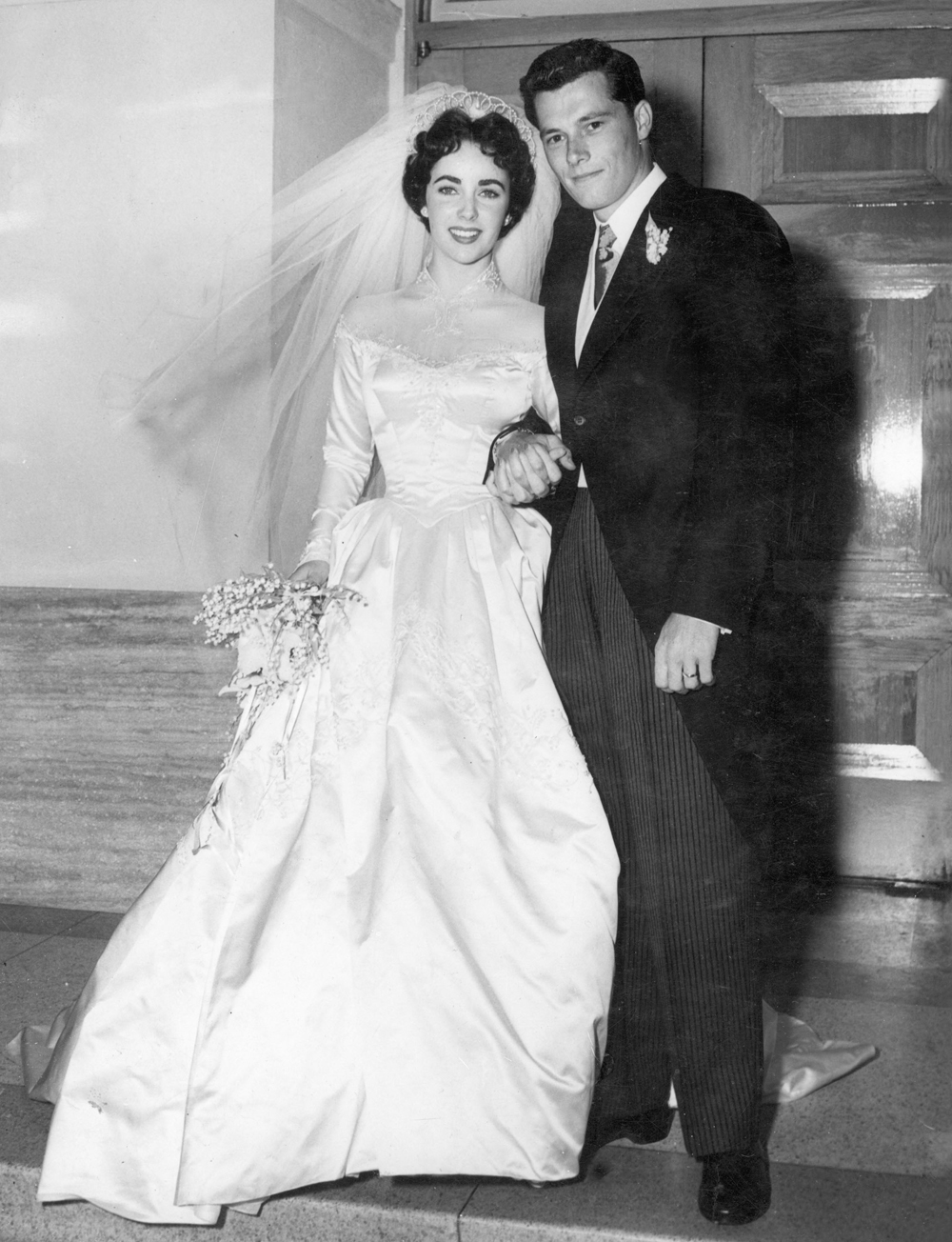 It was certainly an affair to remember, but unfortunately, the marriage only lasted a few months. The dress, however, is still a hot commodity, fetching $186,931 at a Christie’s auction following Taylor’s passing in 2011 at the age of 79.

Grace Kelly - 1956
Epitomising old Hollywood glamour, nothing spells ‘storybook wedding’ more clearly than Grace Kelly’s nuptials with Prince Rainier of Monaco. It is no wonder that it was dubbed the ‘wedding of the century’. 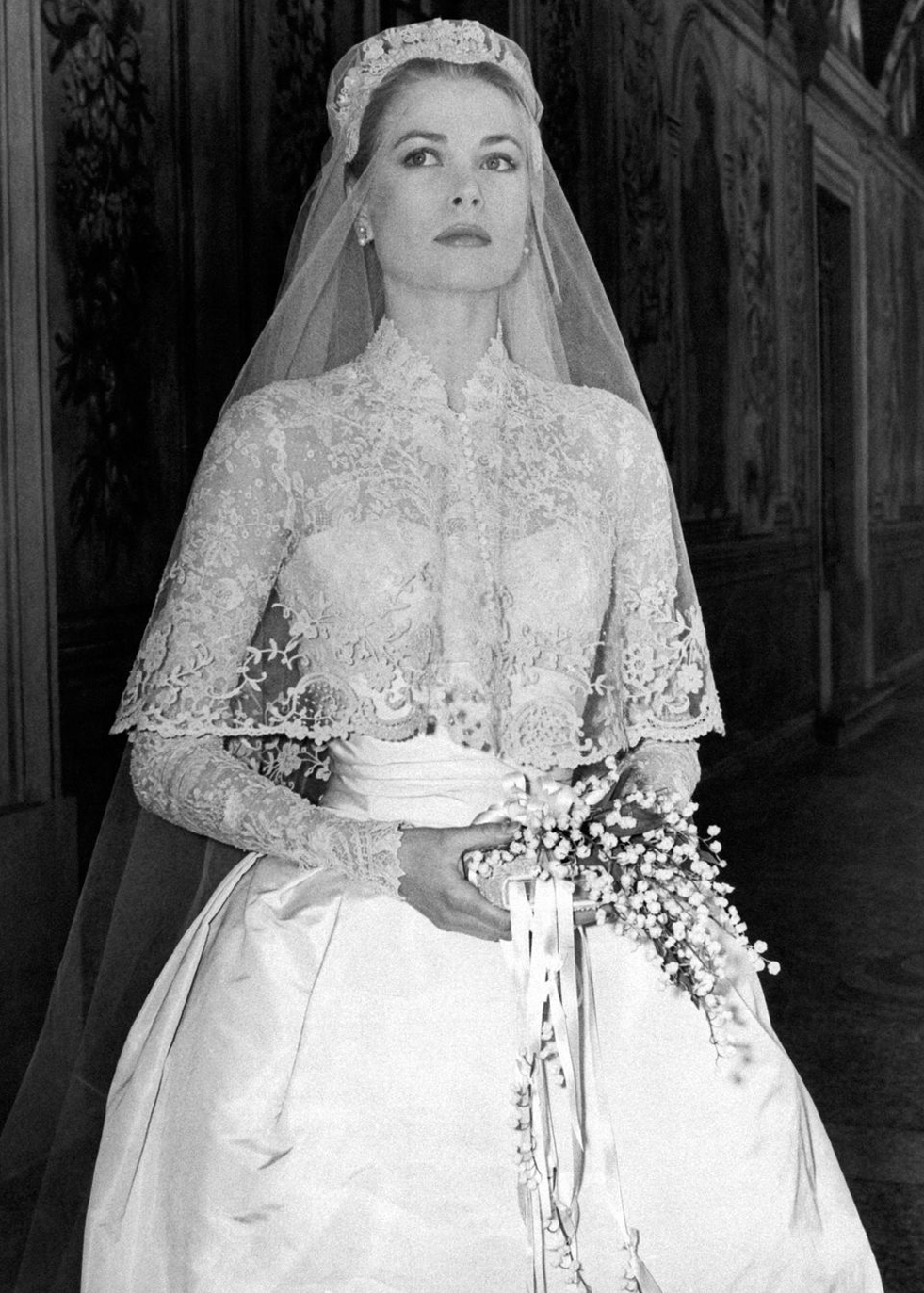 In 1956, the Oscar winning actress and muse of Alfred Hitchcock walked down the aisle at a cathedral in Monaco wearing one of the most memorable wedding dresses of all time, designed by MGM costume designer Helen Rose. 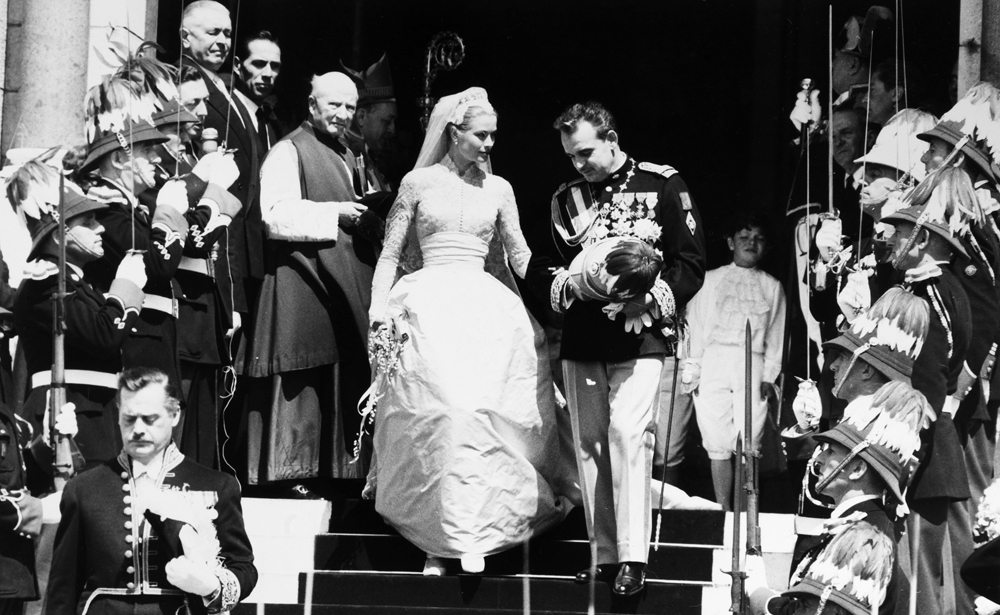 It went on to inspire other gorgeous gowns, including Kate Middleton’s unforgettable Alexander McQueen creation. The royal gown featured a bell-shaped taffeta skirt, with a delicately embroidered bodice. A tastefully high neckline, long sleeves and elegant train finished off the masterpiece of design. Tragically, Princess Grace died in a car accident in 1982, after 26 years of marriage to her prince.

Jacqueline Kennedy Onassis – 1953
Better known as Jackie Kennedy (and later, Jackie O), the future US First Lady made national headlines when she wed future US president John F. Kennedy in 1953. And the beginnings of a fashion icon were made. 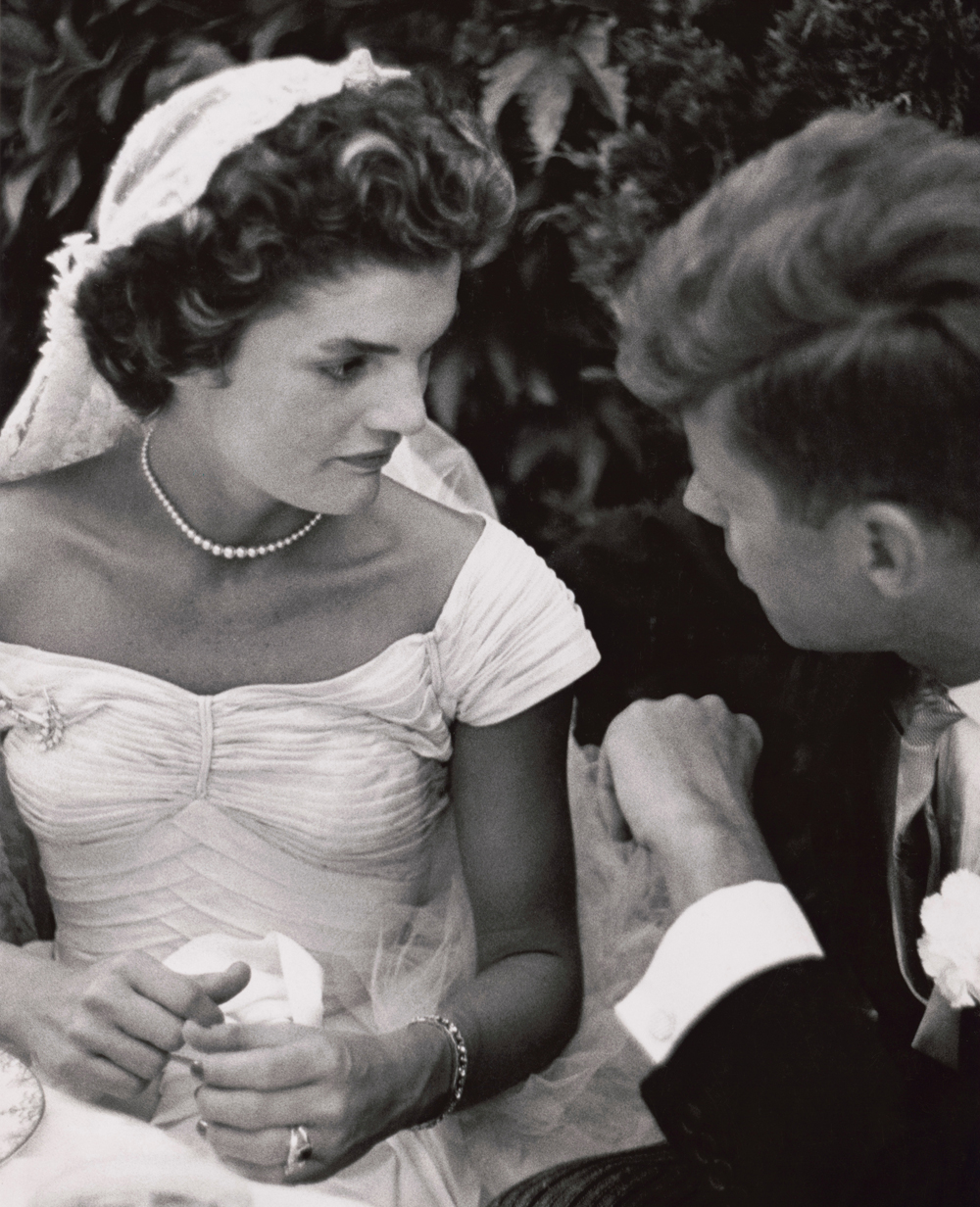 She wore a flowing ivory gown made of silk taffeta, which was designed by Ann Lowe. It featured a portrait neckline with a cinched waist. She also donned a family heirloom veil that had originally been worn by her grandmother. 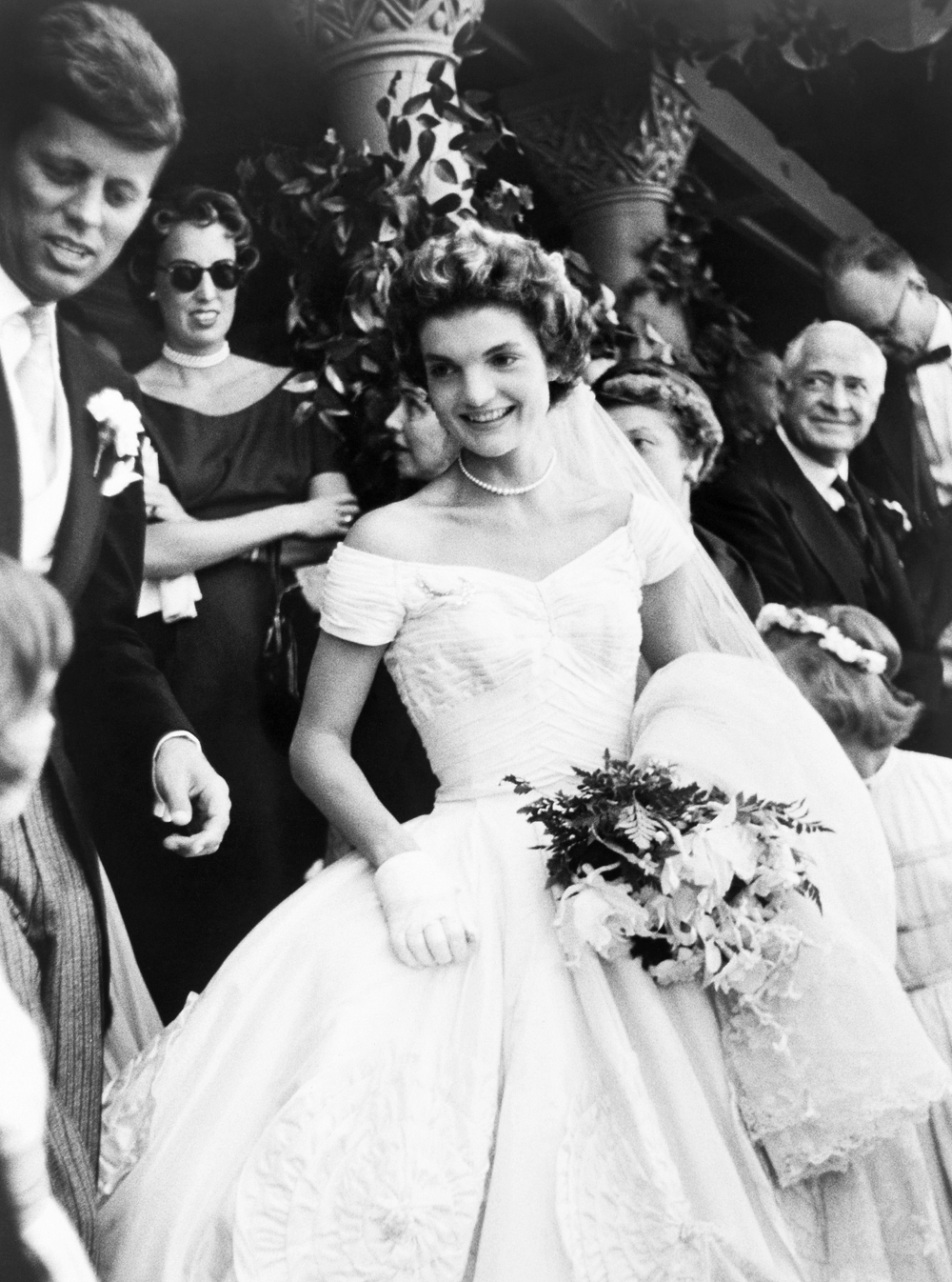 Kennedy went on to become one of the most formidable trendsetters of the 20th century, with everyone across the globe mimicking her trademark style: pillbox hat, three-quarter length sleeves and long white gloves. Unfortunately, Jackie did not get her happy ending – her husband, President Kennedy was assassinated in 1963 and she passed away from cancer in 1994.

Audrey Hepburn – 1954 & 1969
Nobody did style and elegance quite like Audrey Hepburn. She was a fashion inspiration for many, and continues to be to this day. 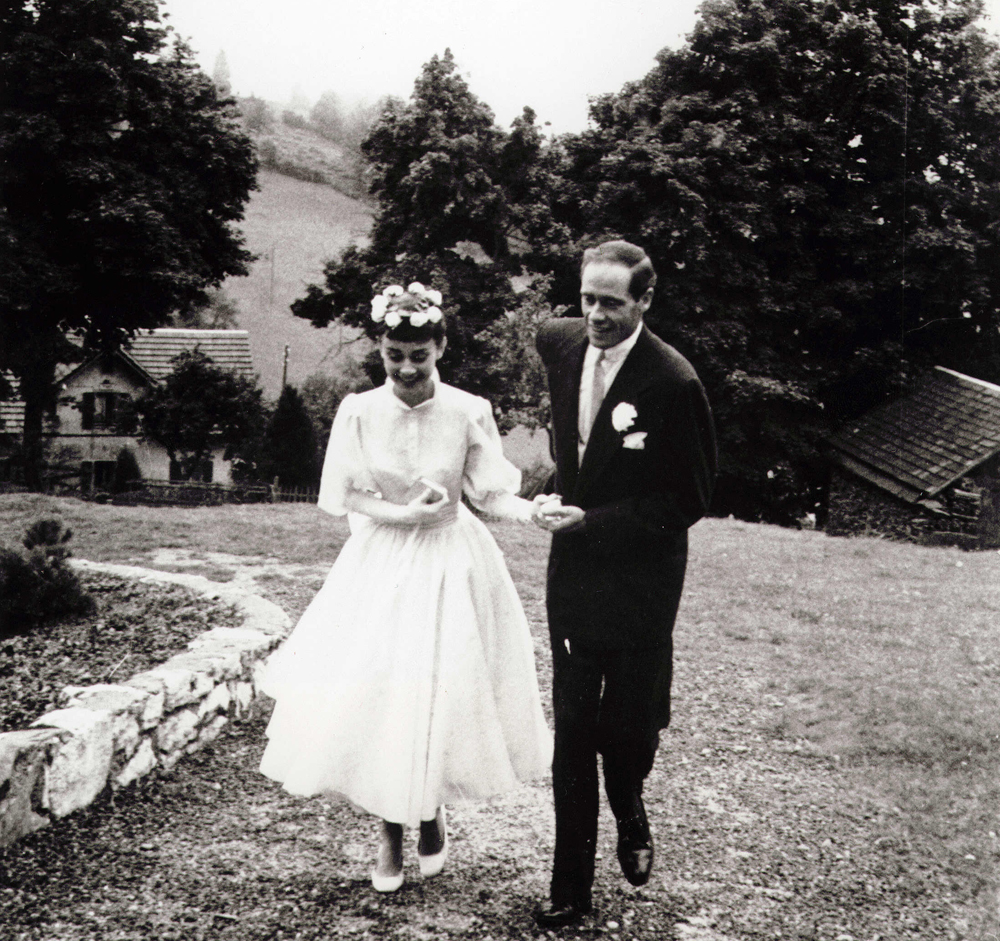 For her first marriage to fellow actor Mel Ferrer in 1954, the lovely star of “My Fair Lady” and “Roman Holiday” wore a dress designed by Balmain. It featured a tea-length skirt, cinched-in waist and wide chiffon shoulders. Instead of a veil, the bride wore a romantic wreath of flowers in her hair. 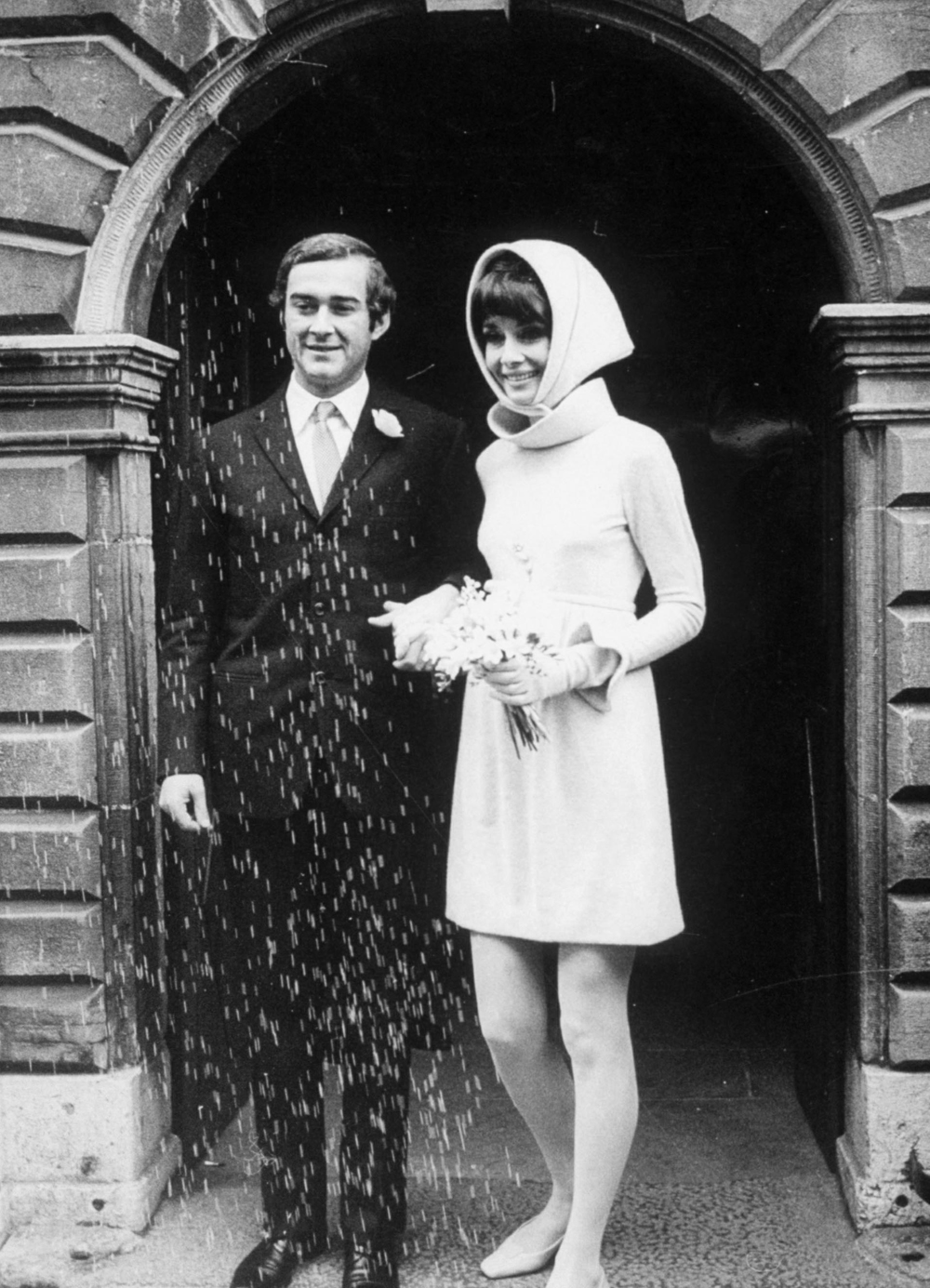 Although the marriage did not last, Hepburn got remarried in 1969 to Andrea Dotti. This time around, she wore a short pink, wool dress designed by her friend Hubert de Givenchy. She memorably topped off the look with a matching scarf, which went on to become one of her signature looks.

Elizabeth Taylor (again) – 1964
With eight marriages and a high profile celebrity image, it seems only fitting that Taylor be featured on this list twice, this time for her marriage to fellow thespian, Richard Burton (the first time). 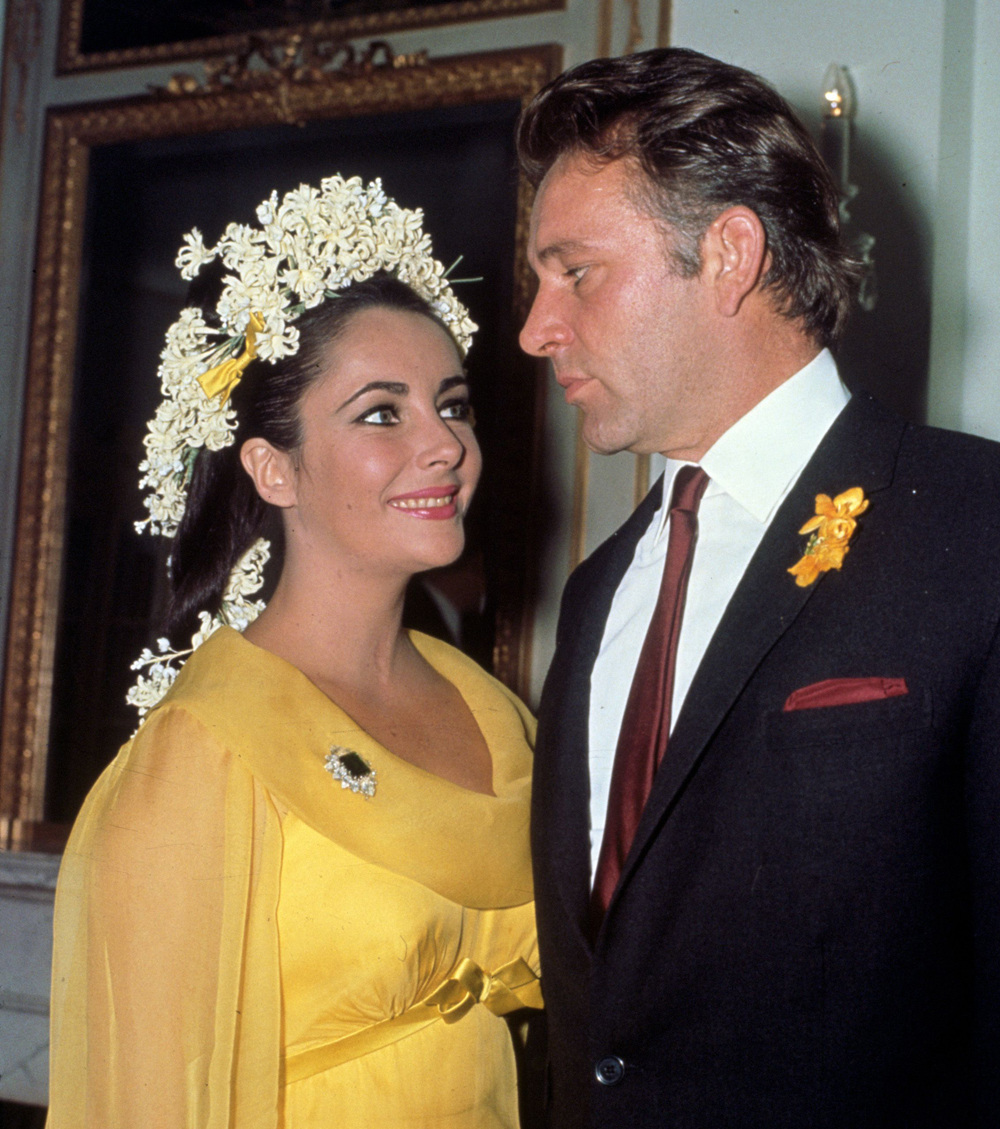 After meeting on the set of their film “Cleopatra”, Taylor and Burton became inseparable and one of the most talked about celebrity couples ever. Although both were married at the time (she to fourth husband singer Eddie Fisher), they left their respective partners to swap vows in a mellow ceremony three years later in Montreal. 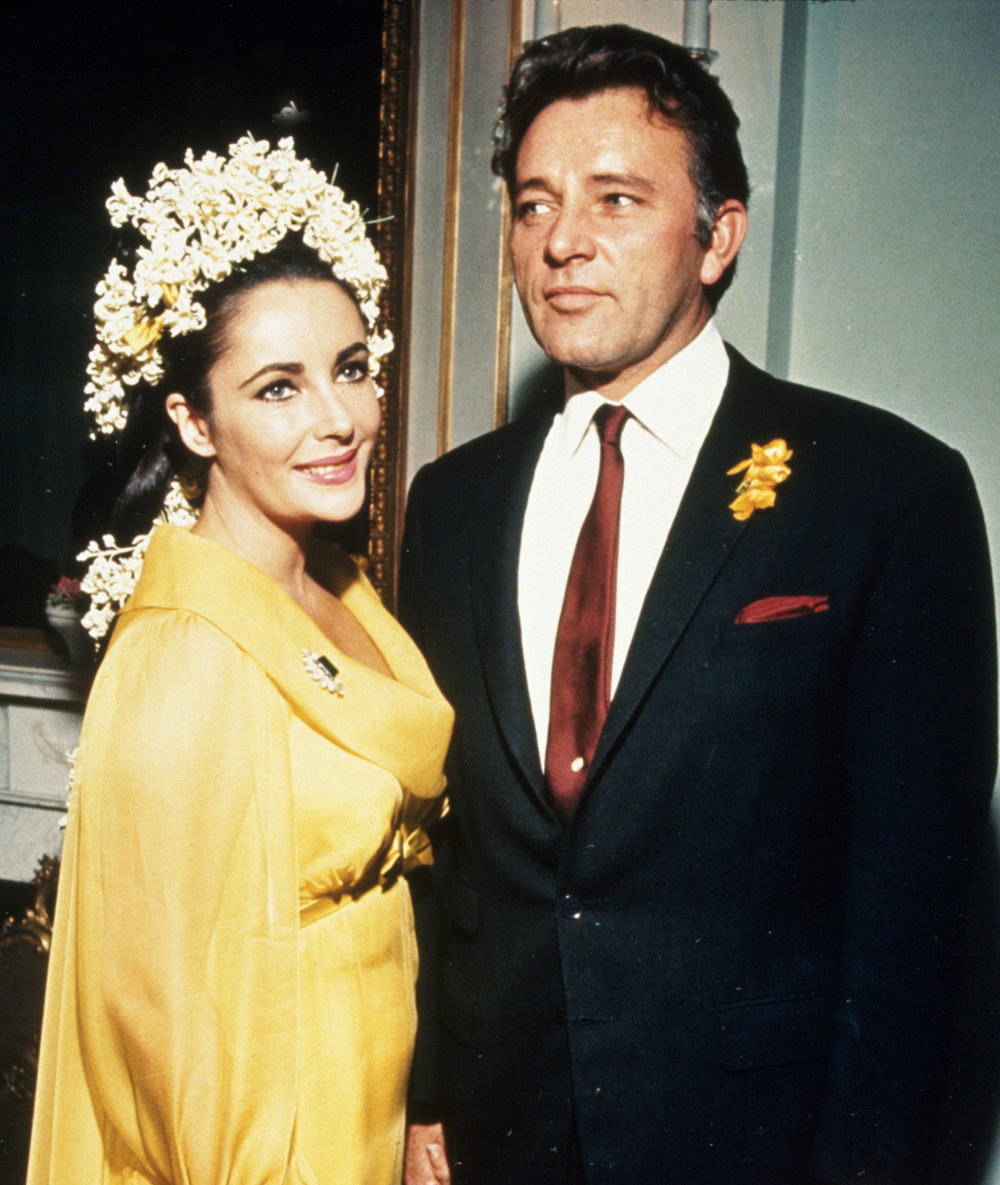 In addition to the giant platinum, 18.61-carat emerald Bvlgari pendant surrounded by diamonds, Taylor also donned a yellow chiffon gown with an empire waist, with lilies of the valley and white hyacinths adorning her hair. She looked every bit the movie goddess, but alas, the marriage did not last and the couple divorced in 1974 (the first time; 1976 the second).

Priscilla Presley – 1967
Perhaps the most controversial couple on this list, Elvis and Priscilla married in 1967, seven years after they first met. She was just 14 years old when they locked eyes for the first time when he was a US army private, and not everyone was supportive of their relationship, not even her parents. 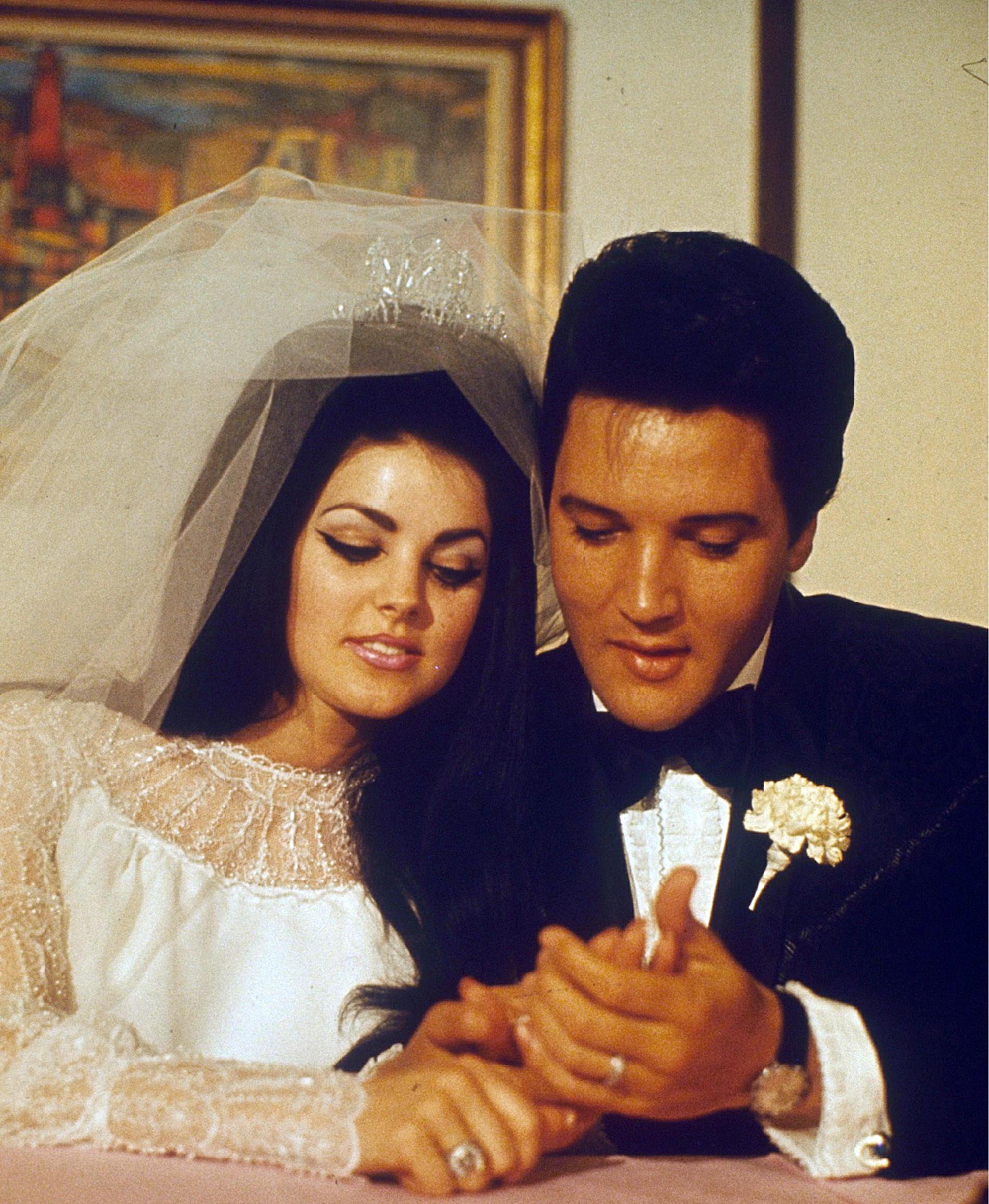 But, eventually, he grew on them and the two wed in a hyped up ceremony that, unsurprisingly, made headline news. It’s not everyday that the King of Rock and Roll ties the knot, after all. In typical 60s style, Priscilla wore a white silk, chiffon dress with a three-foot tulle veil, complete with a bouffant hairdo and thick, black eyeliner. 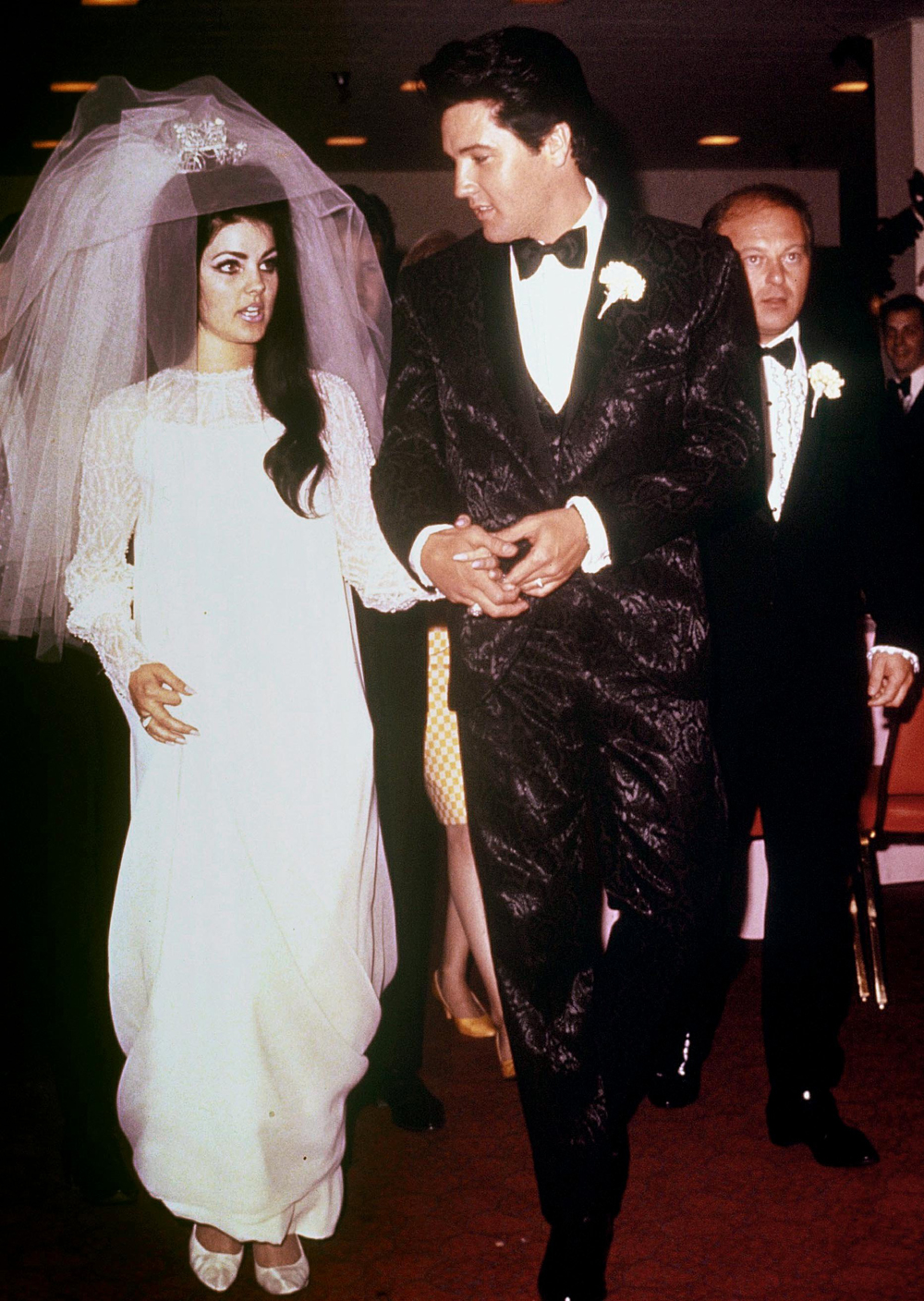 Always the star of the show, Elvis was as equally dazzling in a black brocade silk tuxedo and extravagant bowtie. Despite all the hype, the marriage didn’t last, five years and one daughter later, the couple separated.