World's Biggest Hotel To Open In Mecca This Year, And It Looks Amazing

Start saving up, because Mecca is getting a new hotel that redefines luxury. The Abraj Kudai will be the biggest hotel in the world, with 10,000 bedrooms. The current record-holder, MGM Grand, only has 6,198 rooms. But the Abraj Kudai doesn’t just treat its guests like royalty – it will have five whole floors specifically reserved for royal guests.

The record-breaking hotel is being funded by the Saudi Arabian Ministry of Finance, and will cost around $3.6 billion to build. It was designed by Dar al-Handasah and London design company Areen Hospitality will decorate its interior.

The building will have 12 towers reaching 45 stories into the sky, with helipads (yes, it has more than one helipad). The design was inspired by the traditional desert fortress, with towers on a podium surrounding a central building. 10 of the towers provide four-star accommodations, and the other two give the full five-star experience.

The building’s base will have food courts, a shopping mall, a bus station and a convention center. In total, the hotel will have 70 restaurants, so you could eat every meal at the hotel for 23 days without going to the same restaurant twice – but you’d probably have to visit the gym just as often.

It will not only be the world’s largest hotel, but will also have one of the world’s biggest domes on its top. It will be located about a mile south of the Grand Mosque, perfect for pilgrims and visitors.

With millions of people visiting Mecca every year, big hotel chains like Hilton and Hyatt are looking to expand to the city. Still, it would be a challenge to outdo Abraj Kudai – the hotel will span 1.4 million square meters, so it’s practically a five-star city. We just hope we get a map when we check in! 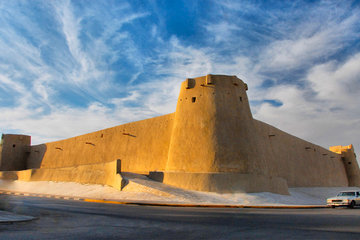