From rainbow-inspired pieces to bedazzling shoulder-dusting earrings, these trends will make you want to time travel to next autumn. 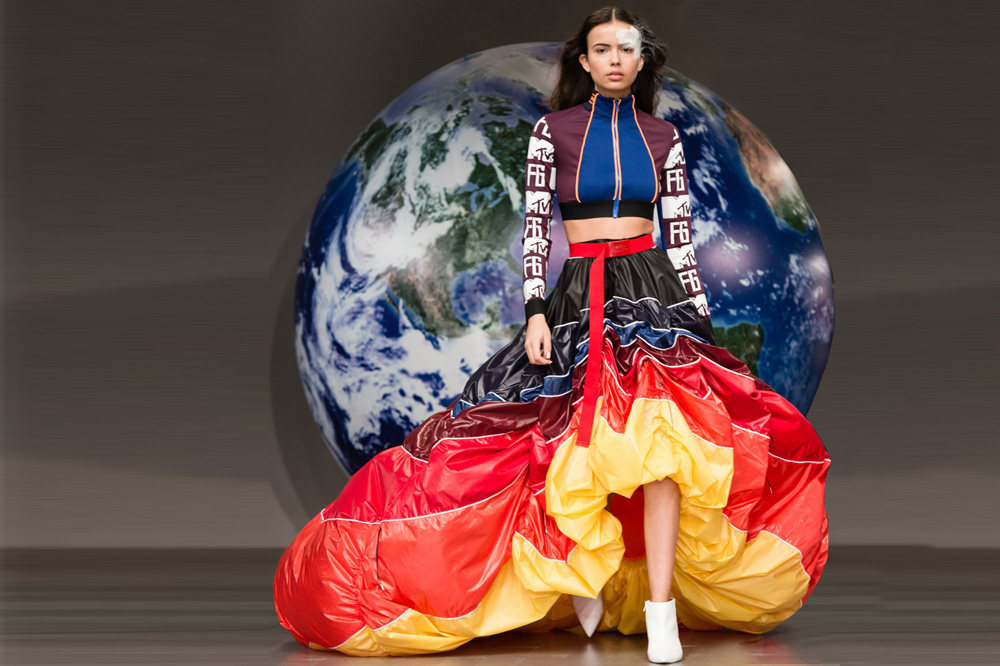 Highlights at London Fashion Week (LFW) included the Queen sitting front row chatting with fashion royalty, Anna Wintour, at the Richard Quinn show before she presented him with the inaugural Queen Elizabeth II Award for British Design. We also saw striking Model of the Year Adwoa Aboah dominate the runways and give a moving speech thanks to her new position. She is the British Fashion Council’s positive fashion ambassador for model health and diversity. And while Christopher Bailey’s show wowed us with an uplifting kaleidoscope of colours, we couldn’t help feeling blue about it being his final Burberry bow.

Plus, of course, there was a whole lot of that experimental fashion the city is known for. As well as letting us feel the love, with Anya Hindmarch’s 29 inflatable balloons soaring over the city’s landmarks, London, as always, reminded us to crave the cool. Here are four trends we picked up from the fash pack during the five-day extravaganza.

Colours of the Rainbow 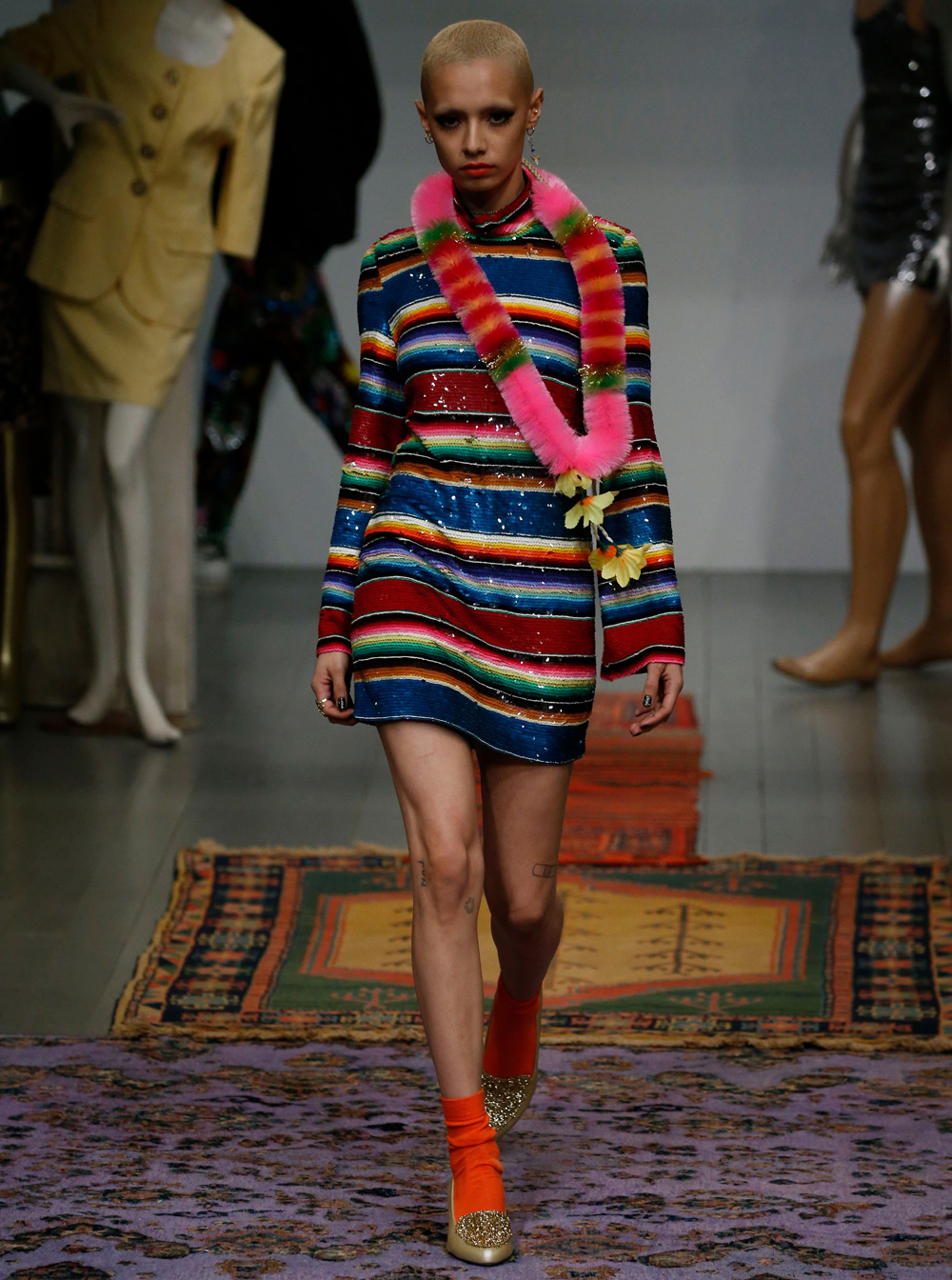 It’s comforting to know we’ll be able to beat the January blues next year with a most uplifting trend, rainbow stripes. Christopher Bailey proved he’s the king of kaleidoscopic colours during his last Burberry show, which supported charities devoted to LGBTQ+ rights worldwide. He presented the rainbow motif on everything, from bags, puffer jackets and woolly hats to the faux fur Cara Delevingne modelled for the dramatic finale. Indian designer Ashish Gupta didn’t let us down either by continuing his multi-colour dress tradition. His diverse cast of models, including Adwoa Aboah, dazzled in an explosion of sequins. J.W. Anderson also had us gawking at elegant silk dresses featuring sequinned rainbow sunsets. We spotted diagonal rainbow stripes at Fyodor Golan too. 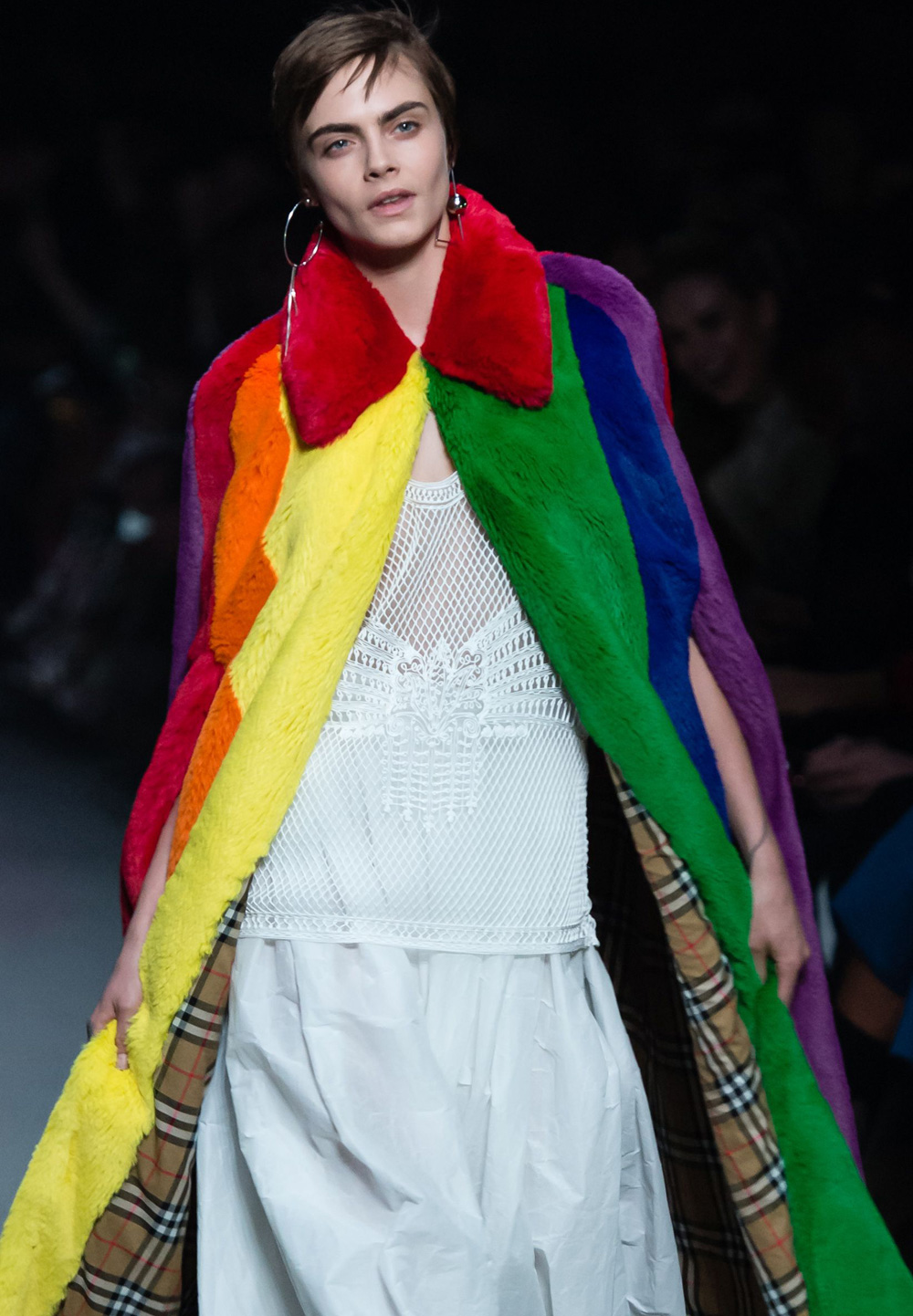 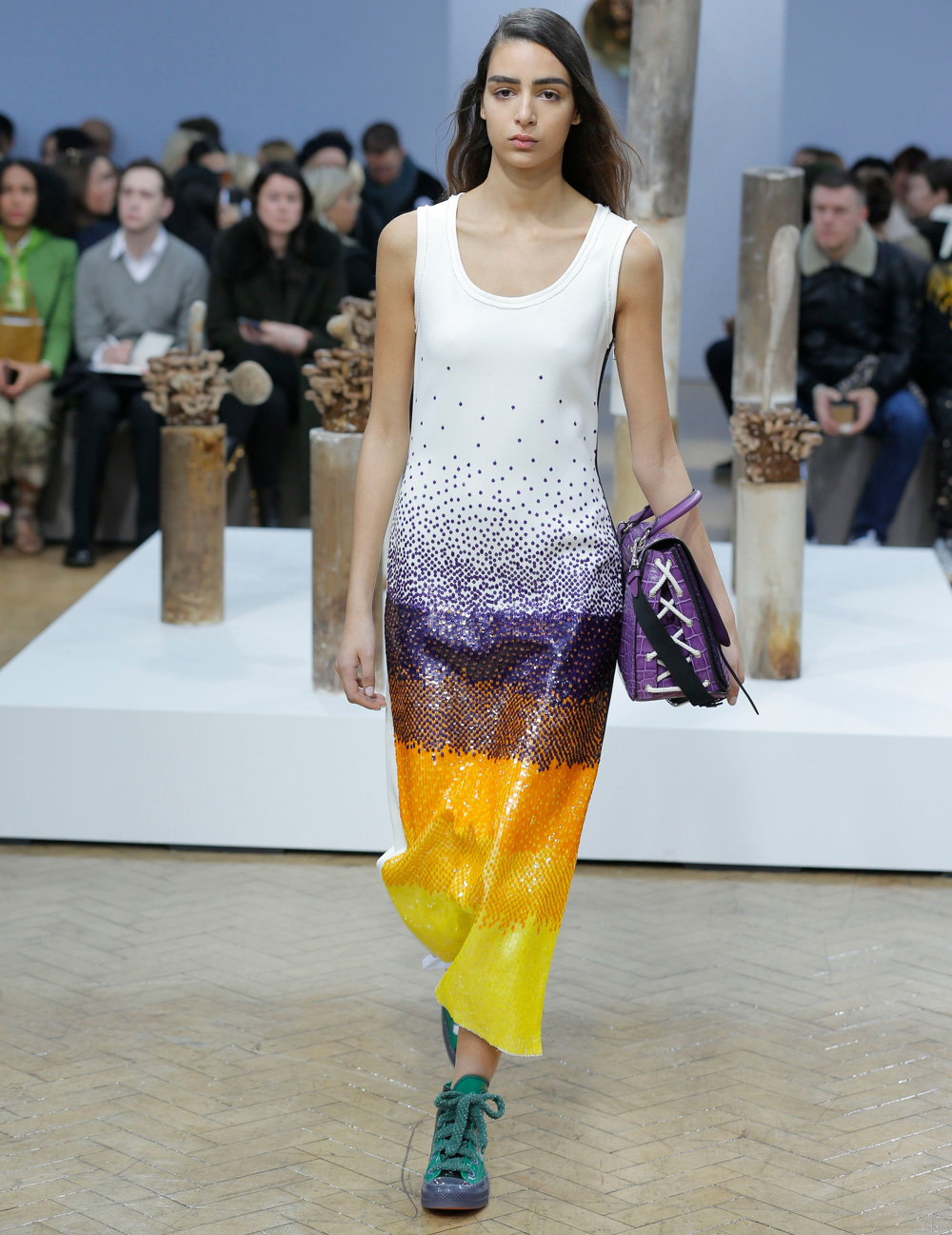 Another big story was colour blocking and mixing and matching unexpected colours. Jasper Conran offered us oversized knits and midi skirts in clashing colours, while another designer to join the spectral bandwagon was Richard Malone. He showed riding jackets and checked tabards in vibrant blues and purples. There really was an outburst of colourful surprises throughout the week, with a palette that included a pungent yellow-green, a bright, bold and dramatic pink and Pantone’s colour of the year, Ultra Violet. 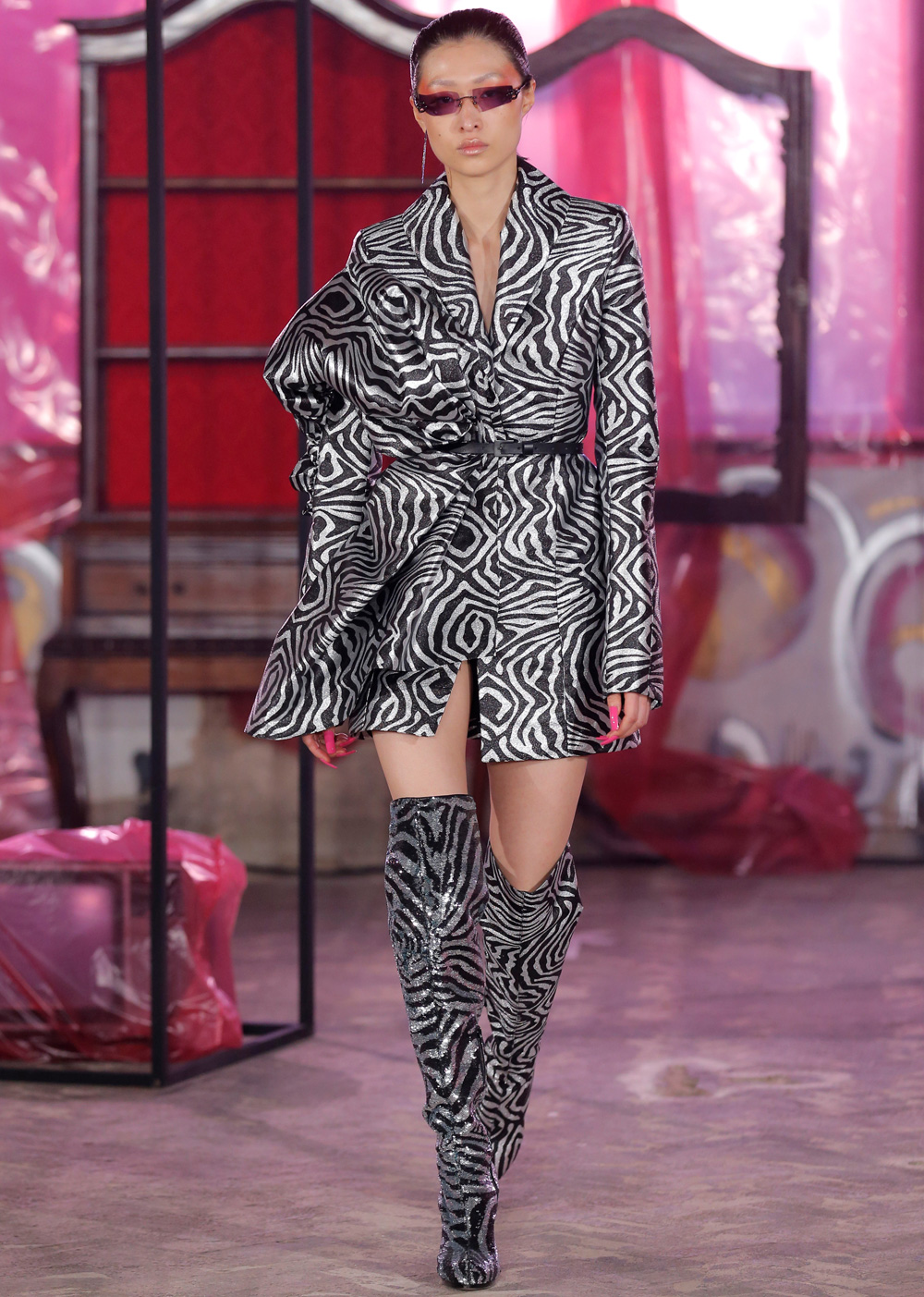 Whether it’s bags, boots, statement earrings or hair accessories, next autumn is going to be all about hip accessories. At J.W. Anderson, we saw the “Disc” bag in various colours, as well as patent croc-effect. Shrimps gave us a diverse choice of arm candy to fawn over, as did Emilia Wickstead, Eudon Choi (we loved the mini bag) and Mother of Pearl. 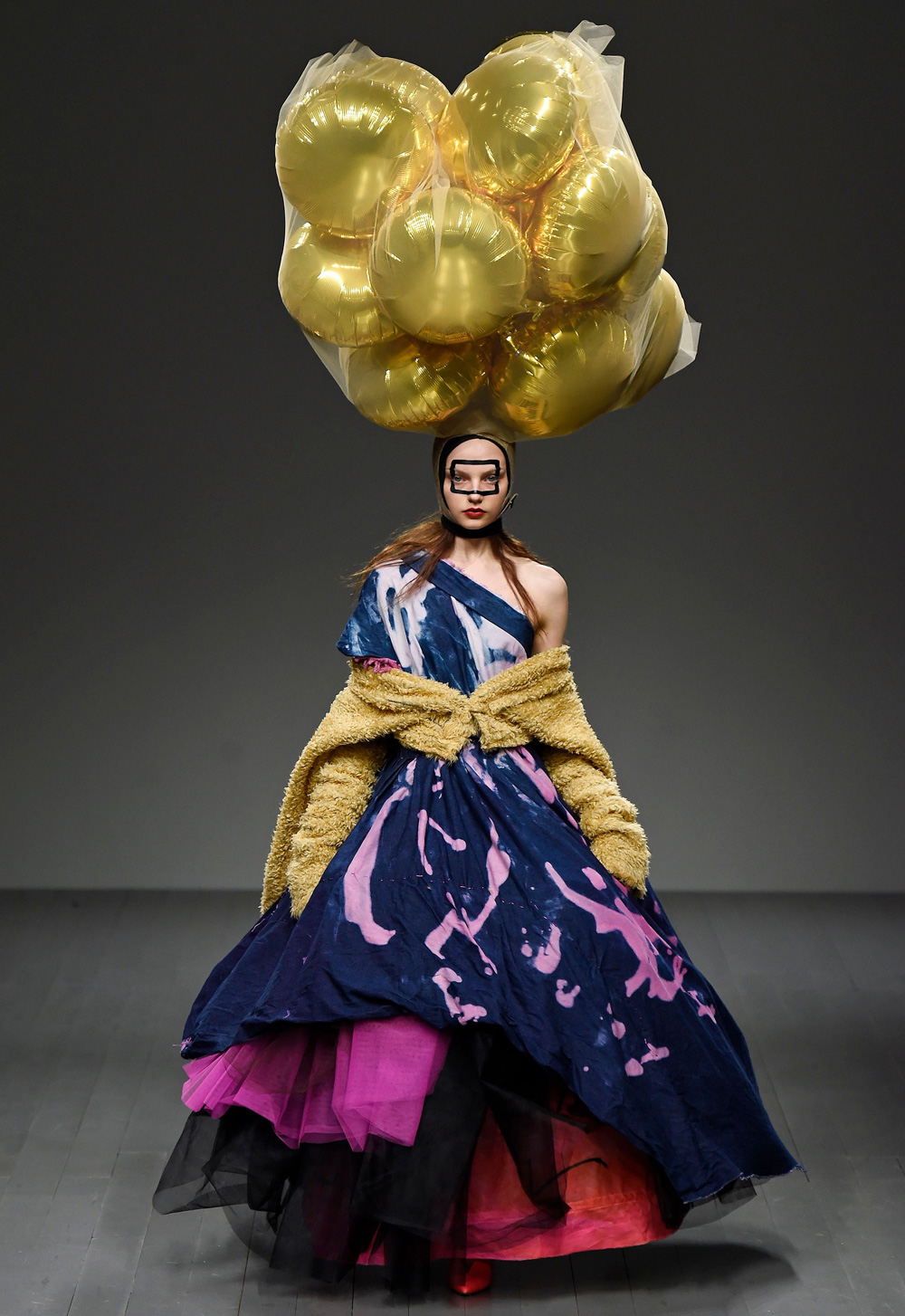 We saw some dizzying boots that went up to the knees or above, like the ones at Christopher Kane, with lace and fur-trim, and Michael Halpern’s sequinned beauties. The more practical ankle boot seemed to be everywhere too, and it mostly came in a kitten-heel, ensuring your comfort. Sneaker lovers will surely opt for Burberry’s rainbow coloured ones or J. W. Anderson’s multi-coloured clear plastic-soled shiny Converses. 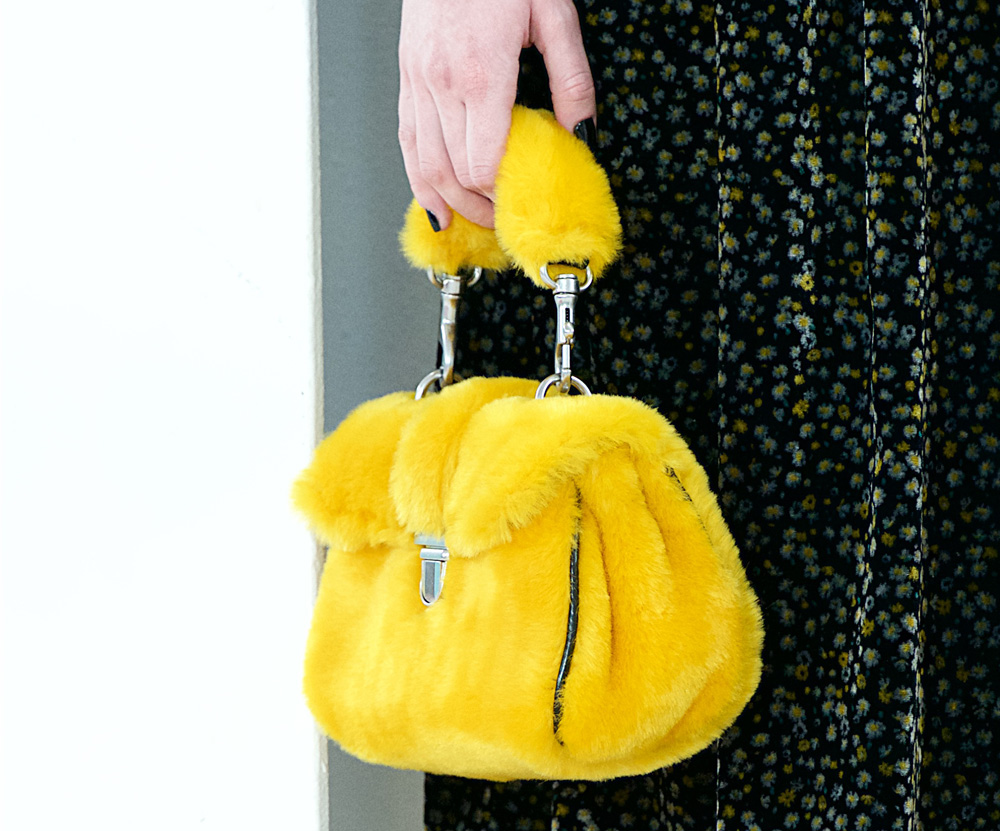 J.W. Anderson presented huge dangling earrings too, which we also saw at Simone Rocha (that crystal, though), Erdem, Faustine Steinmetz and House of Holland. Rhinestone barrettes are also going to be big next autumn, as well as other pretty hair accessories like Simone Rocha’s gorgeous red bows. 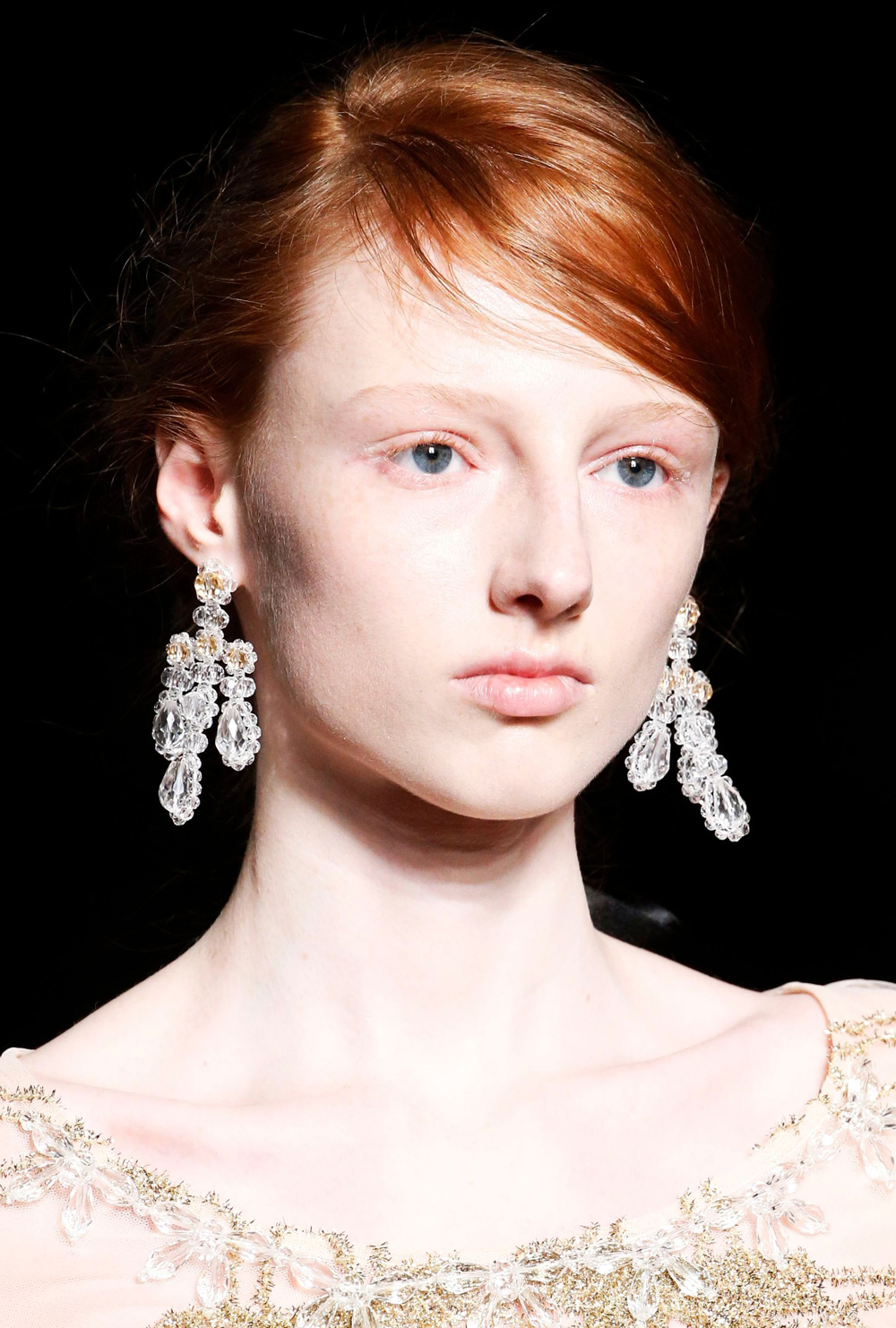 Some of the quirkier accessories included the candy iced and chocolate-sprinkled doughnuts dangling from belt straps at J.W. Anderson. Turkish designer Dilara Findikoglu adorned her belts with antique objects, while Gareth Pugh created a mask that was all made of construction nails. However, the most surprising accessory must have been the flamboyant balloon headdress by Matty Bovan. For his debut show, he designed headdresses made of red, gold, silver or tiger-skin balloons. 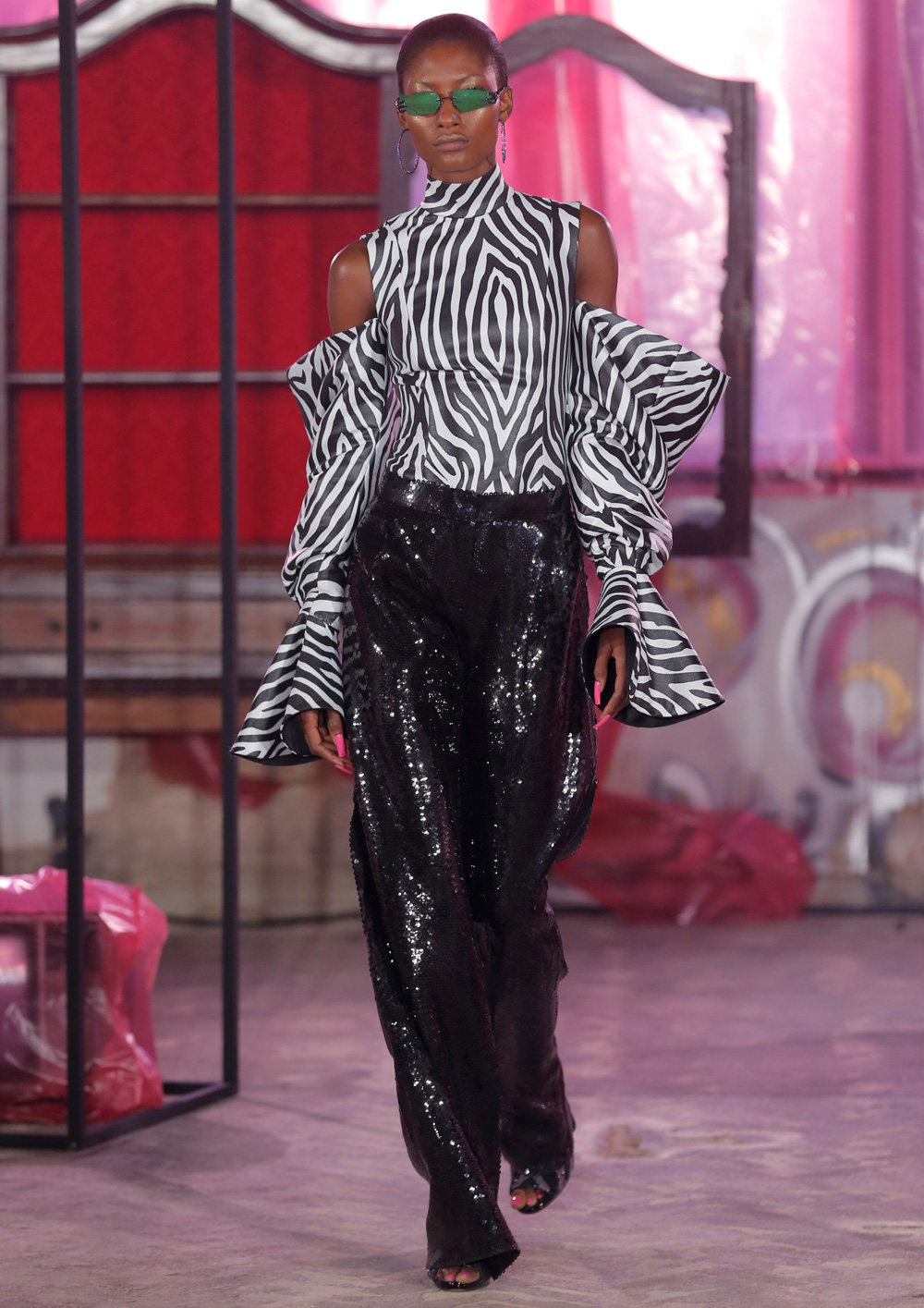 Designers at LFW definitely expressed individuality, along with imagination, originality and creativity. As Michael Kors demonstrated in New York, while clashing two prints is a winning formula, it’s just as stylish to clash three, maybe four. 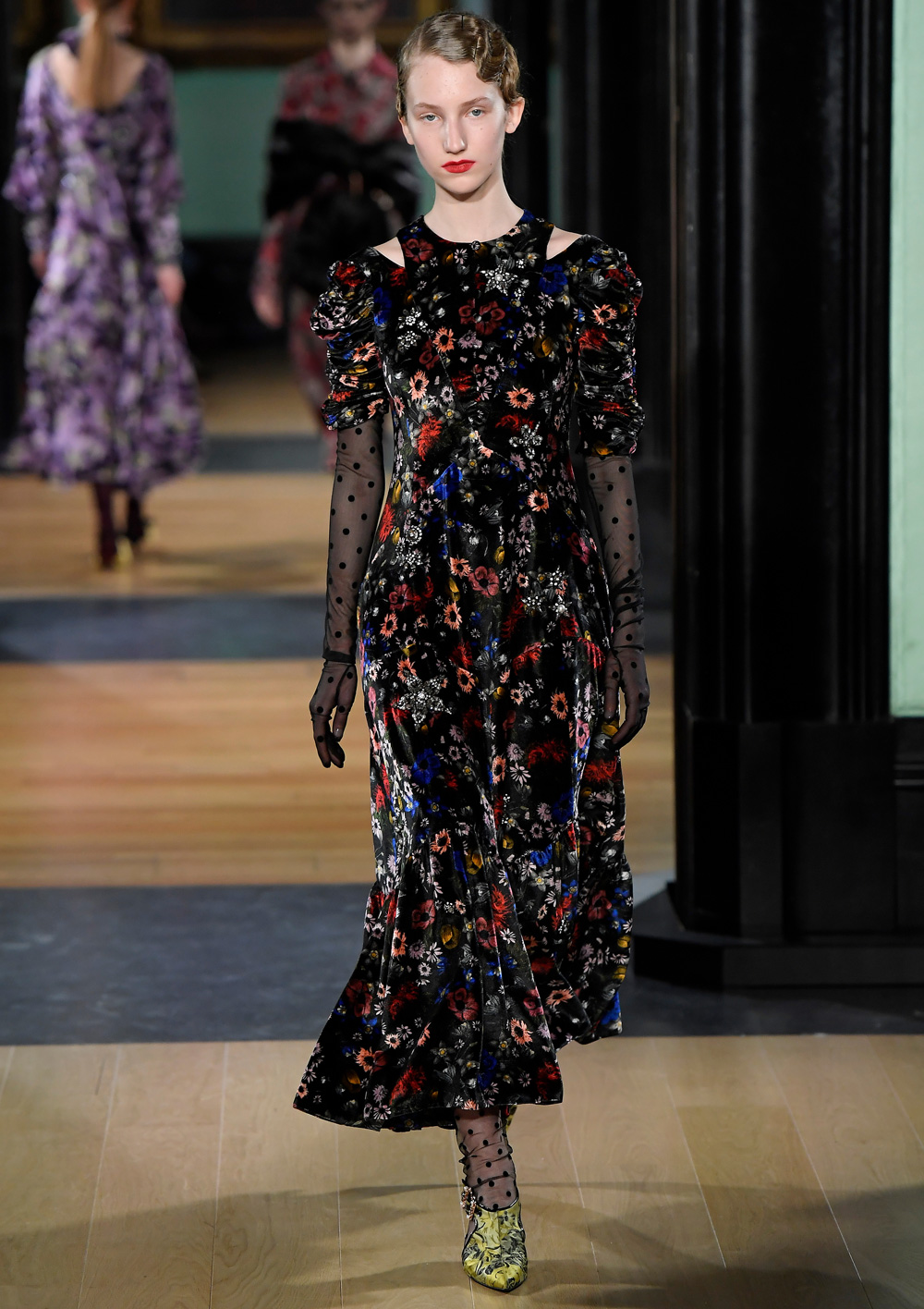 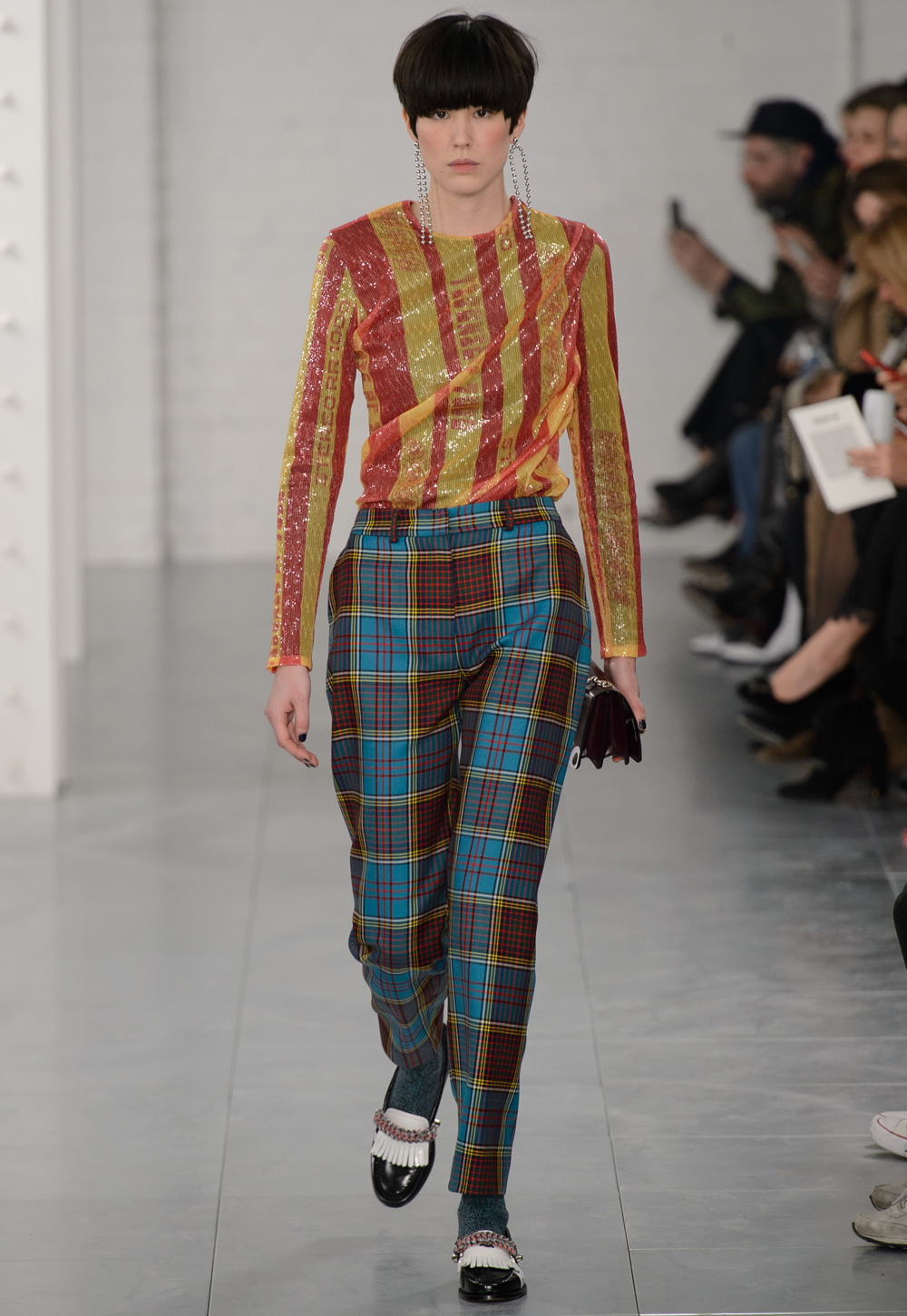 Optical prints in mismatched combinations really turned heads at LFW. And House of Holland was one of the labels to experiment with the mixing of materials and textures, always a perfect way to freshen and reinvent. The maison’s models strutted down the catwalk in clashing prints, tartan and scarves with messages. Plus, brocade and texture mixing were two of the highlights at Mary Katrantzou, while Manchester-born Amie Victoria Robertson’s first solo showing at LFW was a really glamorous mash-up. She added sequins and see-through layers over tartans. Burberry also offered a bounty of fabrics. 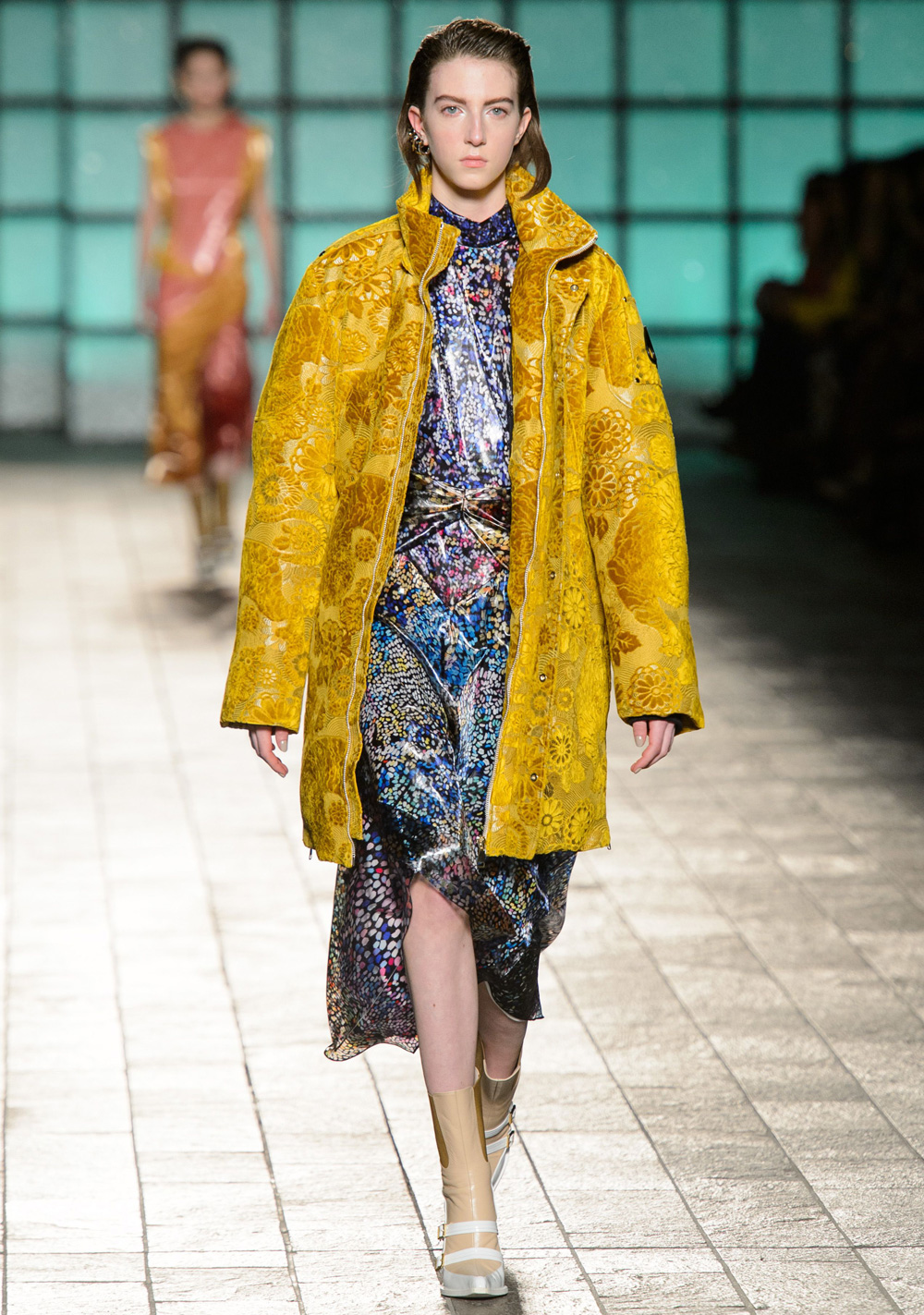 Other winning cominations included Erdem Moralioglu pairing his signature florals with Swiss dots (or a pair of plaid trousers) Additionally, Simone Rocha demonstrated how to master mixing, for example that gorgeous dress that brought playful floral prints and appliques together. And Halpern did it beautifully by matching sequinned trousers with a cold-shoulder zebra print top or a single pair of trousers with zebra print on one leg and some jazzy disco vibes on the other.