Lyn Slater: The Silver Haired Professor-Turned-Style Icon You Need To Know About

The 64-year-old style icon and professor has proved you don’t have to be a millennial to win at the fashion game. 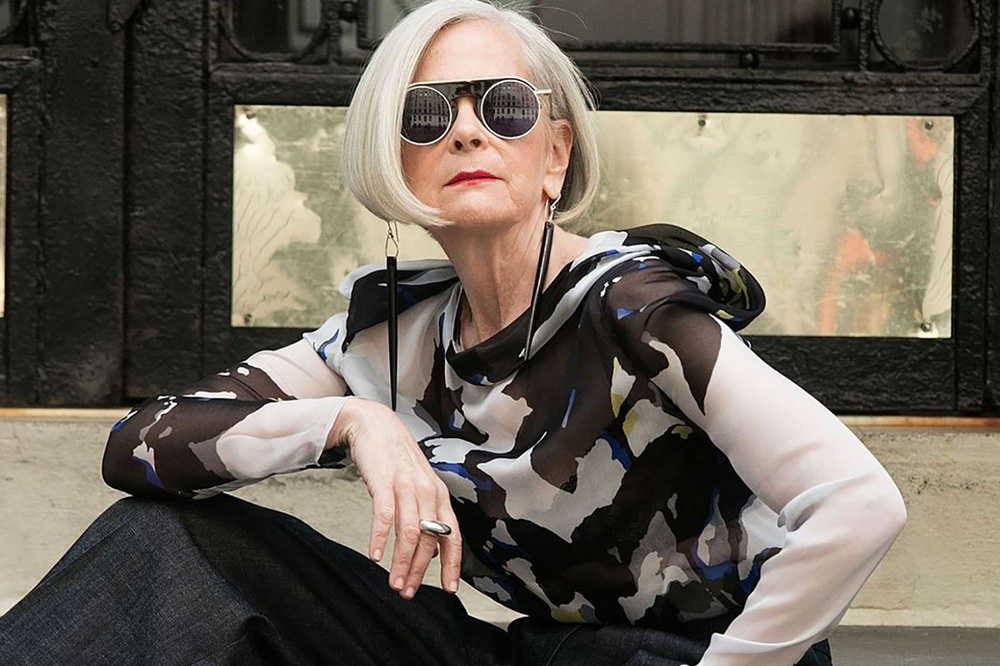 Mature people are certainly having their moment in fashion. Some of the most recent examples include dads walking Balenciaga’s spring 2018 show and Elon Musk’s mother, Mave, who has a contract with IMG, becoming the new face of CoverGirl at 69. And, of course, there’s Lyn Slater, the popular 64-year-old blogger and fashion icon. With over 400,000 followers on Instagram, she has proved you don’t have to be a millennial to be a successful style reference and ooze a groovy attitude.

However, Slater, who has procured a modelling contract with Elite Models London and bagged a campaign with Mango, has never wanted to make age an issue or break barriers. She simply believes everybody should enjoy fashion, at any age. She became an “Accidental Icon” as her blog is called. While waiting for a friend outside the Lincoln Center during New York Fashion Week, looking sharp in a Yohji Yamamoto suit and carrying a Chanel bag, a swarm of photographers started snapping away, believing she was someone important in the fashion world. Even Japanese tourists started coming up to her. That same year, 2014, Slater, who was emboldened by her newfound fame, launched her website. The fact the New York resident was urged to start a blog by her professors and classmates while she was taking courses at the city’s Fashion Institute of Technology must have encouraged her too.

As Slater, who has a granddaughter who calls her Coco (Chanel), claims in the “about” section of her website, she started the blog because she was dissatisfied with the majority of magazines and websites targeting women in her category. “Women (like me) who are not famous or celebrities but are smart, creative, fashion forward, fit, thoughtful, engaged, related, and most importantly clear and comfortable with who they are,” she writes. A researcher by profession, she did a lot of investigation and found a niche. Within half a year, she had a cover and editorial in “Grey” magazine.

With her graceful posture, perfectly styled grey hair (which she never dies), unconventional outlook and stylish streak, she has resonated with people of all ages. She believes her young fans feel liberated by her attitude, as they don’t want to feel scared about getting older and worry about their looks. “This project is me saying: I’m not 20, and I don’t want to be 20. But I’m pretty cool, and here I am,” Slater explained to “W" magazine.

The pictures, taken by her longtime partner Calvin Lom, a scientist with artistic abilities, highlight minimalist yet chic and statement-making looks. Along with the Issey Miyake outfits planned just for her, you’ll find Slater, who got her first tattoo when she was 40, wearing standout accessories and jewellery. She’s also not afraid to take fashion risks or rock a striking pair of trousers, perhaps a leather dress even.

What’s more, Slater has enough energy to keep her day job as well. She is a professor at Fordham University. "I take the skills I have as a professor and in my work before doing this blog—where I had to engage young people who didn’t want to be engaged, or engage politicians about passing a law—and put all of that into social media,” the fashion-forward educator said to “W” magazine.

I’ve had an old, and made a new career, from disrupting labels Join me in the @riverisland campaign for inclusion: #labelsareforclothes For every t-shirt purchased and campaign hashtag shared @riverisland will make a donation to @ditchthelabel #wearingri #ad

Before working as a professor, Slater was running a live-in unit for young female offenders in upstate New York, and she has also helped out as a social worker. And everything is now cleverly connected somehow, for example she gives advice on what to wear for court appearances.

Due to her differing jobs and the fact she’s the oldest of six siblings, she’s always been surrounded by younger people, which without a doubt has helped her prove #AgeIsNotAVariable, the hashtag she is so well known for.

Warm and comfortable in cashmere from @lordandtaylor. My holiday party go-to. #LTHoliday #ad