The stars of the small screen treated us with lots of A+ red carpet fashion during the 2017 Emmy Awards. 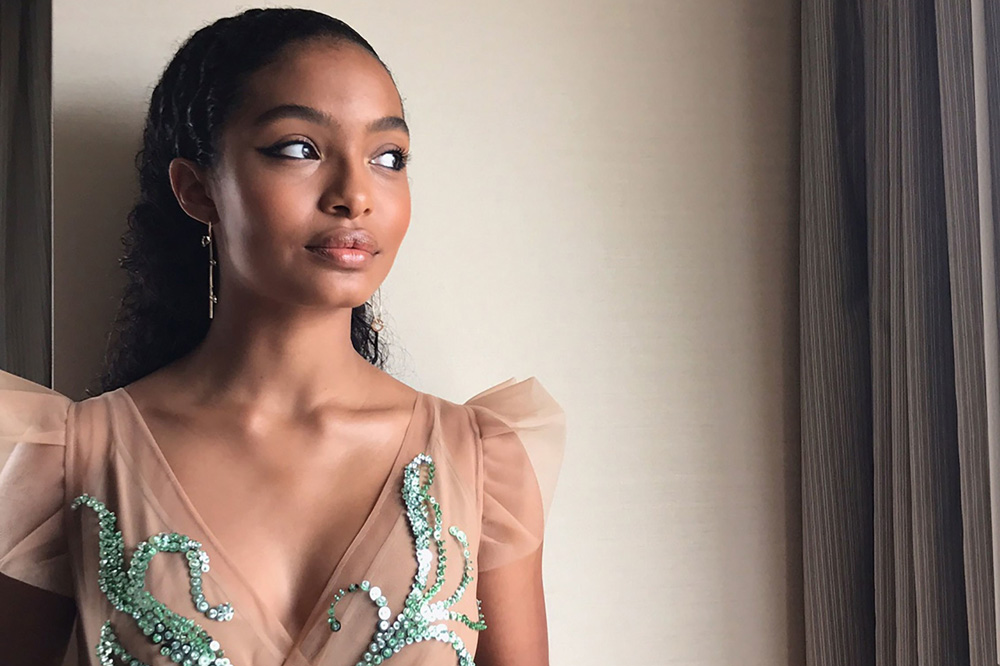 As well as being amongst the best achievers in the American TV world, celebrities attending the 69th Annual Primetime Emmy Awards proved they have what it takes to pull out all the stops when it comes to red carpet fashion. From gorgeous custom designs to flirty feather or sparkling silver trends and mega jewellery, the evening indulged us with some of the most spectacular looks we’ve seen in recent history. Celebrities and designers, who find the red carpet the perfect platform to showcase their creations, seriously upped the ante this time, turning Los Angeles’s Microsoft Theater into a sea of jaw-dropping looks.

Whether it’s the very young Millie Bobby Brown in a princess-esque dress or Jane Fonda, who is defying her age one look at a time, click through to see our favourite picks. 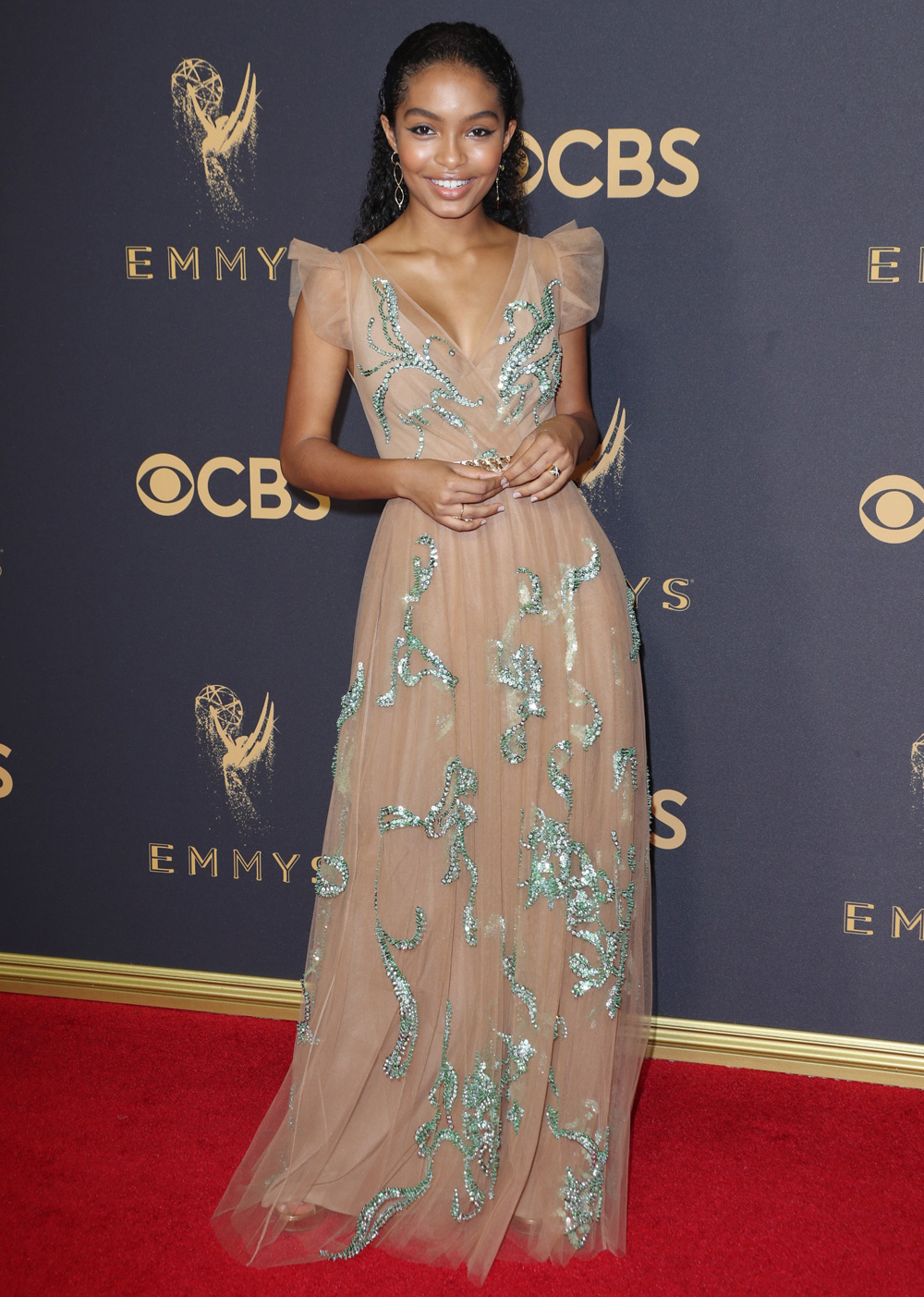 “Black-ish” and upcoming “Grown-ish” star Yara Shahidi is just 17, but she looked all grown up in a nude-pink chiffon dress with tulle netting and green buttoned sequins by Prada. She completed her look with Paige Novick dangling earrings. 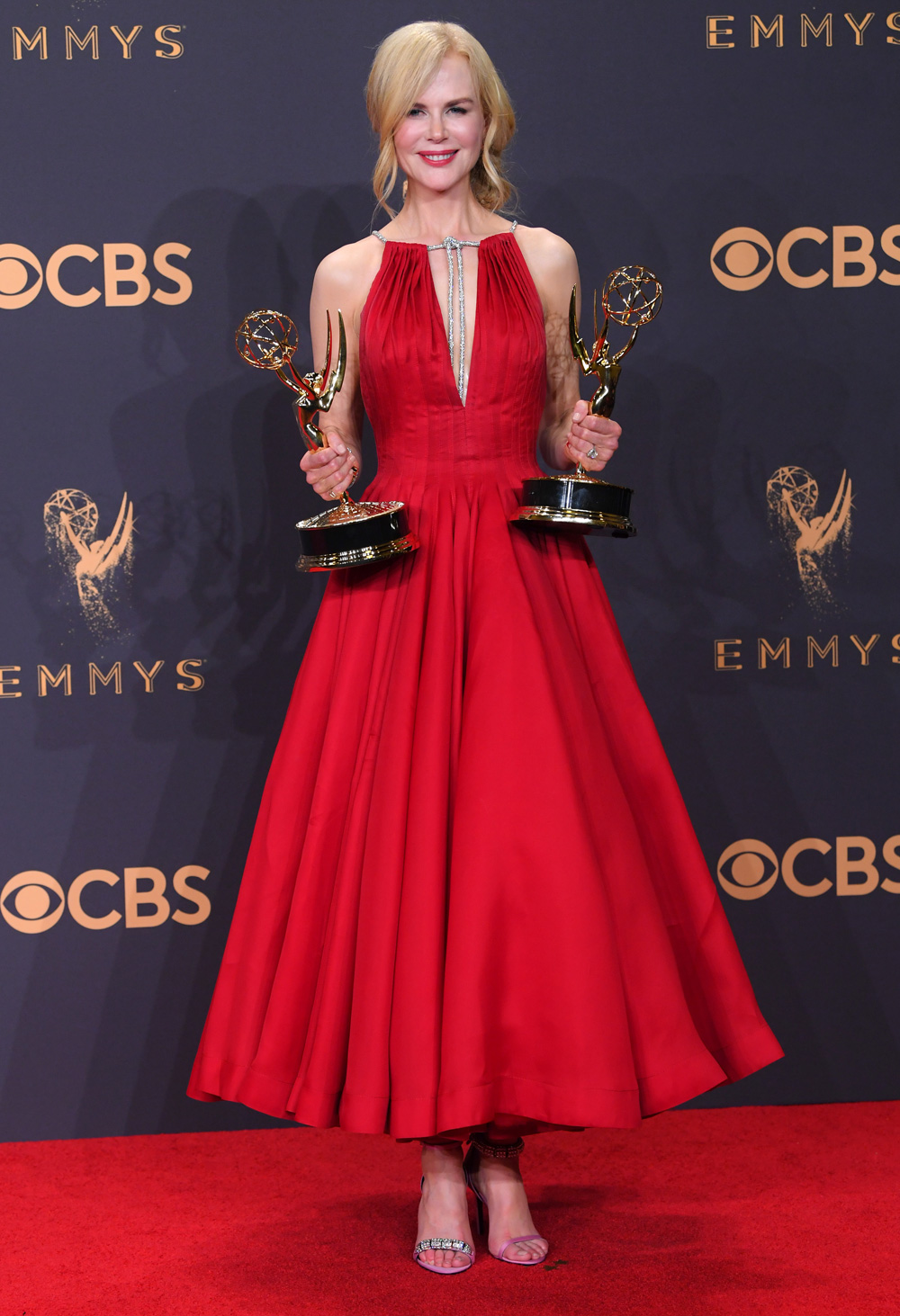 Nicole Kidman, who won the Best Actress in a Limited Series or Movie award at the event, opted for a show-stopping scarlet tea-length Calvin Klein By Appointment dress. The 50-year-old’s mismatched but related shoes by the same brand and reported $2 million worth of Harry Winston jewels were also a talking point. 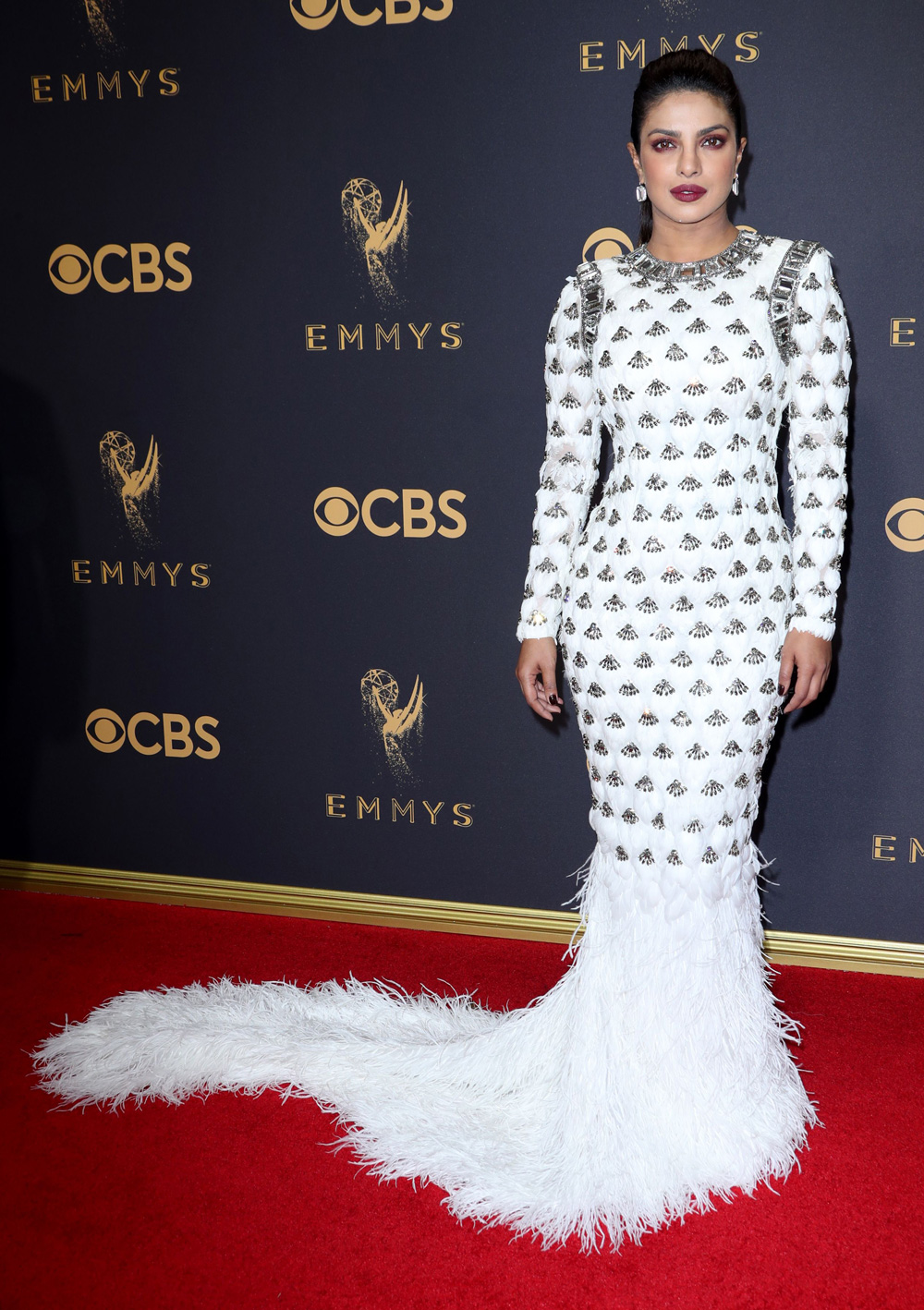 Priyanka Chopra’s stunning white Balmain gown fitted like a glove. The long-sleeve jewel-embellished gown with a feathered bottom and train is the latest example of how the Indian diva, who co-presented an Emmy, always brings her A-game on the red carpet. 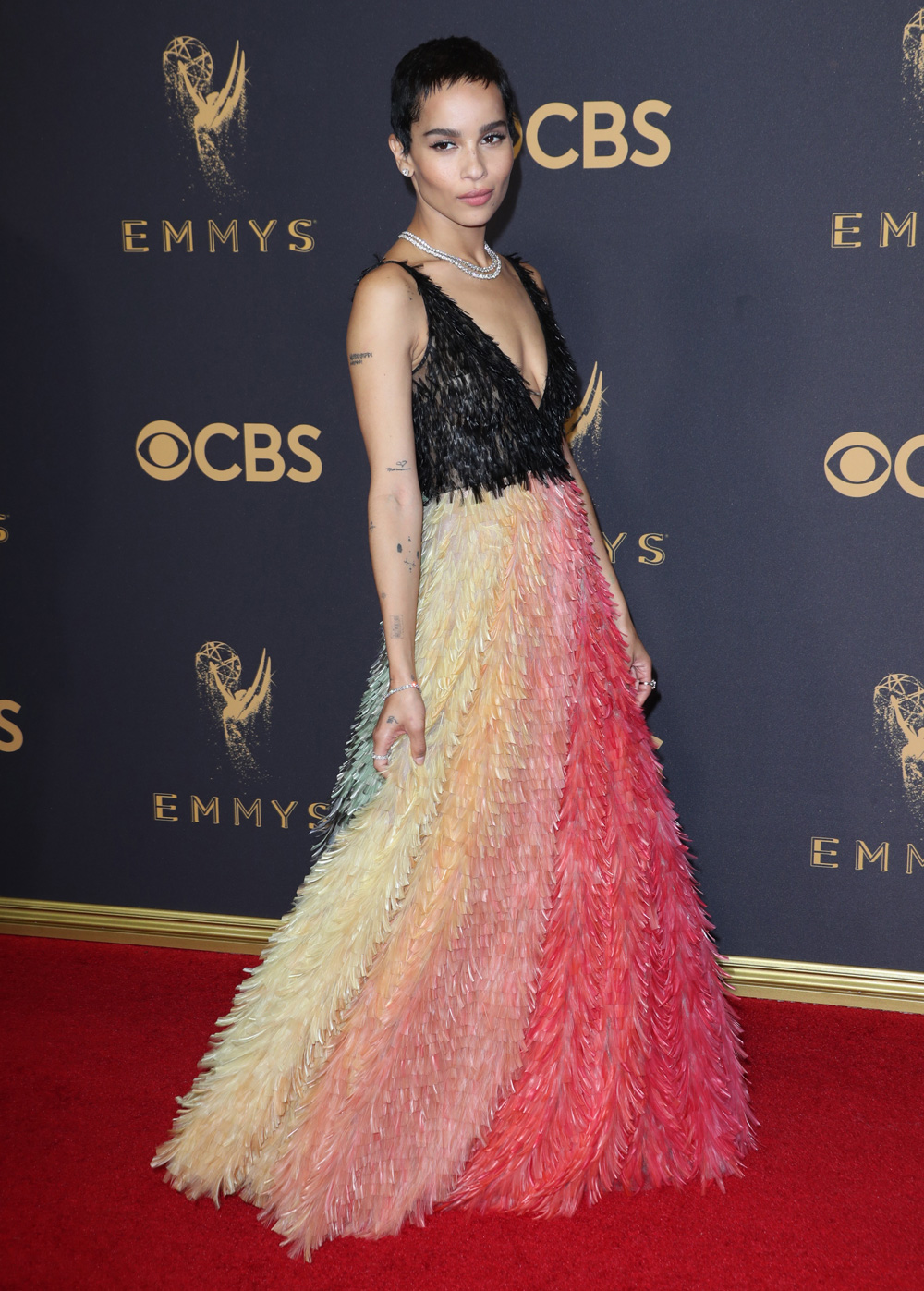 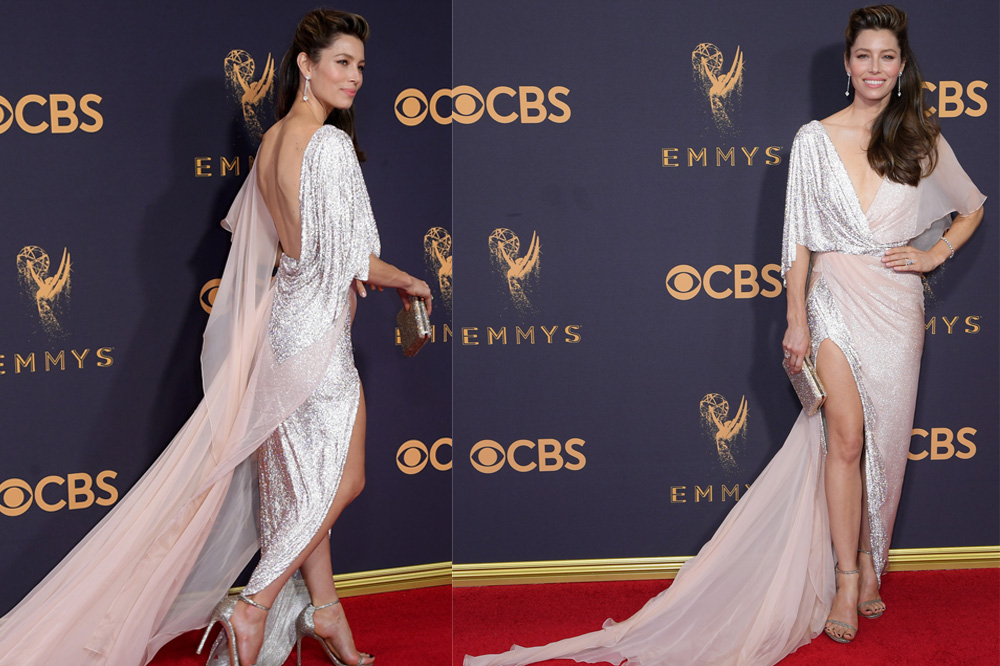 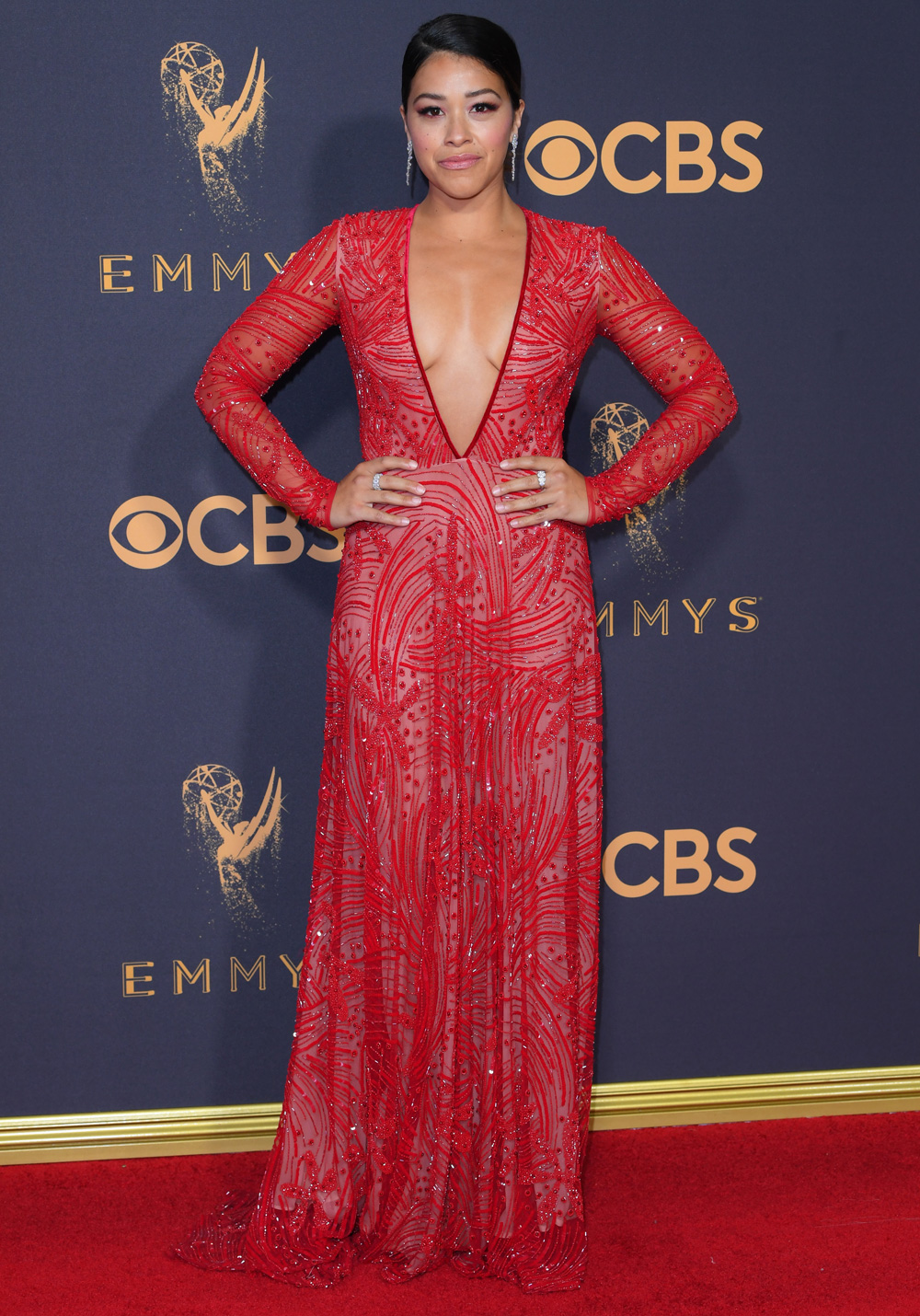 If you want to show someone an example of “red hot,” just get out this picture of Gina Rodriguez in a plunging Naeem Khan number. Rodriguez, who acts demure in “Jane the Virgin,” showed off her toned body in the long-sleeve dress with fireworks-esque beaded embroidery, sheer fabric and romantic skirt. 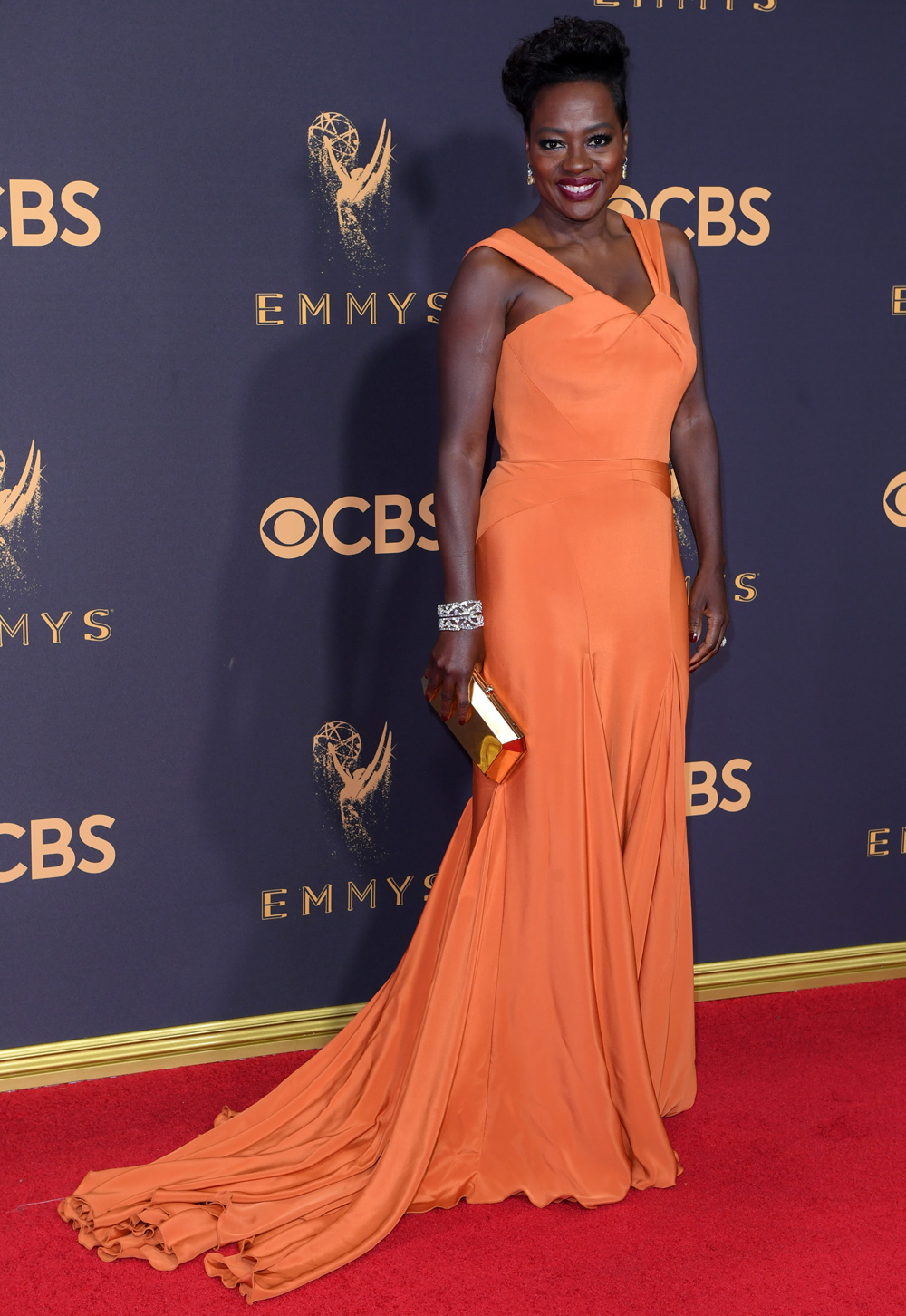 As well as being an Academy Award winner, Viola Davis proved she can be a front-runner when it comes to style in this tangerine Zac Posen gown. Nominated for her role in “How To Get Away With Murder,” she was radiant in the floor-length dress, which she paired with a sleek gold clutch and Harry Winston cuff and earrings. 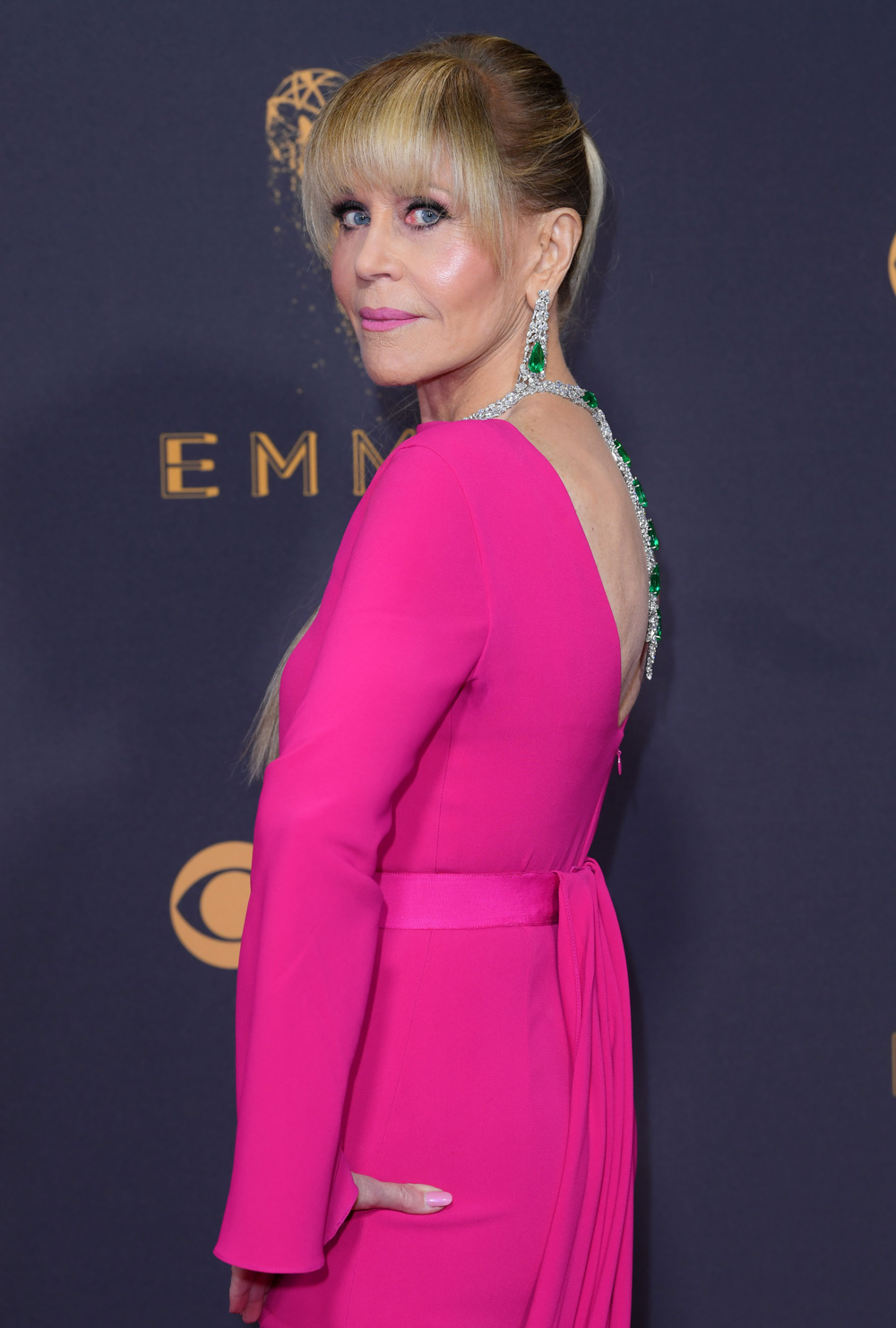 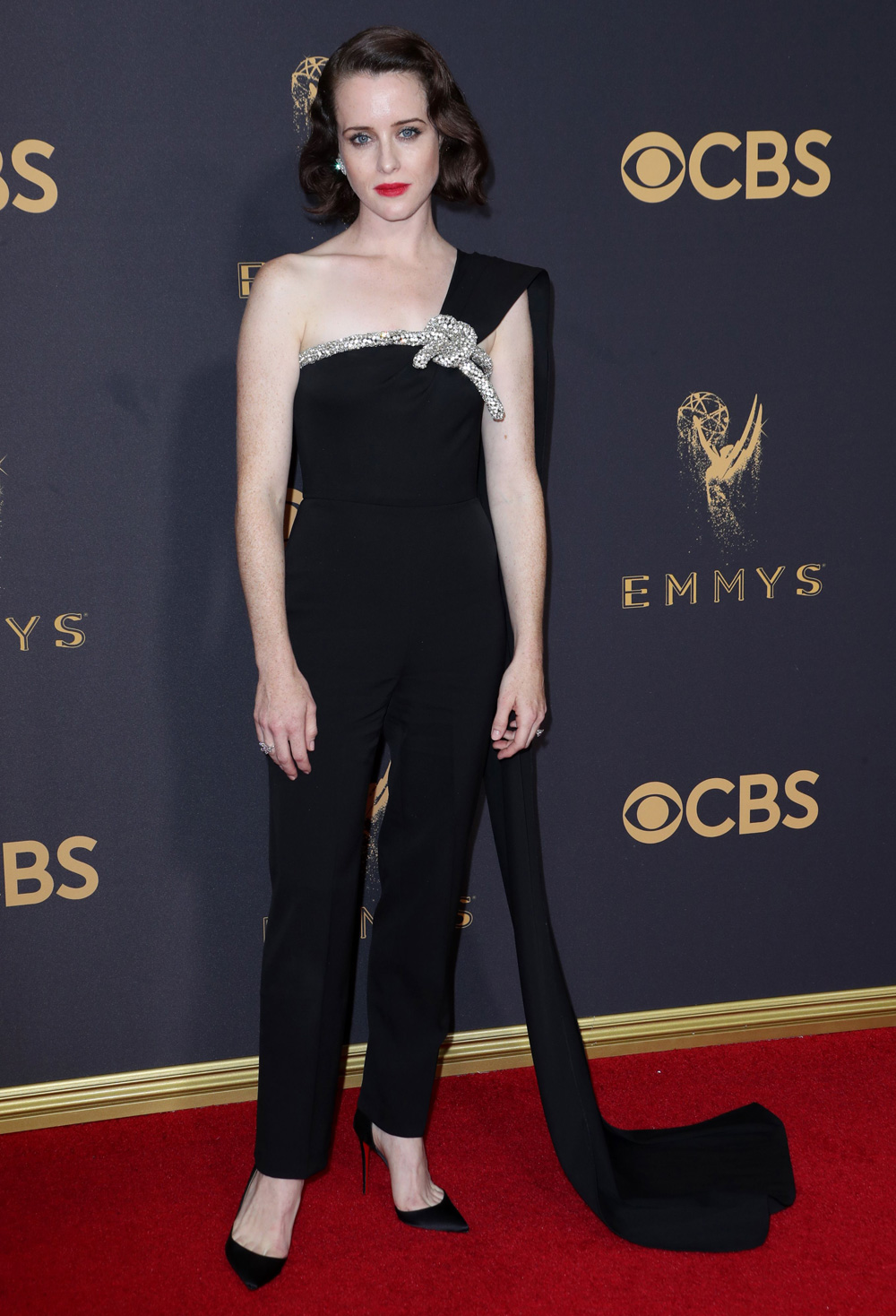 Claire Foy, who is sadly leaving after the second season of “The Crown,” switched up this time by going for a glitzy black jumpsuit by Oscar de la Renta instead of one of her usual feminine gowns. The diamante trim featuring a knot and the long cape added lots of glam to the sleek one-shoulder piece. 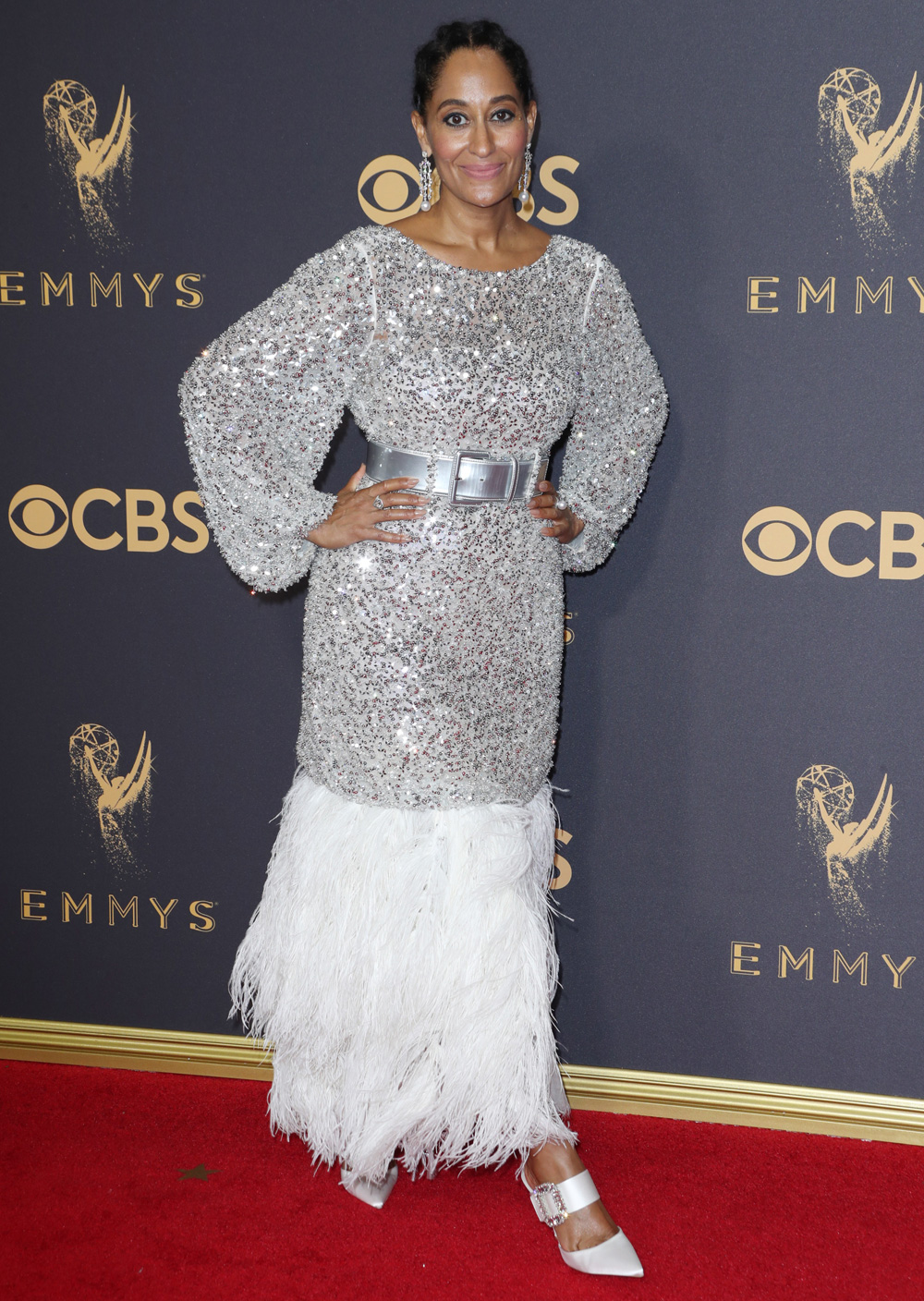 Tracee Ellis Ross was shining bright in a Chanel Haute Couture dress. The actress, who was nominated for Best Actress in a comedy series for her role in “Black-ish,” was a vision in billowy sleeves, crystal-beaded flowers, cascading feathers and metallic belt. Her Roger Vivier heels and Irene Neuwirth jewels were also show-stopping. 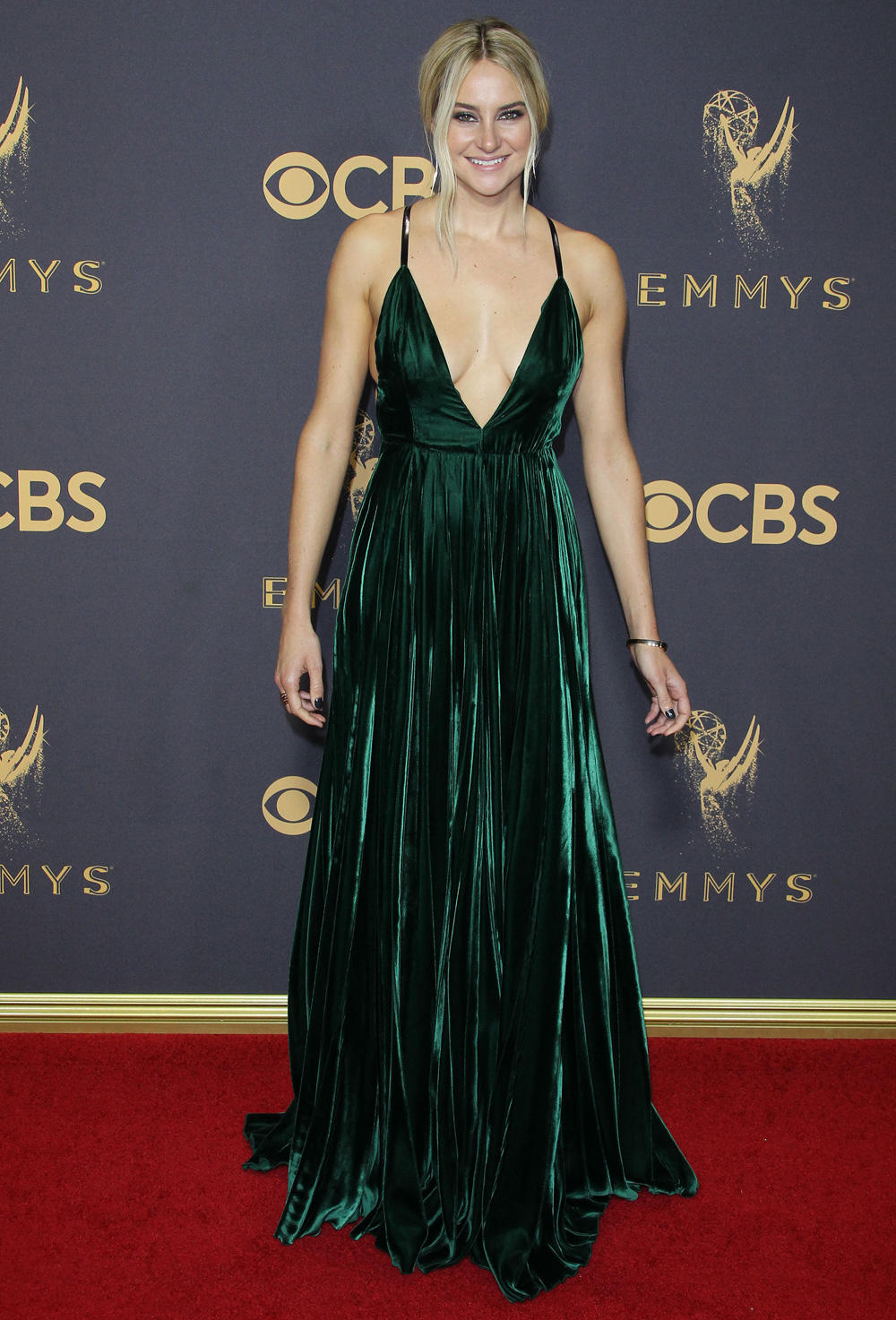 Debuting a new blonde hairstyle, Shailene Woodley rocked in her emerald green custom Ralph Lauren gown. The 25-year-old, who was nominated for Outstanding Supporting Actress for her role in “Big Little Lies,” stunned in the floor-hitting velvet dress with low neckline, cinched waist and pleats. She kept the rest of her look simple with Alexis Bittar jewels and Stuart Weitzman shoes. 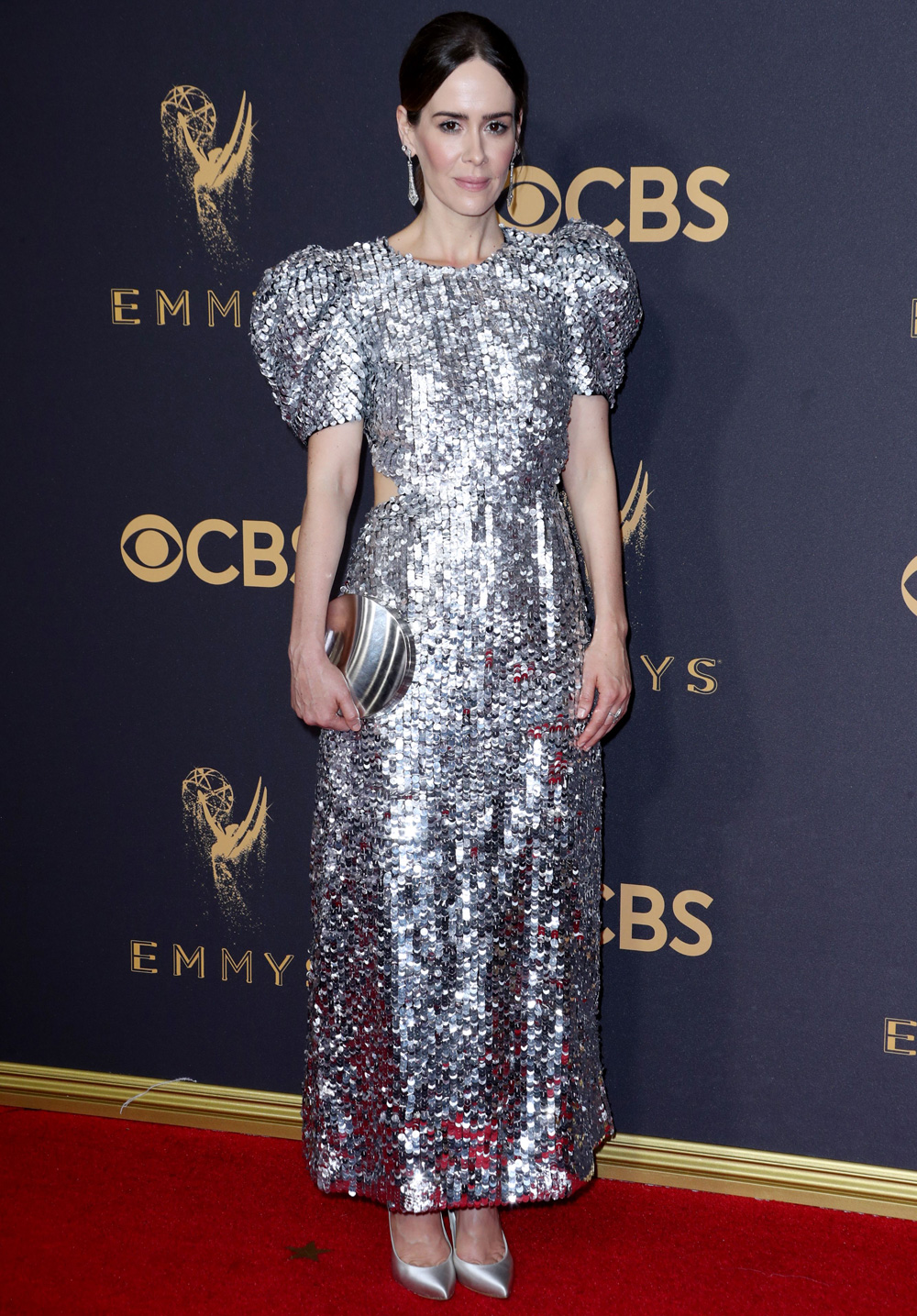 Sarah Paulson shut down the red carpet in a cocktail dress that was just recently seen on the Carolina Herrera runway. It features silver sparkly detailing, puff sleeves, a cutout at the side and bare back. Paulson, who won an Emmy last year, accessorised it with a Lee Savage clutch and Lorraine Schwartz jewellery. 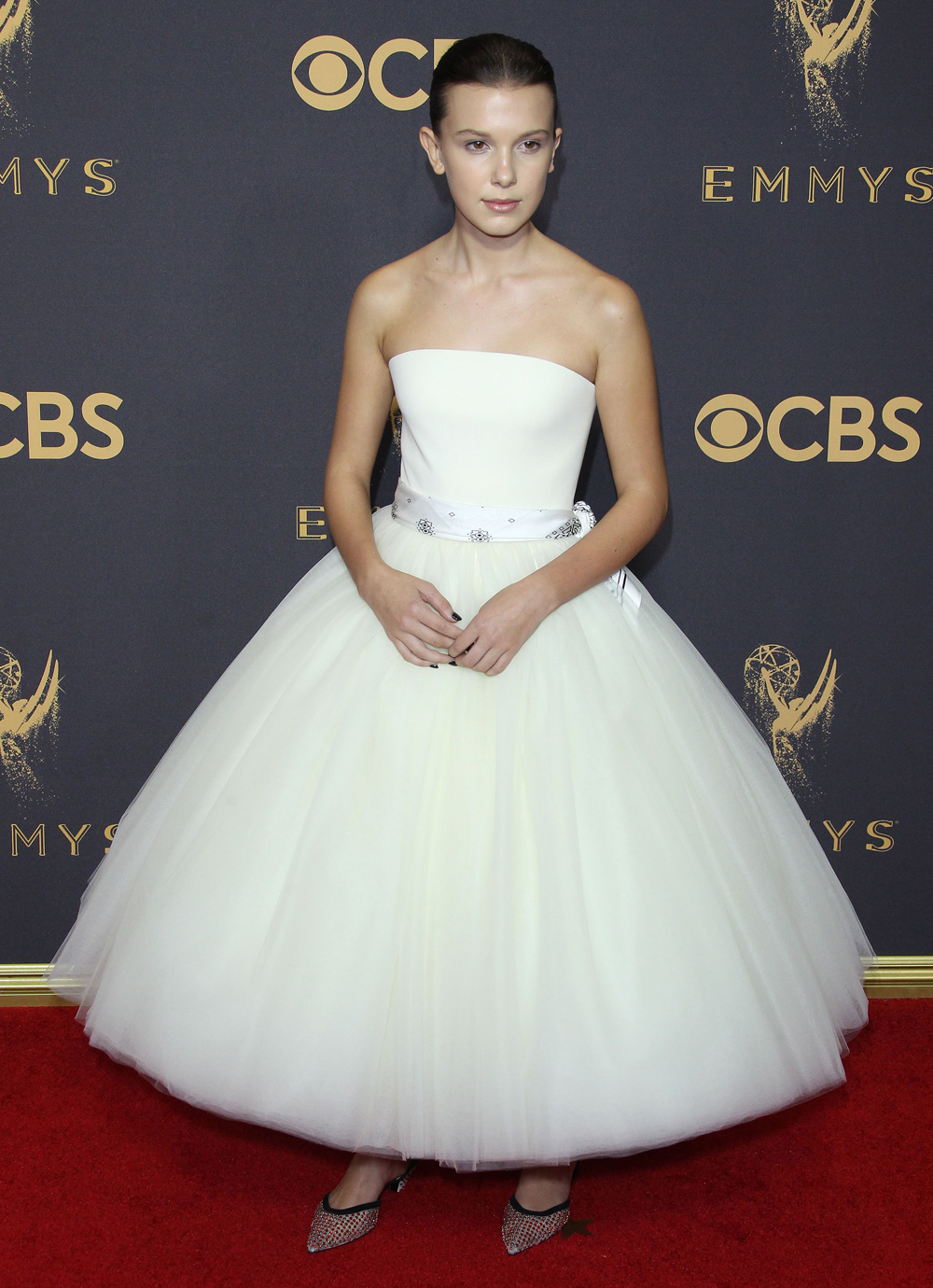 She’s only 13, but Millie Bobby Brown didn’t miss a sartorial beat in her princess-like Calvin Klein by Appointment dress. She wore the white ankle-length dress, which had a tutu with lots of silk tulle, with studded kitten heels by the brand and hair in a slicked-back bun. 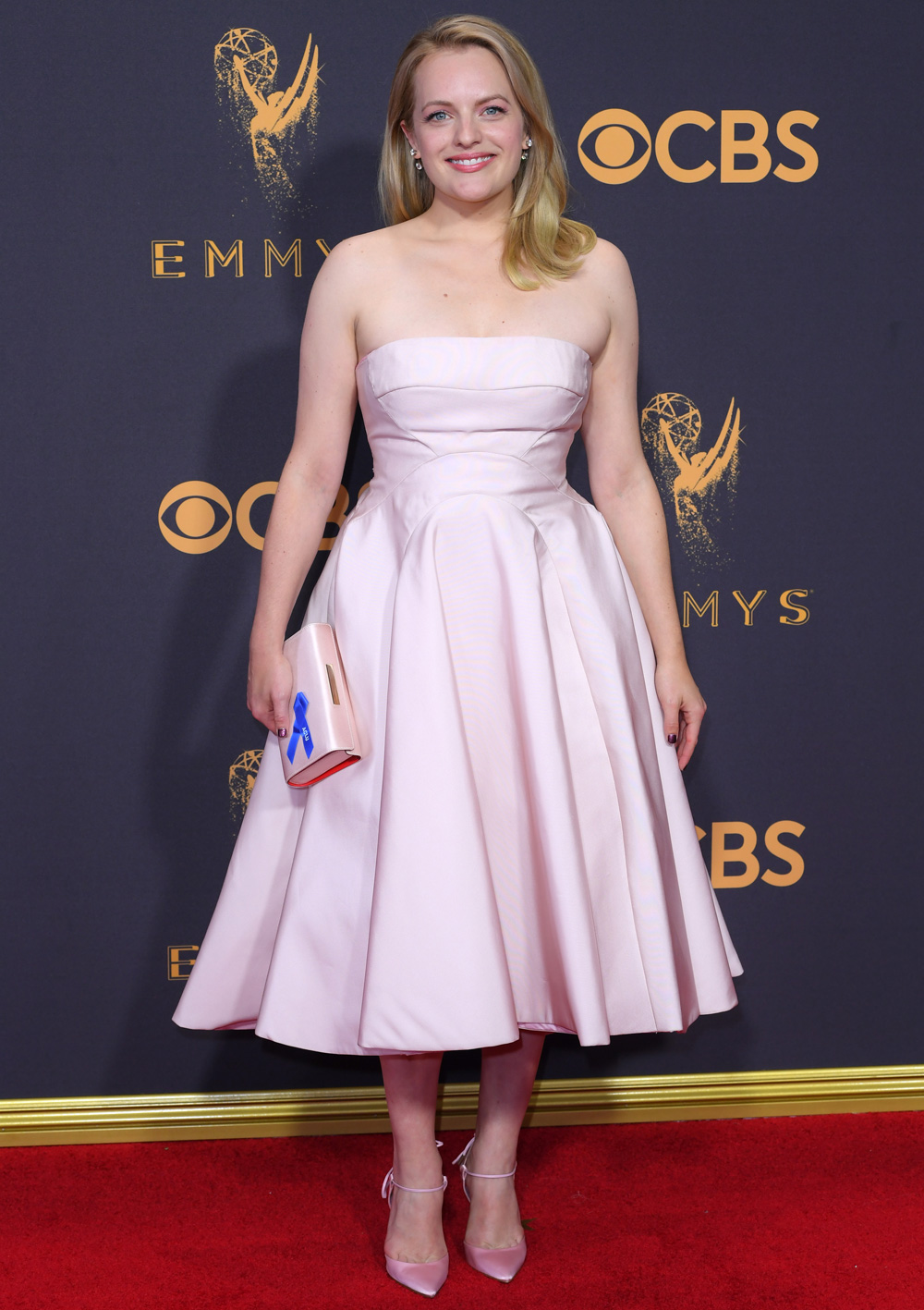 Elisabeth Moss couldn’t have looked more ladylike as she accepted the Emmy for Outstanding Lead Actress in a Drama for playing Offred in “The Handmaid’s Tale.” She stunned in a strapless pale pink 50s style custom Prabal Gurung dress with a tea-length hemline, Olgana Paris heels (with a secret feminist message) and Forevermark jewellery. The actress also made a statement with the ACLU ribbon on her handbag. 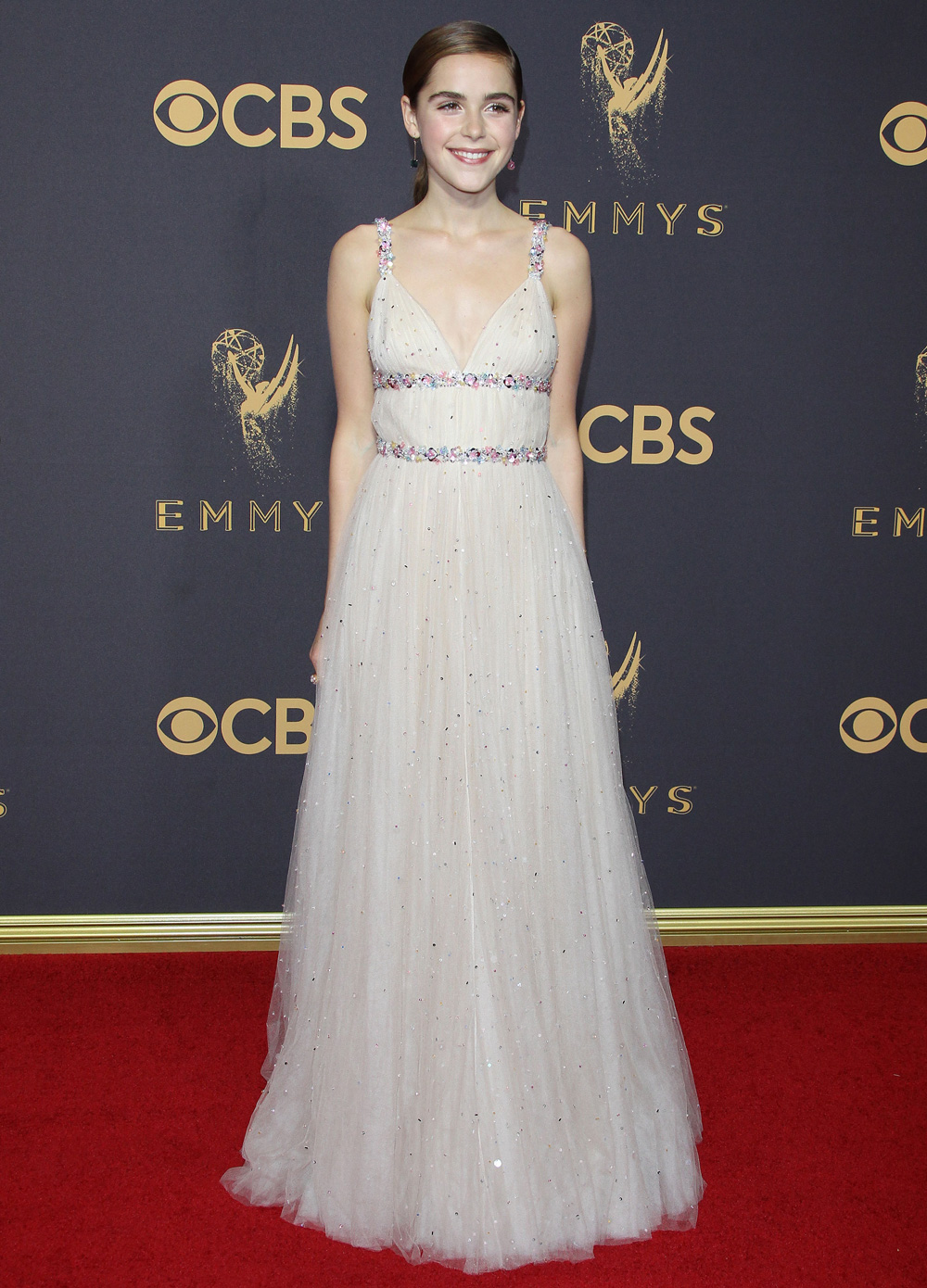 Kiernan Shipka sparkled in her fairytale-esque nude-coloured Miu Miu gown. The young “Feud” actress charmed in the ethereal number with a modern princess vibe, which featured tiny flower embellishments on the waist and straps.  She teamed it with shoes from the same brand, which she has championed on the red carpet before. 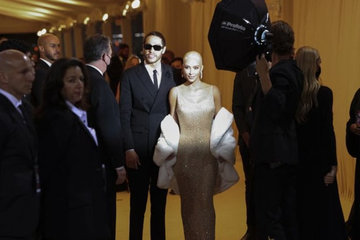 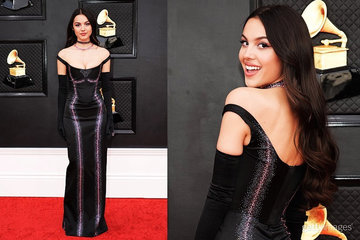 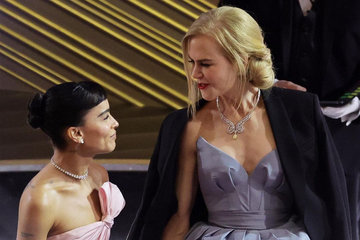