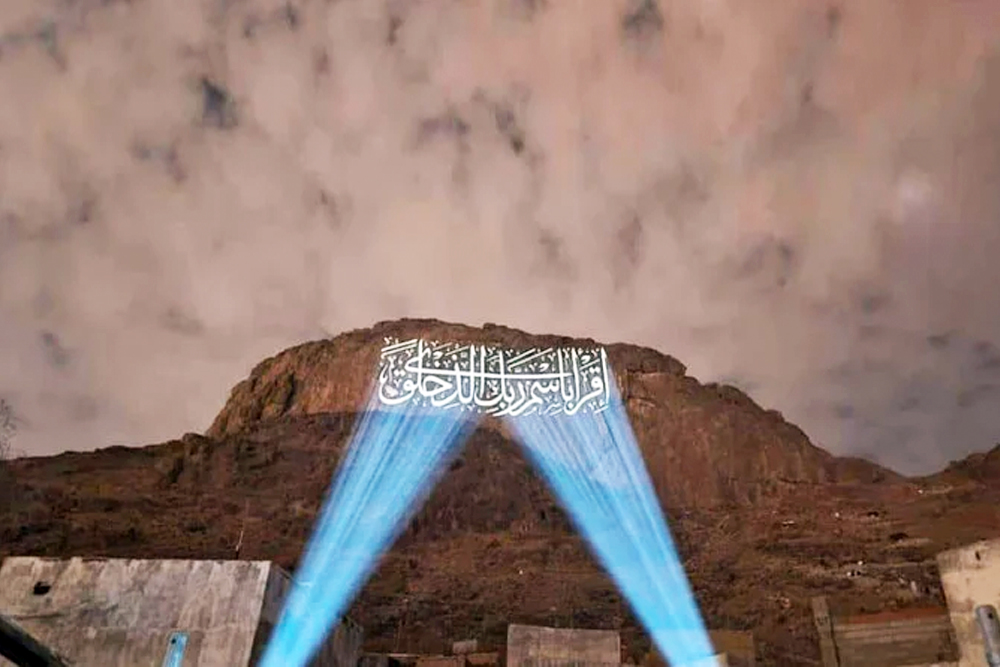 People living in Makkah were amazed by a laser light display that lit up the skies with the first Qur’anic verse that was revealed to the Prophet Muhammad. The verse shone above the district of Jabal Al-Noor, 4 km northeast of the Grand Mosque in Makkah and home to the Cave of Hira, where the prophet received the first revelation by the Angel Gabriel.

Dr. Fawaz Al-Dahas, director of the Makkah History Center, commented, “Jabal Al-Noor has a historical value for Muslims in general, and is one of the most important historical and archaeological sites in Makkah.” He continued, “Throughout history, it was called Mount Hira, but it has been named Jabal Al-Noor (Mount of Light) in reference to the light that radiated throughout the earth after the first verse of the Holy Qur’an, ‘Read in the name of thy Lord who created,’ was revealed.”

Including a mountainous ski resort, and a Six Flags theme park.https://t.co/kbfI3YBL5R

It was at Jabal Al-Noor that the prophet remained secluded as he meditated and reflected on God’s greatness and went on to reject polytheism. Al-Dahas added, “What distinguishes Makkah from the rest of the world’s cities is that it is an open museum. All its mountains, valleys, rocks and cemeteries represent a unique history, telling immortal stories of the prophet and his honorable companions.” Under Saudi Arabia’s Vision 2030 plans, there are key goals to enlighten visitors on the kingdom’s religious and cultural sensibilities and sensitivities – especially when it comes to encouraging them to learn about sites that hold significance for Muslims all over the world.

The laser light show was hosted by Samaya Investment Co., which is also building two cultural projects in Makkah: A Museum of Revelation in Jabal Al-Noor and a Museum of Migration. These two museums will educate visitors on the prophet’s mission and message and will convey pre-Islamic history right through to the relevance of his message in present day.

Under the direct supervision of the Royal Commission for Makkah City and Holy Sites and other agencies, foundations have been laid to establish the Hira Cultural District on an area that spans over 67,000 square meters. Across this site, there will be a plethora of touristic and cultural highlights including the Holy Qur’an Museum and the Revelation Gallery.

The Revelation Gallery is a space that will educate visitors on the revelations made to Prophet Mohammed via a technical presentation, as well as the contents of the Holy Qur’an.