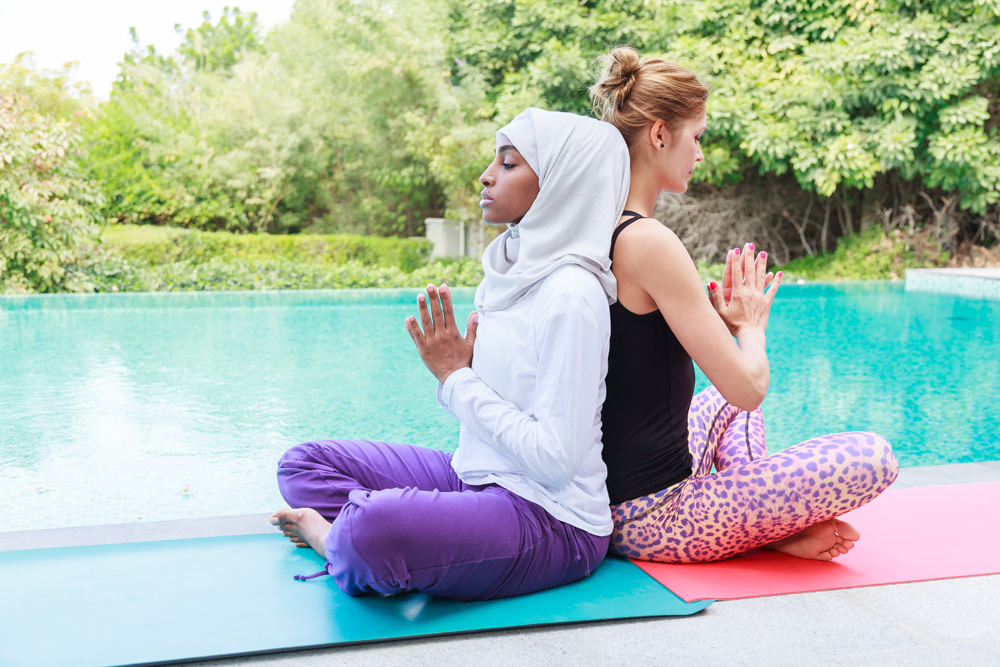 With its power to invigorate the mind, body and soul, yoga has become a popular pastime for men and women alike. However, the yoga industry has drawn criticism for its lack of diversity, with yoga books, magazines and YouTube videos being dominated by skinny white women wearing expensive yoga pants.

Thankfully, things are slowly starting to change with more and more people from different backgrounds, including Arab women, making their mark on the yoga world.

To celebrate this sea of change, here are 5 talented yoginis paving the way for Arab women in the world of yoga:

Hanne Lazaar has made a name for herself as one of the most popular hijabi yoginis in the MENA region. Originally from Morocco, not only does she impress with her super flexible moves but she also posts pictures in beautiful traditional outfits, showing that you don’t have to wear expensive yoga pants to be a great yogi.

Based in Beirut, Rita Tchamitchian started practicing yoga and meditation at the age of 16 and has never looked back. As well as certifying as a yoga teacher in her native Lebanon, Tchamitchian has travelled around the world studying her craft and received her second teacher training at an Ashram in India. She is also a certified physiotherapist, masseuse and acupuncturist.

Some days inspiration flows; feeling on top of the world and like there is nothing that can't be done. Other days it ebbs; like sand slipping between your fingers you just can't seem to grasp any of it. But all of it is fleeting and to maintain balance, one will eventually pave another path into the other. And that is the beauty of this life; that none of this will last forever. So, can you love now? #LettersbyLamise #lovenow #upsidedownlife #adhomukhavrksasana #handstandinthesand #handstands #galveston #galvestonbeach Wearing @aloyoga #aloyoga

Dreams, both day and night, are the beginnings of bringing something to life. Micheal Angelo had to envision the Sistine Chapel before he painted it to life. The Great Pyramids of Egypt were a simple thought before they became an awe inspiring wonder. Seeing the pyramids was a dream of mine since I was a child; A dream I never failed to stop seeing in my minds eye. So, go ahead. Dream on, sweet dreamers. #LettersbyLamise #suryayantrasana #parivrttasuryayantrasana #sundialpose #giza #pyramidsofgiza #egypt #throwback #IActuallyDreamtOfBeingIndianaJones Ps. Swipe to see another favorite photo of mine, from our Egypt trip My shirt is from @aloyoga #aloyoga #beagoddess

Lamise Mansur first encountered yoga at the age of 9 when her mother brought home a yoga VHS tape. Since then, the multi-talented yoga teacher who is of Lebanese, Palestinian and Brazilian descent has continued to wow with her incredible skill and strength on and off the matt. As well as teaching yoga, Mansur loves taking photographs and cooking healthy meals.

A post shared by NouraYogalates Bliss in Dubai (@yogalatesblissindubai) on Jul 4, 2017 at 1:12am PDT

A post shared by NouraYogalates Bliss in Dubai (@yogalatesblissindubai) on Jun 7, 2017 at 1:07am PDT

Noura El-Emam is a famous Dubai yoga instructor and worked in the field of marketing before turning her passion for yoga into a business. She now runs Yogalates Bliss in Dubai, a studio that teaches classes in yoga and pilates. A lover of nature and the outdoors, El-Emam runs an annual yoga retreat on the beautiful island of Bali.

Thanks to a wonderful recommendation from @lunaroniyari I went to see an incredible Osteopath a few days ago. I feel like injuries are way more complex than we know. After thinking for the past month that I've had an unhappy hamstring, it turns out that one side of my pelvis has been severely inflamed (probably for a long time, pre-yoga journey) and the pain I've been feeling is actually my adductor that I've pulled! I'm so glad that I know all of this in such detail, it just goes to show how complex our bodies are and there's always more to the story than we think#practiceandalliscoming #love #yoga #igyoga #loveyourbody

Layla Al-Naif started practicing yoga as a way to combat a longstanding illness and fell in love with the practice. Since then, she has gone on to found Yogaluls, a yoga studio that focuses on connecting the mind and body through meditation and breath. Al-Naif is also a certified holistic nutritionist and believes in the importance of healthy eating to unlock energy.