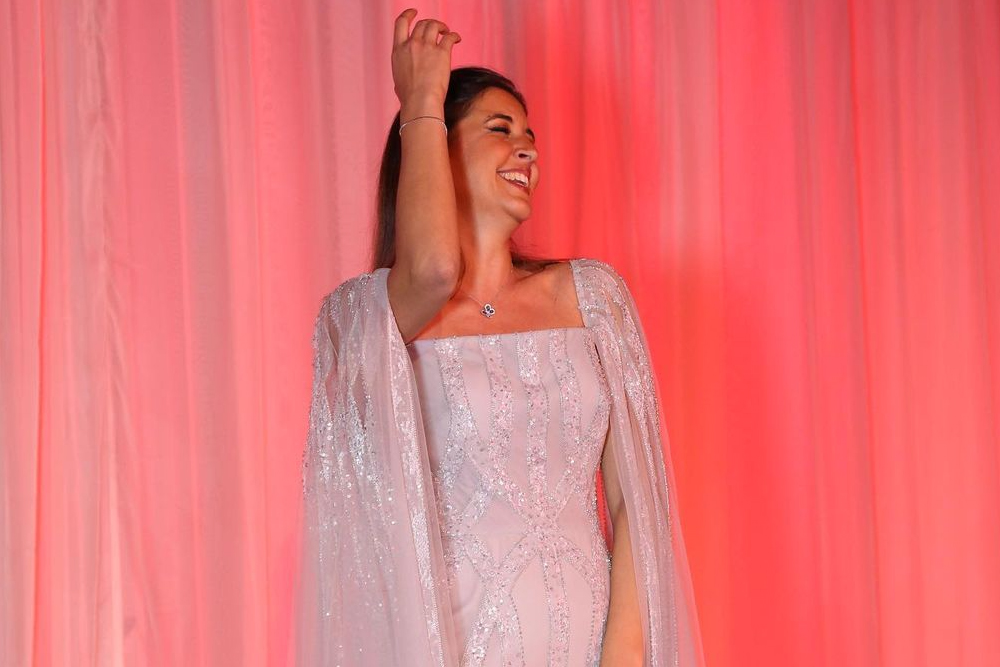 Farrah ElDibany was invited to perform the French national anthem during Emmanuel Macron’s re-election festivities. The Egyptian mezzo-soprano carried out the honour of performing “La Marseillaise” in front of a massive crowd at the Champ de Mars to celebrate the French president’s momentous win.

Macron, the first French president in 20 years to be re-elected, greeted the Paris-based ElDibany on stage after his victory speech, and he gallantly kissed the songbird on the hand after her stunning performance. The president and his wife, Brigitte, stayed on stage with ElDibany as she belted out the “La Marseillaise” acapella. And as well as wowing the crowds with her impressive vocals, the Alexandrian looked amazing in a metallic deep red strapless dress by Lebanese designer Gemy Maalouf. The gorgeous autumn/winter 2022-23 piece, along with the Macrons’ blue attire, was a nod to the French flag.

ElDibany, who performed with the Eiffel Tower’s twinkling lights as a background, seems to be having a fabulous April. She received France’s Order of Arts and Letters as a Knight earlier this month at the French embassy in Cairo. The singing sensation began making headlines when she became the first Arab opera singer to enter the Paris Opera Academy in 2016. Fluent in Arabic, English, German, French and Italian, the mezzo-soprano was also the first Arab to receive the Prix Lyrique de l'AROP, the Paris Opera’s most prestigious award. Late last year, ElDibany graced the stage at UNESCO's 75th anniversary celebrations in Paris, dazzling an audience of world leaders and dignitaries. Additionally, she held a solo performance at Dubai Opera in March 2020, just before the pandemic hit.

As a young opera singer ElDibany joined the Arts Center of the Library of Alexandria. Five years later, in 2010, she moved to Berlin to attend the Hanns-Eislet Academy of Music, and then continued her musical journey by attaining a master’s degree at the Berlin University of the Arts. An inspiration for many up-and-coming vocalists from the region, ElDibany also has a bachelor’s degree in architecture from Berlin’s Technische Universität.