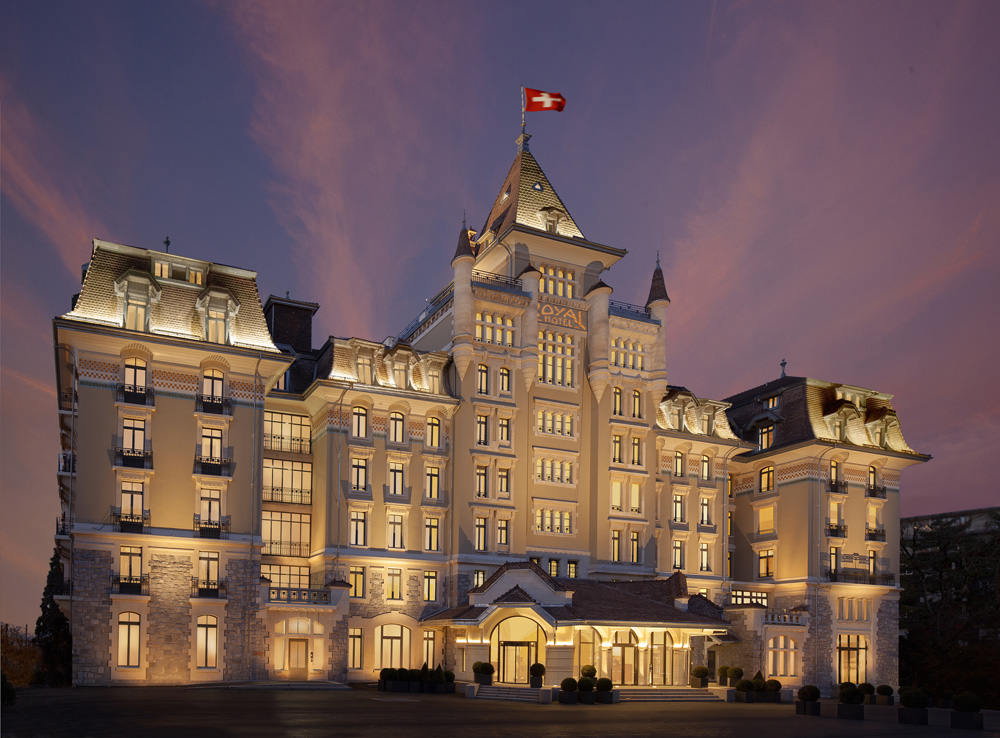 The exterior of The Royal Savoy Hotel & Spa

Dubbed the ‘Swiss Riviera’, Vaud’s magnificent landscapes are a fairytale backdrop of snow-capped Alps, the ever-serene crystal clear waters of Lake Geneva and some of the world’s prettiest of palace hotels nestled along the water.

A favourite holiday retreat for the socially elite; aristocrats, politicians, musicians, writers and the like have been venturing here to enjoy wonderful soirees of Venetian Nights, fancy-dress balls and fabulously grand social occasions ever since the period of the Golden Age.
Renowned as Vaud’s four most glamorous hotels, below is a small window into the lives of the celebrities and their hotel hideaways. 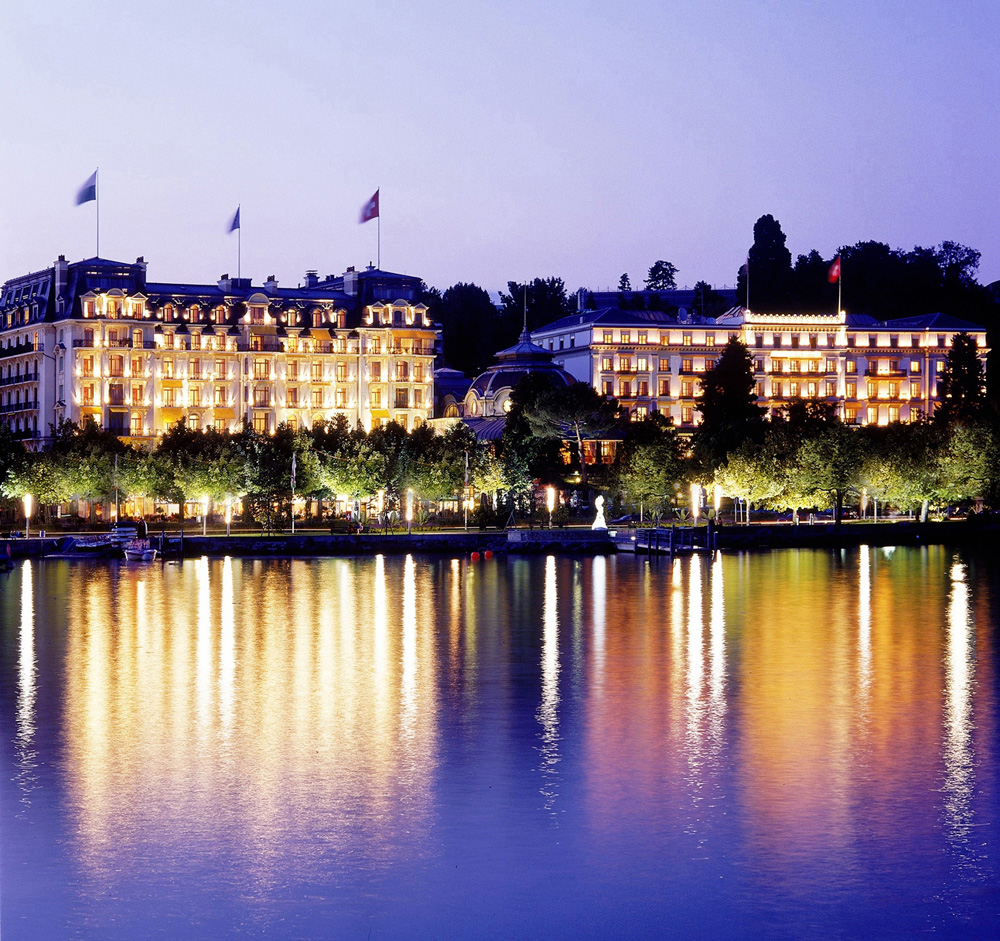 A view of Lake Geneva from the Beau Rivage Palace

It is not the marble floors and dazzling chandeliers that first throw you into a world of opulence when you first walk through the Beau Rivage’s luxurious, oversized doors. Rather, it's the scent. A rich, overpowering and sweetly addictive aroma of ‘I am in a place where the rich folk like to play’. It penetrates your nasal passages and teleports itself to the logical part of your mind, which asks ordinary individuals like myself, ‘Do I have the capital to be staying here?’ After all the likes of Coco Chanel, King Hussein and Queen Noor of Jordan and Nelson Mandela are just some of its illustrious guests.

In fact Coco Chanel used to settle here for months at a time. So smitten was she with the views of Évian-les-Bains, France, across the water, she’d skip the rooms labelled ‘garden view’ and go straight for that Lake Geneva high, room 460 to be exact.

An avid fan of all things fancy, her pooch is buried in the pet cemetery housed in the hotel’s 10-acre grounds, whilst the fabulously fashionable woman herself is buried close by in the historic cemetery of Bois-de-Vaux. Her tomb, which is always decorated with white flowers, sports a sculpture of five lions, representing her favourite number and her astrological sign, Leo.

A Belle Époque beauty, the Beau Rivage is nowadays renowned for its finely appointed suites, its spa, and its three-Michelin-star chef, Anne-Sophie Pic. If you can afford it, an evening affair in one of the ballrooms is a must. Having retained their period sumptuousness, the walls are decorated with gold leaf stucco and romantic frescoes brought to light by the dripped-in-diamonds chandeliers and the kaleidoscope of colour radiating from the domed ceiling of leaded glass. The ballroom, Salle Sandoz, is the absolute jewel having hosted many outstanding events including the negotiations of the Treaty of Lausanne to Phil Collins's wedding.
http://www.brp.ch/en/home.html 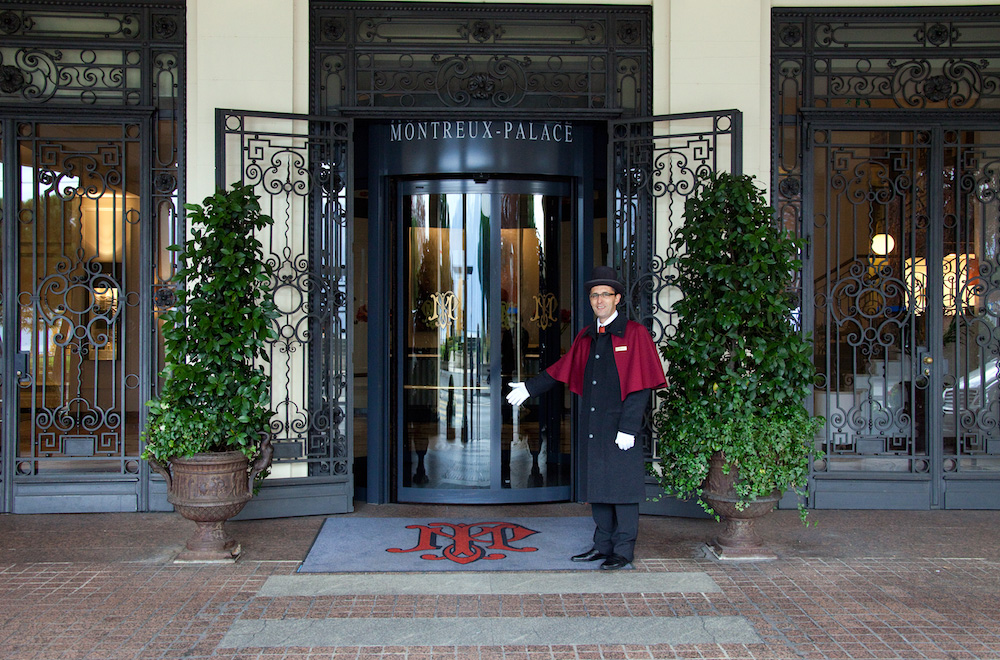 The grand dame of Montreux, which opened on the shores of Lake Geneva in 1906, is one of those classic hotels that offers guests a trip through time along with the usual comforts of fine linens and impeccable silver service.

With hallways super-sized to accommodate the ball gowns of the aristocracy from yesteryear, the hotel’s old-fashion glamour has been seducing the biggest names in music since its inauguration including: Quincy Jones, Santana, BB King, David Bowie and Prince to name a few.

Equally popular with writers, the famed Russian-American novelist, Vladimir Nabokov, loved Montreux Palace so much that him and his wife, Vera, ‘booked in’ for 16 years. The longest time anyone has ever lived in a palace hotel. 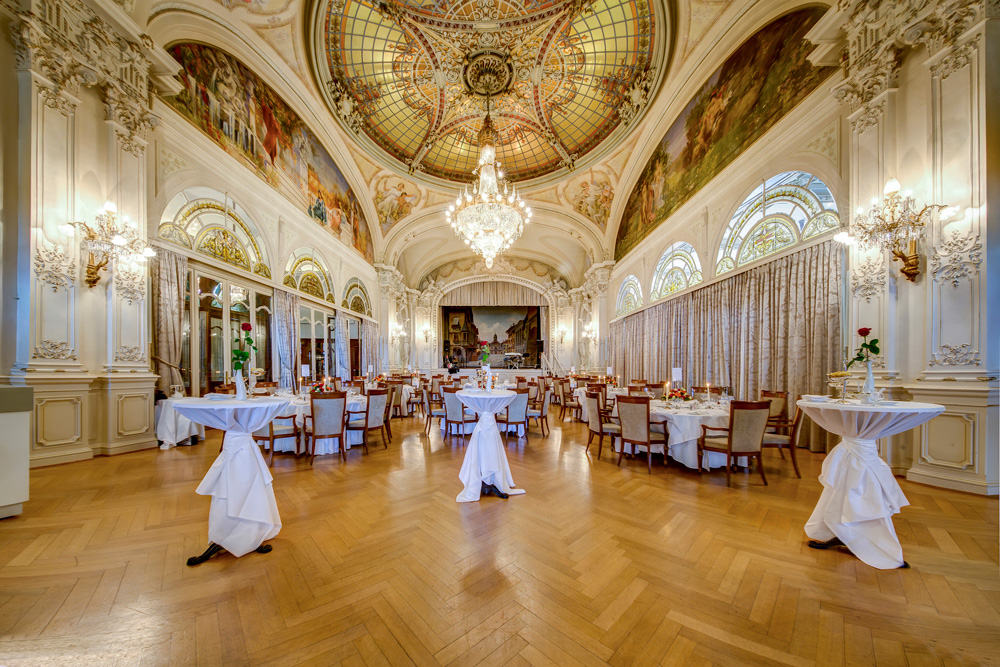 Taking up residence in a suite of rooms on the sixth floor of the “Cygne Wing,” Nabokov would spend his days writing, playing chess with Vera, and going on long walks in the mountains above Montreux to catch butterflies.

“It was love at first sight, at last sight, at ever and ever sight.” Vladimir Nabokov. A quote from the novelist’s most noted English novels, “Lolita.” Despite the quote referring to the character’s admiration, it also quite possibly reflects the love Nabokov felt for the hotel he called ‘home’ until his final breath.
http://www.fairmont.com/montreux 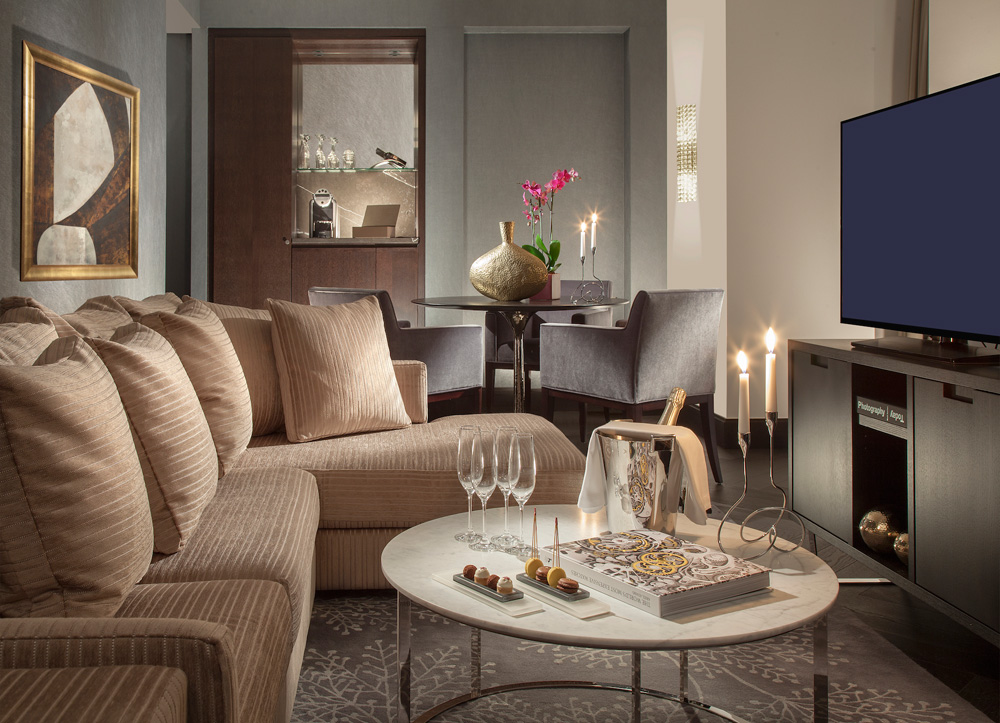 A living room at The Royal Savoy Hotel & Spa

Dating from 1909, this legendary hotel has added to the lustre of Lausanne’s fame as a refuge for royalty and aristocrats from around the world. Serving as a haven for the Spanish royal family and King Bhumibol of Thailand, it later became a popular haunt for rock royalty including Joe Cocker and Phil Collins.

After closing its doors for a whopping CHF 100 million renovation, Katara Hospitality’s deep pockets have restored it to its glory and beyond. Maintaining its elegant façade, inside is a super modern mecca equipped with a penthouse that occupies the entire top level and has its own steam room, sauna and spa. With a refurbishment like this we wouldn't be surprised if another country’s royal took up permanent residence in the not too near future.
http://www.royalsavoy.ch/en 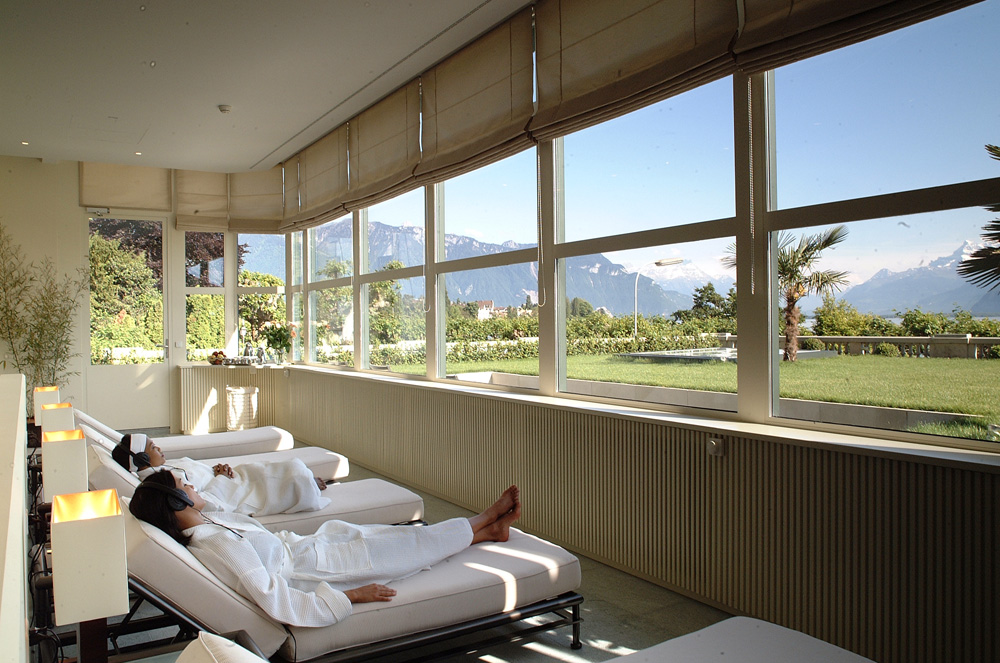 In case you wonder what sort of room reservation could possibly puzzle the receptionist at Les Trois Couronnes: in October 1859 Tsar Nicholas I took all 60 rooms on all four floors for himself and his entourage and spent the winter at Vevey. Today you have 71 rooms and suites at your service; enough space to bring some of your closest friends.
Built in 1842 on the foundations of an old Swiss Castle (the vaults of which can still be seen in the spa), this historic and award-winning hotel is set against the timeless backdrop of Lake Geneva and the beautiful Alps. Boasting the city’s largest indoor pool, be sure to stroke some laps whilst listening to the crystal clear beats of the hotel’s underwater playlist.
http://www.hoteltroiscouronnes.ch/en