With the “Prognosis:1979-2019” exhibition, Mater actively challenges perceptions and opens up alternative paths for accessing history, knowledge and meaning through his allegorical art practice. 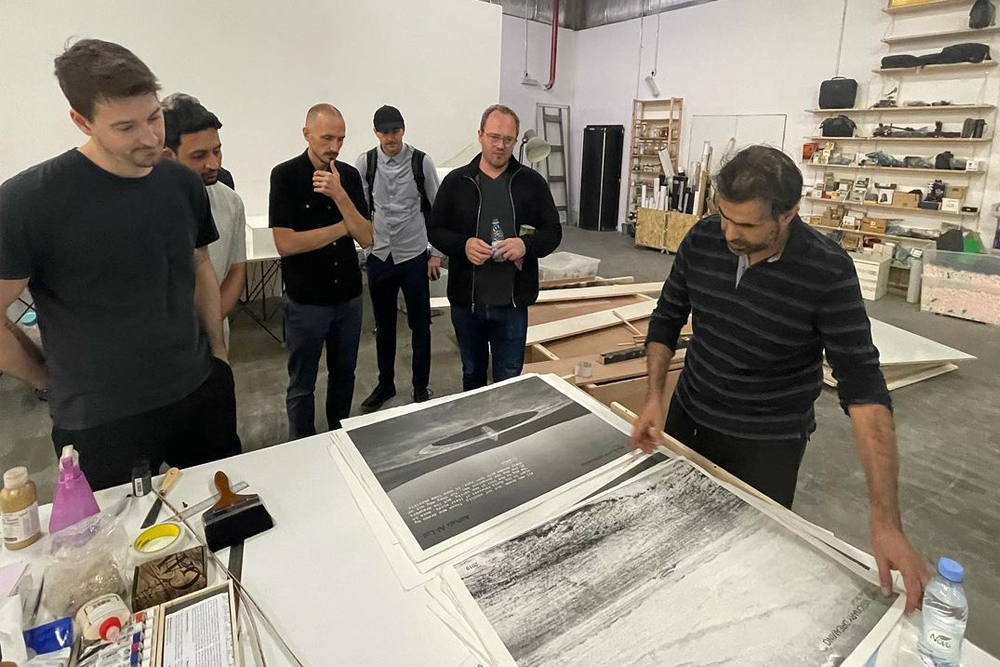 Ahmed Mater, considered one of Saudi Arabia’s most acclaimed contemporary artists, is to inaugurate Riyadh’s Lakum Artspace with his first ever solo show in the Kingdom. The exhibition by the physician turned artist, titled “Prognosis:1979-2019,” is kicking off on December 8 and will be running at the multi-functional contemporary ‘art space for all’ for two months.

The exhibition draws its inspiration from Mater’s forthcoming book, “Prognosis/Saudi Arabia: An Artist's Odyssey,” which will be globally launched during the exhibition. The book, which will be available and archived in the research library for all visitors to experience, explores his personal biography alongside historical events that occurred in Saudi Arabia and the greater Middle East, spanning 40 years.

Curated by the award-winning, New York-based Sara Raza, the expo uses the term prognosis as a metaphor for the exploration of what might be considered philosophically as an artistic set of predictions or inquiries. It allows one to rethink the ways in which cultural, political and social events have informed one another as part of a complicated multifaceted web of history and insight into the practices of contemporary life in the Kingdom in the 21st century.

“After years of research, exploration and investigation, this exhibition is a culmination of 40 years of history which hold a special place in my heart and art career. I hope that viewers take in the individuality of each work, but also appreciate the overarching essence through its message,” Mater, one of the most important cultural voices documenting and analysing the realities of contemporary Saudi Arabia, says.

Throughout “Prognosis: 1979-2019,” the Riyadh-based artist explores different themes in the 40-year period through photography, installation, video and works on paper. And it presents a chronological institutional critique of the period of new media practices, depicted through new and older works, including cassette tapes, VHS, televisions, CCTV footage and social media to document the journey from the analog to the digital era. Imagined as a compact project, the exhibition is spatially designed to reflect the meandering between history and artistic interpretation, which demonstrates how the Tabuk-born artist has employed historical qualities that were defined by both ‘facts’ and ‘fictions.’ The exhibition also features parts of Mater’s personal research materials (articles, publications, drawings and notations), which are presented as objects and living testimonies, grouped by decades. Subsequently, the exhibition is guided with four conceptual themes of Coding, Proxies, Surveillance and Whistleblowing, which have shaped the curatorial and spatial thinking behind the show.

As the first artist officially appointed by the Saudi government in 2013 to document the Holy City of Mecca, Mater’s research on migratory patterns and topology provided another view on the city’s geopolitical and spatial dynamics from an artistic, conceptual, physical and social angle.

Additionally, Mater, who was the first Saudi artist to hold a solo exhibition in the United States, worked with a classically trained Ottoman Tazhib Islamic art illumination painter to create a series of illustrated works that draw from the ancient book of moral fables, “Khalila and Dimna.” (The book became popular during the 8th century Abbasid period, also known as the Golden Age of Islam.) For these works, Mater, the Co-Founder of the Edge of Arabia collective, replaces the original animal images with symbols featured in his previous works, such as the X-Ray paintings from 2003, which included discarded medical negatives, as well as footage from drones and cameras that are inspired by recent geopolitical events and cyber surveillance. These paradoxical works highlight the language of mythology to produce an entangled map of the real, where the fact and fiction, join forces to reveal interpretations of the ‘truths.’

“With a solid footing in both the medical and art world, Mater has developed a highly respected research-based art practice that combines scientific forensic techniques alongside conceptual fine art tropes to poetically address the changing political and social landscape of the Kingdom,” curator Raza, also a writer and the Founder of the Punk Orientalism curatorial studio, says.

About Ahmed Mater
Ahmed Mater backs his socially engaged artistic practice by being involved in cultural initiatives inside the Kingdom and abroad. These include Al-Meftaha Arts Village in Abha and Jeddah’s pharan.studio. The artist is also the Co-Founder of the Edge of Arabia collective, which has connected a new generation of Saudi artists with international audiences. During its inaugural year, Mater was the CEO of Misk Art Institute, and he oversaw the first Saudi National Pavilion at the Architecture Exhibition at La Biennale di Venezia.

In 2016, Mater became the first Saudi artist to hold a solo exhibition in the United States with “Symbolic Cities: The Work of Ahmed Mater” at the Smithsonian Institution’s Arthur M. Sackler Gallery in Washington DC. And since then, has had multiple shows around the US and the world. His work is part of major international collections including London’s The British Museum and Victoria & Albert Museum, the County Museum of Art in California and Centre Pompidou in Paris.