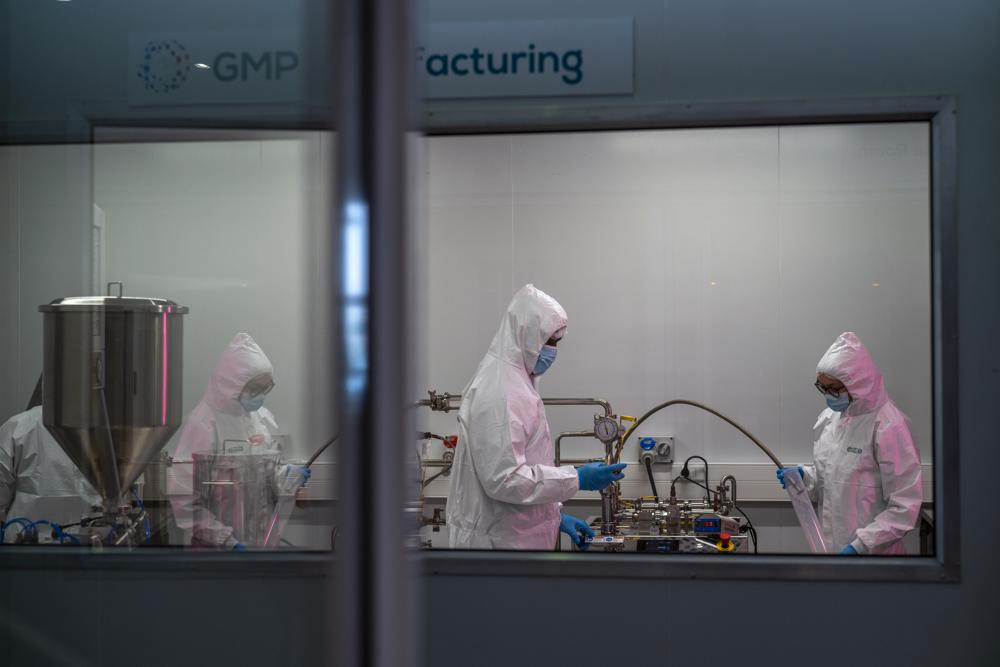 In a pair of Cape Town warehouses converted into a maze of airlocked sterile rooms, young scientists are assembling and calibrating the equipment needed to reverse engineer a coronavirus vaccine that has yet to reach South Africa and most of the world’s poorest people.

The energy in the gleaming labs matches the urgency of their mission to narrow vaccine disparities. By working to replicate Moderna’s COVID-19 shot, the scientists are effectively making an end run around an industry that has vastly prioritized rich countries over poor in both sales and manufacturing. 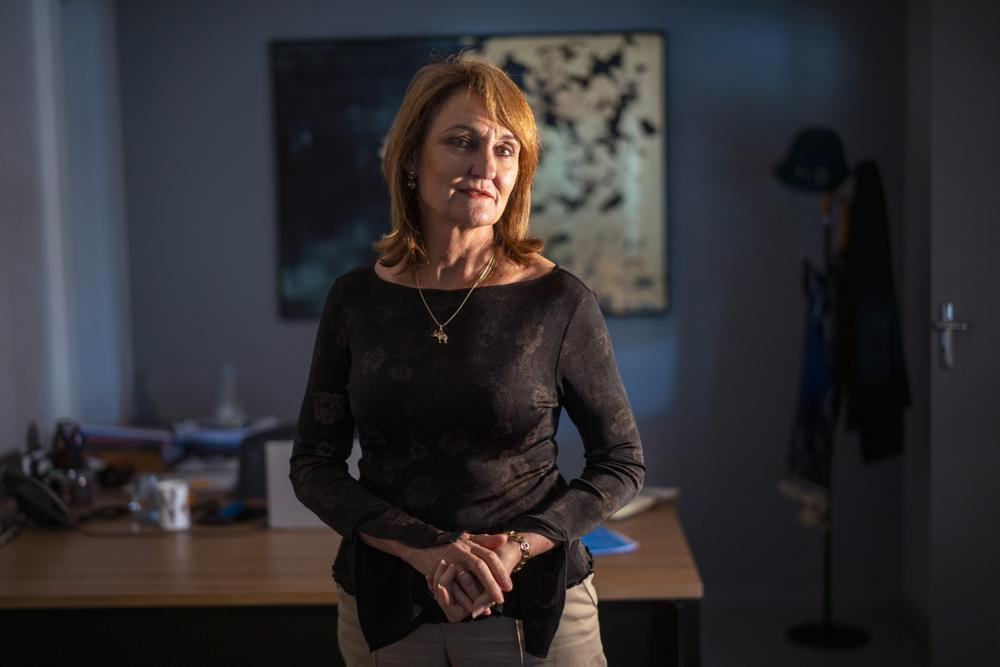 And they are doing it with unusual backing from the World Health Organization, which is coordinating a vaccine research, training and production hub in South Africa along with a related supply chain for critical raw materials. It’s a last-resort effort to make doses for people going without, and the intellectual property implications are still murky.

“We are doing this for Africa at this moment, and that drives us,” said Emile Hendricks, a 22-year-old biotechnologist for Afrigen Biologics and Vaccines, the company trying to reproduce the Moderna shot. “We can no longer rely on these big superpowers to come in and save us.”

Some experts see reverse engineering — recreating vaccines from fragments of publicly available information — as one of the few remaining ways to redress the power imbalances of the pandemic. Only 0.7% of vaccines have gone to low-income countries so far, while nearly half have gone to wealthy countries, according to an analysis by the People’s Vaccine Alliance. 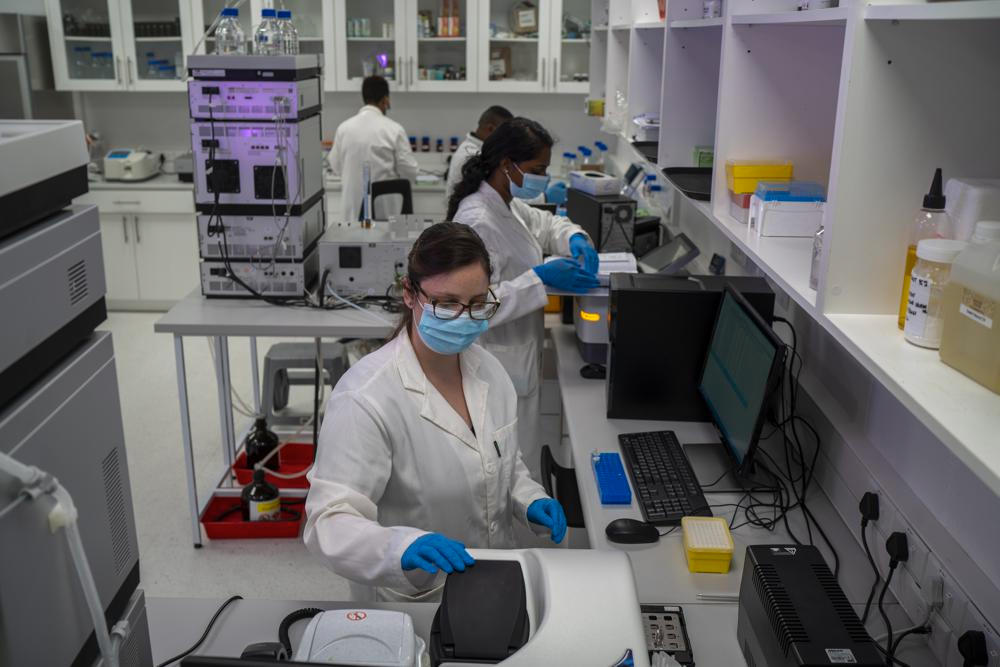 That WHO, which relies upon the goodwill of wealthy countries and the pharmaceutical industry for its continued existence, is leading the attempt to reproduce a proprietary vaccine demonstrates the depths of the supply disparities.

The U.N.-backed effort to even out global vaccine distribution, known as COVAX, has failed to alleviate dire shortages in poor countries. Donated doses are coming in at a fraction of what is needed to fill the gap. Meanwhile, pressure for drug companies to share, including Biden administration demands on Moderna, has led nowhere.

Until now, WHO has never directly taken part in replicating a novel vaccine for current global use over the objections of the original developers. The Cape Town hub is intended to expand access to the novel messenger RNA technology that Moderna, as well as Pfizer and German partner BioNTech, used in their vaccines. 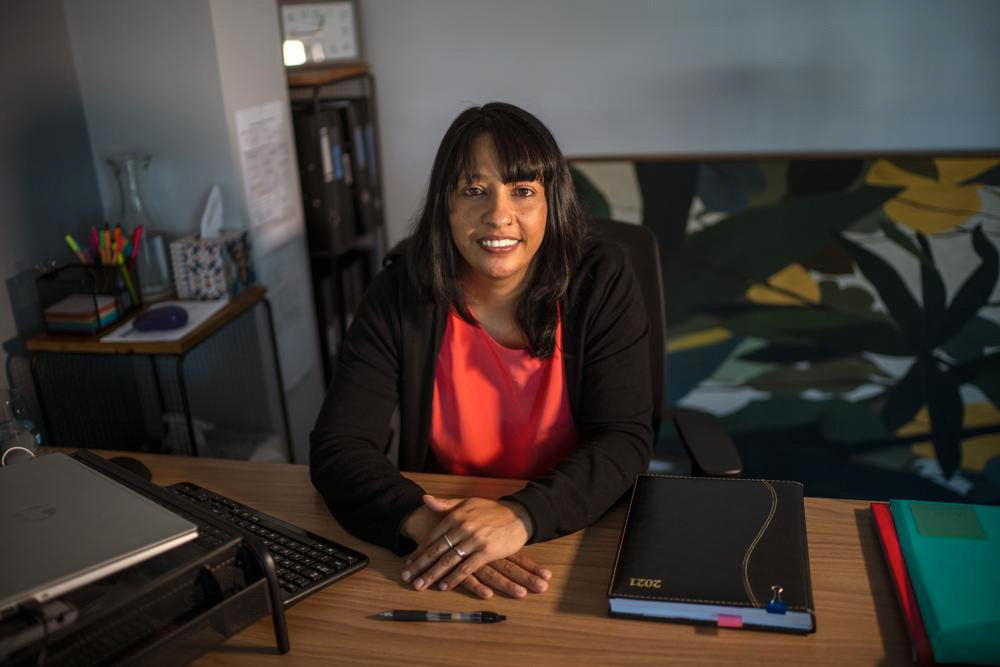 “This is the first time we’re doing it to this level, because of the urgency and also because of the novelty of this technology,” said Martin Friede, a WHO vaccine research coordinator who is helping direct the hub.

Dr. Tom Frieden, the former head of the U.S. Centers for Disease Control and Prevention, has described the world as “being held hostage” by Moderna and Pfizer, whose vaccines are considered the most effective against COVID-19. The novel mRNA process uses the genetic code for the spike protein of the coronavirus and is thought to trigger a better immune response than traditional vaccines.

Arguing that American taxpayers largely funded Moderna’s vaccine development, the Biden administration has insisted the company must expand production to help supply developing nations. The global shortfall through 2022 is estimated at 500 million and 4 billion doses, depending on how many other vaccines come on the market.

“The United States government has played a very substantial role in making Moderna the company it is,” said David Kessler, the head of Operation Warp Speed, the U.S. program to accelerate COVID-19 vaccine development.

Kessler would not say how far the administration would go in pressing the company. “They understand what we expect to happen,” he said.

Moderna has pledged to build a vaccine factory in Africa at some point in the future. But after pleading with drugmakers to share their recipes, raw materials and technological know-how, some poorer countries are done waiting. 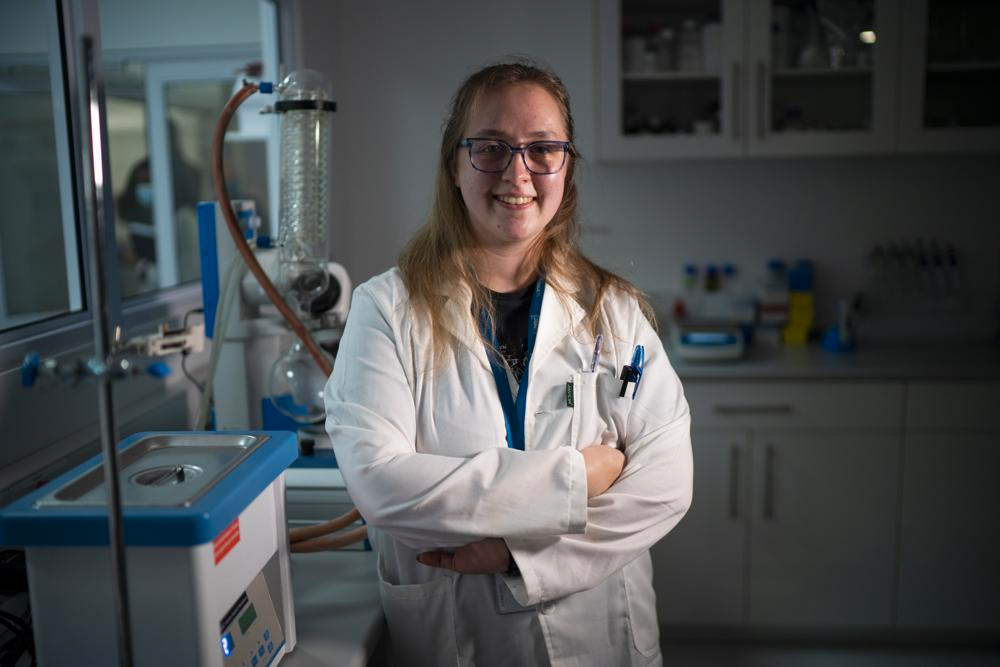 Afrigen Managing Director Petro Terblanche said the Cape Town company is aiming to have a version of the Moderna vaccine ready for testing in people within a year and scaled up for commercial production not long after.

“We have a lot of competition coming from Big Pharma. They don’t want to see us succeed,” Terblanche said. “They are already starting to say that we don’t have the capability to do this. We are going to show them.”

If the team in South Africa succeeds in making a version of Moderna’s vaccine, the information will be publicly released for use by others, Terblanche said. Such sharing is closer to an approach U.S. President Joe Biden championed in the spring and the pharmaceutical industry strongly opposes.

Commercial production is the point at which intellectual property could become an issue. Moderna has said it would not pursue legal action against a company for infringing on its vaccine rights, but neither has it offered to help companies that have volunteered to make its mRNA shot. 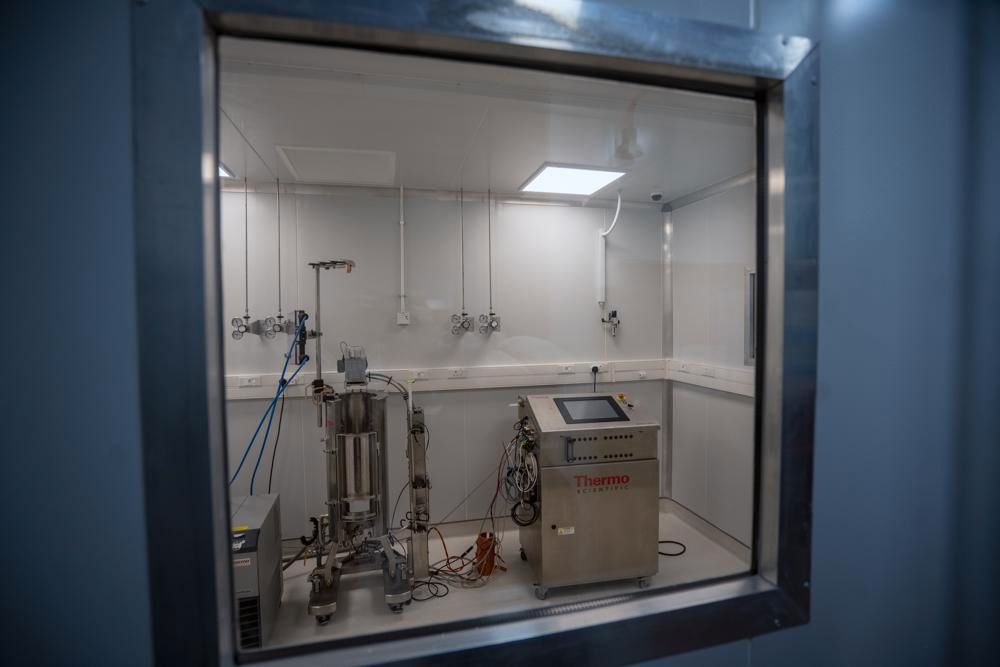 Chairman Noubar Afeyan said Moderna determined it would be better to expand production itself than to share technology and plans to deliver billions of additional doses next year.

“Within the next six to nine months, the most reliable way to make high-quality vaccines and in an efficient way is going to be if we make them,” Afeyan said.

Zoltan Kis, an expert in messenger RNA vaccines at Britain’s University of Sheffield, said reproducing Moderna’s vaccine is “doable” but the task would be far easier if the company shared its expertise. Kis estimated the process involves fewer than a dozen major steps. But certain procedures are tricky, such as sealing the fragile messenger RNA in lipid nanoparticles, he said. “It’s like a very complicated cooking recipe,” he said.

“Having the recipe would be very, very helpful, and it would also help if someone could show you how to do it.”

A U.N.-backed public health organization still hopes to persuade Moderna that its approach to providing vaccines for poorer countries misses the mark. Formed in 2010, the Medicines Patent Pool initially focused on convincing pharmaceutical companies to share patents for AIDS drugs. 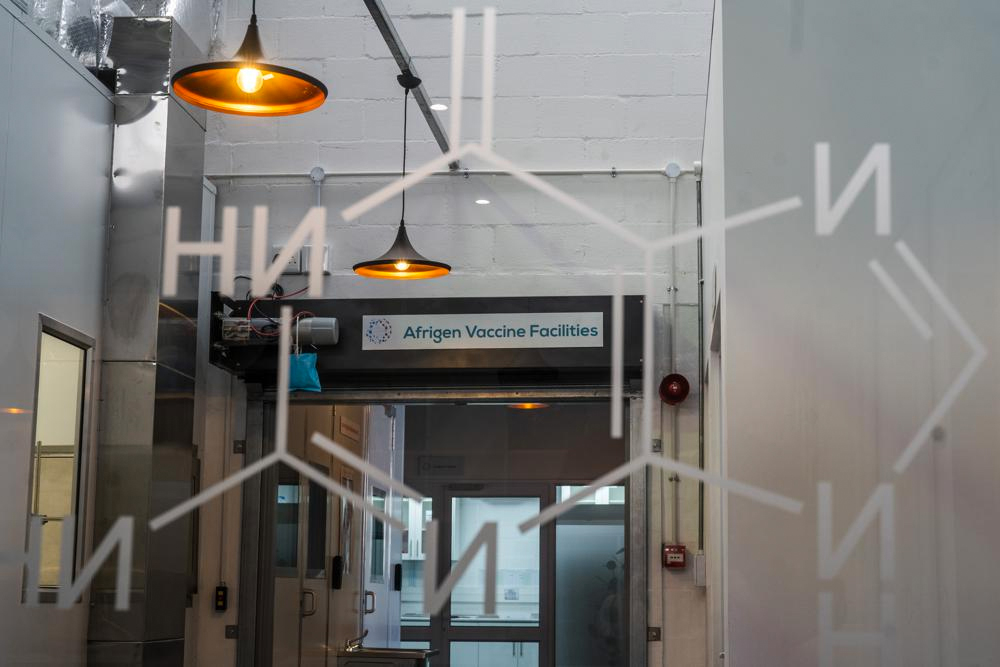 “It’s not about outsiders helping Africa,” Executive Director Charles Gore said of the South Africa vaccine hub. “Africa wants to be empowered, and that’s what this is about.”

It will eventually fall to Gore to try to resolve the intellectual property question. Work to recreate Moderna’s COVID-19 vaccine is protected as research, so a potential dispute would surround steps to sell a replicated version commercially, he said.

“It’s about persuading Moderna to work with us rather than using other methods,” Gore said.

He said the Medicines Patent Pool repeatedly tried but failed to convince Pfizer and BioNTech to even discuss sharing their formulas.

Rep. Raja Krishnamoorthi, who is among the members of Congress backing a bill that calls on the United States to invest more in making and distributing COVID-19 vaccines in low- and middle-income countries, said reverse engineering isn’t going to happen fast enough to keep the virus from mutating and spreading further.

“We need to show some hustle. We have to show a sense of urgency, and I’m not seeing that urgency,” he said. “Either we end this pandemic or we muddle our way through.”

Campaigners argue the meager amount of vaccines available to poorer countries through donations, COVAX and purchases suggests the Western-dominated pharmaceutical industry is broken.

“The enemy to these corporations is losing their potential profit down the line,” Joia Mukherjee, chief medical officer of the global health nonprofit Partners in Health, said. “The enemy isn’t the virus, the enemy isn’t suffering.”

Back in Cape Town, the promise of using mRNA technology against other diseases motivates the young scientists.

“The excitement is around learning how we harness mRNA technology to develop a COVID-19 vaccine,” Caryn Fenner, Afrigen’s technical director, said. But more important, Fenner said, “is not only using the mRNA platform for COVID, but for beyond COVID.”