The Kingdom continues to establish its international culinary arts credentials by signing MoU with Slow Food, known for working to make good, clean and fair food accessible to everyone 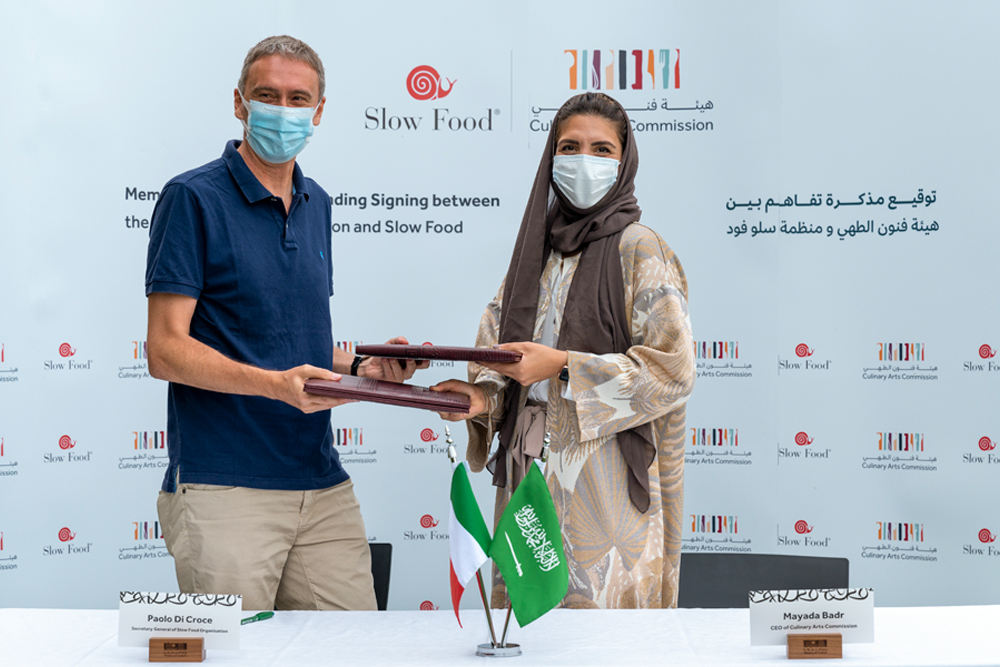 As part of a push to enhance sustainable and healthy food production and consumption across Saudi Arabia, the Saudi Culinary Arts Commission has signed a memorandum of understanding (MoU) with Slow Food. The new formal agreement was signed in Pollenzo, Italy with Paolo di Croce, the renowned sustainable food movement’s Secretary-General.

“I am delighted to be in Italy, the home of the Slow Food movement - and arguably the home of one of the greatest culinary cultures in the world. As a chef, and a food enthusiast, I am always looking for quality raw ingredients that taste good, are produced with minimal impact on the planet and benefit both producer and consumer,” Mayada Badr, the CEO of the Saudi Culinary Arts Commission, said. 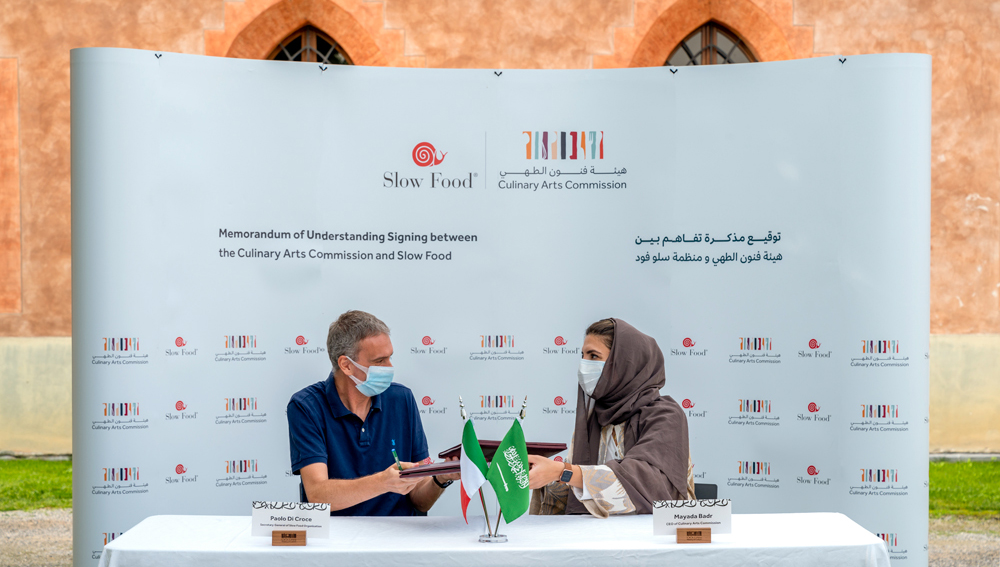 The head of the commission, who has been forging partnerships to support and develop Saudi’s burgeoning food sector, added Italy and Saudi Arabia have a lot to share with the two countries’ love for food and the principle behind the slow food movement. Badr described the latter as “an appreciation of locally grown, sustainable and seasonal produce and the consumer habits that support this.” The culinary whizz also said she was honoured they will be developing Slow Food communication materials in Arabic for the first time, which will help chefs, amateur cooks and food producers to get to know Slow Food’s beliefs and methods.

One part of the MoU looks at including Saudi farmers’ markets in the global Slow Food Earth Market list. A new farmers’ market concept was launched in the spring of 2021, held in Riyadh and other cities and towns across the Kingdom. The markets were hugely popular and will be returning in the autumn. 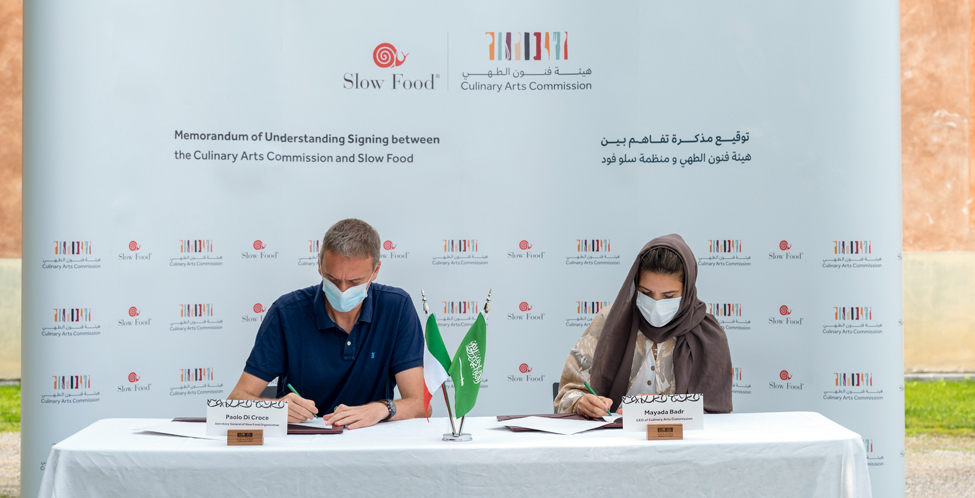 Additionally, up to 60 Saudi food items, including eqet and qifer will be registered in the Slow Food catalogue, the “Ark of Taste,” which aims to preserve endangered ingredients and products. Plus, travellers will be able to identify Saudi culinary tours with greater ease through the Slow Food Travel platform, enabling foodies to experience the variety of Saudi cuisine across its 13 regions.

The MoU identifies a range of areas for cooperation between the two organisations, including the development of regional professional networks and the establishment of pilot food workshops using Slow Food methodologies. Their design and installation will be guided by the expertise of international food businesses. There will also be training programmes for Saudi chefs, broader training opportunities around Slow Food concepts and specialist seminars developed to share the expertise and knowledge of the Slow Food movement. 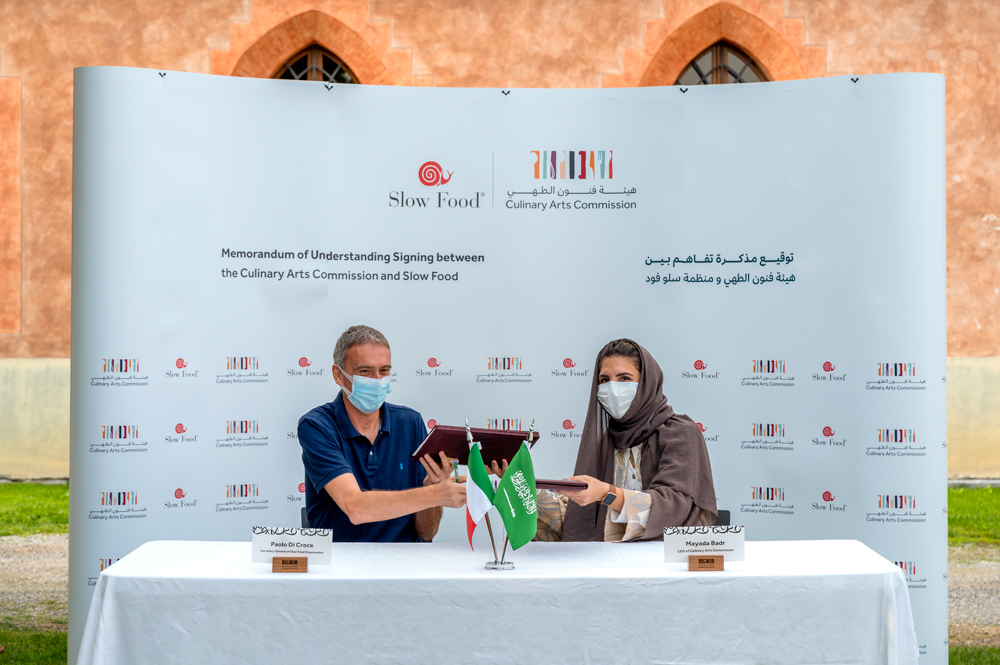 "The strategic plan for this collaboration with the Culinary Arts Commission will be the first milestone in the creation of a new Slow Food network in Saudi Arabia, aiming to preserve and promote the country’s local, authentic culinary heritage,” di Croce said. “Being present in this specific historical moment and being able to contribute to the strategic choices for a future that moves towards sustainable small-scale production, as well as activities that safeguard traditions and knowledge and also enhance the resources of the territory, could really make a significant difference.”

The Slow Food agreement builds on other international partnerships forged in 2021 by the Culinary Arts Commission, which was founded in 2020 to lead the development of the Kingdom’s culinary arts sector. This includes the one with household recognised Le Cordon Bleu cooking school.

The Kingdom’s rich culinary heritage is founded in traditions from each of its 13 regions, resulting in a truly diverse culinary landscape. Today, food and culinary arts continue to be integral to Saudi culture and heritage, but this has, until recently, remained little known in the wider world. As a new generation of talent emerges in the Kingdom, supported by the Culinary Arts Commission, the world is beginning to see and experience the variety and talent across the sector. 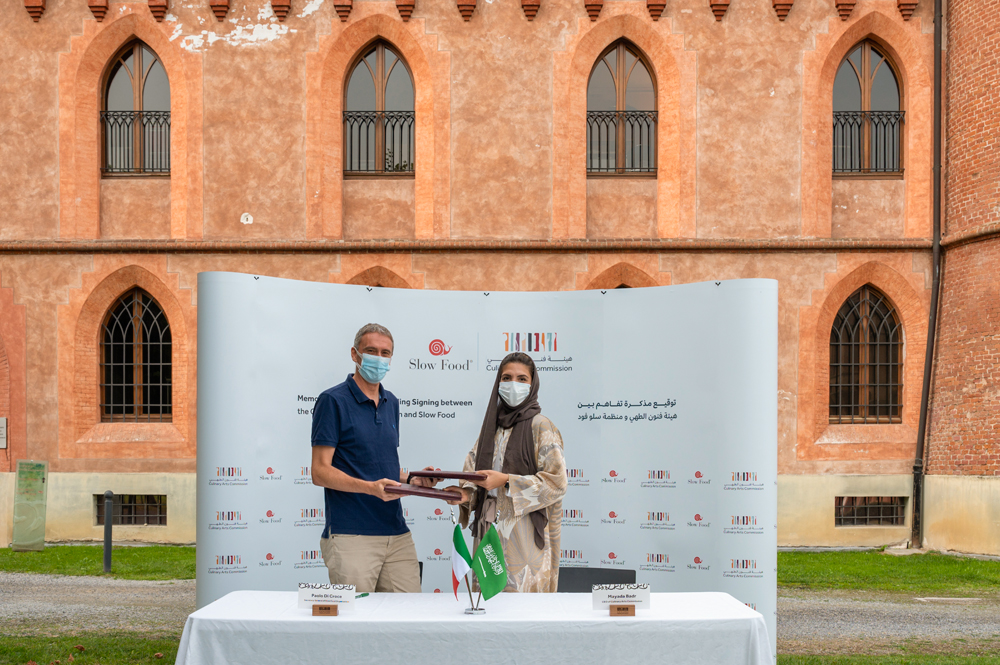 About Slow Food Slow
Slow Food is a worldwide network of local communities founded in 1989 in order to counteract the disappearance of local food traditions and the spread of fast-food culture. Since then, Slow Food has grown to become a global movement that involves millions of people in over 160 countries. The Slow Food ethos is based on people being able to access and enjoy food that is good for them, good for those who grow it and good for the planet. The approach ensures that the high quality and healthy food is produced in a way that does not harm the environment and is sold at prices that are fair for consumers and producers alike.