Dania Akeel writes history again! The sky is the limit for the Saudi who cemented the impressive title. 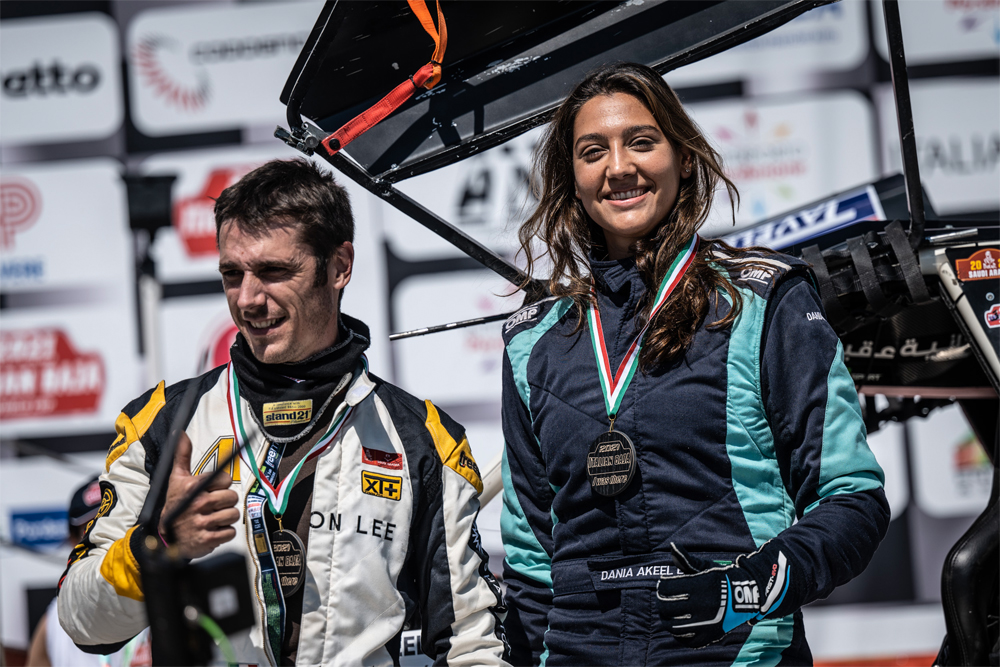 Dania Akeel has made history as the first Arab woman to win in the T3 category at the Fédération Internationale de l’Automobile’s (FIA) World Cup for Cross-Country Bajas, held in northern Italy. The top female Saudi racer was crowned as an FIA T3 Drivers’ Champion following a hard-earned fourth place in the category that is for Lightweight Prototype Cross-Country Vehicles.

For her championship debut, Akeel, who slipped briefly into fifth position, managed to score 103 points while driving an RM Sport Mamba. The go-getting contestant bested distinguished drivers from Russia, Spain, France, the Netherlands, Britain and Portugal, according to the official Saudi Press Agency.

The delighted Akeel, who first took part in the competition at the Sharqiyah Baja 2021, the third round of the World Cup, under the supervision of the FIA and the Saudi Arabia Motor Federation, dedicated her achievement to Saudi Arabia. The 32-year-old, also the first Saudi woman to obtain a Speed Bikes Competition license, thanked the Kingdom’s Ministry of Sports, the Saudi Federation of Cars and Motorcycles and sponsors for their “unlimited support.”

During the two-day Italian off-road classic, Akeel, who did some training with top French pilot Christian Lavieille, delivered a calculated performance over the five demanding gravel stages across riverbeds and glacial flood plains, helping her earn more essential points.

“I could not have done this without my co-driver, RM Sport and the Saudi Motor Sports Federation. They informed me and educated me about the sport and how to go about it. That was priceless knowledge. Everyone involved has contributed towards this fantastic achievement and I’m extremely grateful for the support,” Akeel, who partnered with Frenchman Stéphane Duple, was quoted as saying in “Automobile Sport.”

The speed lover has had victories in Saudi Arabia and Jordan, as well as claiming a double podium in Hungary and Poland respectively. And she is now armed with enough experience to participate in the upcoming Dakar Rally. As she concentrates on preparing for the world-famous rally, one thing Akeel knows for sure is that she will have all the love and encouragement she needs as it will be taking place in her homeland in January 2022.

Akeel certainly hasn’t let the serious injury she sustained stop her from making an amazing comeback and achieving her goals. The talented racer, who wrote a book called “Freefall” while recovering, has also completed in bike rallies. During her first season, she nabbed the Rookie of the Year trophy at the Ducati Cup in the UAE National Sportsbike Superseries 2019/2020.

About the FIA World Cup for Cross-Country Bajas
Now in its third season, the Fédération Internationale de l’Automobile’s World Cup for Cross-Country Bajas is an annual competition for Baja-style rally raid events for cars, buggies and side-by-sides. The competition is a 350-kilometre long cross-country rally race taken on by a team of drivers, with each round hosted in a different city around the globe. Awards are given to drivers, co-drivers as well as teams.