Is the 'workcation' trend here to stay? 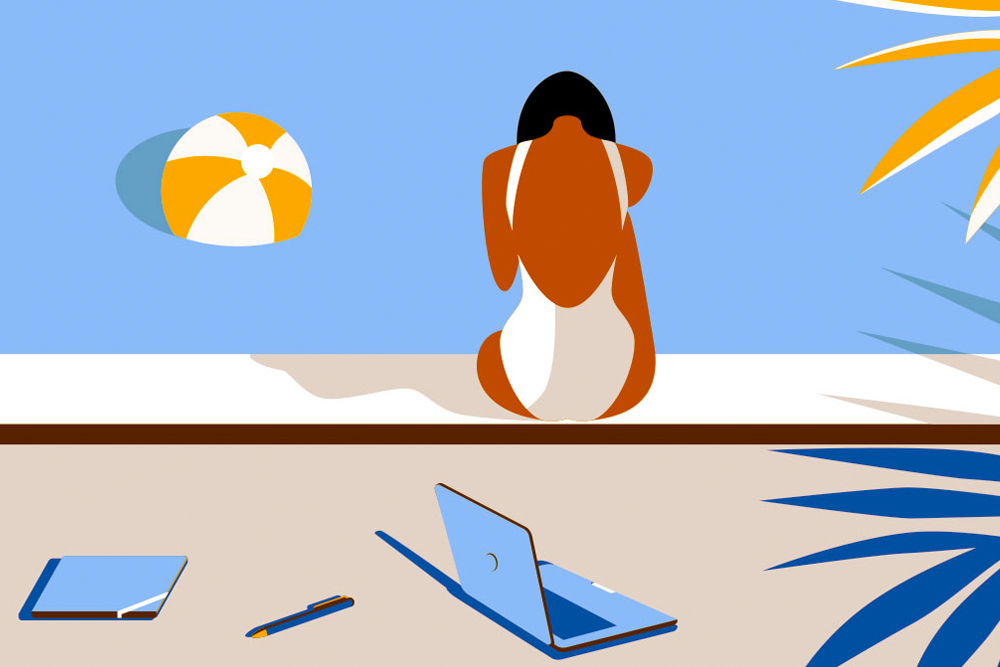 Drawn by sun, sea and speedy Wi-Fi, remote workers are converging on Europe's southernmost islands to try "workcationing" before employers order them back to the office, giving battered tourism businesses a welcome boon. Olga Paul, 34, came to the Spanish island of Gran Canaria in May to work remotely for the first time, after long pandemic months cooped up in her flat in Munich, where she is a business analyst for one of Germany's largest car manufacturers.

"I think I'm more productive now," she said, delighted with the sea view from her rooftop, where she goes for breaks. "I can concentrate on my work and explore the islands on the weekends ... it feels great." Combining holiday destinations with remote work is a growing trend in Spain and Portugal's sunniest archipelagos, as travel bans ease, and the starved tourism industry offers discounted stays and dedicated workspaces.

"We have certainly seen a growth in the 'Digital Nomads' category, (which) has been important to the tourism sector during the pandemic since it contributed to long-term stays and local economies," said Jennifer Iduh, head of research at the European Union's tourism body. The remote workers register as tourists, making them hard to quantify, but evidence of their presence is ubiquitous, from new co-working spaces sprouting up to stickers advertising free, extra-powerful Wi-Fi in many restaurants, cafes and bars.

However, the influx is but slight relief to the tourism-reliant islands: Spain's first half arrivals were still just a third of the 10 million in the same period of 2019.

SURF AND ZOOM
Still, local associations in the Canary Islands or Portugal's Madeira said the number of people coming to work remotely surged, even in the more expensive peak season. The "Nomad List" website counted the Canary island of Tenerife among the 10 fastest-growing destinations for teleworking in the first seven months of 2021, after the trend began last year.

"By (last) summer, I could see more and more people starting to come, not for holidays or living permanently but to work for six weeks, two months, three months," said Nele Boesmans, a Belgian native living in Fuerteventura, the second largest of the Canary Islands.

Membership of the "Digital Nomads Fuerteventura" Facebook group Boesmans runs quintupled during the pandemic. Airlines and rental websites said bookings from mainland Europe, which ticked up last summer, are shooting up now.

Flights to the Canary Islands were up 88% between April and July of this year versus the same period in 2020, low-cost carrier Ryanair said, while bookings for Tenerife doubled. The trend should continue, a Ryanair spokeswoman said, noting that June sales of one-way tickets to the Canaries were 32% up on May and 74% up on June 2020.

Rental requests for over 15 days in the Canary, Balearic and Madeira islands grew 51% last summer, according to property portal Idealista, which forecast bookings would keep the pace in 2021.

"I call them corporate nomads," said Ignacio Rodriguez, who presides a Canary Islands association of co-working spaces and saw a particular boom in temporary teleworkers, most from France.

Around 8,000 remote workers have come in the first half of this year, the Canaries' tourism office estimated, with an additional 30,000 expected in the next 5 years. In Madeira, authorities created an office to advise remote workers, expecting 500 requests - but receiving 8,000 since February.

"Hotel managers didn't know about remote workers but now the word is so common for them," said Micaela Vieira, manager of Madeira's "Digital Nomad" project.

"They were people aged 25-45, working remotely, coming from Madrid, Paris, Rome, Milan, who'd thought, 'Why not work somewhere warmer?,'" Leoni said. "In the Canaries, there's so much space that social distancing is a given."

COCO will open in mid-September, with Leoni hoping 8-10 permanent subscribers will enjoy its relaxation zones, garden, cafe and acoustically-isolated cabins.

SPECIAL OFFERS
Spanish airline Iberia launched a 10% discount for those keen to make the most of remote working's possible final months from a temporary perch in the Canary Islands. Hotel chains Melia and Vincci are offering discounted package deals for remote workers looking to stay several weeks, with Melia's campaign called "Work in Heaven."

"Since (Spain's) state of emergency ended and mobility between regions began, the service is in higher demand," Vincci said in an email. Croatia and Greece also jumped on the bandwagon, developing special visas for sun-starved remote workers, with Croatia touting its idyllic landscapes as "Your new office" in its promotional campaign.

"Dubai's average occupancy in 1-5 star properties is approaching 60% ... strongly supported by apartments ... suggesting people are looking for long-term options, in line with choosing to work from here," Kazim added.

Whether the trend survives this autumn's sweep of back-to-office mandates is another question, especially given the success of vaccination campaigns in some regions. Some, though, hope to return to the islands - or maybe just stay.

"Everybody who I met trying it absolutely loves it," said Alexander Swanton, a U.S. freelance screenwriter who surfs in his spare time in Gran Canaria, where he settled after leaving an insurance job last October. Nor is Joao Santos ready to relinquish his after-work beach trips. "I'm not going to be forced back into an office anytime soon," vowed the Portuguese web developer working remotely for the first time in Madeira.