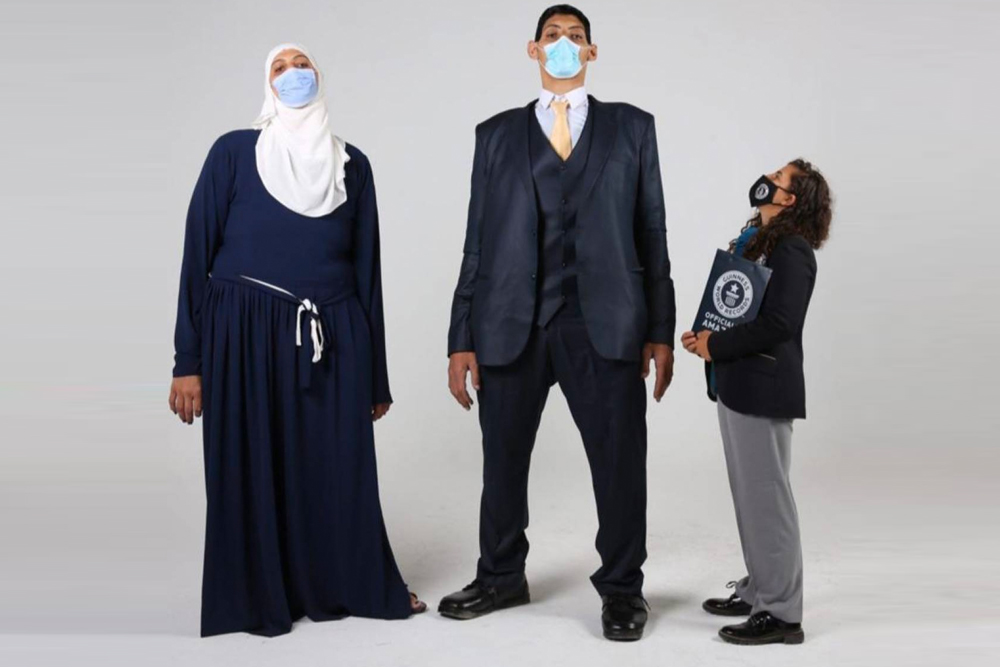 Together, Huda and Mohamed have a combined height of 414.4 cm (13 ft 7 in), and to put it into perspective, they are nearly as tall as a London double-decker bus together! 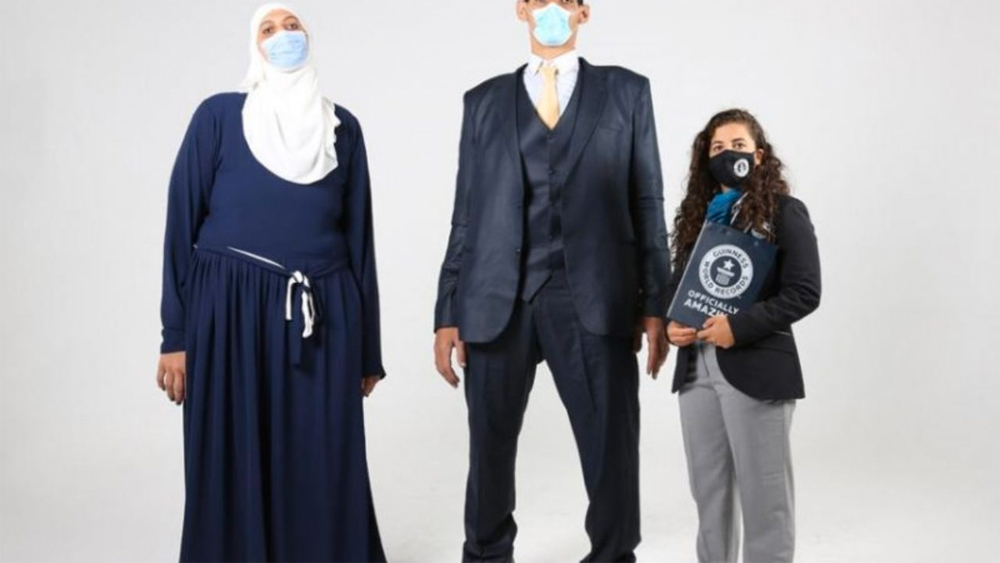 Kenzy Defrawy, Guinness World Records Adjudicator, presented Huda and Mohamed with the official titles at a medical clinic in Cairo, Egypt, while adhering to all social distancing and travel restrictions in place. The family of the record-breaking pair were present, alongside Professor of Orthopedic Surgery, Dr Khaled Emara and his medical staff Dr Mahmoud El Shopaky and Dr Mohamed Nour.

Huda and Mohamed both live with their mother, Mrs. Rouhiya Abdulaziz, in a small village 90 minutes outside the Egyptian capital, Cairo. They are believed to be suffering from a benign tumor in their pituitary glands causing an excess production of growth hormones.

Born in January 1991, Huda’s childhood felt normal, until at the age of 12, she realized she was growing taller than most of her peers. Local orthopedists diagnosed the case as a benign tumor in the pituitary glands which affected her natural growth. Huda did not complete her studies, but she is proud to be recognized by Guinness World Records™ for multiple records, expressing great happiness the moment she heard the news of her obtaining these world titles.

"I could not live my life as other women did,” says Huda. “I hope the recognition of Guinness World Records™ would change my life forever. I have always dreamed of dressing like other women, but I accept myself now and live with satisfaction and conviction.” 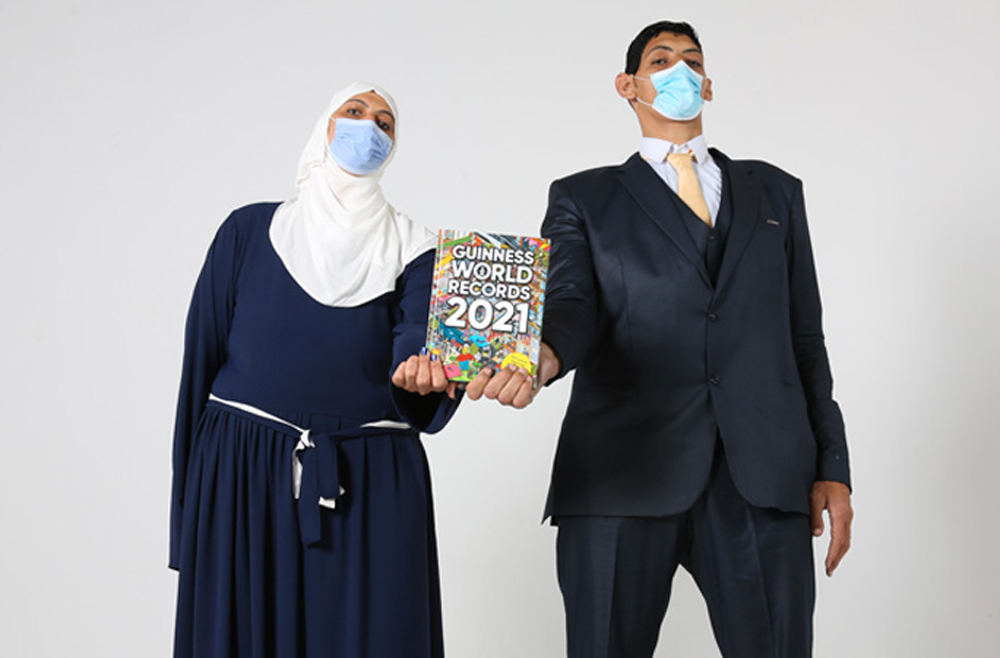 "Since the age of twelve, my life has been turned upside down," Mohamed added, whose diagnosis was also made at the age of 12. "I was not used to the new lifestyle of tall people. Everything seems small in my hands, even shaking hands with people has become a reminder of how I differ from others."

After the "Terzi" in their hometown, a local name for a tailor in Egypt, customizes a male dress ‘Galabiyah’ and a female dress for the two siblings, they would need to return the following year to do alterations to the edges of these clothes to match their new height. Mohamed says, "My height continues to grow every year, about 3 to 4 centimeters, and my limbs are growing unreasonably." Huda also added, "I have never seen a situation like myself and my brother's anywhere else in the world.” 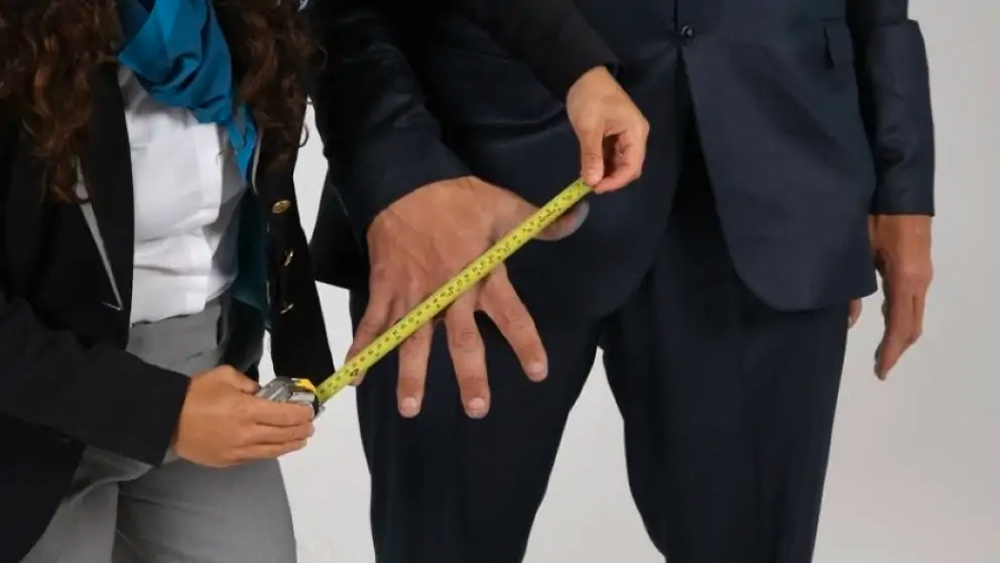 Both Huda and Mohamed are still growing in height, and they may need to undergo an operation to stop their growth as soon as possible. In a similar case to that of Sultan Kösen, the Tallest man living, in 2012 when he underwent an operation at the University of Virginia to treat a similar condition known as acromegaly, which develops when a benign tumor of the pituitary gland produces too much growth hormone. If the condition begins before puberty it can also lead to gigantism, as is the case with Huda and Mohamed.