The civil rights attorney has been motivated by the profoundly personal impact the criminal justice system has had on her own life. 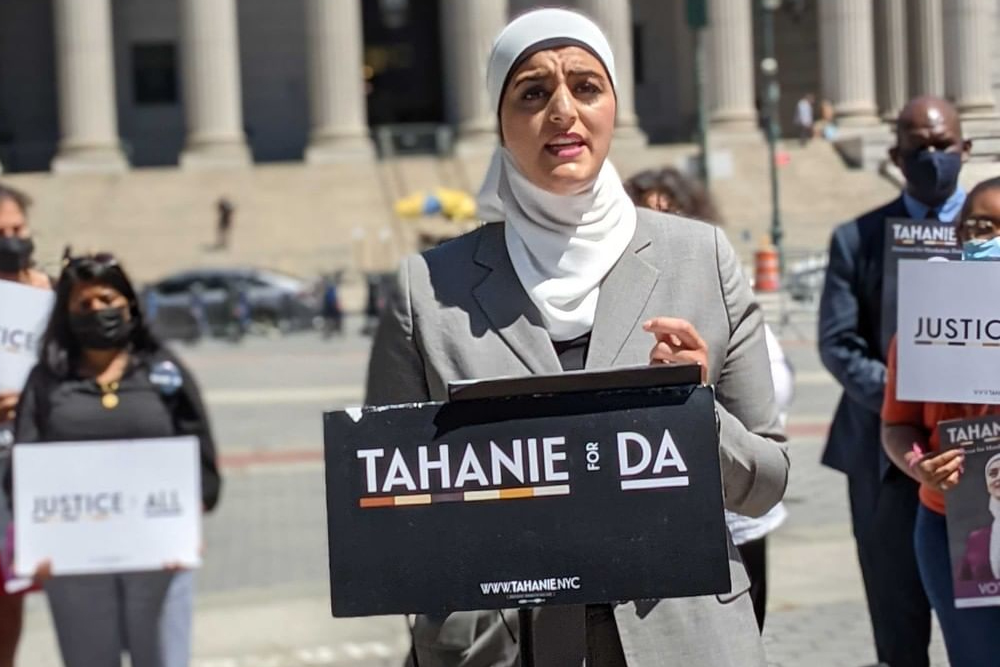 Tahanie Aboushi is in the race to become Manhattan’s next district attorney (DA). If the Palestinian-American civil rights attorney succeeds in becoming the chief prosecutor, one of the most influential positions in American politics, she will make history as the first woman and first Muslim DA in the New York City borough. Aboushi will also be the first person of colour to hold the office, which has traditionally been filled by white males.

The standout progressive in the competitive race is one of eight candidates, including another woman of colour, running in the June 22 Democratic primary. Vying to succeed Cyrus Vance, Jr., who is retiring at the end of year, the winning candidate will have to power to decide which cases will be pursued, whether it’s in Wall Street, the swish Upper East and West sides or buzzing Harlem.

“We have the most diverse cross-sectional support system – more than any other candidate. We can have a safe and fair justice system and accomplish accountability in a way that’s focused on rehabilitation and preventative measures,” the confident 34-year-old hijabi told “The Guardian.” “People trust us. People hear my story and read about the work that I’ve done.

On a mission to tackle issues like bigotry, prejudice, police brutality and malicious prosecution, Aboushi feels the focus should be on the root problems of criminal misdemeanours like substance abuse, homelessness, poverty and mental illness. She wants to create a council of academics, social workers, psychologists, law enforcement, prosecutors and defense attorneys to settle on alternatives to prosecution. She also wants to redistribute funds to finance treatment and prevent habits from forming. She hopes to invest some of the office’s federal asset forfeiture into community-based organizations that are already working to help those combating the kind of problems mentioned above.

Aboushi, a Harlem resident, who has earned the backing of the likes of the Working Families Party, congressman Jamaal Bowman and the actor and activist Cynthia Nixon, has practiced law for over a decade. She opened her own practice, The Abouchi Law Firm, where she works alongside the other lawyers in her family. While she lacks prosecutorial experience, she has had several high-profile cases, including one against the New York police department. During the case, which she won, she defended Muslim women who were made to remove their hijabs to get their mugshots taken during arrests. Subsequently, each of the three women received a $60 000 settlement and everyone now has permanent protection to wear a hijab during post-arrest processing. The first-time Manhattan DA candidate with an unfaltering drive also garnered international attention when she co-lead the legal team that showed up at John F Kennedy International Airport after ex-President Trump issued the so-called Muslim ban. In addition, Abouchi won a case for four Black firefighters, forcing the New York City Fire Department to allow those with medical conditions that make shaving painful and potentially scarring to keep their beards.

How A Personal Family Struggle Became Abouchi’s Motivation To Find Justice For All
The first time Abouchi stepped into a courtroom, her parents, who ran a small grocery store in Sunset Park, Brooklyn, were on trial. The immigrants from Palestine were arrested on charges that included the sale of untaxed cigarettes and stolen goods. While her mother was acquitted, her father would go on to serve 20 years in federal prison. This left Aboushi, who was 14 at the time of the trial, and her nine siblings facing an uncertain future with their mother.

After hearing the prosecutor’s indifferent response of, “They’re not my problem,” when asked by the judge about what would happen to Aboushi and her siblings, she knew she needed to make a difference. Over two decades later, she is doing so armed with a bachelor’s degree in Legal Studies and Economics from St John’s University and a Juris Doctor, a professional doctorate degree, from Syracuse University College of Law.