Who hasn’t fallen under the spell of the Lebanese illustrator’s beautiful and surreal work? 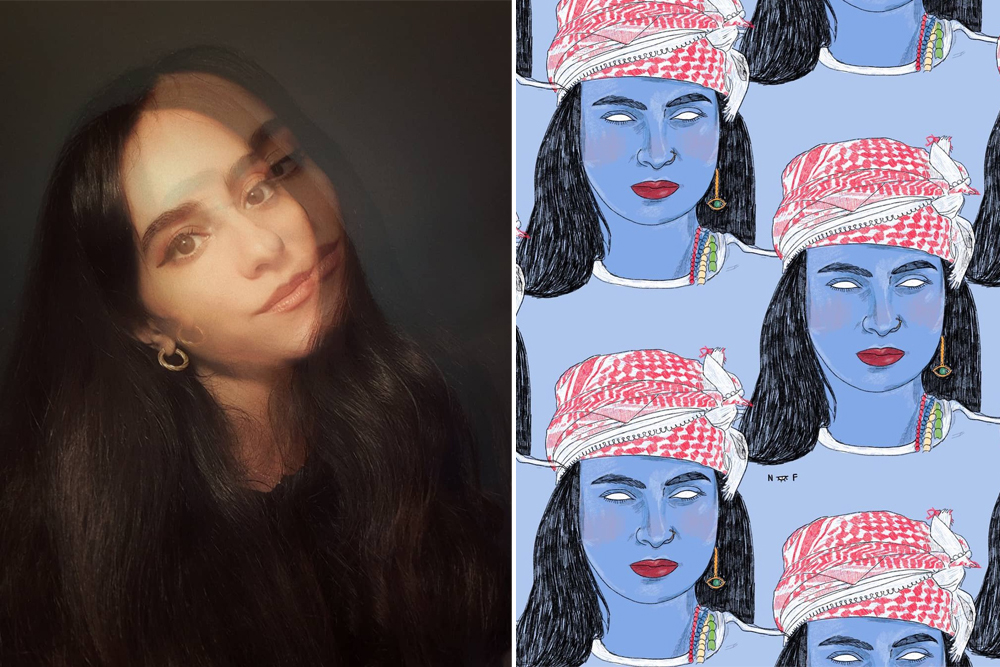 To celebrate International Women’s Day 2021, Nourie Flayhan has designed a range of items to pay tribute to the women who have played a key role in the revolutions and protests across the Arab region. The Lebanese illustrator, storyteller and influencer has collaborated with the Native Threads Collective for the limited edition embroidered collection called “Women Revolution.” As well as honouring the many women of all ages, classes and religions who participated in the protests, from Morocco in the West to Iraq in the East, customers will be helping to create a safe space for women as all proceeds will go to Lebanese NGO Haven For Artists.

Coming in a range of colours and embroidered with the slogan, “The women's voice is a revolution,” the collection can be readily shipped to different spots around the globe. The nine items include a hoodie, T-shirt, sweater, sticker, tote bag, long sleeved top, baseball cap, iPhone cover and mug.

The artist known for her social-minded colourful, idiosyncratic sketches of people, often featuring multiple hands or eyes, and the collective behind apparel and clothing that “celebrates stories of Eastern heritage through cultural content and contemporary streetwear” certainly make a great team. And while announcing the collection on her Instagram page, Flayhan explained a bit about the organisation they have chosen to back.

Here to Listen, held between May 4 and 13, is a series of virtual talks enables us to find tools that will help us stay connected and overcome the struggles of now.https://t.co/4n5k84jxtw

“Haven for Artists is a feminist, women led all inclusive arts organisation (NGO) that has opened cultural and safe spaces for artists, activists and advocates for freedom of expression and equality, while focusing on women’s and LGBTQI rights,” the US-born creative said about the NGO founded by Dayna Ash and Yasmine Rifaii.

While Flayhan was raised in Kuwait and Lebanon, it wasn’t until she was studying Visual Communication at the University of the Arts London that she felt compelled to revisit her roots. With an upbringing that made it difficult to pinpoint things, she wanted to rediscover her identity. Through her works of art, Flayhan wanted to change the story plots that involved Arabic women and women of colour. She has now become known for signature elements, like young brown-haired women, often surrounded by vegetation and poetic writing.

Flayhan, who describes herself as a “Levantine mountain girl,” made headlines last year when she became the first Middle Eastern artist to collaborate with Gucci. She was one of the 15 creatives tapped to illustrate social media launch campaigns for Gucci Beauty. Flayhan’s three unique artworks for the “Gucci Bloom” and “Acqua di Fiori” perfume launches featured imaginary characters pictured at home and showcased on the Italian house’s Instagram page. She has also collaborated with Emirati jewellery brand MKS Jewellery for their "Here to Listen" series. Part of the MKS Cares initiative, the series of virtual talks focused on the GCC enabled women to find tools that would keep them connected, overcome the struggles of the pandemic and express themselves freely.