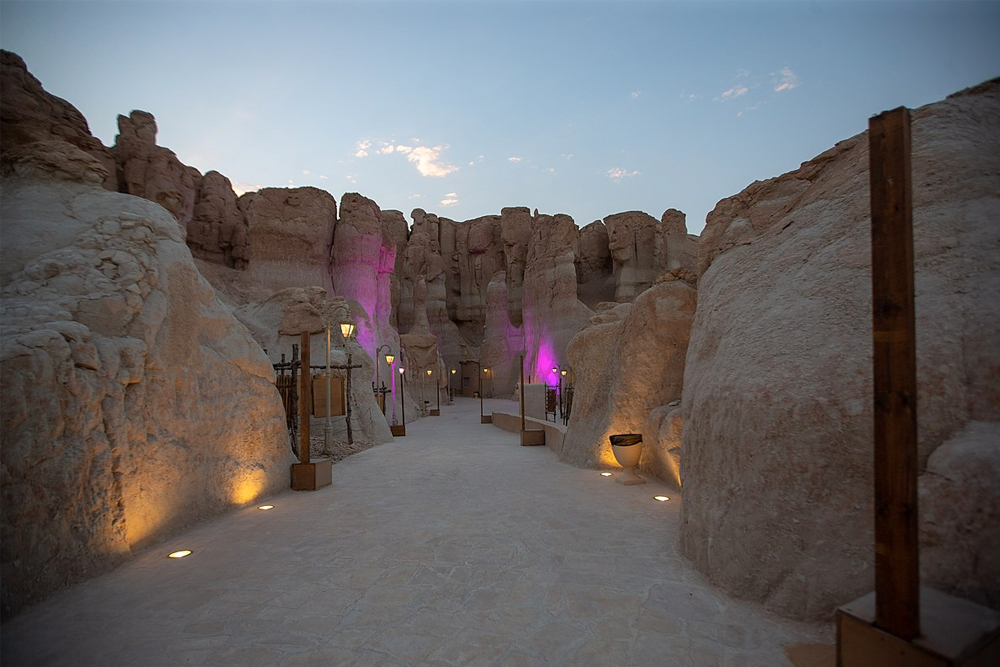 The eastern region of Al-Ahsa in Saudi Arabia is popular amongst locals and visitors alike, and it is not difficult to see why; the region offers it all! From its tourism attractions to natural wonders, heritage sites to favorable climate, it is no wonder that this region is considered a hit among holiday goers and is a pride of Saudi Arabians across the Kingdom. Al-Ahsa is also home to a stunning mountain that rises towards the sky, made of limestone and offering breathtaking views of the land below.

Al Qarah Mountain, named after a nearby village, is this magnificent limestone mountain, standing at about 210 meters above sea level and covering an area of 1,400 hectares. Its unique appearance and network of caves are a result of sub-aerial weathering. At first glance, you may assume that Al Qarah Mountain is just an ordinary mountain, but there is so much more to it than you might expect. As recently as 2018, it was selected as a World Heritage candidate, following the successful inclusion of Al-Ahsa Oasis. But, why is Al Qarah Mountain such a big deal?

That is because Al Qarah Mountain is a natural wonder famous for its caves, which are categorized into three types. The first type is a result of dissolution and erosion, which is a common type of limestone caves found throughout the kingdom. The second type is a result of collapse due to erosion and weather, and the removal of the lower layer. The third type is a result of seismic faults and ventilation factors. Unsurprisingly, the limestones and breeze can lead to favorable temperatures, leaving the caves cool in the summer, and warm in the winter.

Until recent times, it was believed that local inhabitants had been making use of the caves for various reasons, which includes Qur'an classes for children, and wedding venues. Today, some of these caves are maintained by relevant authorities for tourism, with the addition of cafes, shops, and theaters. Climbing up to the summit is a treat to the adventurers amongst us, as it offers stunning vistas of the nearby Al-Ahsa Oasis. For those looking to make the summit, it is recommended by local authorities to partake in this activity only with an experienced guide.

When it comes to history, this mountain offers plenty. Archeologists uncovered evidence of ancient settlements around the area dating back to 5,000 BC, but that's not all. There are a handful of other legends that are popular among tourists. For example, there are tales of the area playing a role during the times of Adam and Prophet Ibrahim. Some also believed that Judas came to what is now known as the "Judas Cave," where he'd commit suicide for betraying Jesus. Following recent renovations, we saw the launch of the "Land of Civilization" museum, which aims to retell the legends around Al Qarah Mountain.

If you are planning to visit Al Qarah Mountain, it is located some 15 kilometers east of Al-Hofuf, at the eastern edge of Shadqam Plateau. The local climate is also said to be moderate all year long, but don't forget to go with sunglasses.