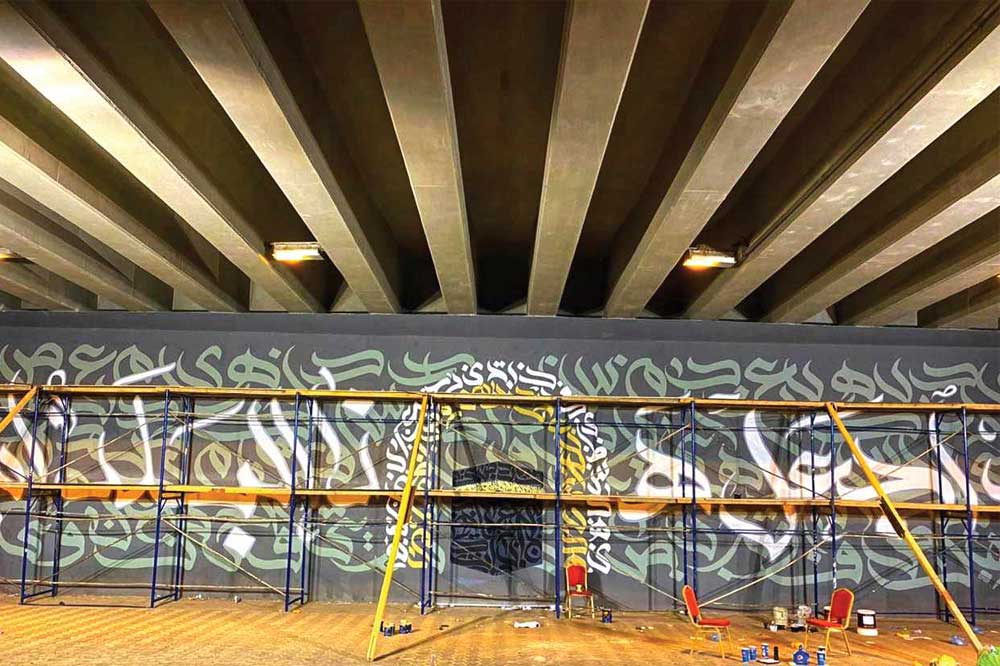 Adding to the beauty of the holy city of Makkah, a community of 15 artists came together to create a 33 meter long mural. In collaboration with Vision Pioneers Group, and Thawan Specialized contracting, the mural lives up the Al Awali Bridge connecting Makkah to Taif Al Hada.

The community of 15 Saudi painters spent over 14 days and 70+ hours working to complete the mural. Using modern Arabic calligraphy, the mural showcases the calligraphic form of Sunbuli, which was created in the early 1900s by Turkish calligrapher, Arif Hikmat. Sunbuli is a derivative of the Diwani style of calligraphy, which was once a script used by the emperors of the Ottoman Empire. This artistic initiative, showcasing Saudi art by Saudi artists, on the walls of the city hopes to add color to public spaces and places.

Basma Al Balawi's piece of art has been a conversation starter since the GCC leaders signed a declaration to unify with Qatar.https://t.co/bThzAUctli

Head of the beautification and humanization management in Makkah municipality, Mousa bin Suleiman Al Sohbi, said that the initiative was the brainchild of Mohammed bin Abdullah Al-Quwaihes, the mayor of Makkah, and the execution of the undersecretary for construction and maintenance, Eng. Zuhair bin Abdulrahman Saqat, and director of gardens and beautification, Eng. Hani bin Hashem Nasiri.

Rayyan bin Wasfi Maqlan, Chairman of Vision Pioneers Group, also mentioned that the voluntary initiative “aimed to artistically improve the urban scene in the holy city with the help of young Saudis.”
He said, “The initiative also aimed to shed light on the talents of the young participants and encourage their sense of social responsibility.” ts, on the walls of the city hopes to add color to public spaces and places.