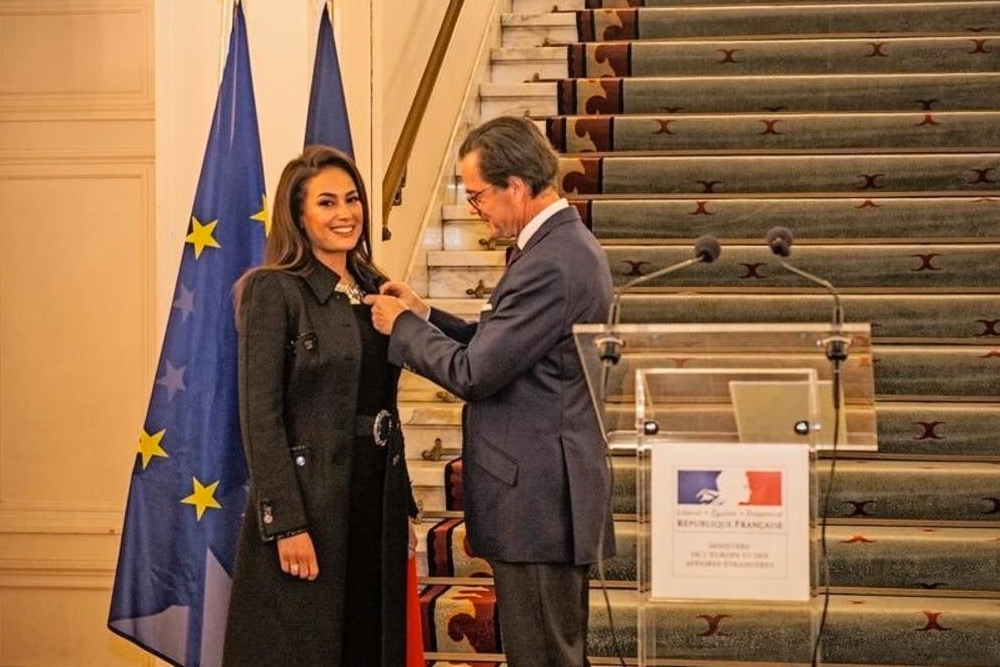 Hend Sabri was recently feted with France’s prestigious Officer of the Order of Arts and Letters honour. France’s ambassador to Egypt, Stéphane Romatet, presented the Tunisian-Egyptian actress with the mark of distinction that is awarded to people who have made significant contributions to the arts and literature scene in France and around the world.

Sabri, who has become a household name since she started her big screen career with the 1994 movie “The Silences of the Palace,” took to Twitter and Facebook to express her joy at being chosen for one of the three Order of Arts and Letters accolades that were created in 1957. “I am proud to receive the French Arts and Literature Order with an Officer’s rank, after receiving it in 2014 with a Knight’s rank. Thank you to the Republic of France and to His Excellency the ambassador of France, to my family, my fans and friends, and I promise you to continue trying to make you happy,” Sabri, who is also a producer and humanitarian, posted on Facebook.

For the special ceremony in Cairo, Sabri, who more recently appeared in films like “Noura’s Dream” and “The Blue Elephant 2,”wore a chic black trouser suit featuring a three-quarter length jacket, bejewelled belt and flared trousers. Fittingly, the dark haired beauty, who is based in Egypt, where her career has thrived, added a standout multi-layered necklace by the local jewellery designer Azza Fahmy.

In her career that spans over two decades, Sabri has proven to be one of the Arab world’s most popular actresses. In a number of the successful films and TV shows under her belt, she has shone a light on the pressures and issues Arab women face, with one of the most famous examples being her role in “Asmaa” (2011). And she recently teamed up with Netflix to appear in a new a new “female-focused” original series. The superstar is not only acting in the project, she is also its Executive Producer, under her company Salam Production.

The 41-year-old celebrated actress, who has had notable roles in films like “The Yacoubian Building,” “A Citizen, An Informant and a Thief” and television series “I Want to Get Married,” has earned several prestigious awards. These include the Best Arabic Actress award at the 2012 Murex D’Or and the Faten Hamama Excellence Award at the 2017 Cairo International Film Festival, amongst others. In 2019, the same year she became the first Arab woman to serve as a jury member at the Venice Film Festival, Sabri won the Best Actress award at the Carthage Film Festival for her role in “Noura's Dream.”

Mohamed Hefzy Also Earns French Honour
During the same event, Egyptian producer and screenwriter Mohamed Hefzy was awarded another grade, Knight of the Order of Arts and Letters (Chevalier des Arts et Lettres). The award-winner has been credited with over 30 feature films in Egypt, the Arab world, the US and the UK, with some of his most notable works including Mohamed Diab's “Clash,” AB Shawky's “Yomeddine” and Ayten Amin's “Souad.” Most recently, he signed a partnership for the production of the Arabic adaptation of “Perfect Strangers,” starring Nadine Labaki and Mona Zaki.

Hefzy, who has a Cairo-based production company called Film Clinic, has strong ties with France as he has co-produced a number of his award-winning titles with French associates. He has been President of the Cairo International Film Festival, one of the most prominent regional film festivals, since 2018.

The two honorees made sure to congratulate each other on social media after the event that was a big coup for Egyptian cinema.