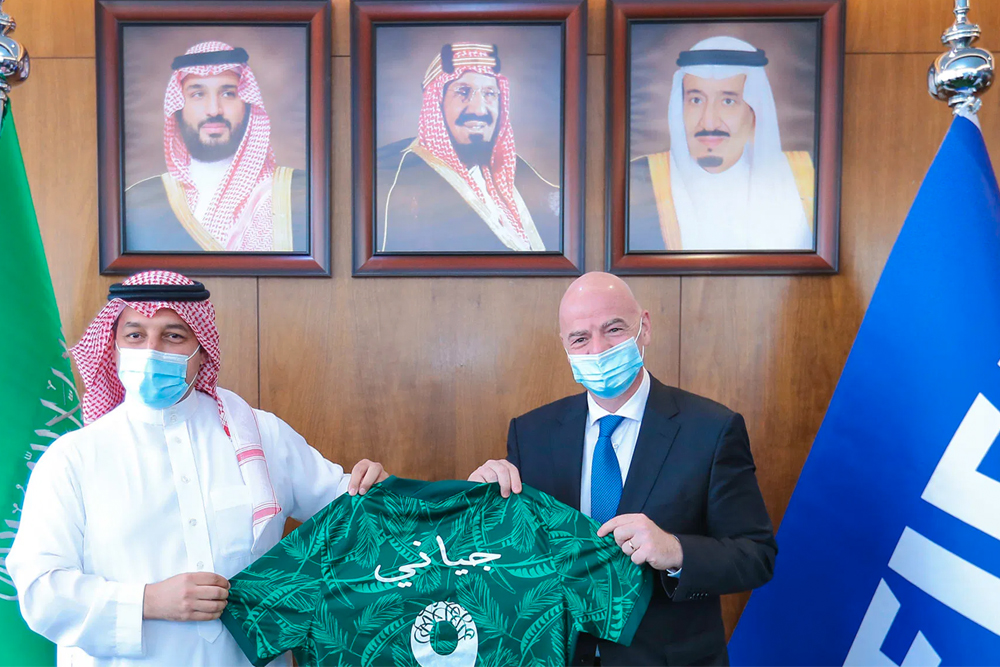 From heavily investing in sports facilities located in schools, universities, and across cities, to supporting sports clubs, initiatives, and projects, Saudi Arabia has been working over the past few years on developing its sports sector, in line with goals set out its Vision 2030 plan and Quality of Life Program. This week, in line with its efforts, the Kingdom received FIFA President Gianni Infantino in the capital city of Riyadh, engaging in discussions around Saudi Arabia’s football and sports leaders, as well as its future plans to expand and develop its sport sectors.

Prince Abdulaziz Bin Turki Al-Faisal, Saudi Arabia’s Minister of Sports and Chairman of the Saudi Arabian Olympic Committee, met with Infantino to discuss key matters regarding the Kingdom’s sports industry, review various events that have been held by the country to date, and discuss not only the current objectives by the Ministry of Sports but the next decade of plans aimed at nurturing sports and increasing sports participation on the community level as well. The discussions included a briefing of the Kingdom’s scholarship program aimed at developing local a new generation of football talents.

According to FIFA’s official website, Infantino’s visit also “featured a tour of the new Mahd Sports Academy, a groundbreaking project launched in 2020 with the aim of identifying and developing local sports talent.” During his time in the Kingdom, he also met with the Saudi Arabian Football Federation (SAFF) leadership and local international referees, he was given a presentation of Saudi Arabia’s regional training centers, reviewed the nation’s domestic women’s football strategy, and toured the SAFF museum.

Gianni, President of #FIFA :
What I experienced here is impressive, the world in its entirety should come to Saudi Arabia to watch it. The big improvement that underwent the past two years are unbelievable.pic.twitter.com/iDPNXuPAuR

“I have been very positively impressed here in Riyadh to see the facilities of the Saudi Arabian Football Federation and I was impressed by the professionalism, by the passion and by the skills,” the FIFA President was quoted as saying in the article. “I knew already that Saudi Arabia is a football country, and has football in its heart, but what I see here is a strategy and a vision, and I need to complement His Royal Highness Prince Abdulaziz (bin Turki Al-Faisal) and Saudi Arabian Football Federation President Yasser (bin Hassan Al-Misehal) and all the team who are doing a great work.