The league’s first season was riveting and we can’t wait for the second one in 2021. Alf Mabrouk! 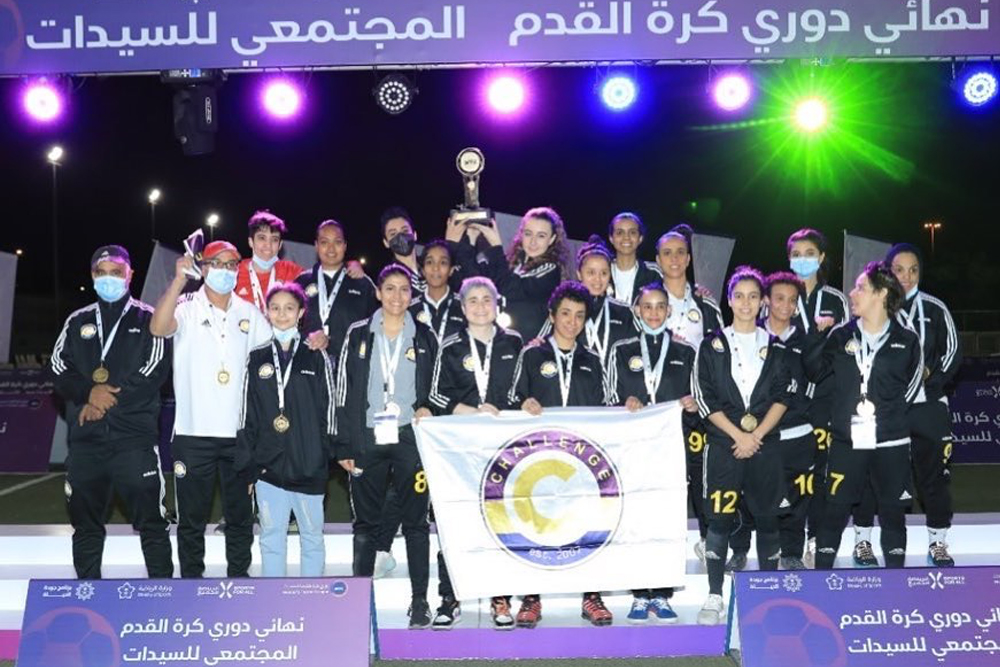 Challenge Riyadh treated us to a historic moment in Saudi sports when they recently took home the Champion’s Cup and an award of SR 150,000. The winners beat rivals Jeddah Eagles in the exciting finale of the community level Women’s Football League (WFL), the first league of its kind in Saudi Arabia. Challenge Riyadh had defeated Eastern Flames in the first semi-final, while the Jeddah Eagles made it to the final match after overpowering The Storm.

As the Saudi Sports for All Federation (SFA) President, Prince Khaled bin Alwaleed bin Talal handed over the cup to the winning team while surrounded by other SFA dignitaries. “This landmark moment in our country’s community-level sports history would not have been possible without the vision and forward trajectory laid out for us by His Majesty King Salman, and HRH the Crown Prince, Mohammed bin Salman,” Prince Khaled said.

“The determination that our WFL players showed was matched only by the coaches, referees and on-group support team. I congratulate you all on living up to the high standard that His Majesty and His Royal Highness have set for us; today you have made Saudi Arabia proud,” he added.

Prince Khaled also awarded the Champion’s Cup second place to the Jeddah Eagles, along with SR 50,000, and the Champion’s Cup best team to The Storm, which earned SR10,000. In addition, standout players like Jeddah Eagles’ Hessa Al Sudairy (Best Goalkeeper) and Top Scorers, Storm’s Dalia Abu Laban, Challenge Riyadh’s Taqwa Alduraidy and Jeddah Eagles’ Farah Jefry, were recognised with prizes of SR 10,000. The ceremony toasted the first and second place teams from each city and the top scorers and best goal keepers from the city qualification round as well. In all, a total of SR 500,000 in prize money was granted.

The WFL, initially launched in February 2020, started gameplay on 17 November, with 24 teams from Riyadh, Jeddah and Dammam joining in a city qualification round before the semifinals and final. After a total of 21 matches in each city, the Champion’s Cup included the finalists from each city along with the best second-place team. The participants, aged between 17 and 30, played a total of 50 matches between November 17 and December 17.

A team of international and local coaches was assigned to the four newly formed teams. Plus, twelve of Asia’s top female referees were in charge of refereeing all the WFL matches, while training was provided for a further 40 Saudi junior female referees.

The SFA developed the league as part of its scheme to encourage female sports participation and help extend and augment infrastructure for women in sports. As well as being under the careful supervision of the Ministry of Sports, it is supported by the Quality of Life programme.