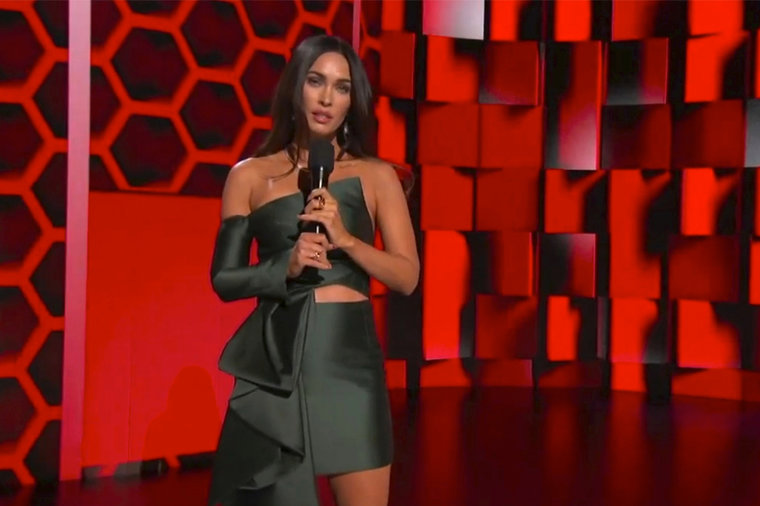 The 2020 edition of the American Music Awards, one of one of the music industry’s biggest and most exciting nights, may have been a bit quieter, but the organisers ensured we still got a jaw-dropping evening. With mega performances and uber chic outfits, whether on stage or on the (socially distanced) red carpet taking over Los Angeles’s Microsoft Theater on Sunday, it wasn’t a night that could be easily forgotten.

The 48th annual AMAs saw some of the music stars proving exactly why they’re considered some of the biggest artists, including Katy Perry. She delivered her first performance since giving birth, a moving rendition of “Only Love” alongside country superstar Darius Rucker. Meanwhile, other noteworthy duets came from Justin Bieber and Shawn Mendes, who belted out “Monster,” and Jennifer Lopez and Maluma.

And the music industry A-listers had one of the last opportunities to flex their fashion sense in 2020. With so much glitz and glamour, the presenters, nominees and performers were obviously out to impress during the world's largest fan-voted awards show, which has a history of bold ensembles. Running the gamut, the looks effortlessly blended Hollywood glamour with fun and unconventionality.

Giving us the best inspo for next month’s festivities, some of the most stylish stars made sure to make a splash in classic colours for the holiday season. Megan Fox, who made her red carpet debut with Machine Gun Kelly, donned an emerald green mini dress by Lebanese label Azzi and Osta. The gorgeous outfit featured cutouts, an asymmetrical neckline, one single sleeve and a ruffled detail that draped from the waist. Plus, Chiara went all out in a head-turning cherry red gown with hints of black. The star's vivid gown, designed by Balmain, showcased a black collared detail that went all the way down to the full skirt, which also included a striking train and sky-high slit.

The Big Trend: Audacious Metallic Silver
During the star-studded evening, a number of celebrities proved there’s nothing quite like a glitzy look with the glitter of melted silver. And it was host Taraji P. Henson who led the way when it came to stunning metallic moments. Her luxe, sequinned Armani Privé mini dress featured fringe detail on the beautifully embellished long sleeves and collar. She perfectly topped off the look with a matching regal beaded turban. Another star who brought the fashion drama in a bold silver metallic look was Jennifer Lopez. The 51-year-old multi-hyphenate arrived in a sparkly Balmain two-piece with the brand's signature standout shoulders on a cropped and draped long-sleeved top with a revealing neckline and a skirt featuring a super high side split. Paris Hilton was spotted in shimmering silver, the unofficial theme of the night, too. Her disco ball-like mini dress, created by Valdrin Sahiti, also featured a plunging neckline, statement shoulders and long sleeves, which had sheer detail at the edges.

After getting the metallic memo, Cara Delevingne turned up rocking a glittering sleek pant suit by Dolce & Gabbana. The model, actor and presenter opted to style it with a clever take of the shirtless trend, a nude bodysuit with corset detailing. Additionally, Bébé Rexha offered another daring diamond-studded ensemble. The singer, who teamed up with Doja Cat to perform their hit “Baby, I'm Jealous” looked ravishing in the look with a daring cutout, asymmetrical neckline and sexy slit. Click through to check out all the best looks.. 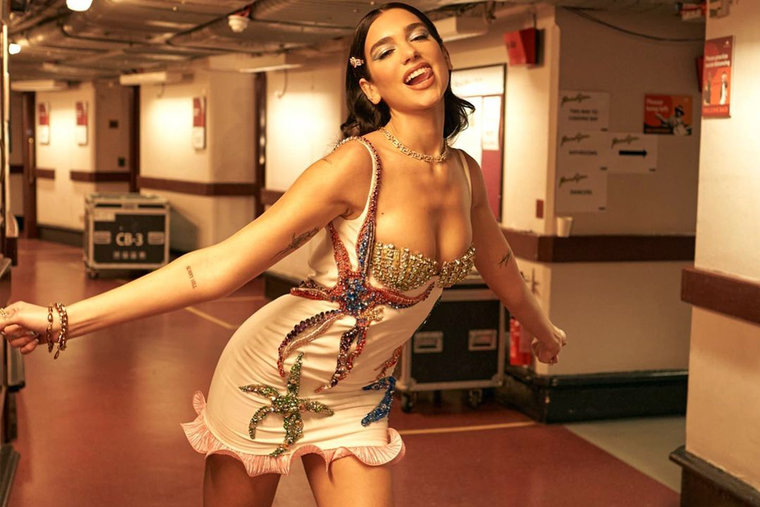 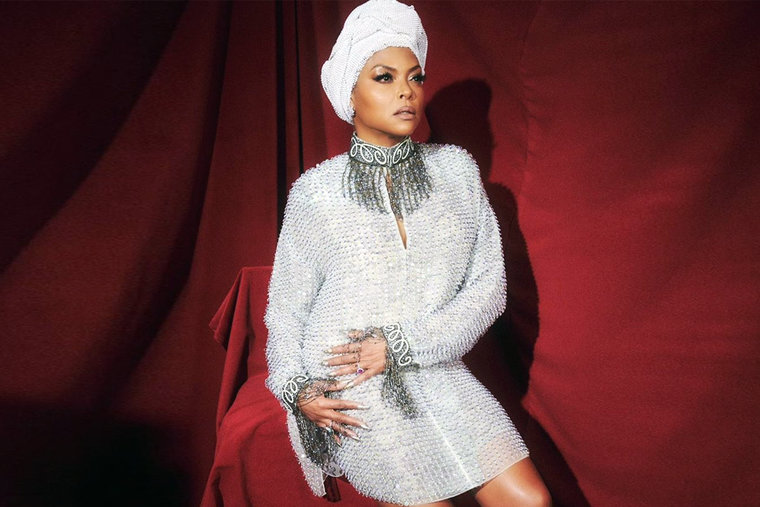 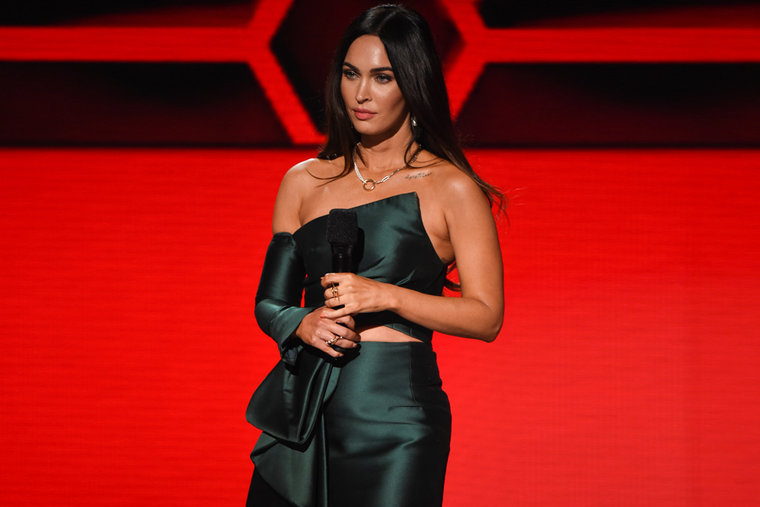 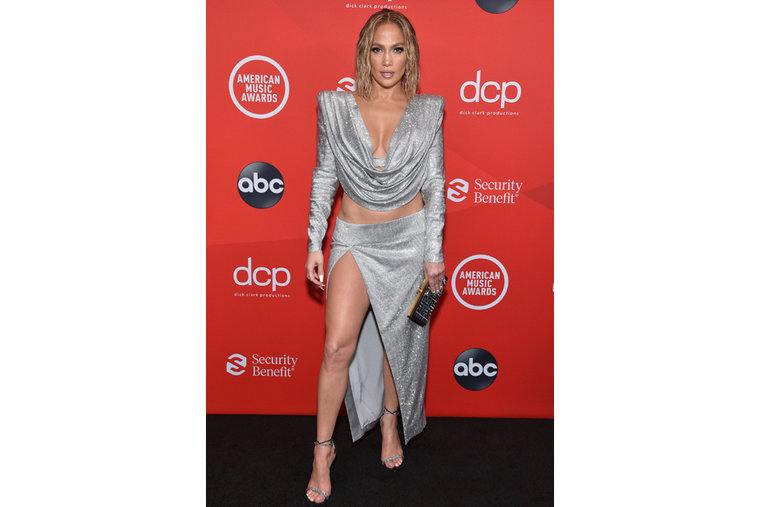 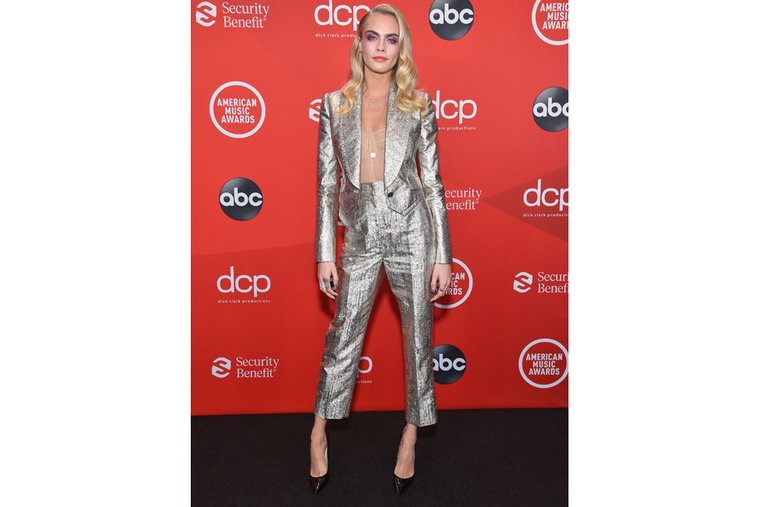 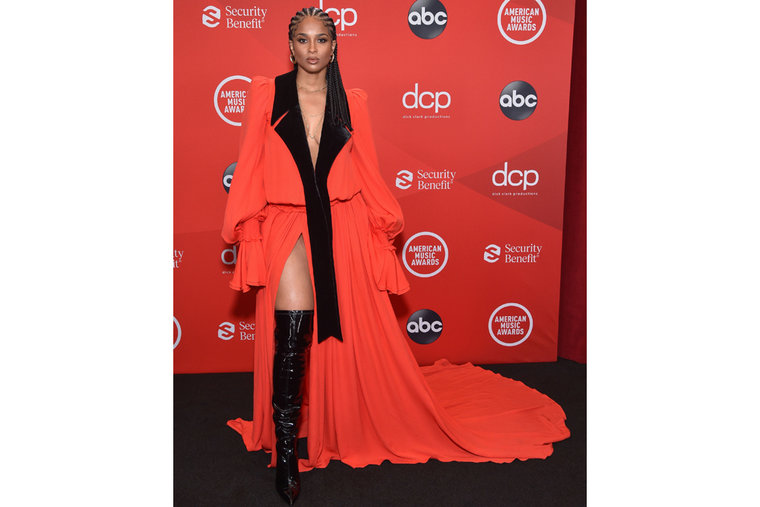 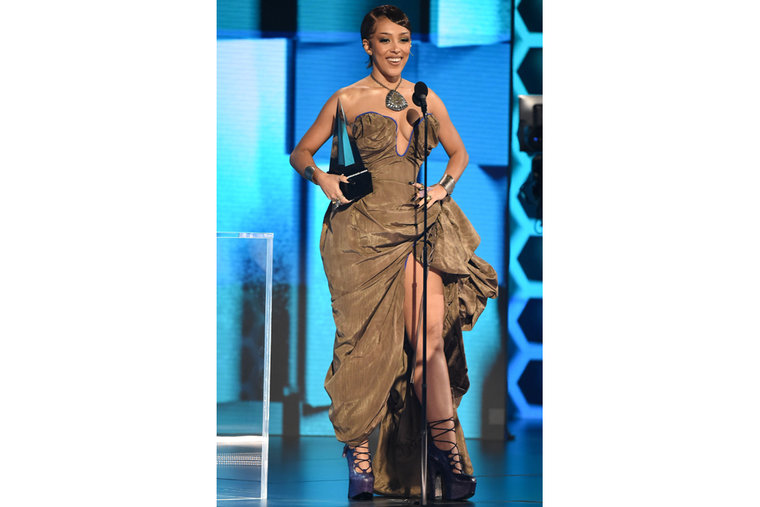 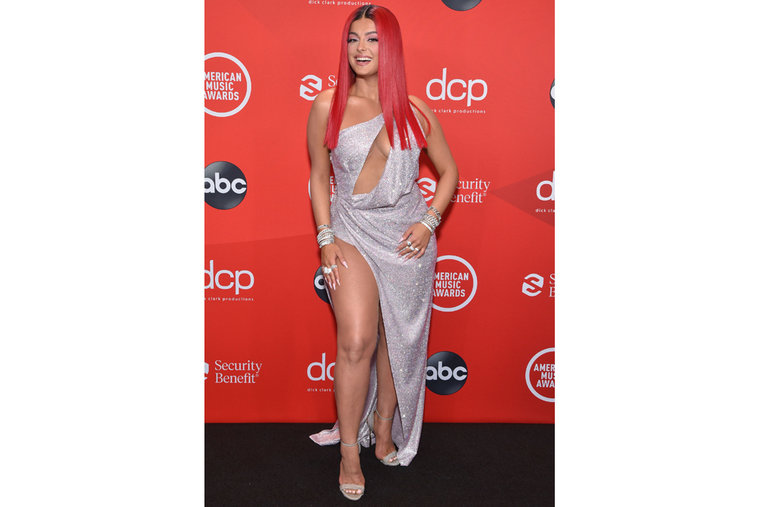 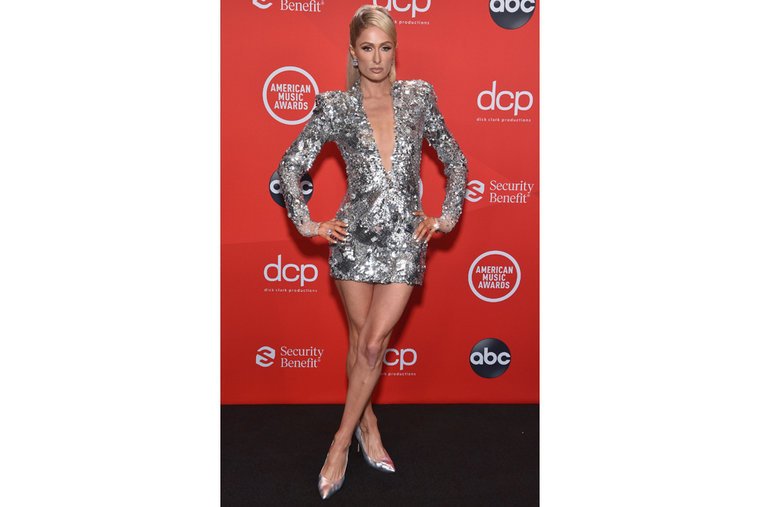 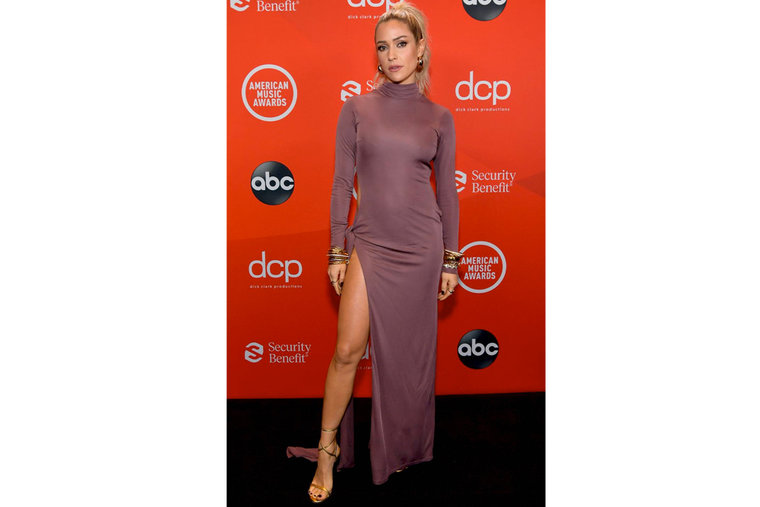 Kristin Cavalari in The Attico 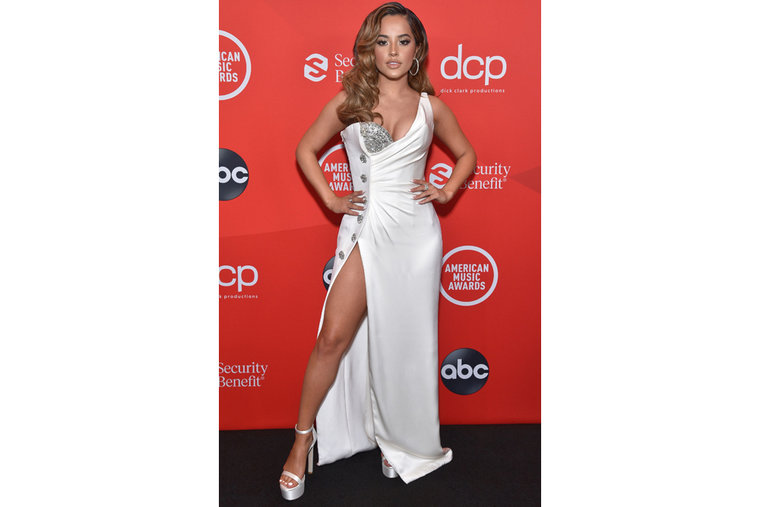 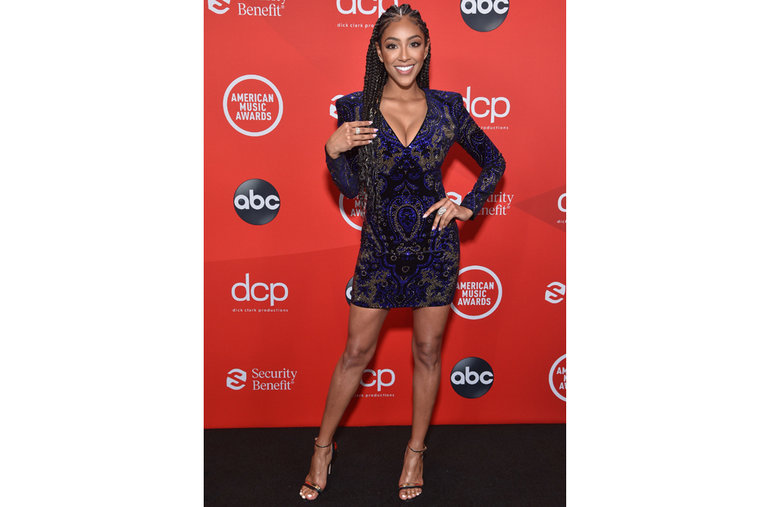 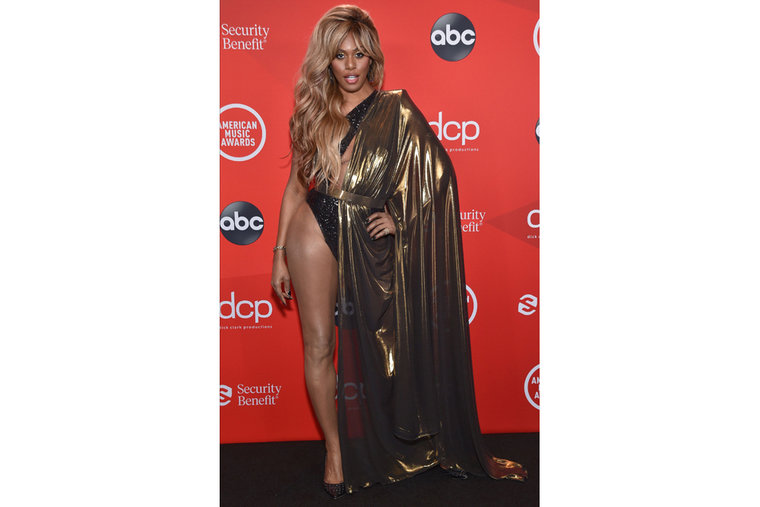 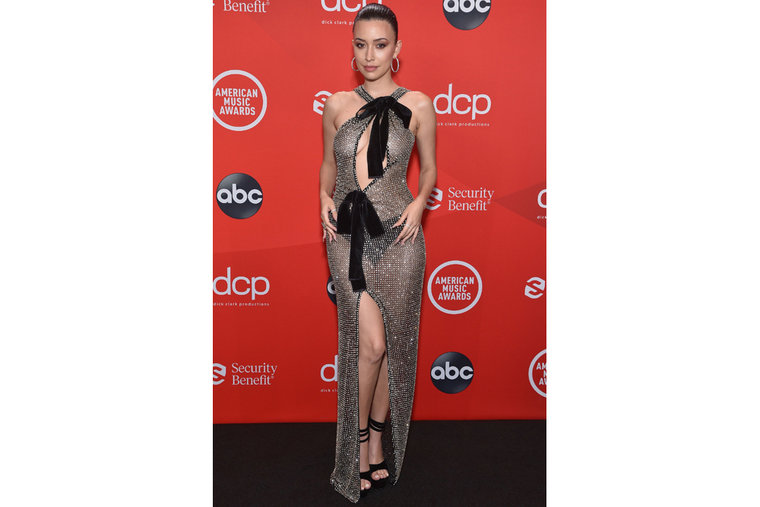