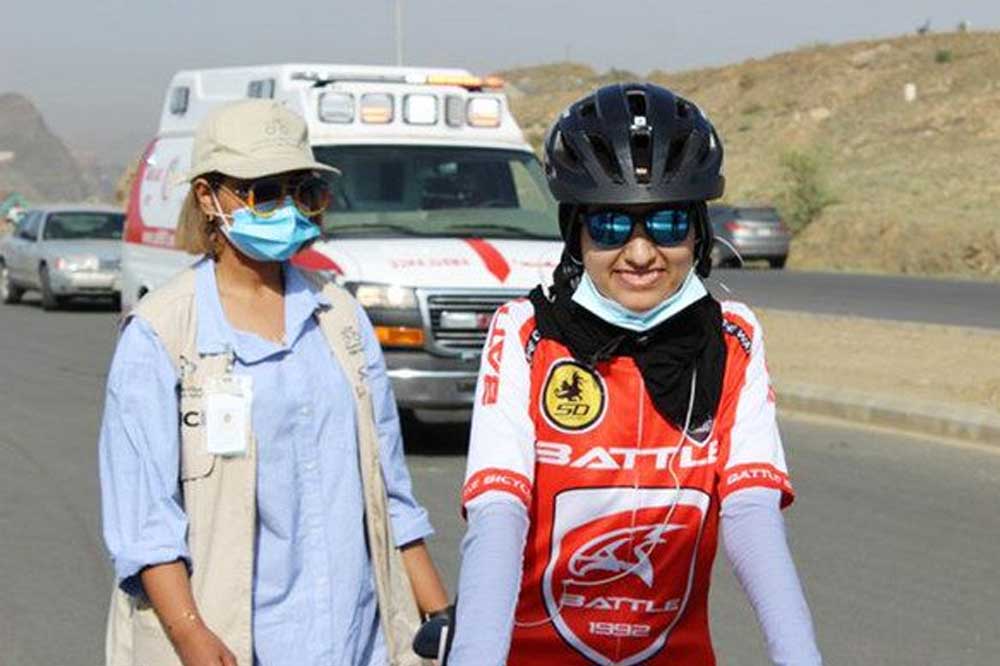 Saudi Arabia launched a world-class cycling competition this week featuring some of the Kingdom’s best female cyclists! Congratulations to Ahlam Nasser Al-Zaid who pedaled her way into the history books and nabbed first place by clocking in at 22:18 minutes in the 13-kilometer race. She was joined by nine other cyclists from across the Kingdom all who made their way to the competition in Abha, in Saudi Arabia’s Asir region.

This first-of-its-kind inaugural event in Saudi Arabia was made possible by the Saudi Cycling Federation and saw Al-Anoud Khamis Al-Majed take second place as she crossed the finish line in 25:39 minutes, Alaa Salem Al-Zahrani in third with a time of 26:57 minutes, and Noura Al-Sheikh in fourth place with a time of 27:04:00 minutes.

Speaking on the momentous occasion and her milestone achievement, Al-Ziad described the moment as “a dream come true,” adding that “[w]inning the title of the Saudi champion was my dream ever since I started cycling […] I am proud to be the first titleholder in the history of this sport in the Kingdom.”

Today, cycling is one of the fastest growing sports in Saudi Arabia and it is particularly popular with women across the country. In fact, in April 2018, Saudi Arabia announced its first-ever 10-kilometer cycling race for women, which took place in the Red Sea city of Jeddah and saw 30 female cyclists compete as part of the “Be Active” initiative, part of Saudi Arabia’s tribute to World Health Day 2018.

#AboutHer: Over the years, Baraah Luhaid launched the first abaya made especially for cycling in KSA and co-founded Spokes Hub to teach and encourage women to take up the sport.

Get to know 4 of the most influential women in the Saudi sports scene here: https://t.co/N9mm8advSk pic.twitter.com/G9y0zdToqs

Then, in 2019, 25 Saudi women from the Jeddah Women Cyclist group continued this culture of women conquering the city’s streets by bike, riding regularly on the newly built cycling track along Jeddah’s stunning Red Sea coastline. Earlier this year in January, the Kingdom witnessed a new all-women cycling race series that was held in Jeddah, Riyadh, and Al-Khobar. The event saw the participation of over 1,000 women, and was organized by the Saudi Sports for All Federation (SFA) and supported by the Saudi Cycling Federation.