Lebanese designer, Eli Mizrahi, just shot an incredible campaign in AlUla in Saudi Arabia with some of the world’s most famous supermodels. 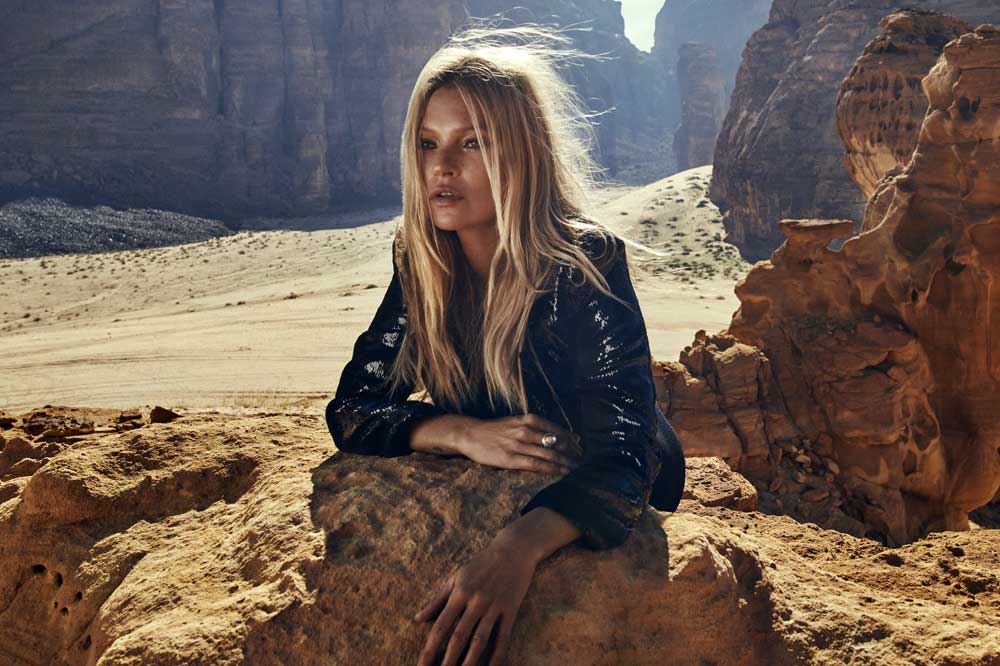 Sporting minimal, black and white, body skimming gowns, the models posed against the magnificent backdrop of Saudi Arabia’s heritage site. Mizrahi told Vogue Arabia of the shoot and his concept, “Looking at the landscape, it is a self-reflection symbolizing what you can do. How do you view yourself? What does white represent? What does black represent?”

Eli Mizrahi grew up in Monaco and became inspired by AlUla when he was invited to the Kingdom last December for the MDL Beast music festival, he told the publication that he immediately decided that Al Ula would be the location for his next shoot – and so it was!

“I didn’t have a million bucks for this campaign. But you never know until you try. I had my little army of supporters; Carine Roitfeld was on board, and I convinced the talent that they would look back on this moment — 24 hours in AlUla — as something special. Kate Moss not only came, but she was the first one on set at 5 A.M and the last to leave.”

Taking to Instagram to share some of the incredible images from the stunning shoot, he captioned an image of Kate Moss thanking all those that helped make his vision a reality as he stated, "bringing to life the first ever Mônot campaign was a collaborative creative effort. So I want to give a shout out to all of the amazing, incredibly talented people who brought my vision to life.”

He continued thanking each model, “Kate the Great, you showed me just what a star you are. You trusted me and jumped blindly into this project. You gave it your heart and soul and you were the keystone to making this campaign a success. Alek, Amber, Candice, Jourdan, Mariacarla, and Xiao Wen you embody the inclusive cross-cultural swath of empowered women that Mônot wants to dress. Thank you for flying in from all over the world to be part of this passion project.”

Mizrahi thanked the photographers and Carine Roitfeld, and then himself, “They say, there is no “I” in team but let me tell you there is an “I” in this!!! So last but not least I want to thank myself for going against the expected,” and concluded, “What I was able to achieve with my first campaign, as the founder of an emerging independent brand, is pretty fanfreaking tastic. And above all, I want to thank myself for not giving up on my dreams. It’s moments like these, when everyone thinks I’m crazy, that I push even harder. I always welcome a challenge. As my father always said, “Follow your dreams and you will never lose sight of your goals”."

The designer who lives between New York and Ibiza launched his label Monot in 2019 in Paris, debuting with a “collection zero.” This year in March, he presented his fall/winter 2020 collection at Paris Fashion Week.