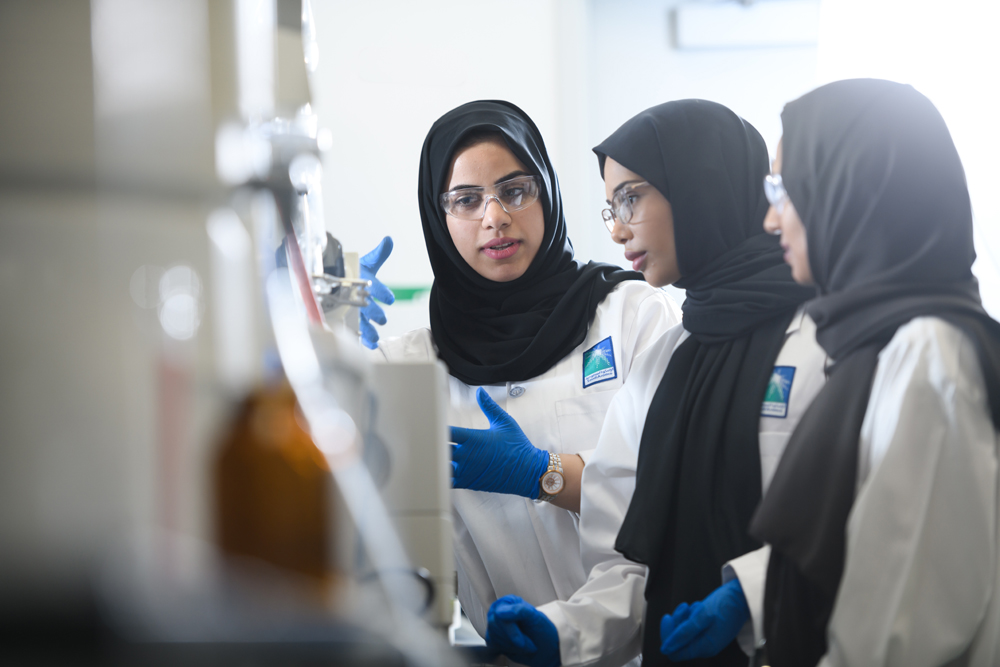 Hawraa Bin Saad, a research scientist at the Saudi Aramco Research and Development Center, has dreams that would probably astound most. She dreams of complicated equations, the ones she finds most challenging. All night, in her dreams, she faces these equations and has a distinct feeling that she can’t wake up until she’s solved them. They are impossible to solve in the misty world of sleep. She says she forces herself to wake up because she is impatient to get back to them in the real world. Back at the lab that next morning, she continues her work.

It’s a story that you would imagine a young Einstein telling, with half-erased, well-worn chalkboards behind him, a tenuous grasp of the here and now but a true visionary.

Hawraa first joined Saudi Aramco in 2012 as a student. “After graduating from high school,” she says, “Aramco gave me the opportunity to widen my horizons in chemistry through their College Degree Program (CDPNE). This unlocked my professional career.”

Hawraa received a BSc in Chemistry from the University of Houston.

Since 2017, Hawraa has worked in many areas, such as corrosion protection, material synthesis, polymer functionalization, nonmetallic materials inspection and properties enhancement. She is currently a member of the R&DC Nonmetallic Applications Development Division and her focus is diversifying the oil economy by identifying disruptive research opportunities for applications, not only within the Oil & Gas Industry, but beyond.

One of her focus research areas is nonmetallic materials. She organized a nonmetallic workshop that gathered experts from over 13 departments across Saudi Aramco to identify the challenges and the limitations hindering nonmetallic pipes. The workshop outcomes were analyzed and prioritized to build a technology roadmap that addresses the major technical challenges of non-metallics available on the market. This technology roadmap is now part of the research portfolio of the new Nonmetallic Innovation Center in Cambridge, UK.

Saudi STEM rockstar Esra M. Alhabshi is paving a future with cleaner energy. When pushed down by others, she doesn't respond: "I keep my focus on myself and hope that one day I can find a breakthrough that will change the industry. I know what I can do.”https://t.co/l3sZ18eJMJ

When Hawraa talks about organic chemistry, her first true love, she discusses the mechanisms and the synthesis of materials, and how to her, they look alive in front of her, as if they are in some kind of battle. She loves how these complex structures require pages to understand and more pages to be defined. She enjoys the quest.

Hawraa, who’s always been oriented to science, is the only female in her family to study abroad and pursue a scientific discipline. However, Hawraa has an unlikely inspiration for her pursuits— her mother, who is not in science at all but a novelist. Her mom’s creativity taught her about inspiration, passion, pursuing your goals, and envisioning your future.

“My mother is a strong woman who has her own perspective,” Hawraa says, “she always goes after her goals and she doesn’t give up.”

She imagines herself ten years from now, in a Saudi Arabia that supports not just those who have scientific leanings, but those who have artistic aspirations and want to make films, books, and music.

“The new ministries of Music and Art are very exciting and I am very glad that the future generations will have opportunities to pursue art. Creative people are everyone in Saudi.”

When asked if she had the chance to do something else, like art, when she was young, if she would have.“No,” she says, without hesitation, “I would always lean towards science and I’m glad I’m doing it. It has its own magic.”

You can’t argue with that. The chemistry masters today are the alchemists of our times. If anyone can change the world, it will be them.