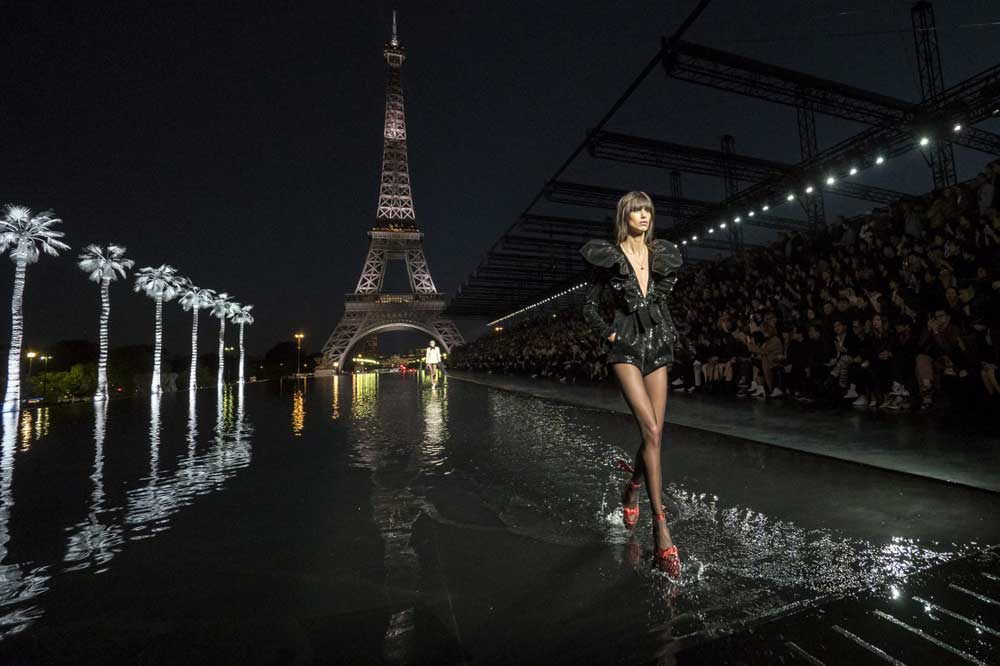 Yves Saint Laurent was founded in 1961 by French Algerian designer, Yves Henri Donat Mathieu-Saint-Laurent, who is regarded as being among the foremost fashion designers in the twentieth century. After his death in 2008, it was Hedi Slimane who led the fashion house up until 2015. In April 2016, Anthony Vaccarello was appointed as the Creative Director.

Saint Laurent was one of Paris Fashion Week’s most anticipated shows, and it seems that this may no longer be the case. The luxury French maison would have two annual shows, spring and fall, and would see the who’s who in fashion in the front rows. Recipients of the exclusive invitations to Saint Laurent’s high glamour shows included the likes of Cindy Crawford, Anna Wintour, Kate Moss and many of their ilk, which would be held at Paris’s Trocadero which sits just across from the glittering Eiffel Tower whilst models like Cara DeLavingne and Kaia Gerber strode the slick runway in the label’s latest and most iconic designs.

However, it seems that this year, the brand will not be hosting it’s shows in Paris for 2020 and beyond as the news broke on April 27th 2020, as Saint Laurent released a statement announcing it’s PFW exit:

“Conscious of the current circumstance and its waves of radical change, Saint Laurent has decided to take control of its pace and reshape its schedule. Now more than ever, the brand will lead its own rhythm, legitimating the value of time and connecting with people globally by getting closer to them in their own space and lives. With this strategy firmly in place, Saint Laurent will not present its collections in any of the pre-set schedules of 2020. Saint Laurent will take ownership of its calendar and launch its collections following a plan conceived with an up-to-date perspective driven by creativity.”

Saint Laurent will celebrate it’s 60th year anniversary in 2021, and we can only hope to see the maison make a comeback to the runways at Paris Fashion Week.