Dorsaf Ganoiati is a force to be reckoned with. The Tunisian athlete broke the mould by becoming the first female to ever referee a second division match in Africa and Asia. She led a team of three lineswomen, Housa Afine, Amal Hached and Emna Ajbouni, who assisted her in running the “Stade Tunisien against Union Monastir” match in May.

Ganoiati is not new to the football field. She had refereed several lower division men’s matches and was a former football player until she became a referee in 2012. When asked about what it’s like being a female referee in a male-dominant sport, Ganoiati said, “Some of the players are initially shocked, but they soon forget about it and focus on their match.”

Not shaken by the stigma, Ganoiati intends to expand her experience as a referee. Her aspirations are not confined by the stereotypes that surround women in football. The 33-year-old hopes to referee top-flight games within the region and internationally.  After completing her studies at the Institute of Sport and Physical Education at Al Said Palace (ISSEPK) in Tunisia, she is equipped with all the necessary skills and qualifications to handle any situation on the field.

There is no doubt that Ganoiati will continue to make history, scoring one goal after the other. 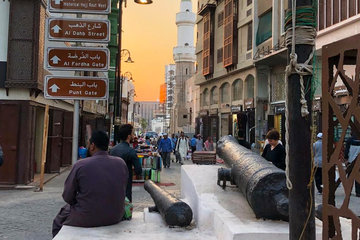