Dr. Ahlam Khondana is a creative force to be reckoned with.

Dr. Ahlam Khondana, assistant professor at Umm Al-Qura University in Saudi Arabia, was awarded the prestigious title of Best Influential Humanitarian of 2019, nominated from a list of top 100 creative personalities in the Arab world. The selection was announced at a conference in Cairo, and was made by Nile Academy for Modern Sciences, Human Development, and Scientific Research, the Coalition for Egypt, and the Overseas Arab Alliance for creatives.

Speaking on the occasion, Dr. Khondana said, “This honor is like a medal on my chest, as it is a result of my efforts over the past years, whether in supporting women or in the scientific and industrial fields.” She then dedicated her award to the Custodian of the Two Holy Mosques, King Salman and Crown Prince Mohammed bin Salman, for their support of the Kingdom’s women, made possible through policy, economical, and social transformations at every level. 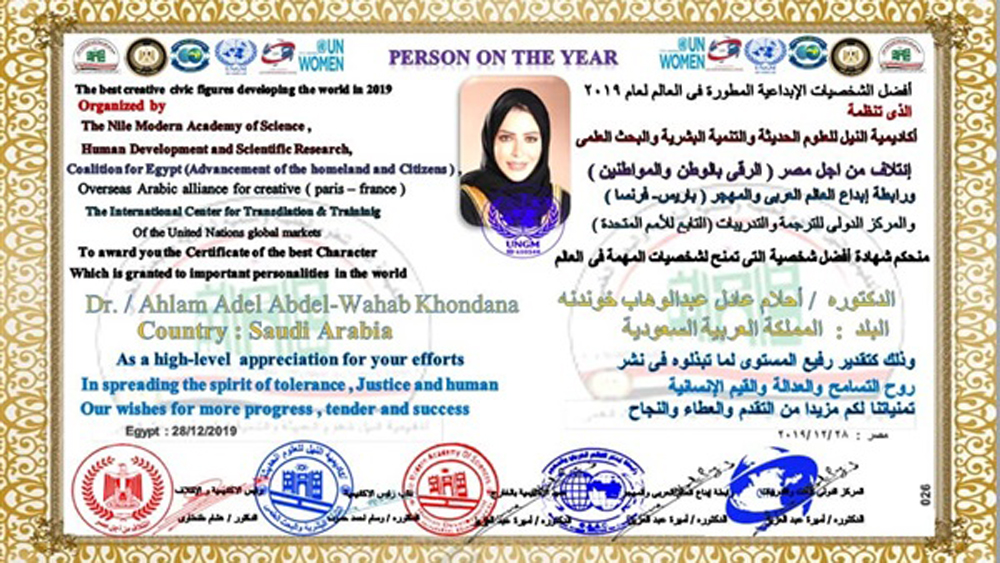 As a founder of a joint organization between Egypt and Saudi Arabia that aims to support female entrepreneurs in the region, Dr. Khondana also took the opportunity to urge her peers across the Arab world to continue working diligently in their respective fields in order to elevate their nations and the region as a whole.

Dr. Ahlam is the coordinating head of Women’s Work in the Council of Saudi Chambers, the head of the Business Women Committee in the Chamber of Commerce and Industry in Mecca, and a member of the council of the Technical College for Girls in Riyadh. Over the course of her impressive career, she has also translated many books in childhood development and has trained many young people over the years in entrepreneurship.