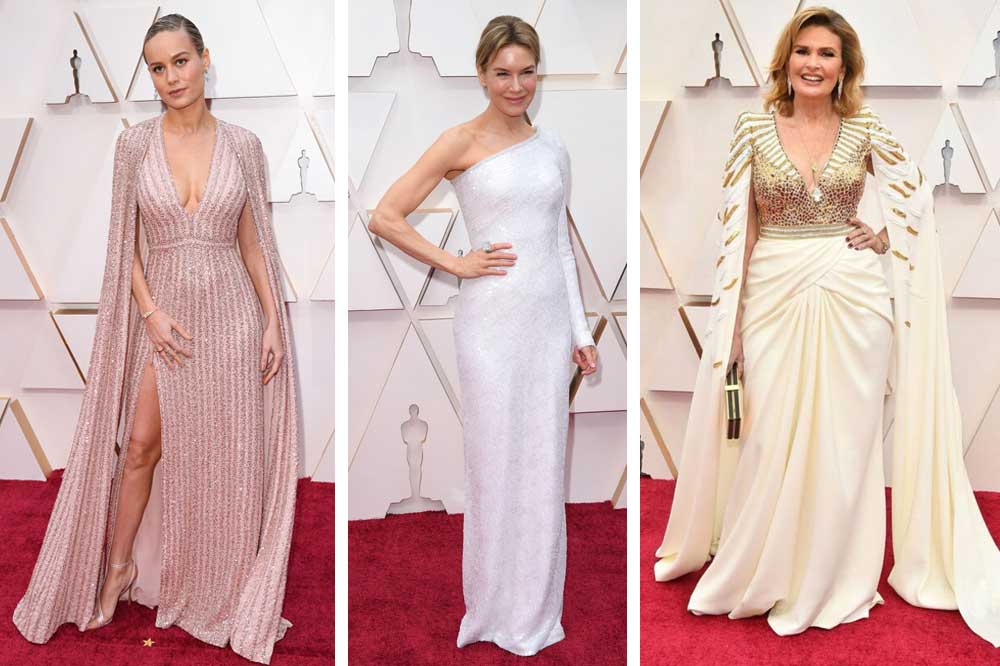 A lot went down at the 2020 Academy Awards, including Parasite shattering 92 years of Oscars history by becoming the first foreign language film to win Best Picture at the Academy Awards. The South Korean hit also won three other awards, including Best Director (Bong Joon Ho). Another highlight was seeing two fine actors finally accepting their first ever Oscar wins, with Joaquin Phoenix making an emotional speech about social injustice and Brad Pitt proving no one can look quite as dapper in a tuxedo as he dedicated his Oscar to his children.

And as Hollywood's awards season drew to a close at the Dolby Theatre in Los Angeles Sunday night, the stars dazzled, with some saving their best outfits for last. While they arrived in style, blush and bright pink hues reigned as one of the major trends. Regina King’s princess-style form-fitting dress by Atelier Versace had a surprising asymmetrical neckline, while Sandra Oh and Julia Butters wore the hue with another big trend to come out of Hollywood’s biggest night, statement sleeves. Spotted cheering for Parasite, Oh, who presented, gave us the pure energy we needed in her epic Elie Saab gown. The dreamy pale pink sequin number was embellished with shoulders made from lots of puffy tulle. Meanwhile, structural shoulders featured on the young "Once Upon a Time in Hollywood" star’s bubblegum pink gown by Christian Siriano.

Brie Larson’s long pink champagne Celine by Hedi Slimane dress was another eye-catching sensation. The elegant, glistening gown, which reportedly took 1,200 hours of hand embroidery, featured a high-leg slit and Swarovski crystals, glass beads, silver sequins and pink stressed jewels coming down in vertical stripes. Fittingly, The Captain Marvel star also walked the red carpet with a superhero-like flowing cape. Opening performer Janelle Monáe was another red carpet supernova. With a nod to sci-fi fashion, she proved you can never wear too much sparkle in a silver cape dress with a hood and open back. According to WWD Executive Editor Booth Moore, the custom Ralph Lauren number features over 168,000 Swarovski crystals and took 600 hours of hand embroidery to complete.

Another cape look, this time with a powerful message, came from Black Swan actress Natalie Portman. She paired a custom Dior gown featuring gold embroidery with a cape adorned with the names of female directors who were snubbed at this year’s ceremony. One more courageous statement came from nominated Waad al-Kateab. The For Sama director wore a gown by Reem Masri with calligraphy by artist Akil, two fellow Syrians. The dress featured the message, “We dared to dream and we will not regret dignity.”

Sustainable fashion also made waves on the red carpet. Best Actress nominee Saoirse Ronan's custom Gucci gown featured a plunging bodice made from black satin left over from the dress she wore to the BAFTA Awards. The lilac and black colour gown featured gorgeous peplum detail. Additionally, Kaitlyn Dever’s custom red strapless Louis Vuitton gown was made of sustainable Tencel and planet-loving Joaquin Phoenix wore the same Stella McCartney tux he has worn to four other award shows. And activist Jane Fonda, who has promised not to buy any more new clothing, turned up in the same sparkling red Elie Saab dress she wore to the Cannes Film Festival in 2014 and ethically sourced Pomellato jewellery.

Click through to check out all the other fabulous looks, including Best Actress winner Renée Zellweger’s custom Armani Privé white one-shoulder column gown and Rebel Wilson’s sparkling gold off-the-shoulder gown designed just for her by Jason Wu. For a pop of colour, check out nominee Florence Pugh rocking a dreamy teal gown with a tiered skirt and belted waist. 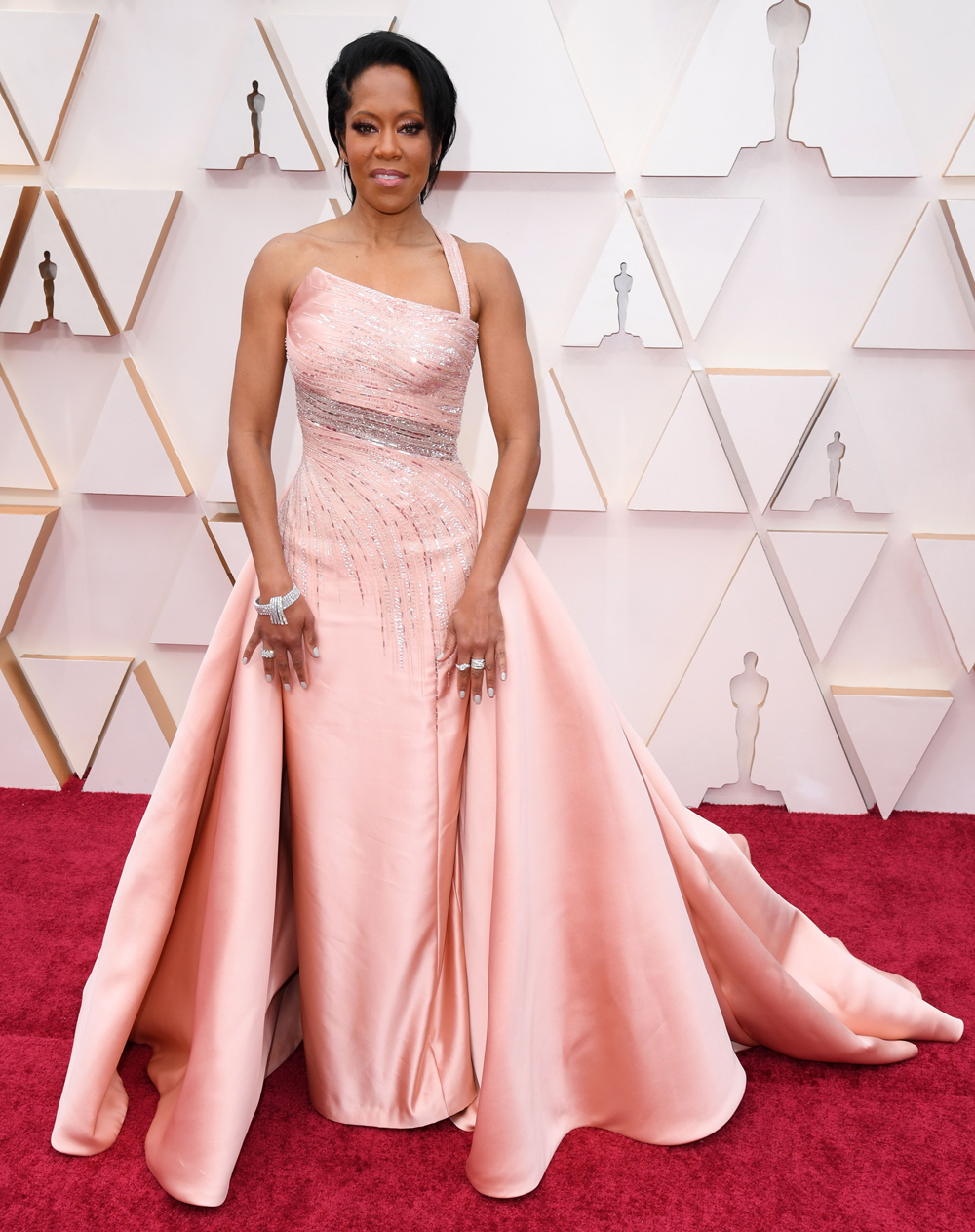 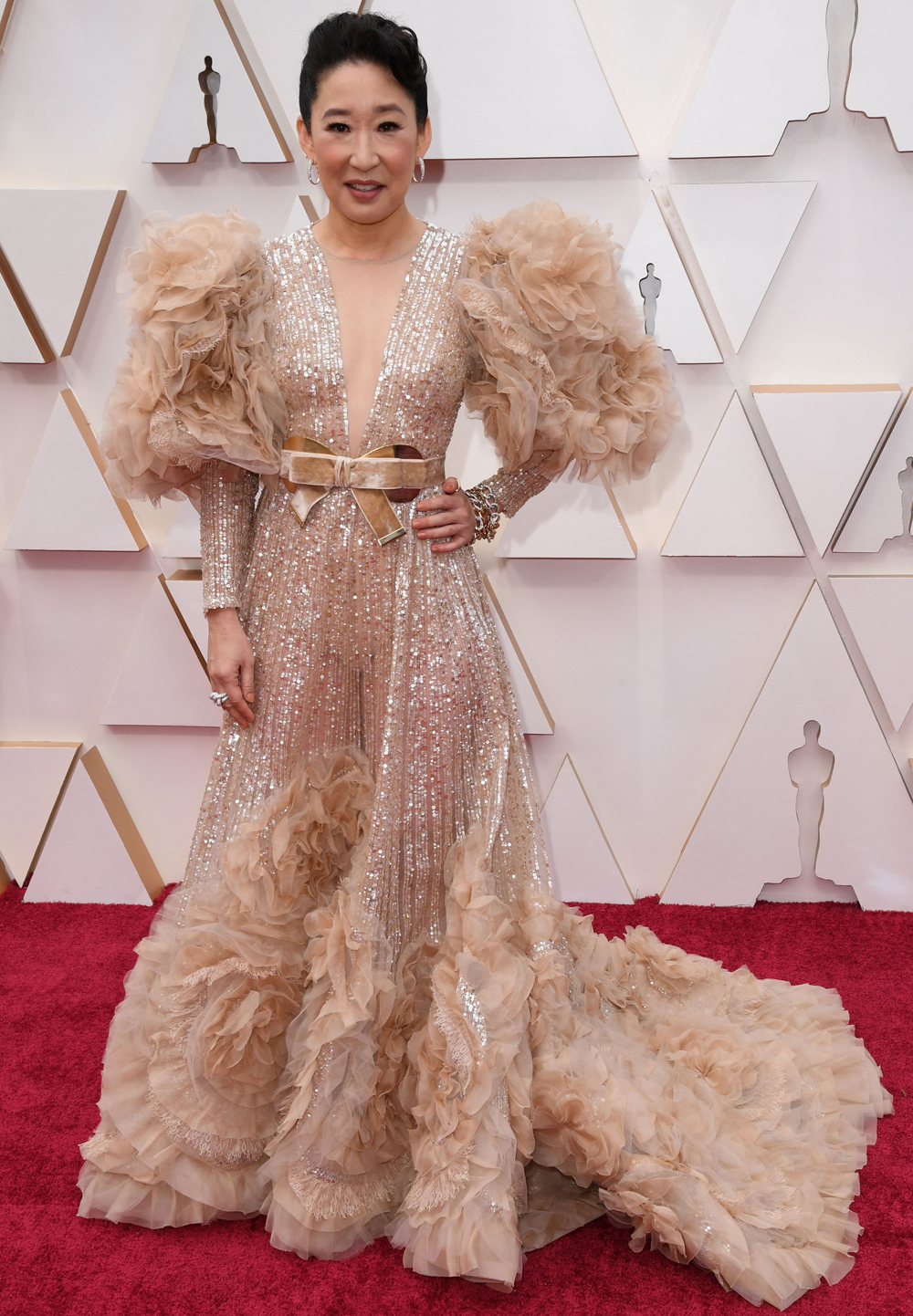 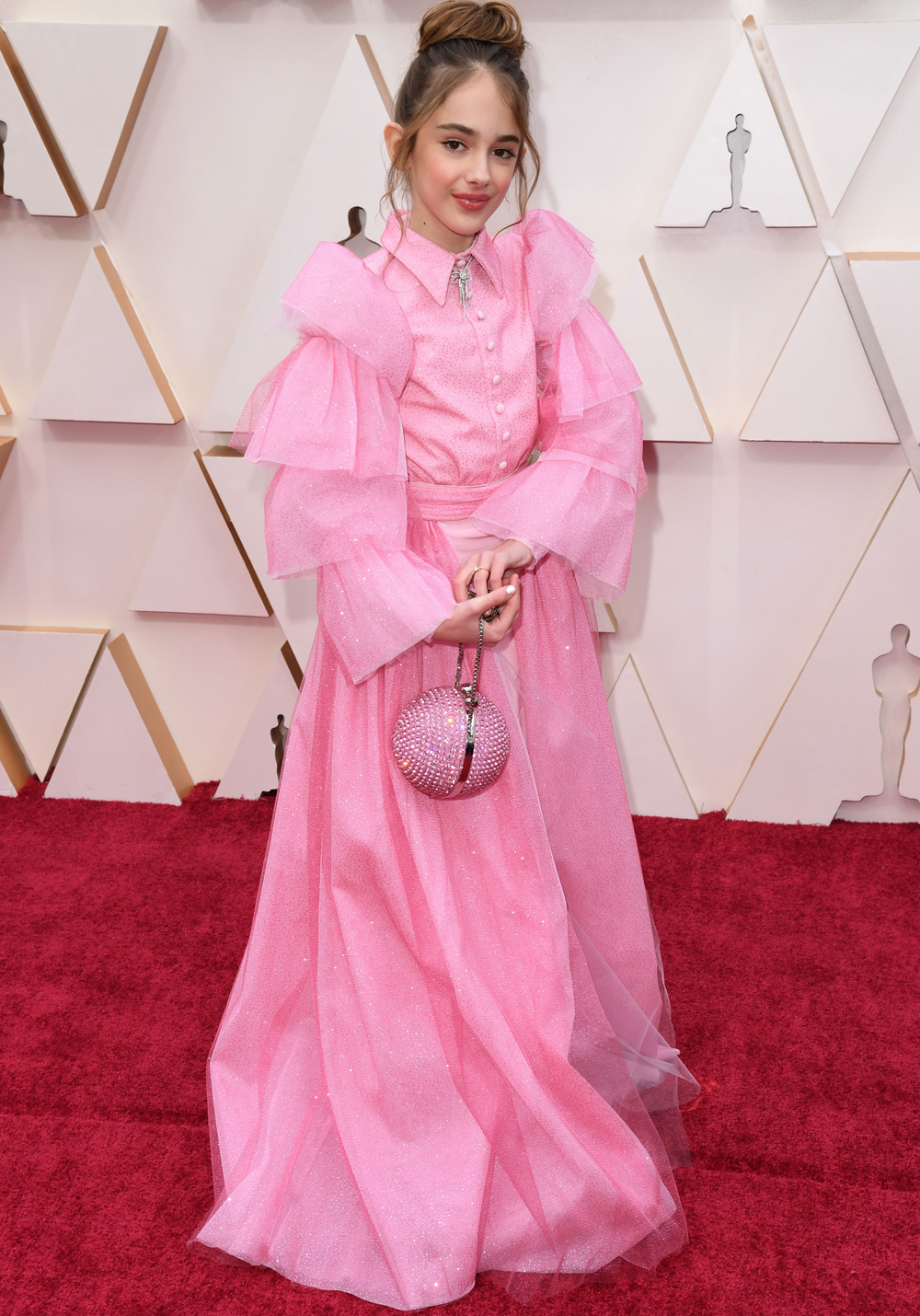 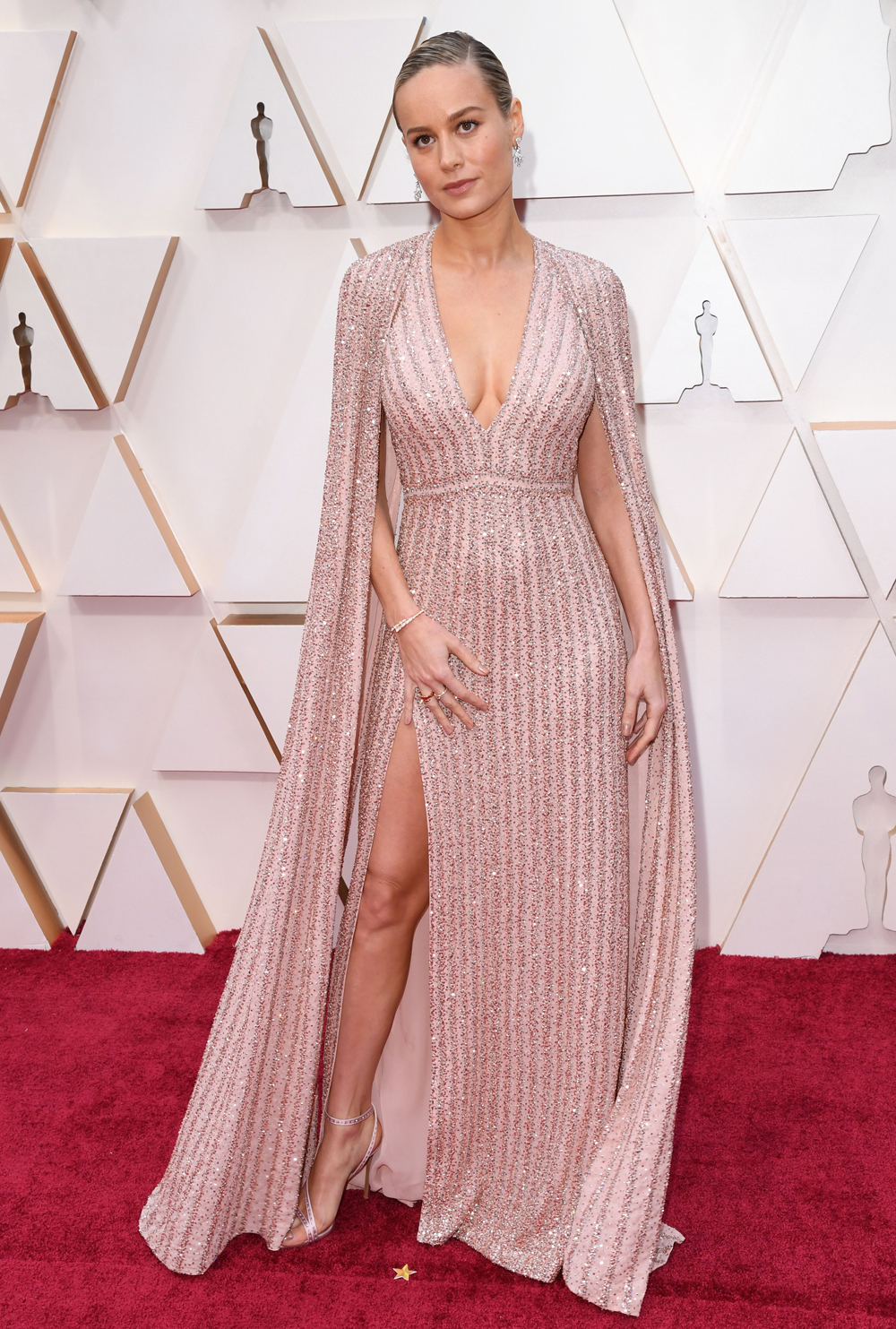 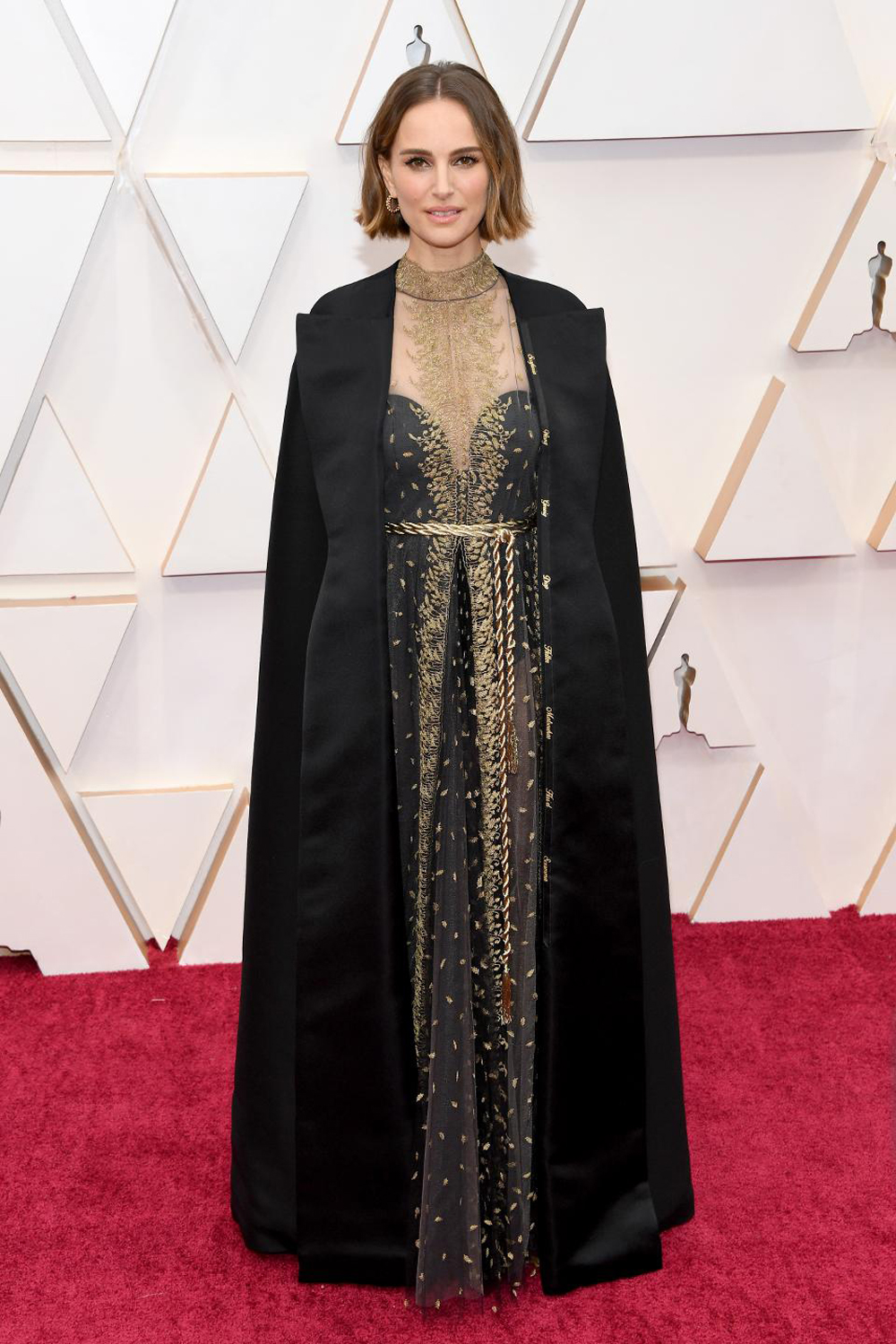 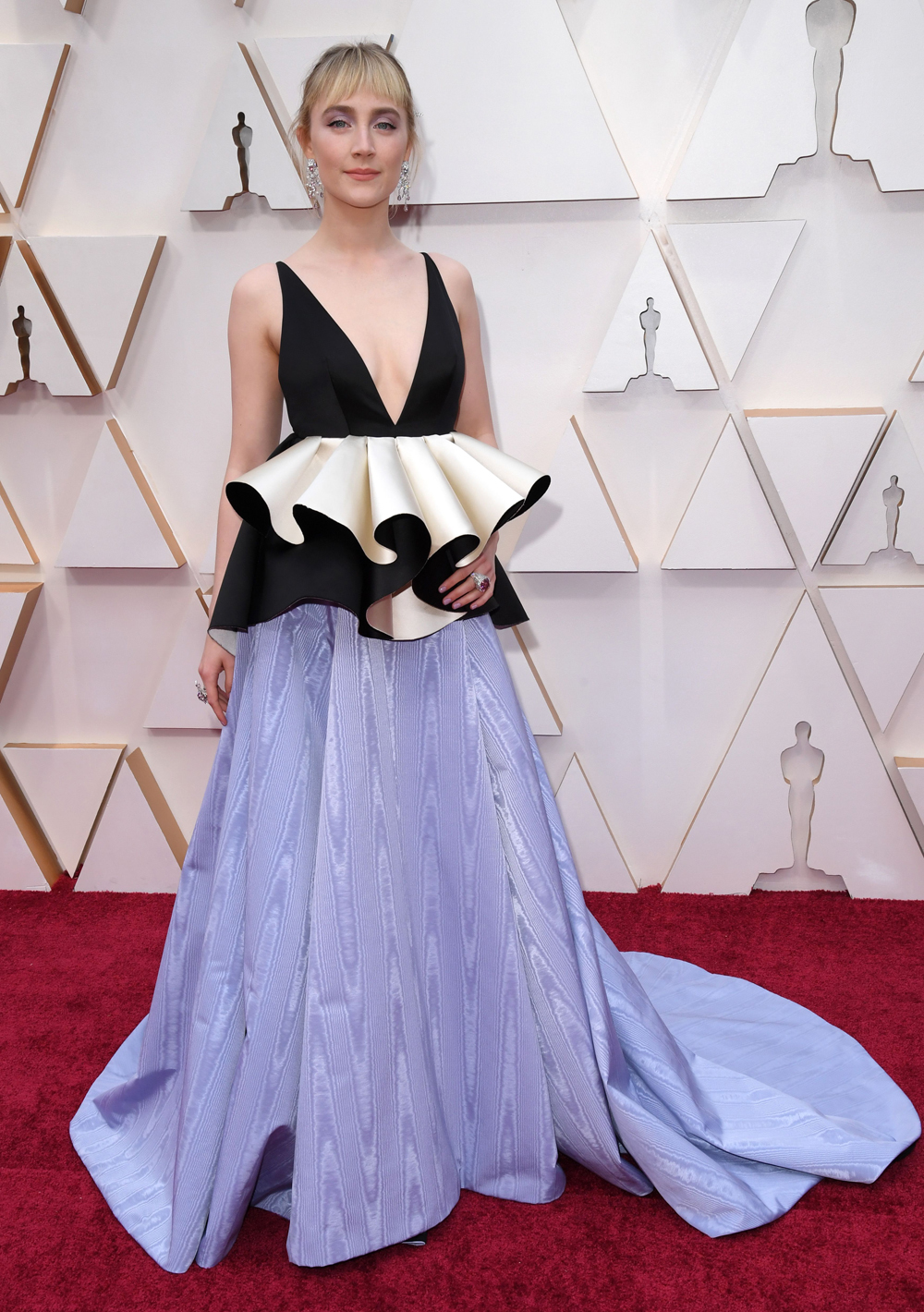 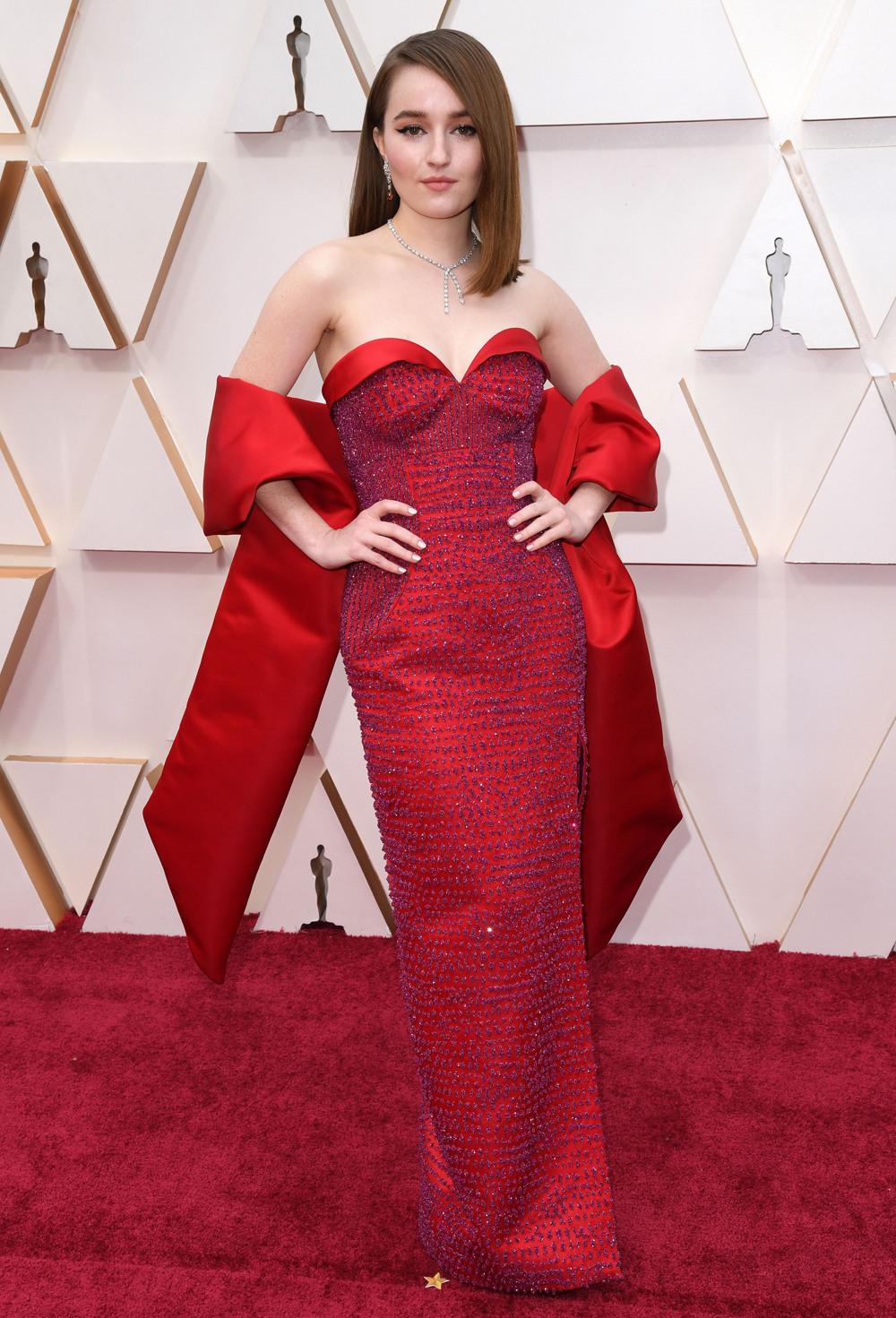 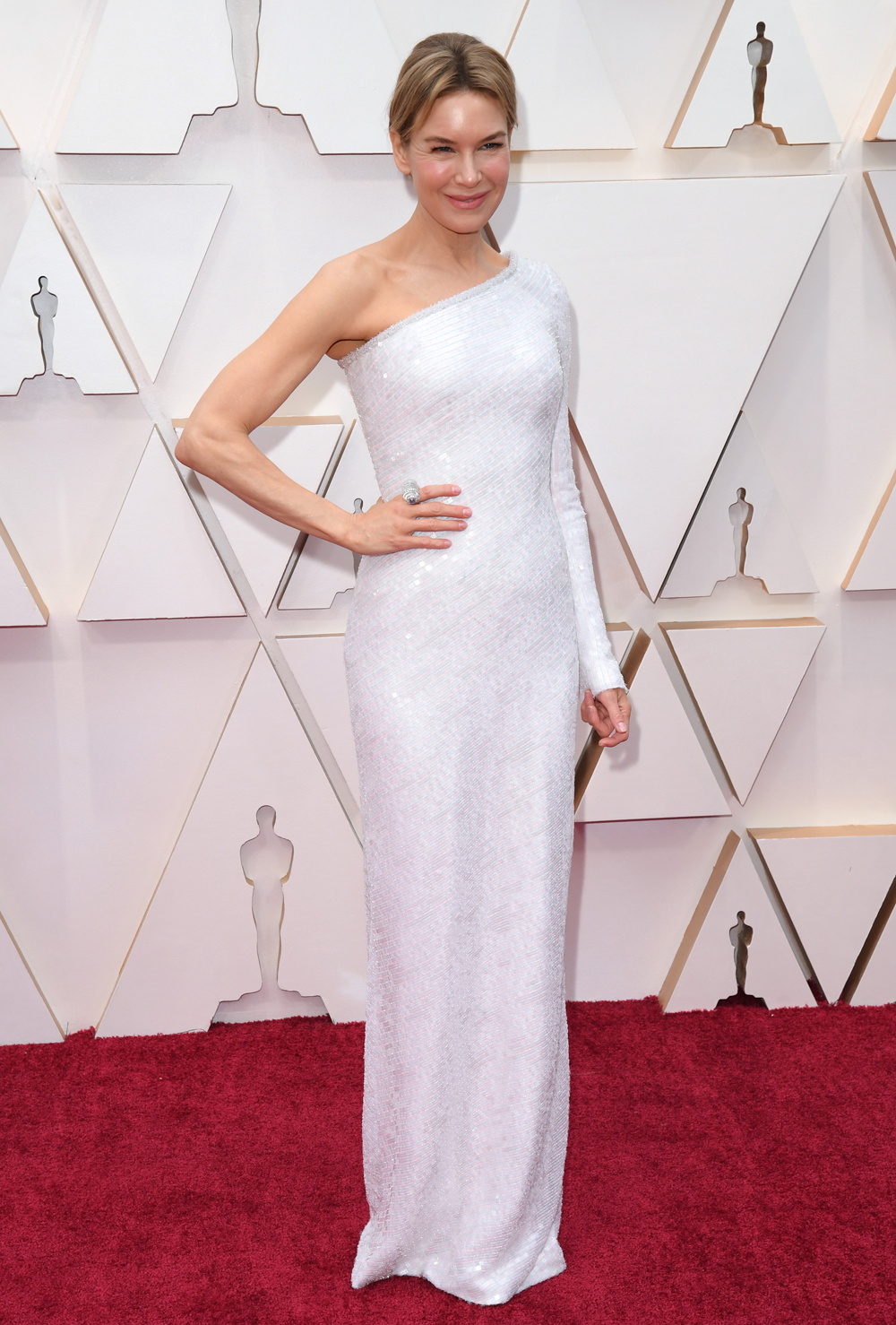 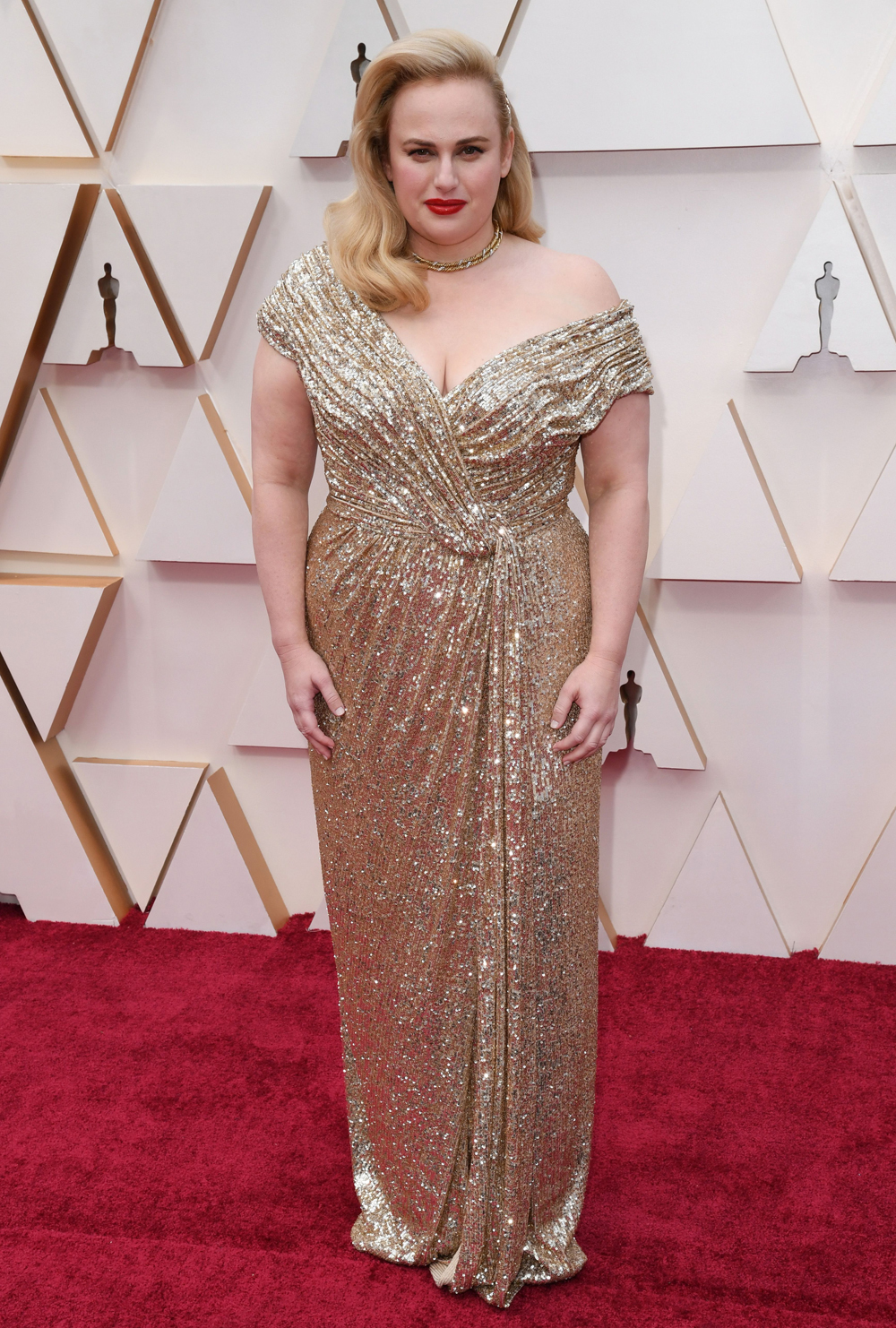 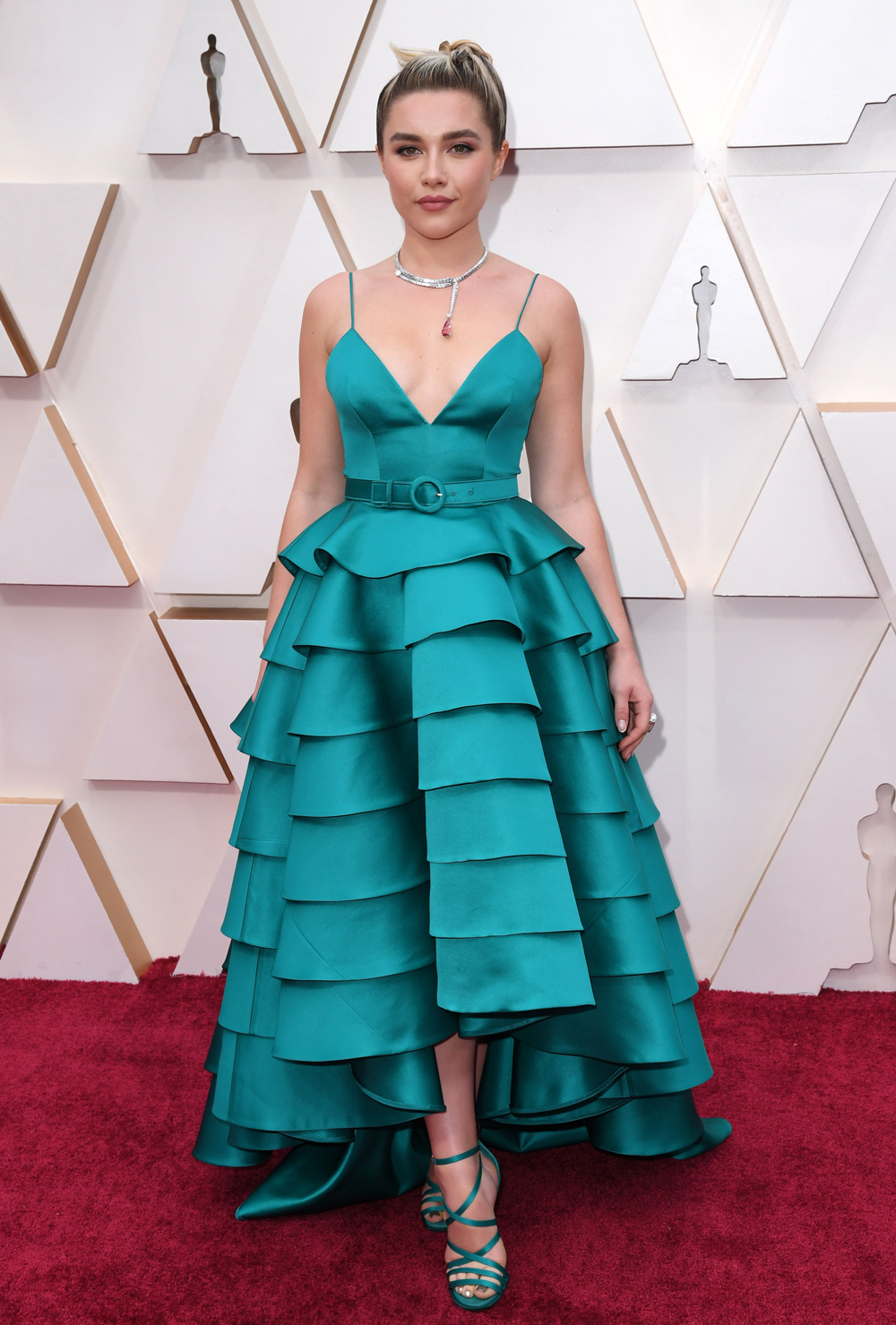 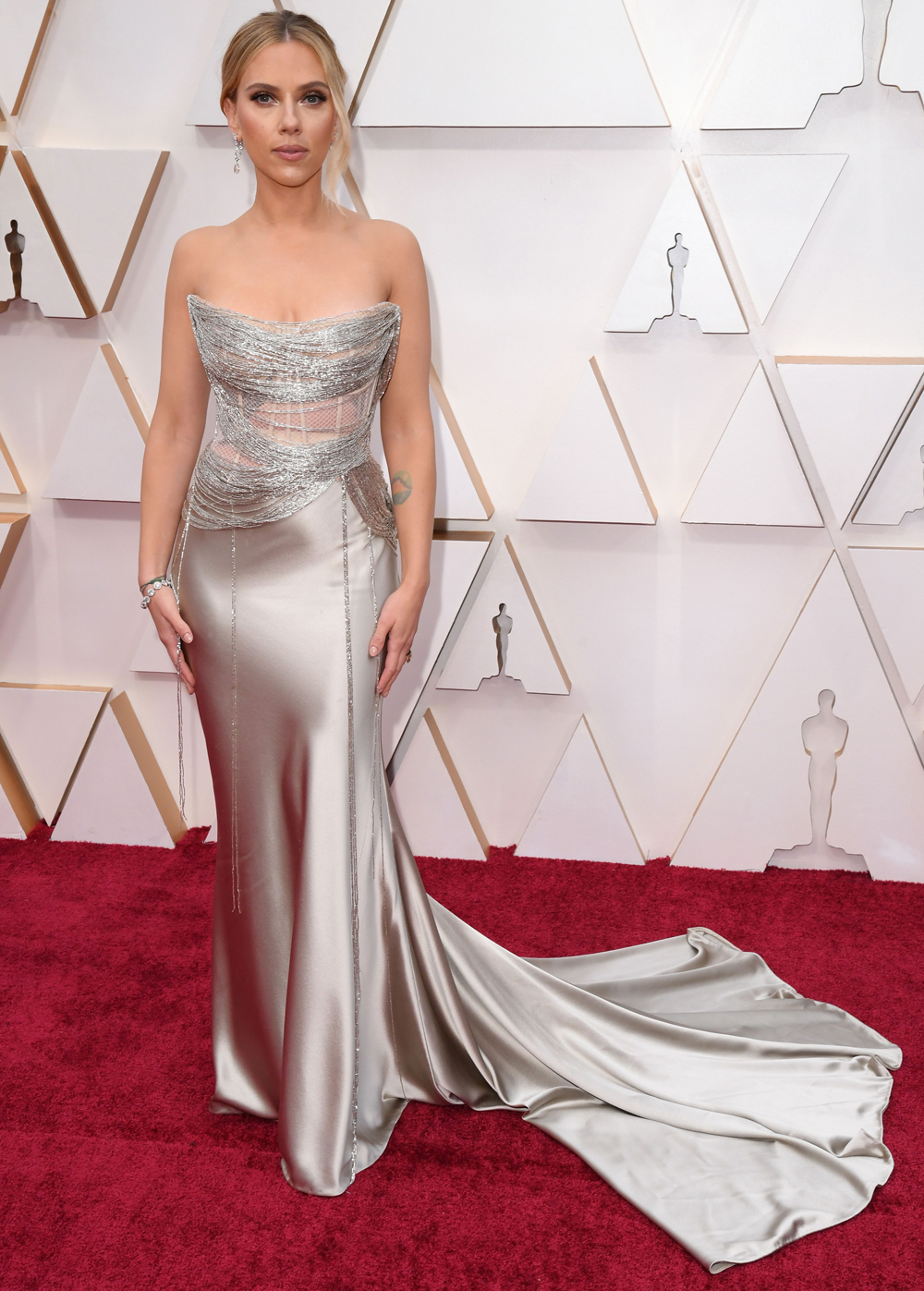 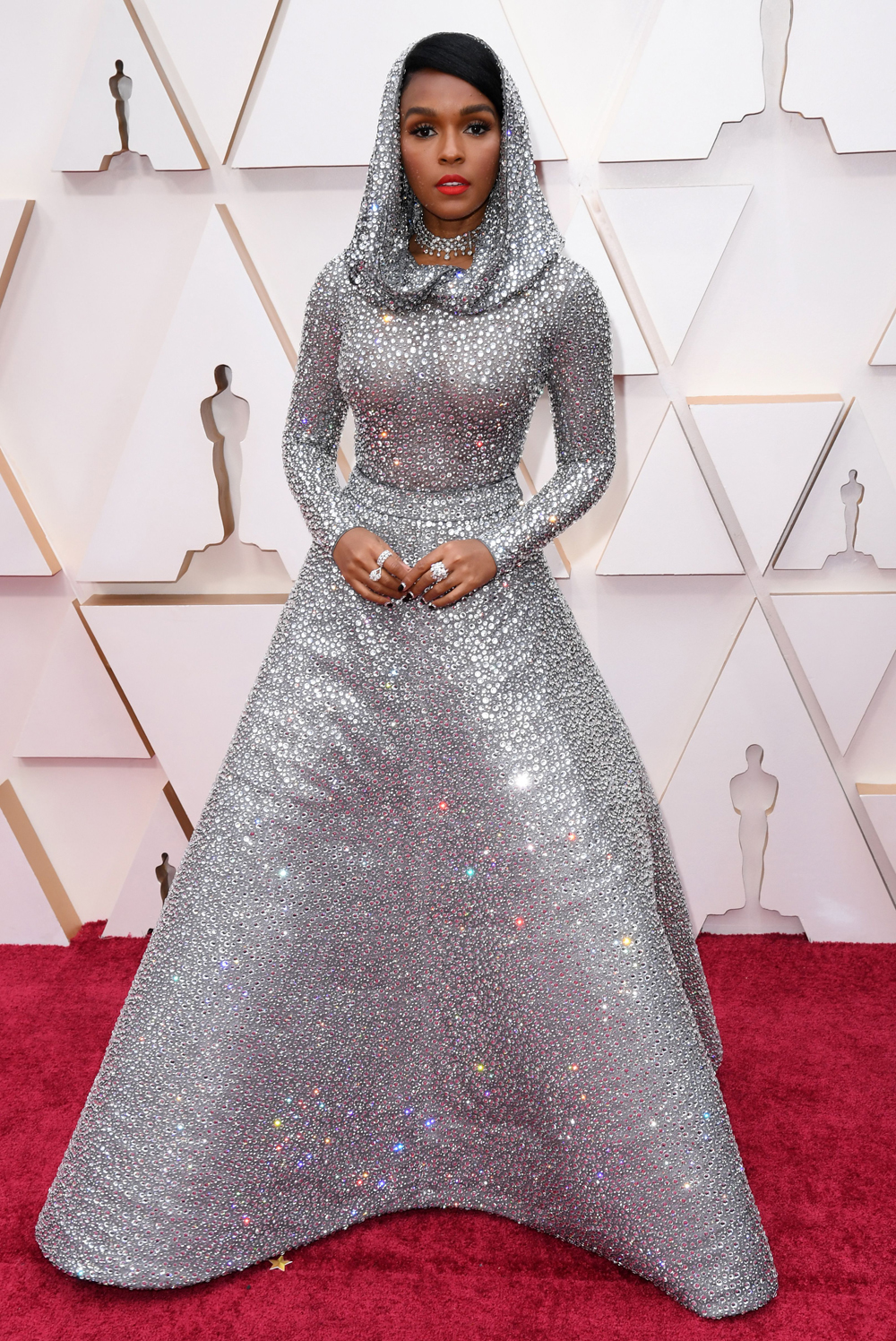 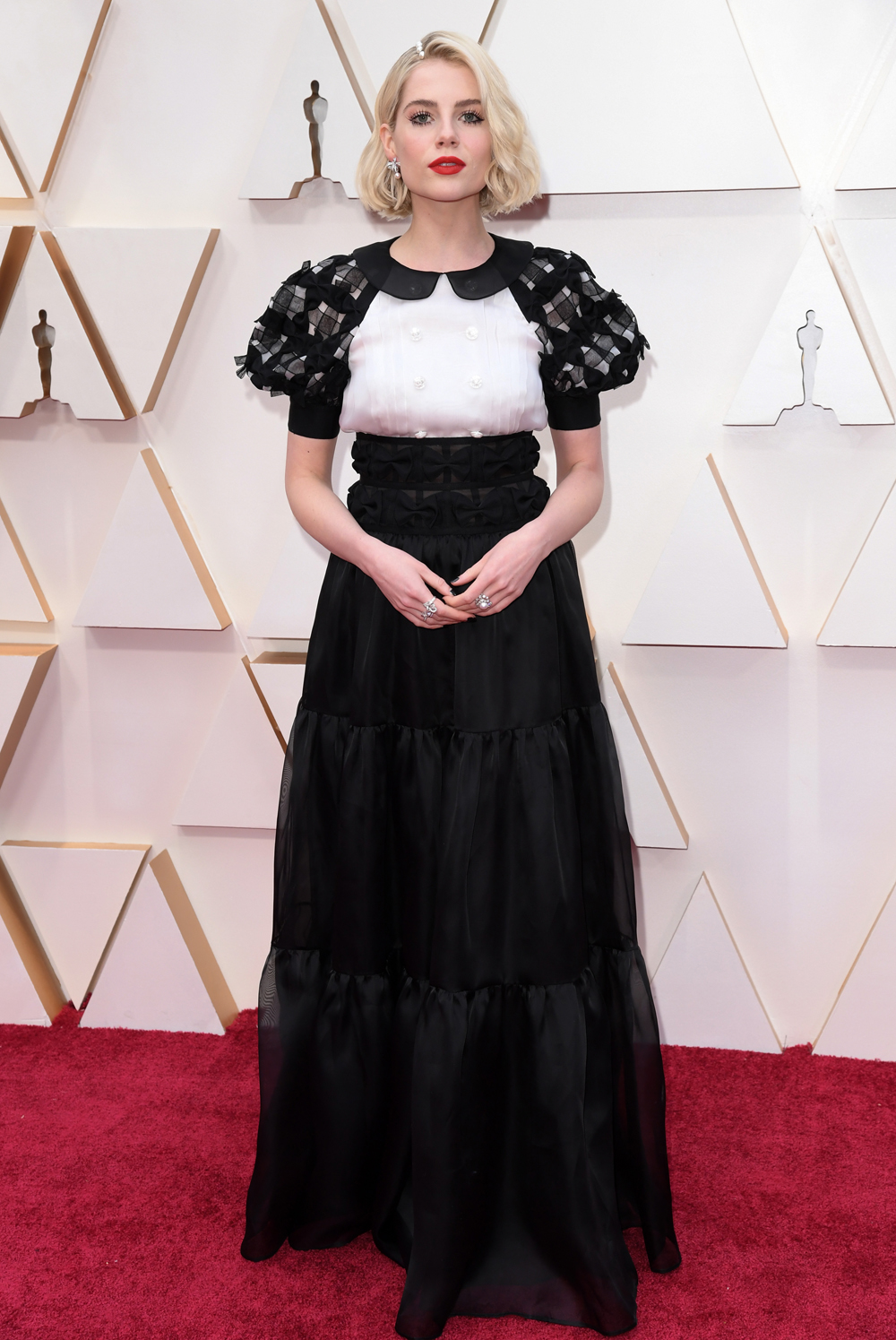 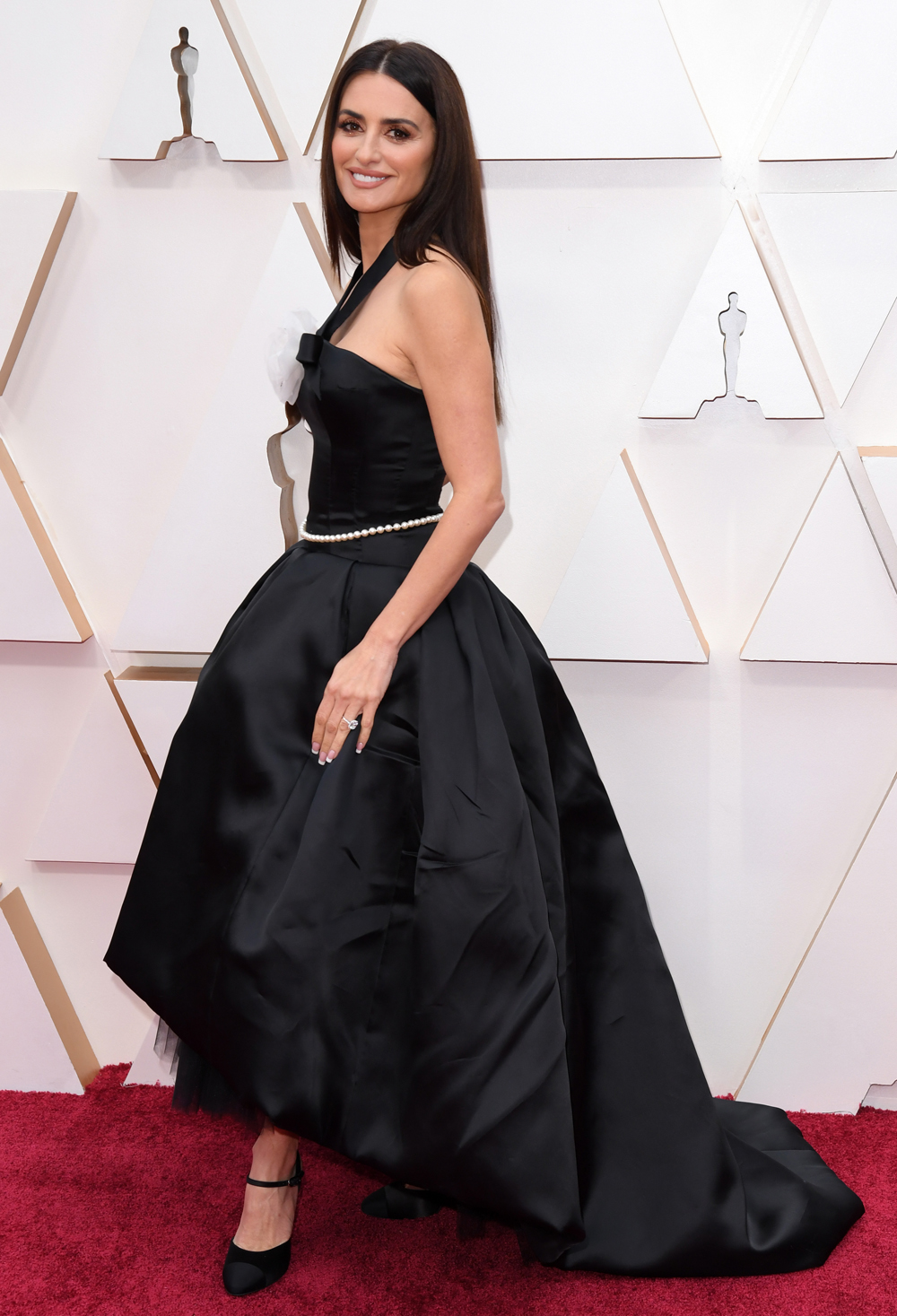 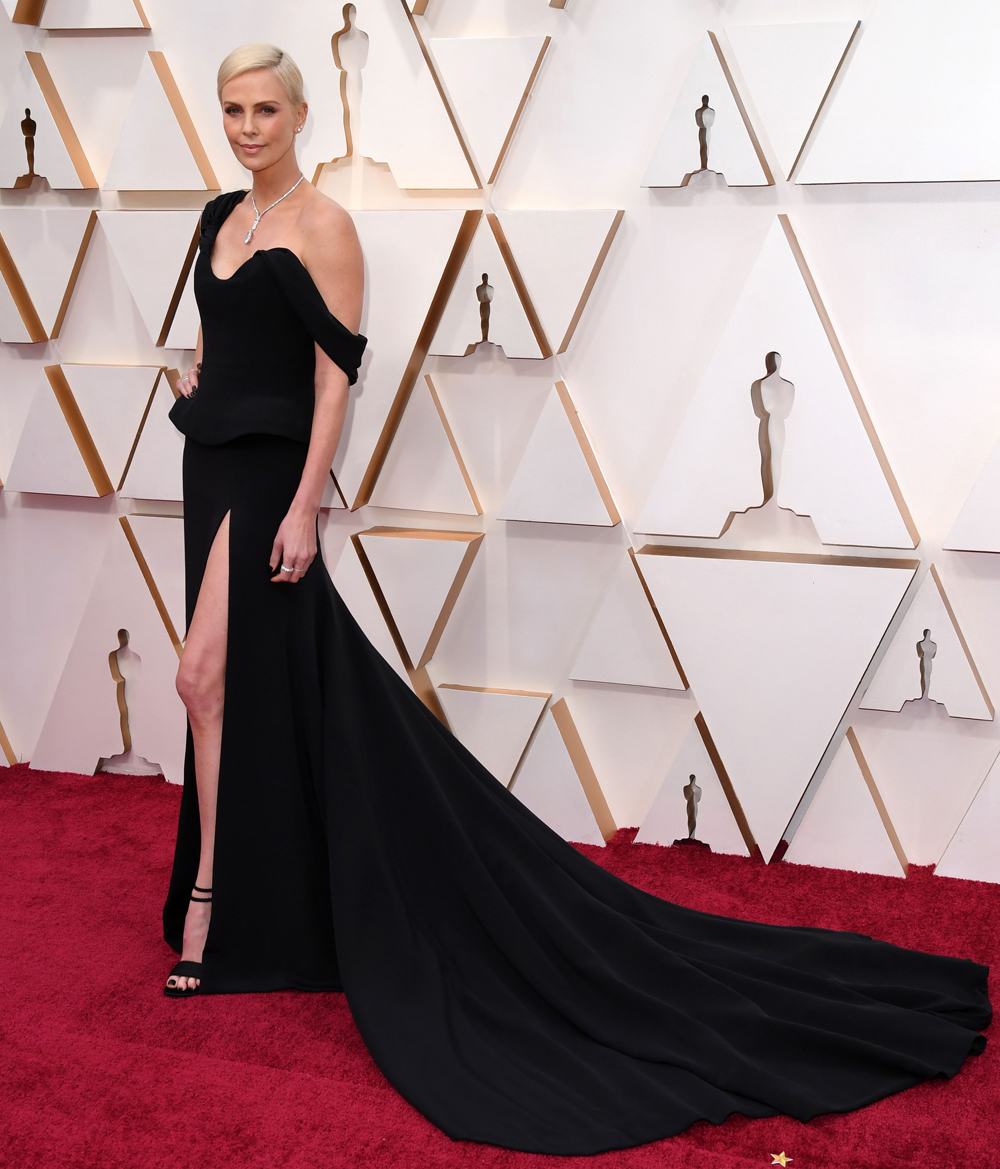 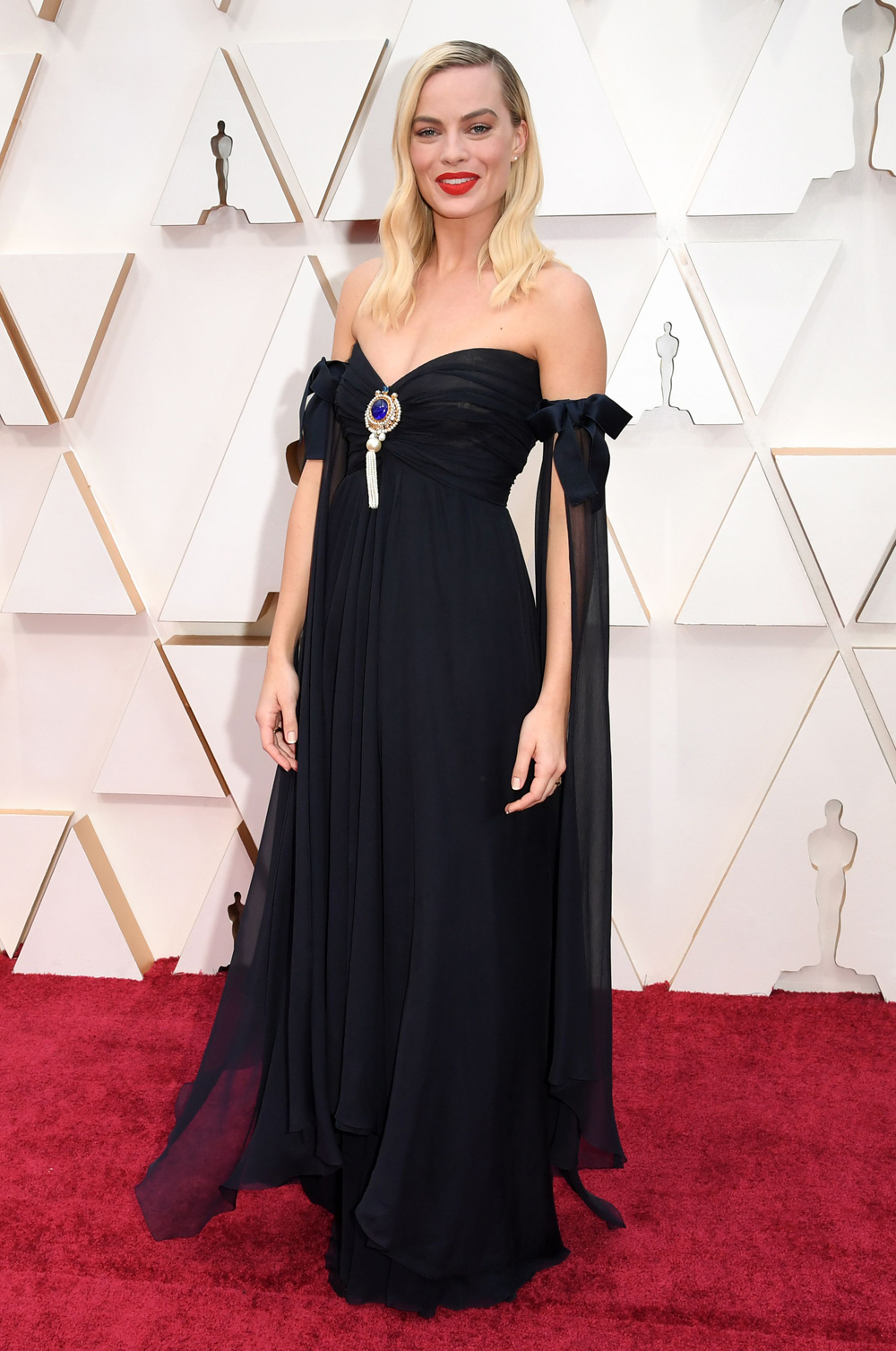 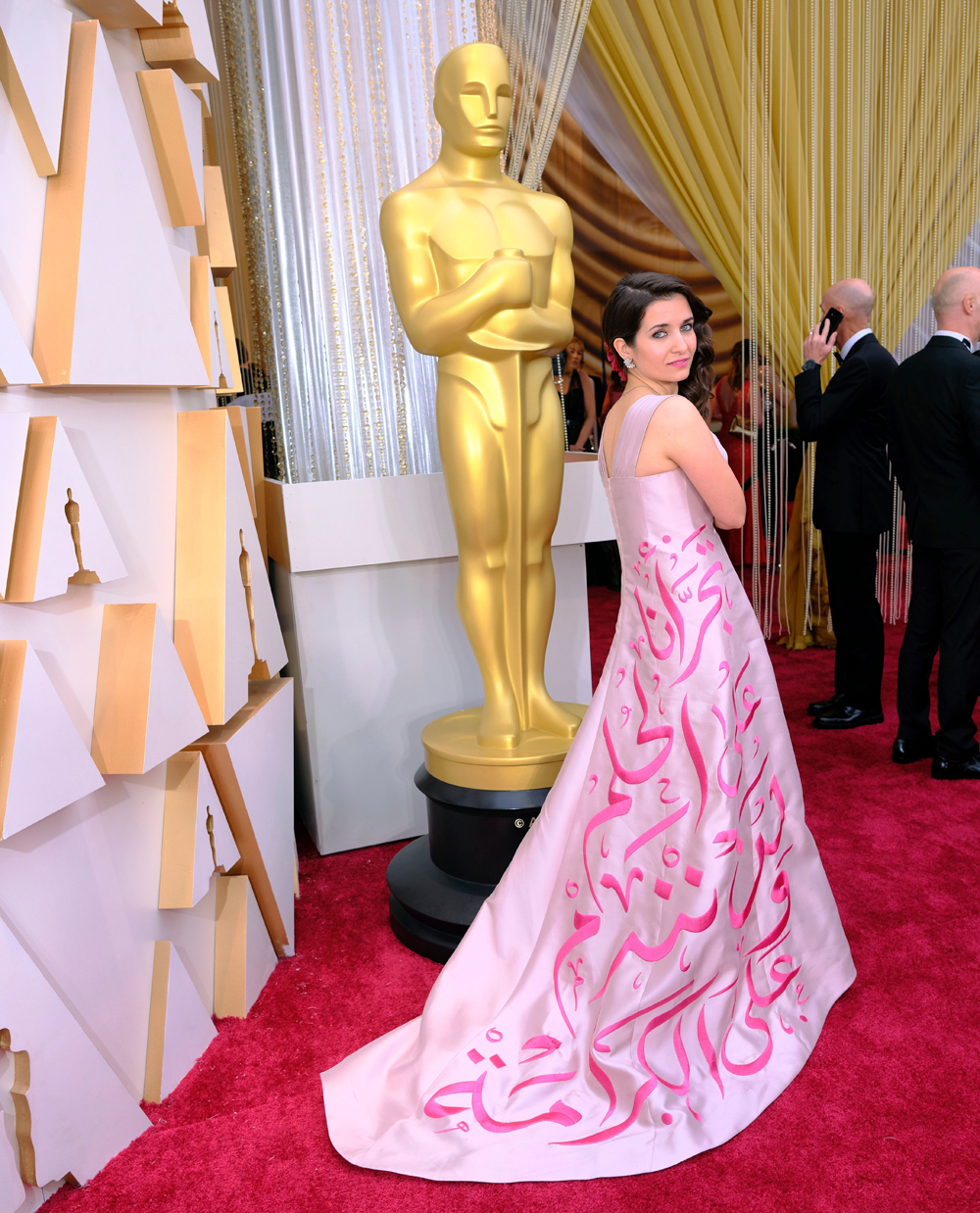 Waad al-Kateab in Reem Masri with calligraphy by Akil​ 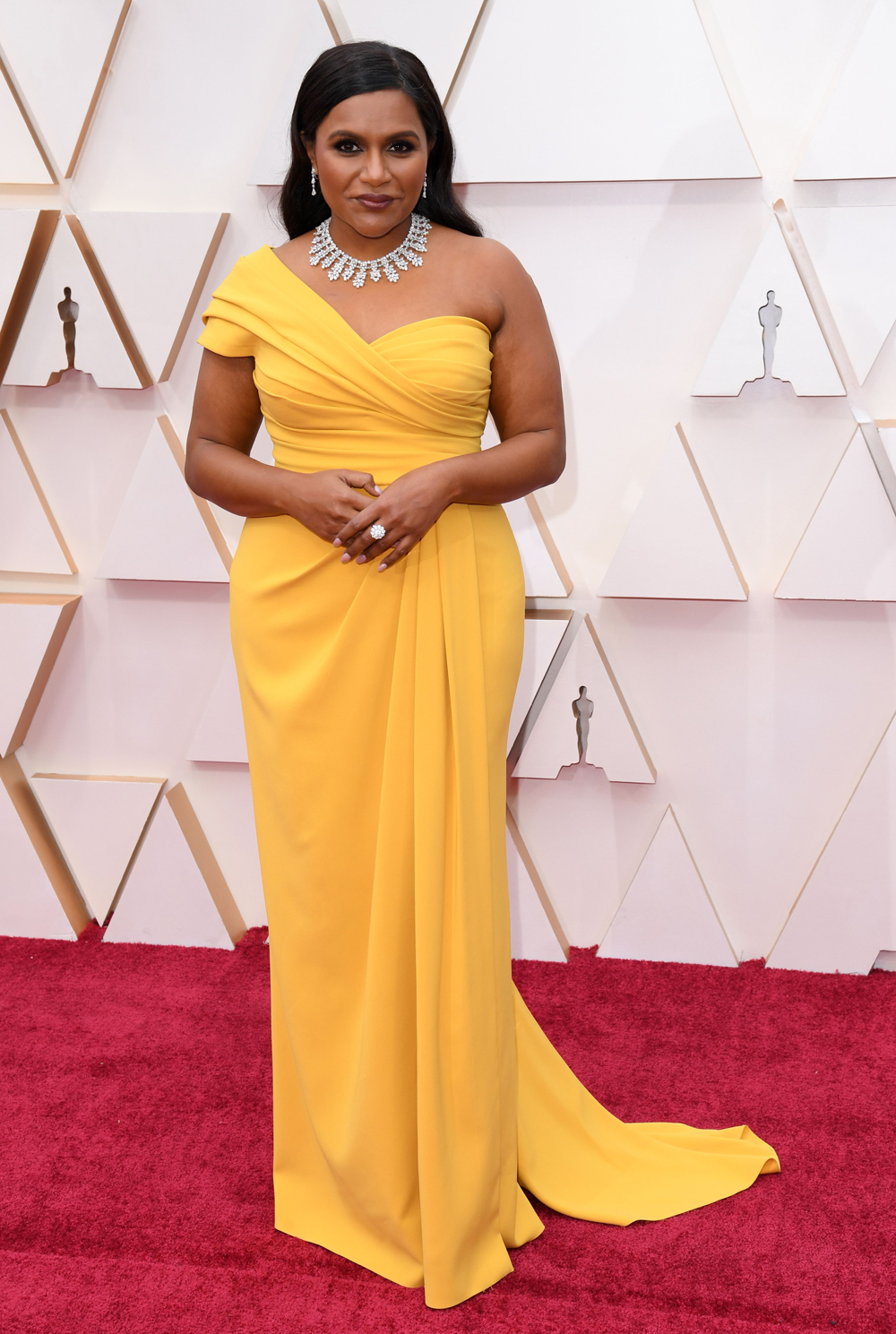 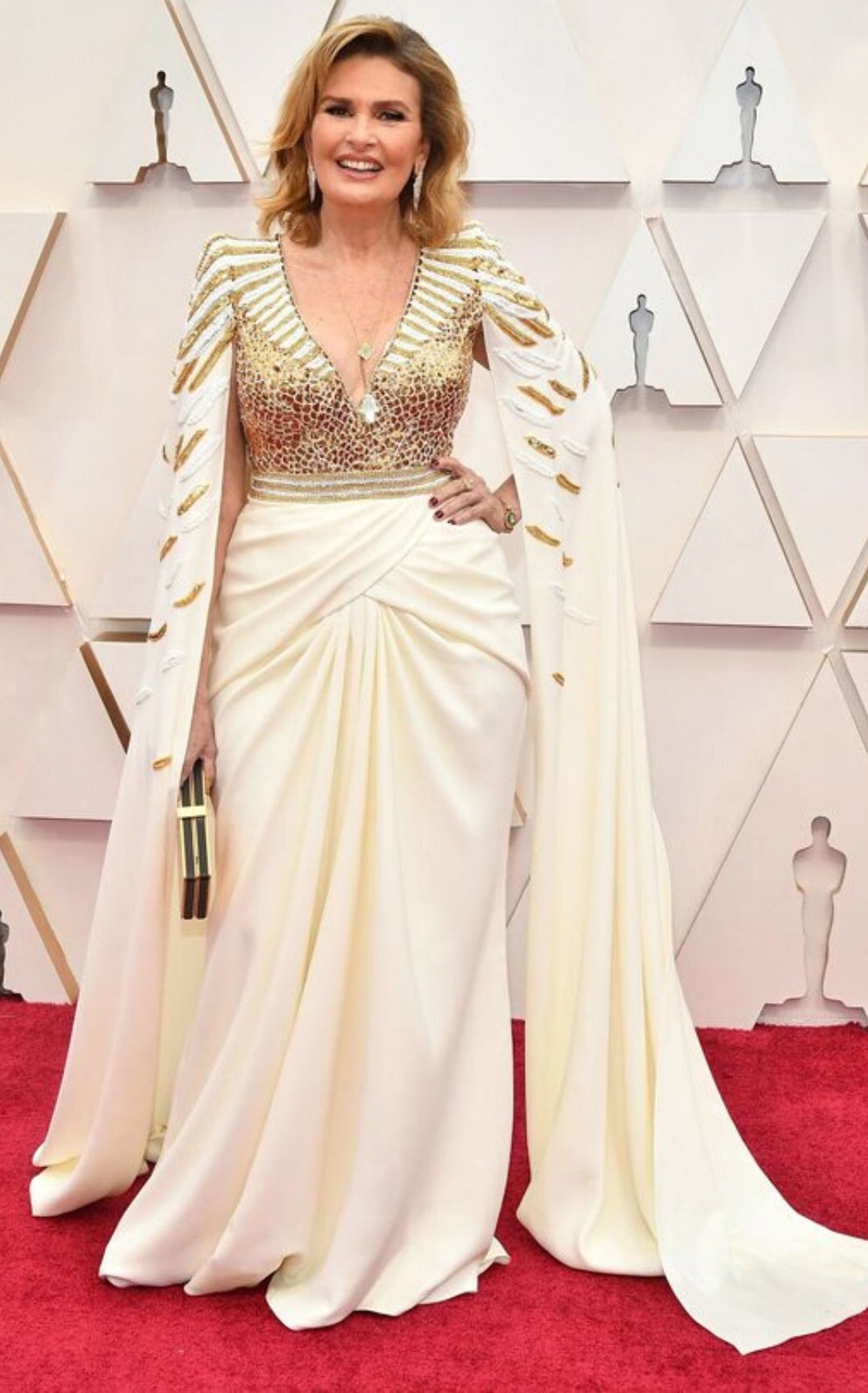 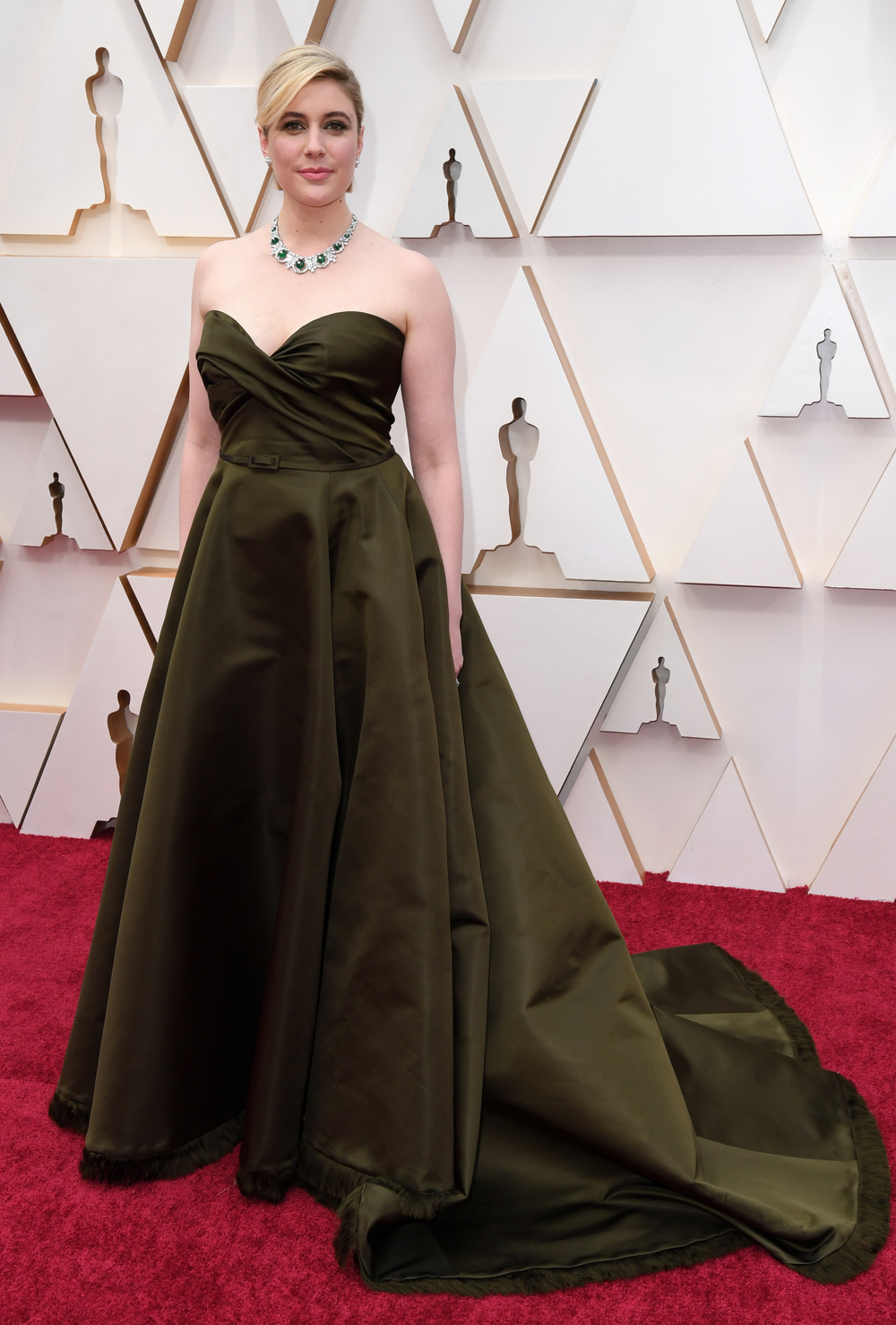