Everything You Can Expect in Saudi Arabia for National Day Celebrations

This year will mark Saudi Arabia’s 89th national day and to celebrate, the kingdom will be hosting festivals, concerts, international acts, fireworks and more. 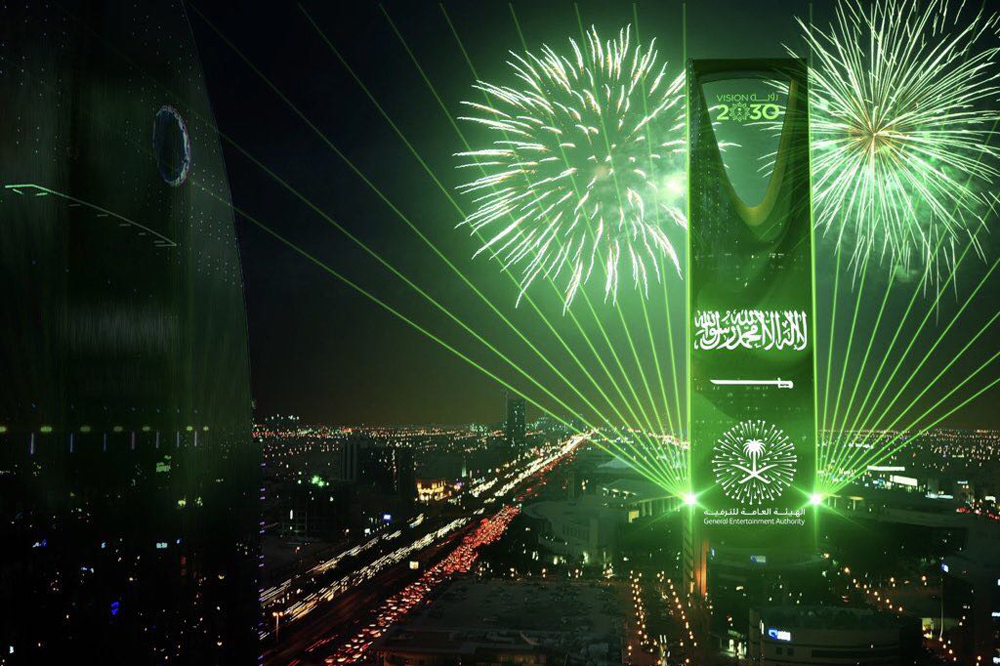 This year, the General Entertainment Authority (GEA) will be putting on the biggest events for Saudi National Day to date. Amr Banaja, CEO of the GEA stated at a press conference that 13 regions of Saudi Arabia would be participating in a number of events from September 19th to the 23rd. He stated that “the GEA is proud to oversee the Saudi National Day Season activities by launching a unified identity that brings together the society under ‘Himma Hatta El-Qimmah.’” Banaja said, inspired by the words of Crown Prince Mohammed bin Salman: “The Saudis’ strength is like that of the Tuwaiq mountain.”

Banaja also added that, “This year fireworks celebrations will continue for several days where more than 700,000 shots will be fired at an altitude of up to 300 meters, accompanied by music. Distinctive international shows designed especially for the National Day will be held in Riyadh.” Laser light shows, special effects and fireworks will light up the skies for all to enjoy in Jeddah over the Al Hamra Corniche, also along with music.

An Overview of the Five-Day National Day Extravaganza:
19th September: The Dhahran Exhibition in Dammam will be hosting the world’s biggest theatrical production, Cirque Du Soleil, which will be performing a special edition show specifically for Saudi National Day.
14 shows will take place, where 40 artists will put on spectacular displays of acrobatics, music, sport and dance. Eight of the concerts will be hosted across various regions of Saudi where Saudi and Arab artists will perform patriotic songs. The first concert will take place on the 19th of September at the Al-Jouf University Stadium in Sakaka where Khaled Abdulrahman and Nabil Shuail will take to the stage.

22nd September: There will be two musical extravaganzas taking place at King Abdullah Sports City in Buraidah, where you can catch Rashid Al-Majid and Balqees Fathi’s performances and the other concert will be at Prince Sultan Cultural Center in Jazan where “The Artist of Arabs” Mohammed Abdo and Turki will also take to the stage.

23rd September (Saudi National Day): On the day itself, Jeddah, Riyadh and Dammam will be showcasing 3 spectacular shows; In Riyadh’s King Fahd Cultural Center thousands of visitors will have the chance to listen to singers Hussein Al-Jasmi and Abadi Al-Jawhar, whilst Jeddah’s King Abdullah Sports City will be hosting artists Rabeh Saqr and Waad. In Dammam, Kuwaiti singer Nawal and the artist Ayed will be part of the entertainment, not to mention that there will be a plethora of inspirational events across 5 cities where popular speakers will be hosting 5 forums.

150 smartphone apps had been launched by the kingdom’s General Entertainment Authority, in preparation for this year’s Saudi National Day and so far, the count of downloads has been around 40,000. Amr Banaja also thanked the people contributing their donations and efforts to the forthcoming celebrations and free national day events.

Saudi Arabia will also be hosting a monumental air show in Jeddah, Riyadh and the Eastern Province, along with a Saudi falcon show in Riyadh, Jeddah and Alkhobar.