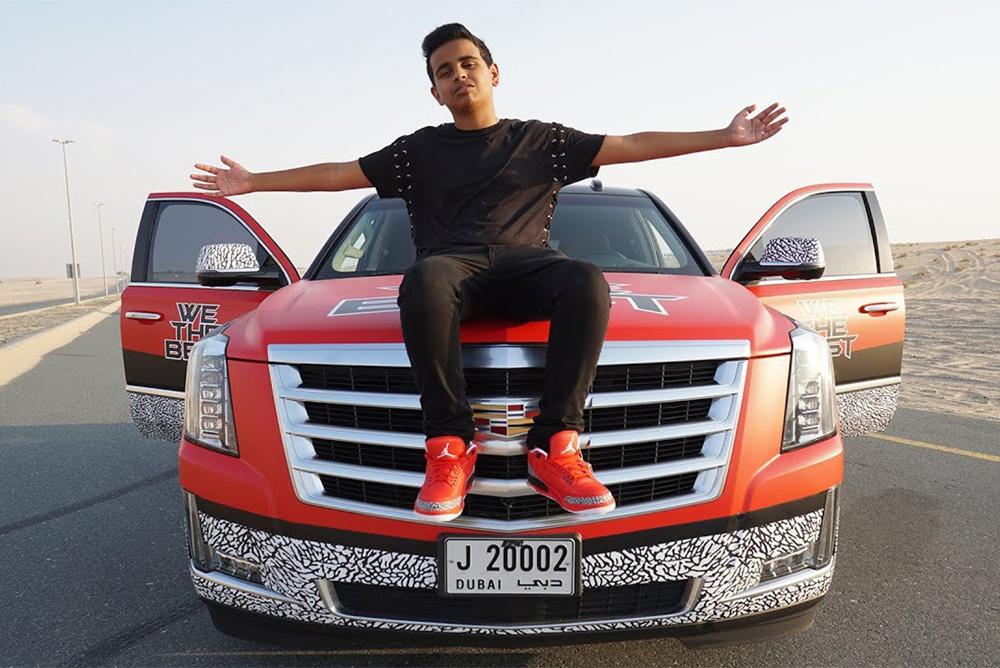 Noted as one of Dubai’s richest kids, Rashed Belhasa, is the son of an Emirati billionaire, who has amassed a following of over 1.6 million on Instagram and 2.2 million on YouTube, where he first emerged showcasing his extensive sneaker collection. He was just 14 at the time.

When he was first seen on YouTube, young Belhasa showed off his collection of sneakers worth around a million dollars in 2017. Not only that, he hosted a number of high profile celebrities at his very own zoo in Dubai, including the likes of DJ Khaled, Mariah Carey and Jason Derulo. Money Kicks is much more famous than one might think as it has been reported that celebrities make appointments to hang out with the Emirati teen. His personal zoo has become a place celebrities want to visit, calling it a "once in a lifetime experience."

Now 17, Belhasa, aka Money Kicks, has just released a single in which he raps about life in the city (of Dubai). Entitled We Living Life, the rap track features Indian rapper, Raftaar, American rappers Desiigner and Fat Joe, German producer S1 and Saudi, Dyler. The song was debuted on music app, Anghami, on August 15th, and has themes that encourage positivity, including faith, power, confidence, and self-esteem and also talks about Dubai.

The 17-year-old rapper and social media star has been rather hands on with his project, from writing lyrics to co-producing with his team. Still up for release will be the music video, which is expected to feature a number of Dubai’s most famous landmarks. Speaking to Khaleej Times, Money Kicks stated, "I co-wrote the lyrics, did the vocals, co-produced and made all the arrangements for the track. We recorded the single in my friend's studio in Dubai. We also have a music video of the single coming up later this month. It features some iconic Dubai spots like the Burj Khalifa, Dubai Marina, Shaikh Zayed Road and other landmarks.”

Heavily inspired by Alica Keys’ and Jay Z’s song about New York, Rashed Belhasa also mentioned the time he was in NYC and where the idea to make We Living Life came from, "There is no English song that talks about Dubai? So, I have [to] do something about it."

We Living Life has been popular since its release, and the young rapper is already hinting at the possibility of more music from him.