Movers and Shakers Celebrate the Legacy of Karl Lagerfeld in Paris

Over 2,500 guests attended a joyful celebration to honour the unprecedented career of a fashion legend… 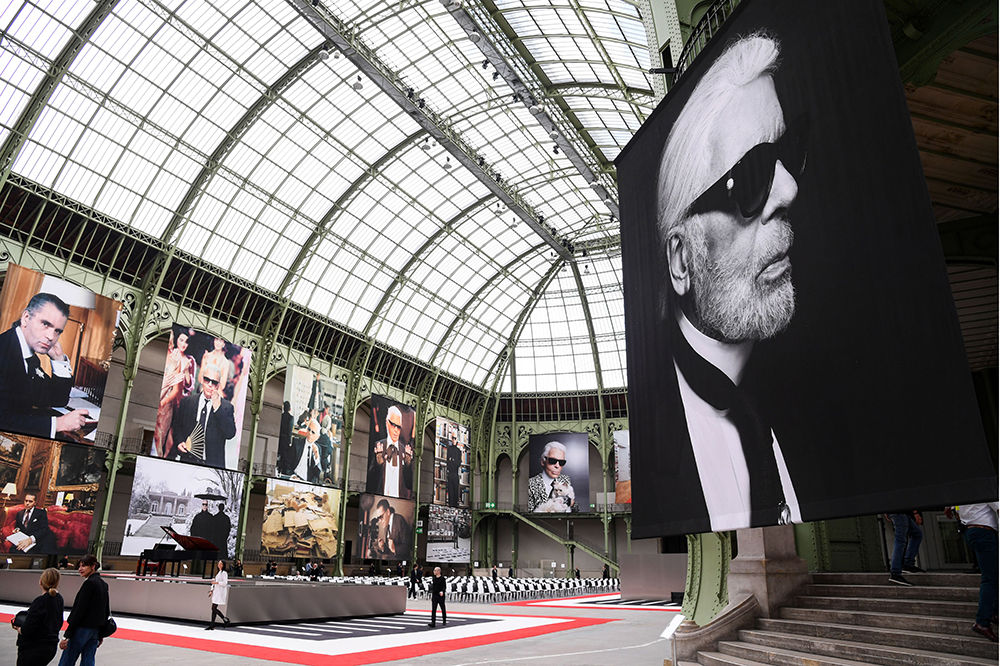 A who’s who of designers, business moguls, models, actresses, society figures and artists gathered in Paris’s Grand Palais Thursday to honour Karl Lagerfeld, one of the most influential figures in the fashion industry. Even some politicians came to pay tribute to Lagerfeld, who died in February. 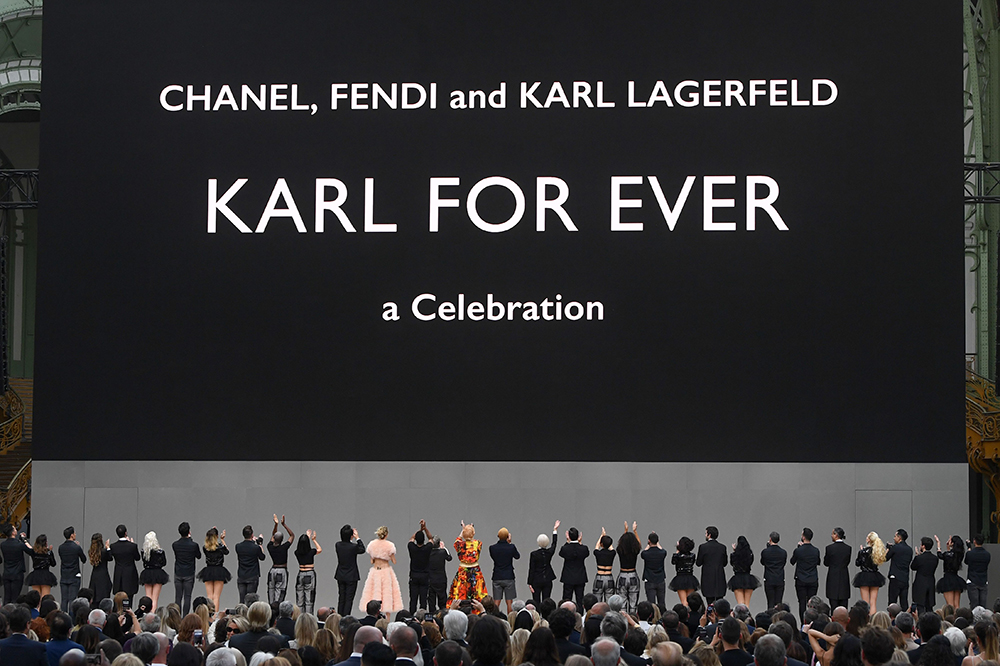 As well as being Creative Director of Chanel, a position he held since 1983, Lagerfeld, who died at the age of 85, served as the creative maestro at Fendi for 54 years, in addition to being at the helm of his eponymous label. So, it isn’t a surprise the aptly lavish Karl For Ever memorial, which observed the life and achievements of the prolific designer with a career spanning over 70 years, was organised jointly by the three houses. 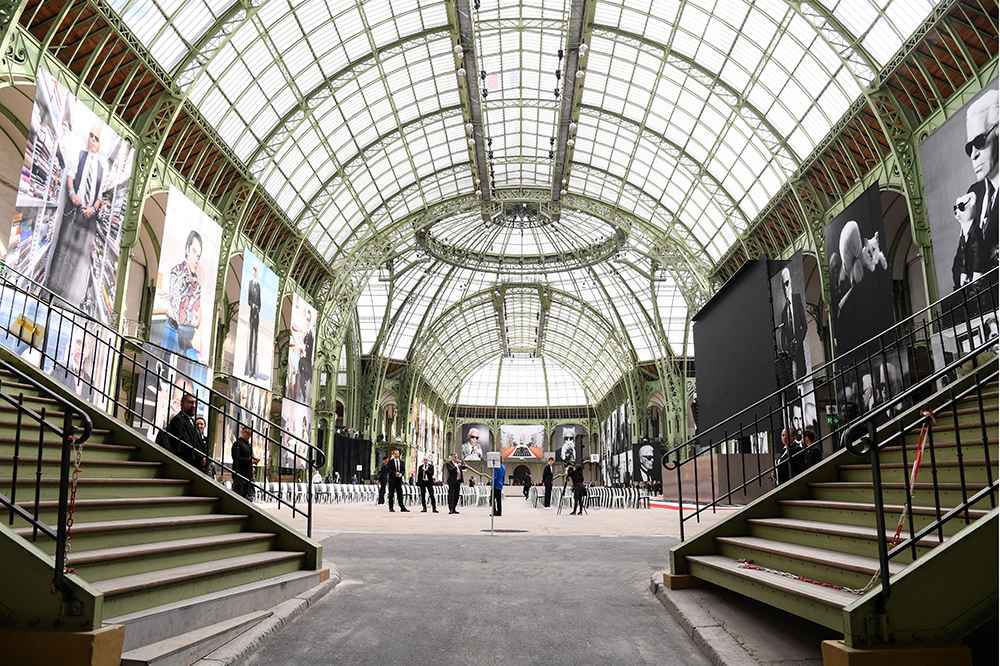 "This whole thing is all woven and sewn together with Karl in mind, aiming to get the sense of proportion and detail he was so good at," Canadian theatre and opera director Robert Carsen, who created the production, told Women’s Wear Daily before the event. He also told the publication he “wanted something full of life and unexpected” and the occasion was chiefly “a joyful celebration of all things Karl.” 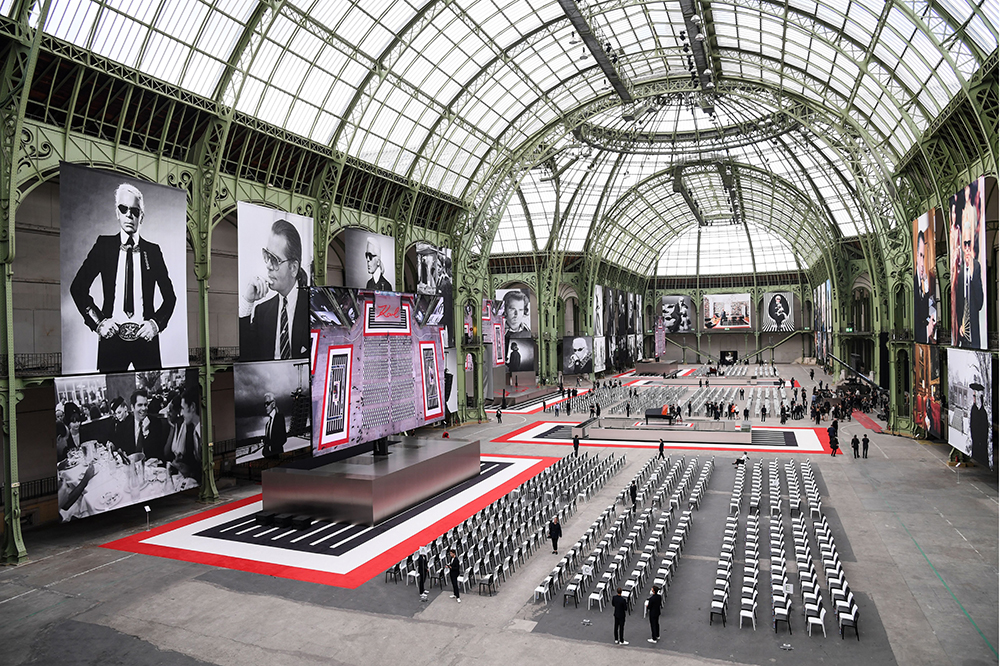 For the 90-minute event, the Grand Palais, where Lagerfeld often held his spectacular shows, was decorated with supersized monochrome screens and portraits of the designer, who is also celebrated for being a photographer, artist and publisher.  While some were self-portraits, others were shot by photographer Annie Leibovitz. Black and white chairs dotted the stone, steel and glass architectural masterpiece, and there were some rectangular aluminum bars. Arranged in interlocking Ls, they were a nod to the double-F logo Lagerfeld designed for Fendi in the 60s. 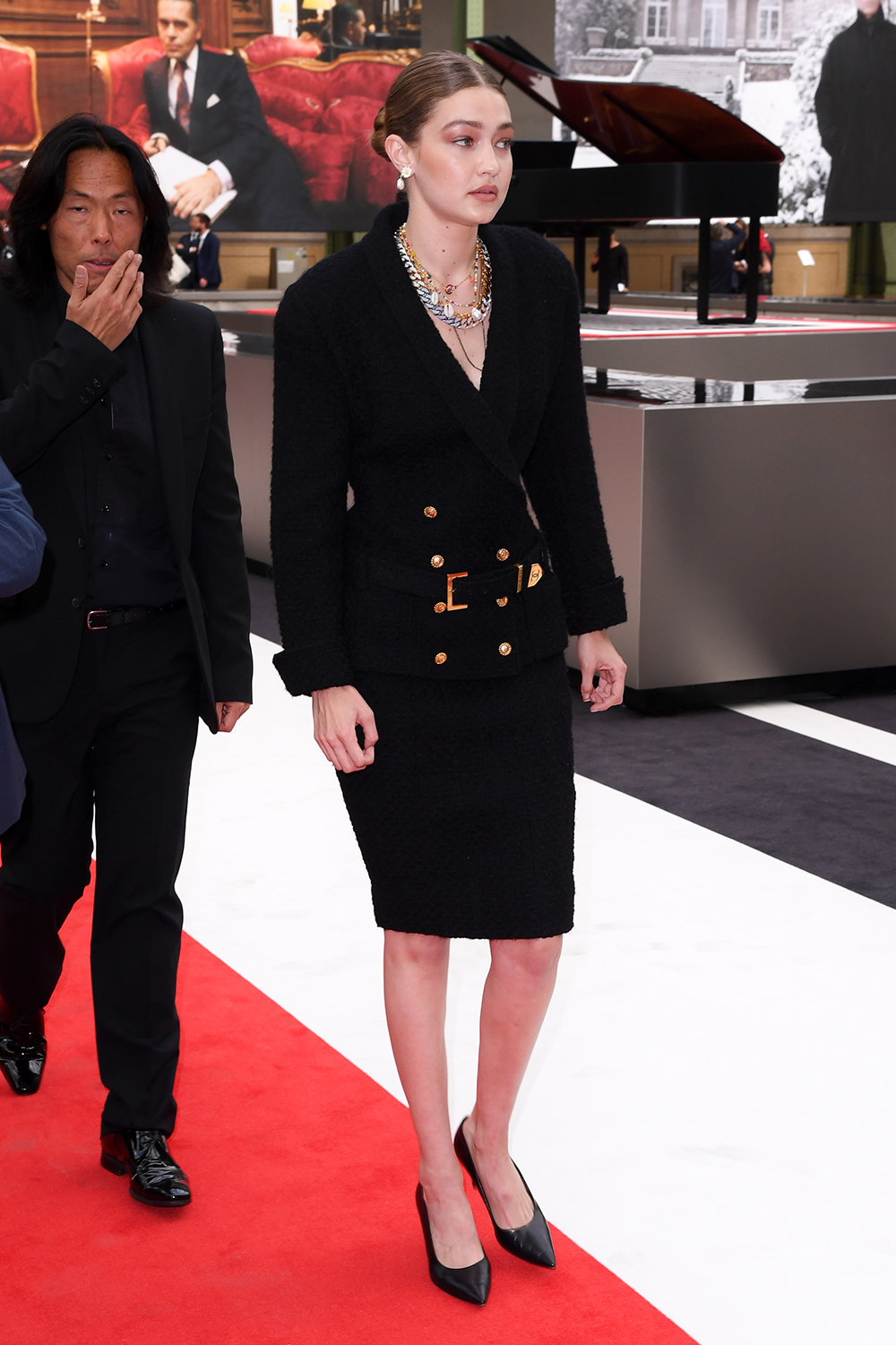 The ceremony began with a video of Lagerfeld interviewing himself, and then renowned models, including Gigi Hadid and Claudia Schiffer, and other friends of Chanel like Carole Bouquet, Inès de la Fressange, Caroline de Maigret, Kimora Lee Simmons and Carine Roitfeld, got to listen to all the moving on-screen homages from friends and colleagues that followed. 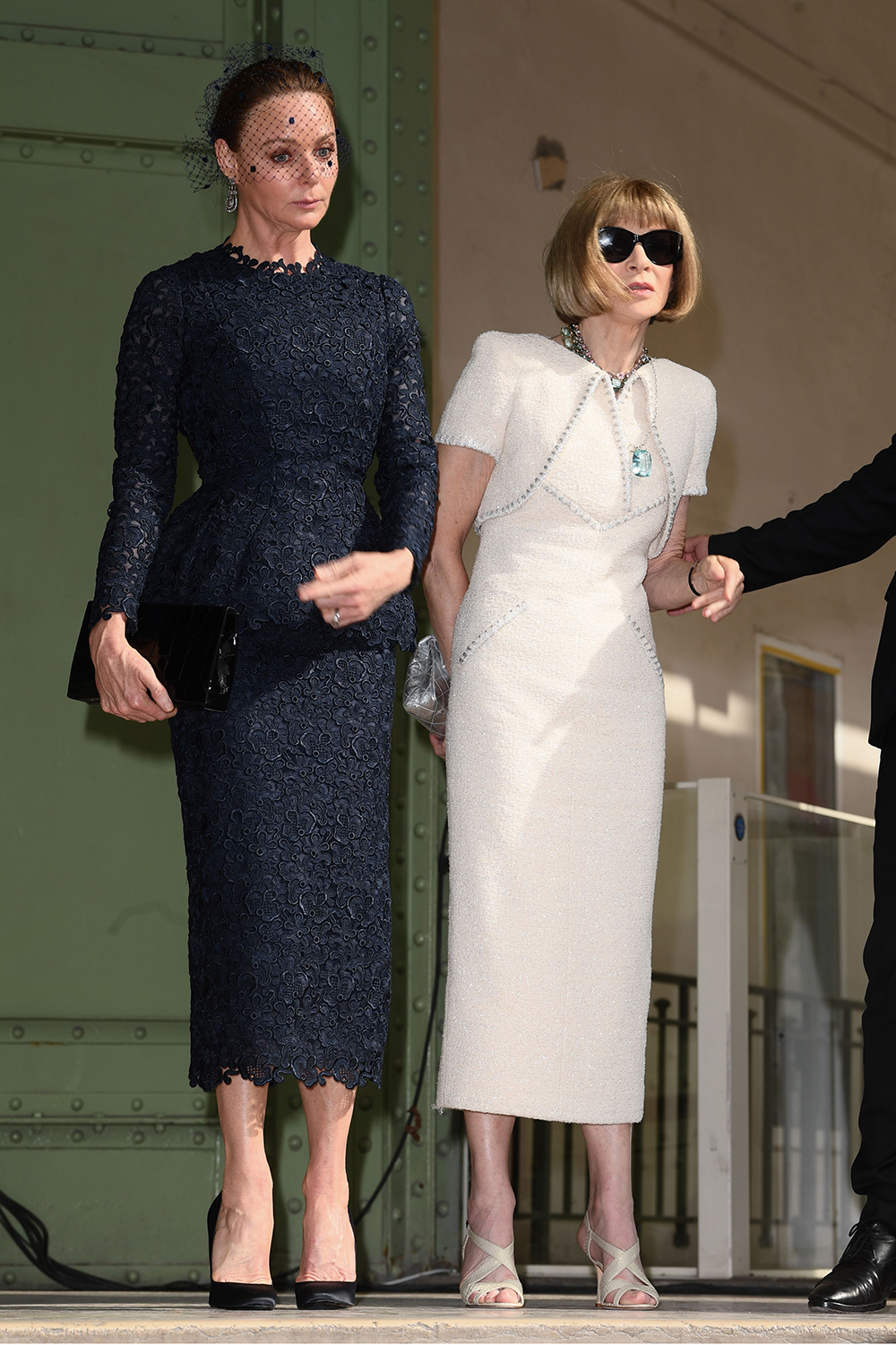 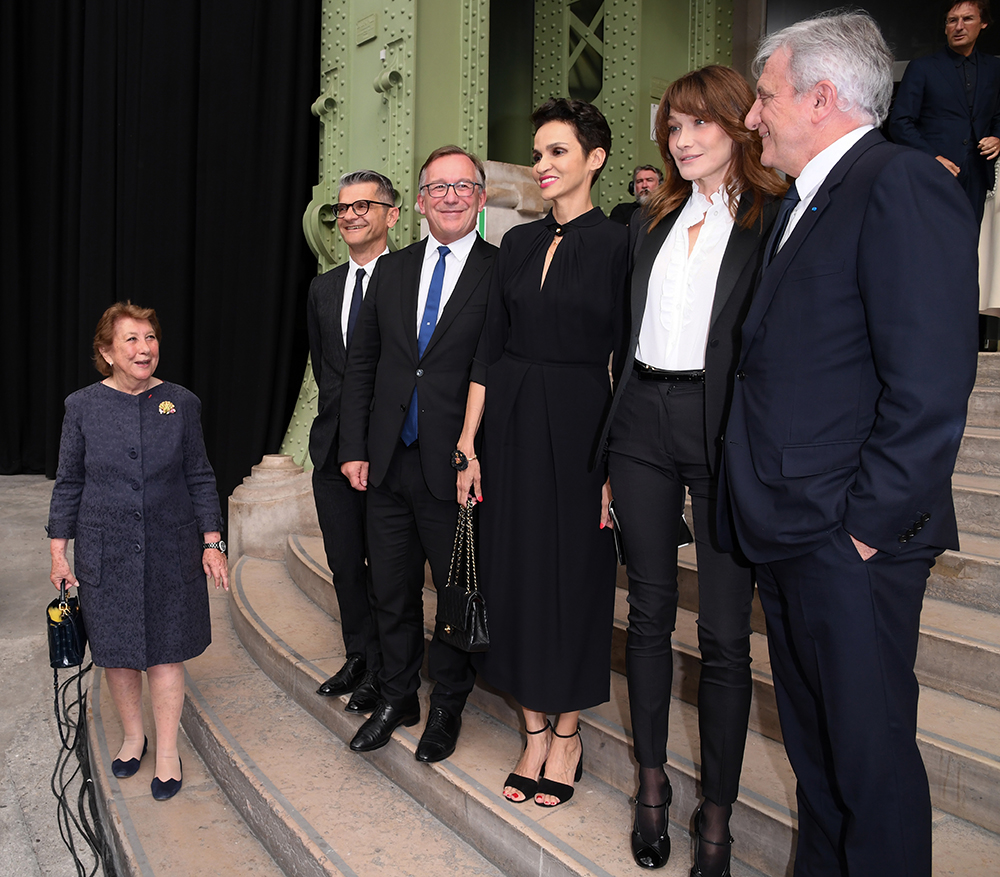 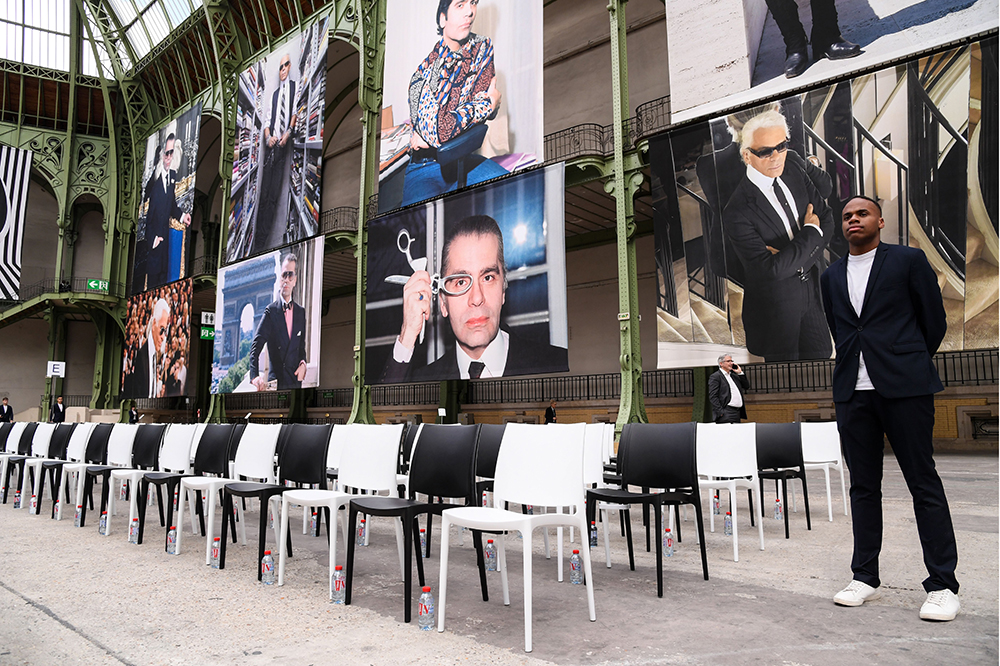 A poignant testimony came from Virginie Viard, who worked alongside Lagerfeld for 30 years. “Karl is probably the person I’ve spent the most time with in my life. To me, he was accessible. My opinion counted. Above all, he loved my energy and my ideas, and he showed it. Together, we created the most beautiful collections that we could and today, I’m trying to continue so that everything is perfect for him,” the new Creative Director at Chanel said. 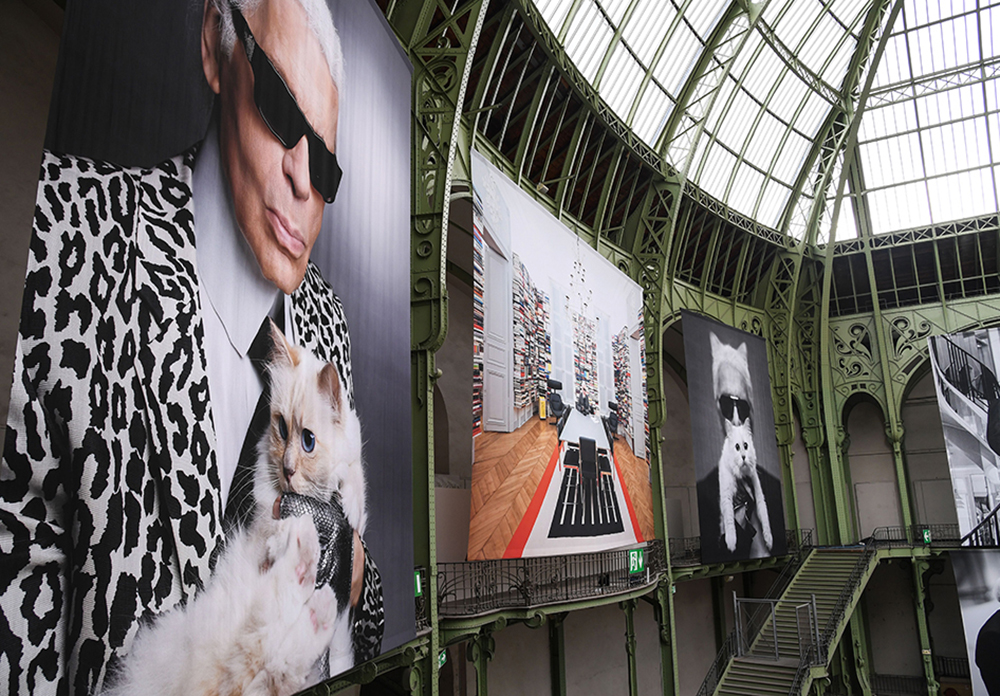 Silvia Venturini Fendi, who is now heading the Italian luxury fashion house founded by her grandparents, also said some moving words. “I still ask myself, ‘What would Karl think about that, what would he do if he was in my place?’ The thing today for me, it is difficult to think that he’s not there. Because he was always late, I always think that he will arrive. Maybe this time he’s a little bit more late than before, but he will show up,” she said. 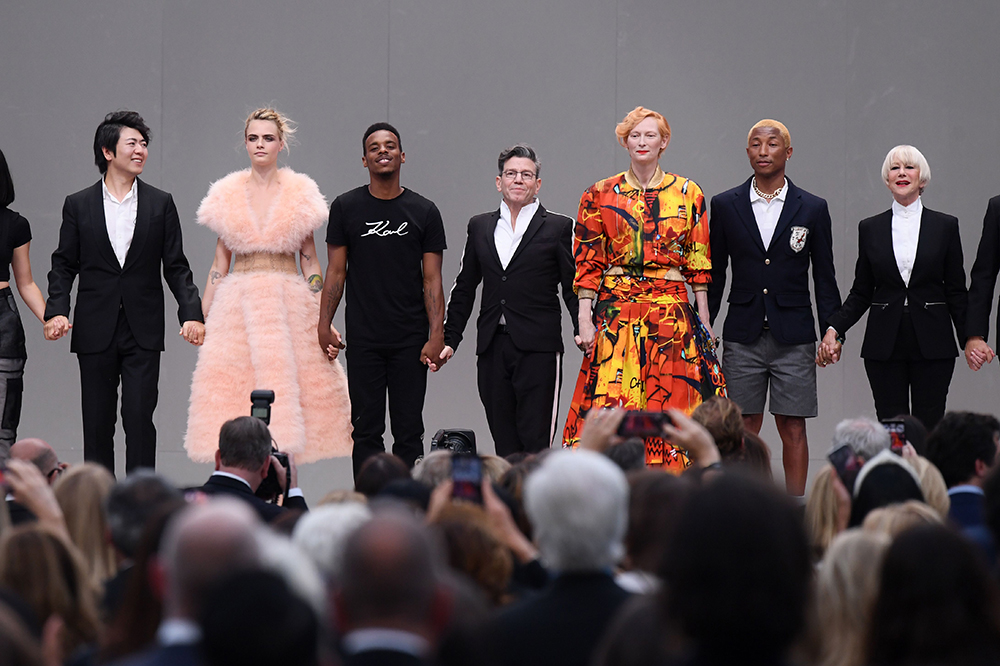 With the help of edited clips from the archives, Lagerfeld himself narrated the proceedings as a group of designers, including Ralph Lauren. Valentino Garavani, Alber Elbaz, Haider Ackermann, Pierpaolo Piccioli and Alessandro Michele listened on. Stella McCartney, who took over from Lagerfeld at Chloé, was also one of the guests who got to see clips from his most memorable shows, whether it was the Fendi one held at the Great Wall of China or the Chanel spectacle that had him transform the Grand Palais into a seaside resort. 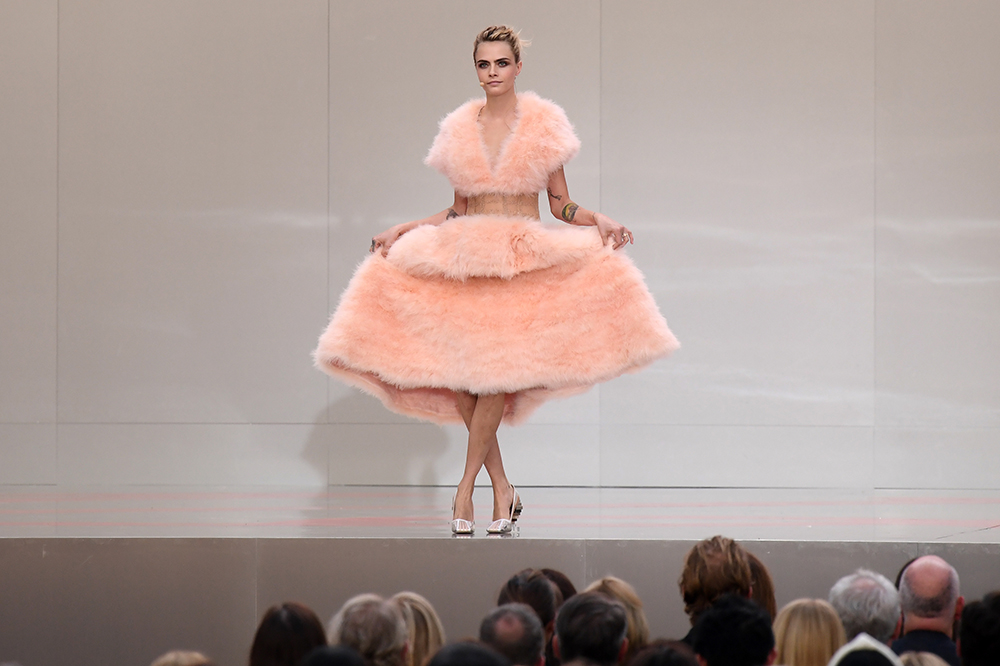 Karl For Ever also saw the heads of luxury brands rub shoulders. LVMH Moët Hennessy - Louis Vuitton Chairman and CEO Bernard Arnault, Alain Wertheimer, one of the brothers behind Chanel, and Kering CEO François-Henri Pinault were just some of the big wigs attending. 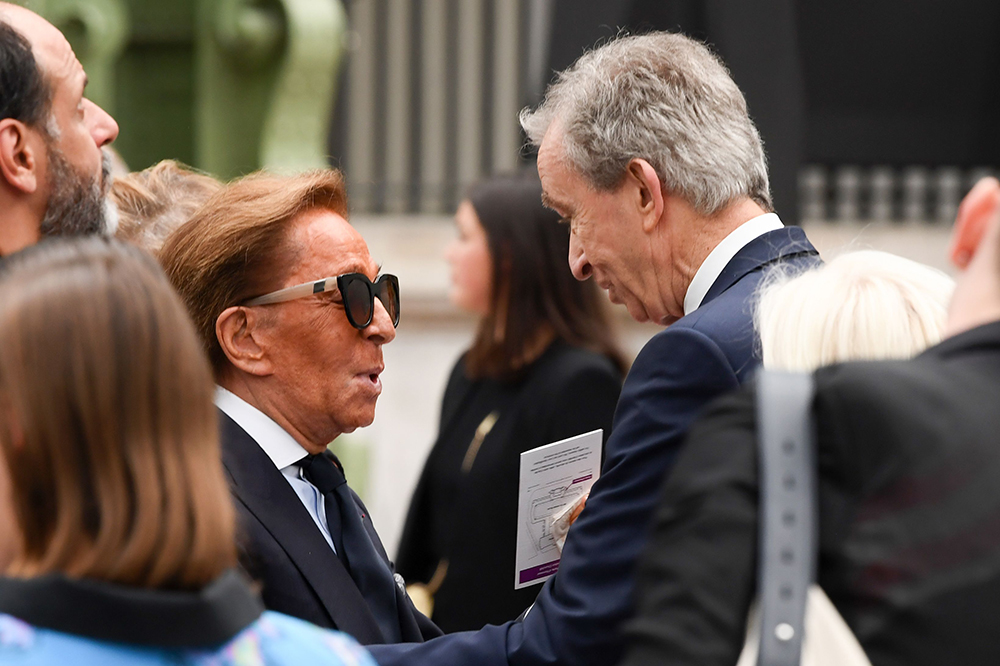 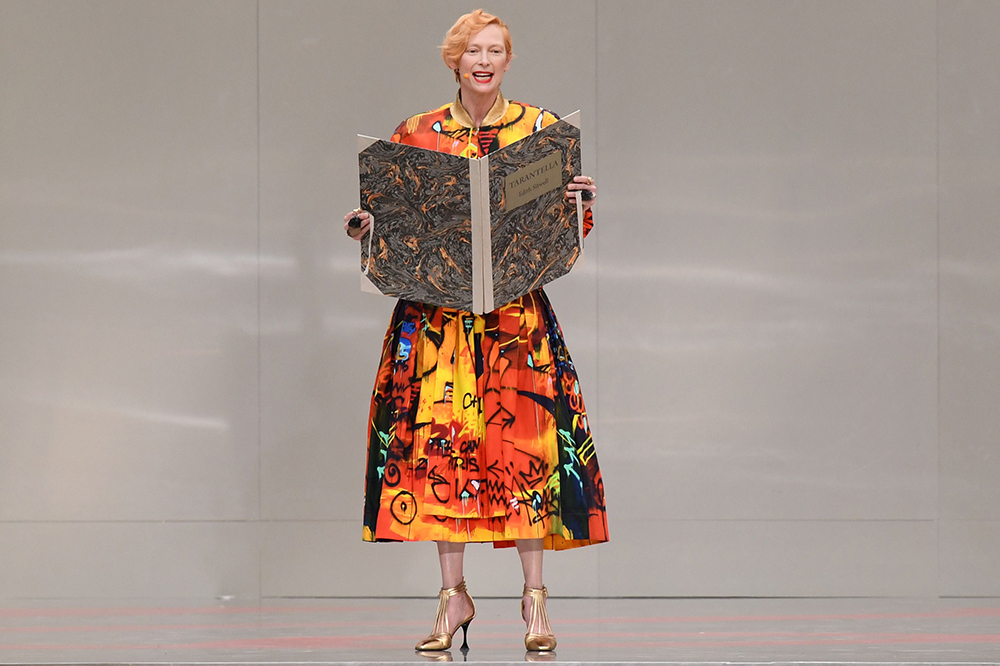 Dressed in a tweed peplum jacket and bloomers, Swinton read an extract from Virginia Woolf’s Orlando, while Delevingne, in a fluffy pink feathered dress, read a French poem about cats by Colette as images of the designer’s beloved pet Choupette dominated. 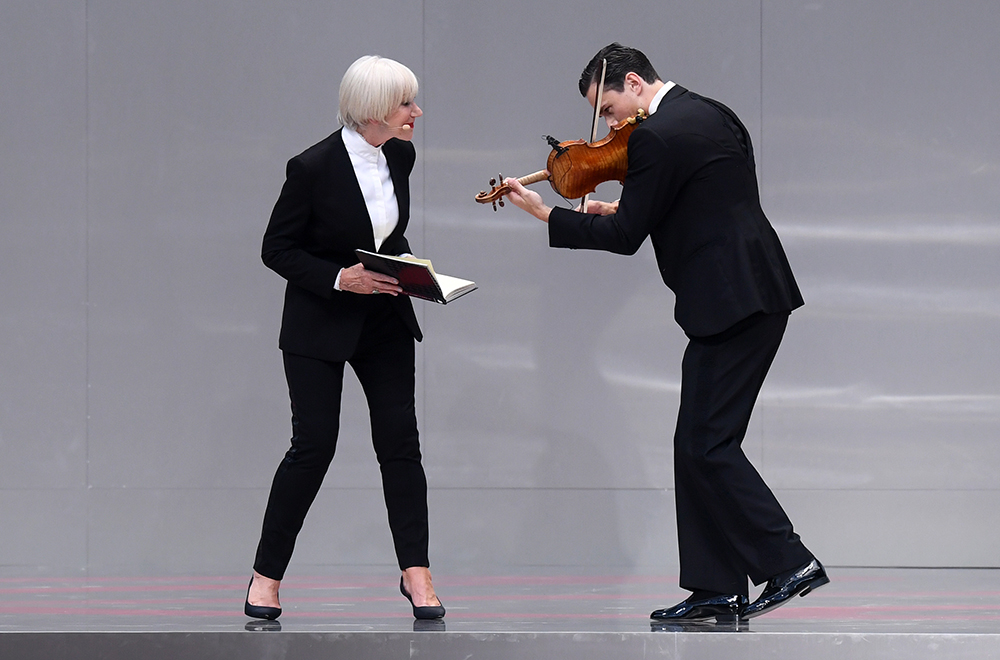 Dame Helen Mirren read excerpts of The World According to Karl: The Wit and Wisdom of Karl Lagerfeld, a book of quotes by the designer, alongside Charlie Siem, who jazzed up every quote with his violin. Plus, French actress Fanny Ardant read a poem by Stéphane Mallarmé. 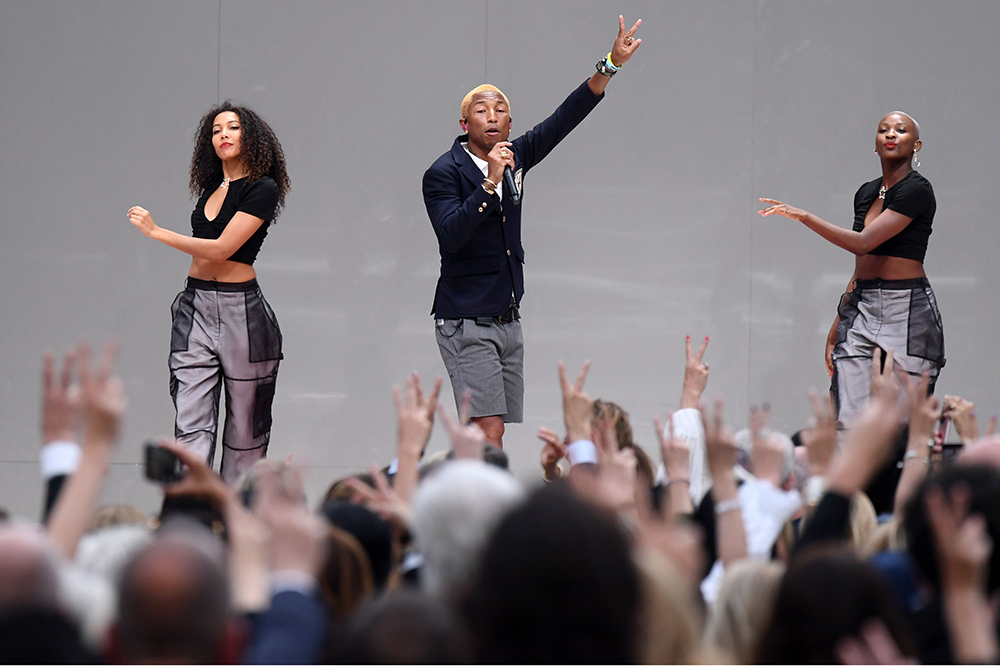 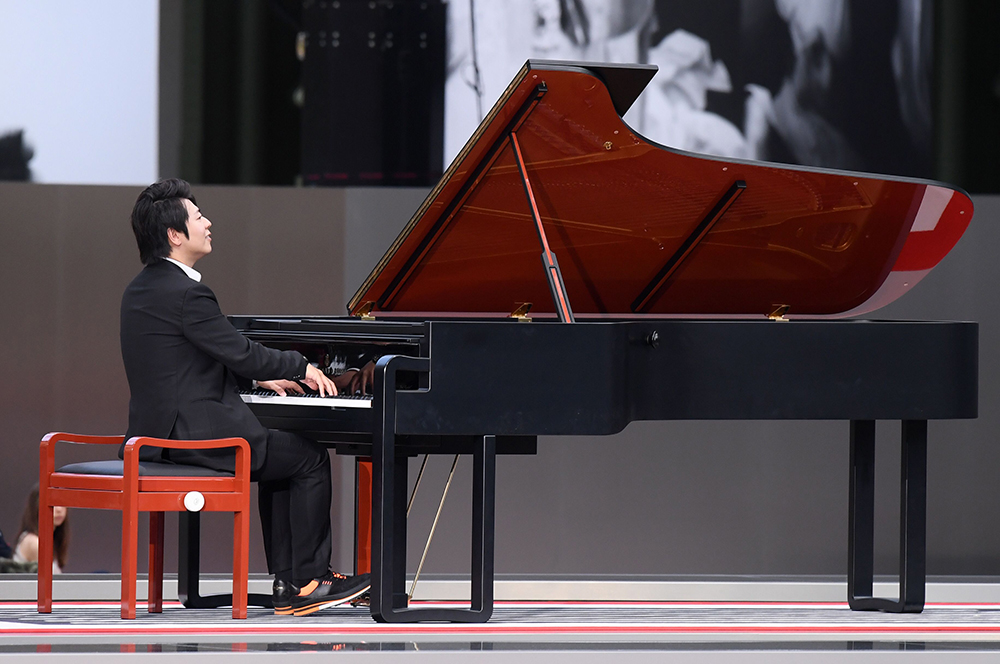 The latter performed Chopin’s Waltz No. 1 in E flat major on a Steinway piano designed by Lagerfeld himself, while Williams sang Gust of Wind. 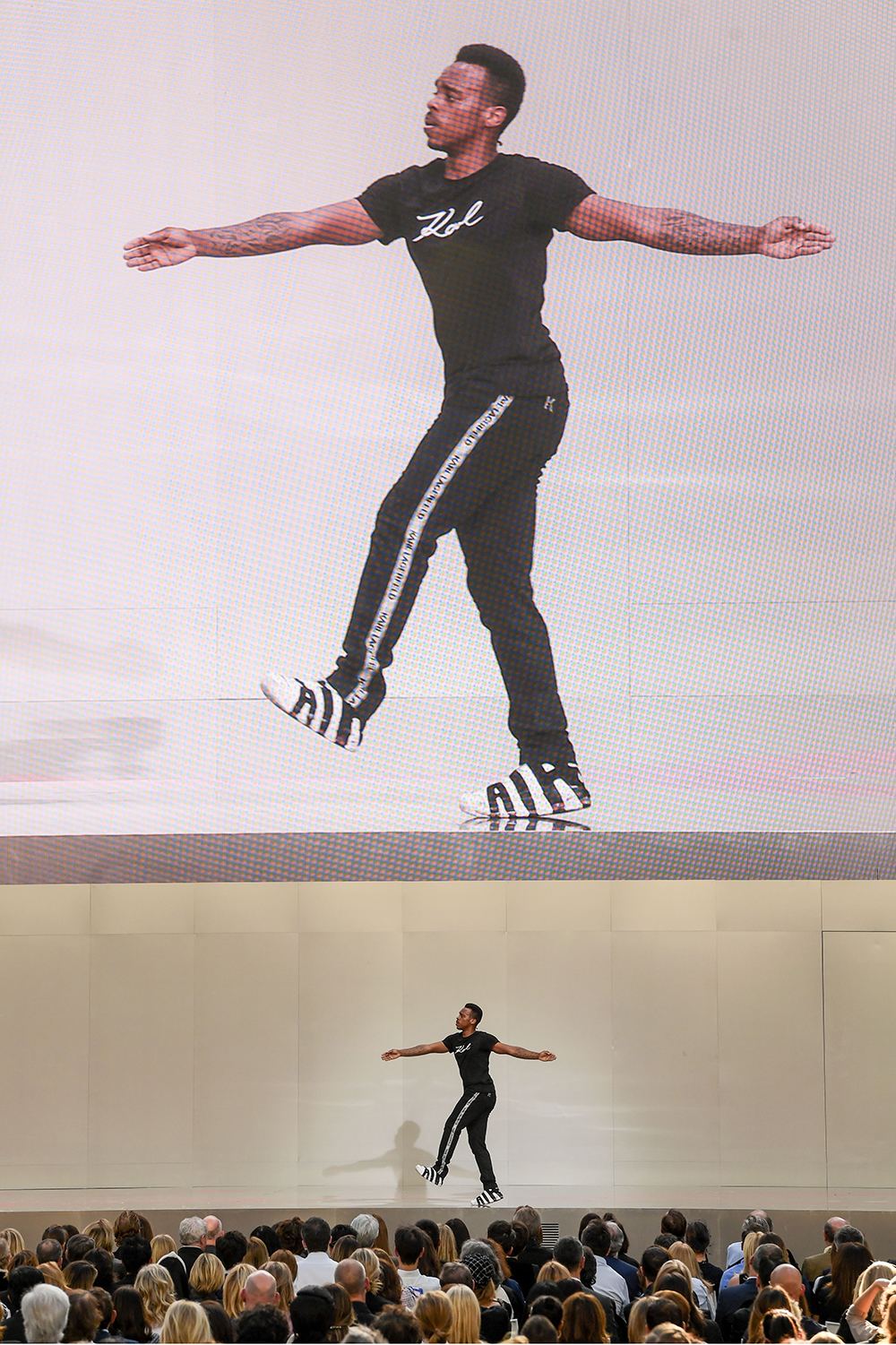 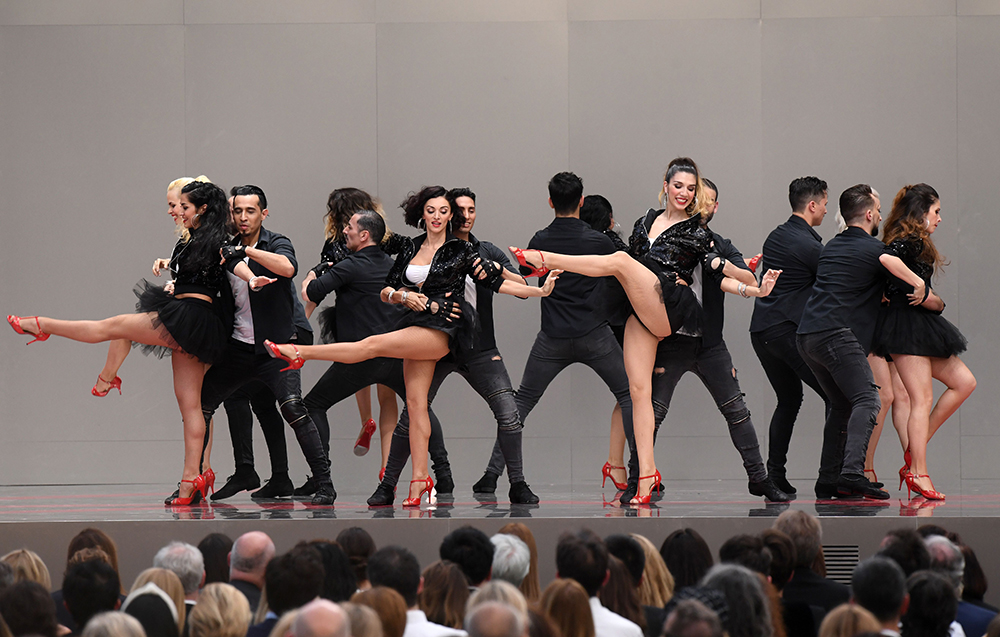 Since the German designer was known to love the tango, a troupe of 17 tango dancers from Argentina also performed during the one of-a-kind memorial for Lagerfeld.

Click here to read about Karl’s past, proclamations, and patrimony.