Before winning the notable prize, the songbird was one of five singers chosen out of 500 contenders to be accepted in the renowned Paris Opera Academy. 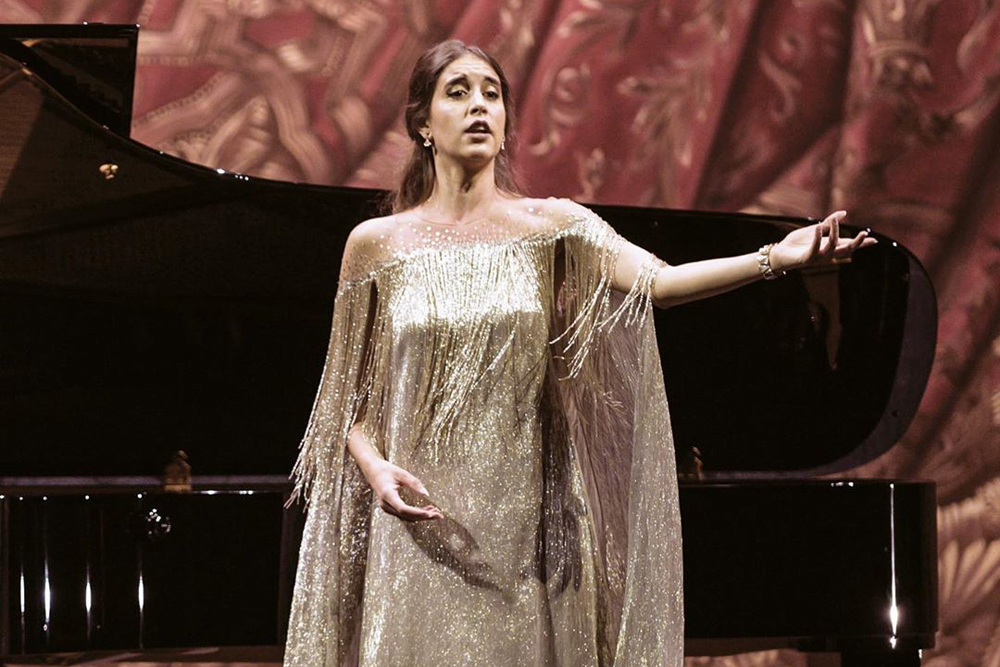 Mezzo-soprano Farrah El Dibany recently became the first Egyptian as well as Arab woman to receive the high-status Prix Lyrique 2019 de l’AROP Award. The Friends of the Paris Opera, known as AROP, honoured El Dibany with Best Upcoming Young Singer. Since its creation AROP has been on a mission to support the Paris Opera’s promising artists, and the annual Prix Lyriques go to one female and one male opera singer.

The award ceremony was held at the Palais Garnier, a 1,979-seat opera house that was built for the Paris Opera. And guests, including the Egyptian ambassador and his wife and French dignitaries, were able to appreciate El-Dibany’s soul-searching voice as she sang an extract from Carmen by French composer Georges Bizet. El Dibany is also the first female from the region to sing with the Opéra de Paris, France’s primary opera and ballet company. She has been a resident artist since 2016.

Making a Dream Come True
Alexandria-born El Dibany has loved classical and opera music since a young age due to growing up in a musical environment. By the time she was 14, she was taking lessons with renowned opera singer Nevine Alouba. Thanks to a German teacher recognising her talent, the brunette with an extraordinary vocal range, who attended the Arts Centre of the Library of Alexandria, was encouraged to travel to Germany, where she signed up at the Hanns-Eisler Academy of Music in Berlin in 2010. While in the country, she obtained another Bachelor’s degree in architecture at Berlin’s Technische Universität , plus a Master’s degree in Opera from the Berlin University of the Arts.

A Remarkable Repertoire
As well as performing at the Palais Garnier and major venues in Cairo and Alexandria, El Dibany has performed in renowned opera houses all over the world. Some of her accomplishments include singing the role of Cornelia in Handel’s Giulio Cesare, appearing as Ramiro in Mozart’s La finta giardiniera and Dido in Purcell’s Dido and Aeneas.

In 2015, El Dibany’s outstanding performance in Carmen at Berlin’s Neuköllner Oper earned her Best Young Opera Talent by Opernwelt magazine. She played the role again in Rheinsberg after winning a prize at the 2017 Kammeroper Schloss Rheinsberg Festival. Incidentally, she has also been awarded third prize at the International Giulio Perotti Singing Competition in 2013 and the Wagner Stiftung Prize in 2018.

The prima donna’s repertoire also includes the alto solo sections of Pergolesi’s Stabat Mater, Mozart’s Requiem, Rossini’s Petite Messe Solennelle and Beethoven’s Ninth Symphony. The impressive El Dibany has played the Second and Third Lady in Mozart’s Die Zauberflöte, Amastre in Handel’s Xerxes, Martha in Tchaikovsky’s Iolanta, Orfeo in Gluck’s Orfeo ed Euridice and Prince Orlofsky in Die Fledermaus by Johann Strauss too. Additionally, the chanteuse, who was chosen as the voice and face of Devialet after they joined forces with the Paris Opera, has performed the alto solo passages of David Lang’s The Little Match Girl Passion for a choreographed piece by Simon Valastro.

During her busy summer, El Dibany has two Parisian concerts where she will perform songs by Dalida, according to “Women of Egypt.”