While Fendi’s show was touching and sober, Moschino’s was over-the-top camp and fun-filled. 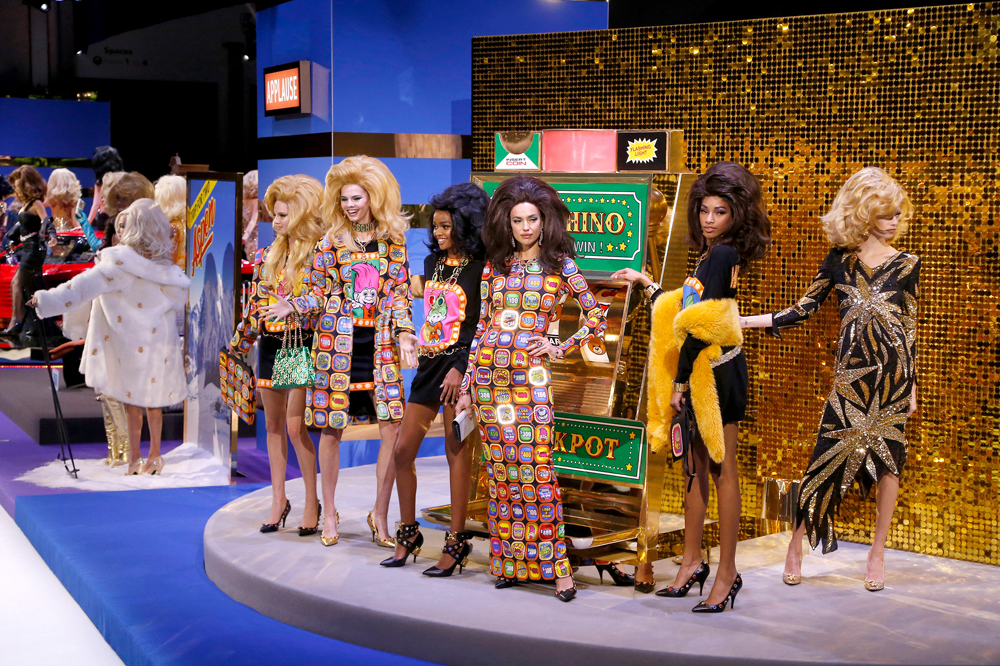 This season, Milan Fashion Week was chock-full of brilliant shows, with designers bombarding us with countless standout looks from their autumn/winter 2019 collections. Prada revived Hollywood's era of gothic romance and had Cara Delevigne making a rare runway appearance. Donatella Versace, inspired by the 70s, revealed how to go grunge the glamorous way, sending models of the moment as well as 90s heavy hitters Shalom Harlow and Stephanie Seymour down the catwalk. Plus, at Etro, different aged models, from the legendary Farida Khelfa to teenaged Cara Taylor appeared in the “Aristo-Indie” collection that mixed aristocratic touches with underground vibes. And Salvatore Ferragamo’s elegant collection treated us to some of the best outerwear, as did Moncler Genius’s colourful collaboration with model Liya Kebede.

However, two shows seemed to particularly strike a chord in our hearts. Fendi staged a poignant show that paid tribute to its longstanding Creative Director Karl Lagerfeld. And Moschino’s “bold, techni-colour escape from reality that you look forward to at the end of the day,” as Jeremy Scott described it, was a welcome reprieve against the anxiety of daily news. Here’s a closer look at the two shows:

Moschino
Moschino’s Creative Director Jeremy Scott shook up Milan Fashion Week with fun and games at his “The Price Is Right” inspired show. Top models like Bella Hadid, Jourdann Dunn, Jasmine Sanders, Joan Smalls, Irina Shayk and Kaia Gerber strutted down the runway in bouffant wigs and bright eyeshadow, with the latter walking to the theme song of the 80s game show in a dollar print ensemble. 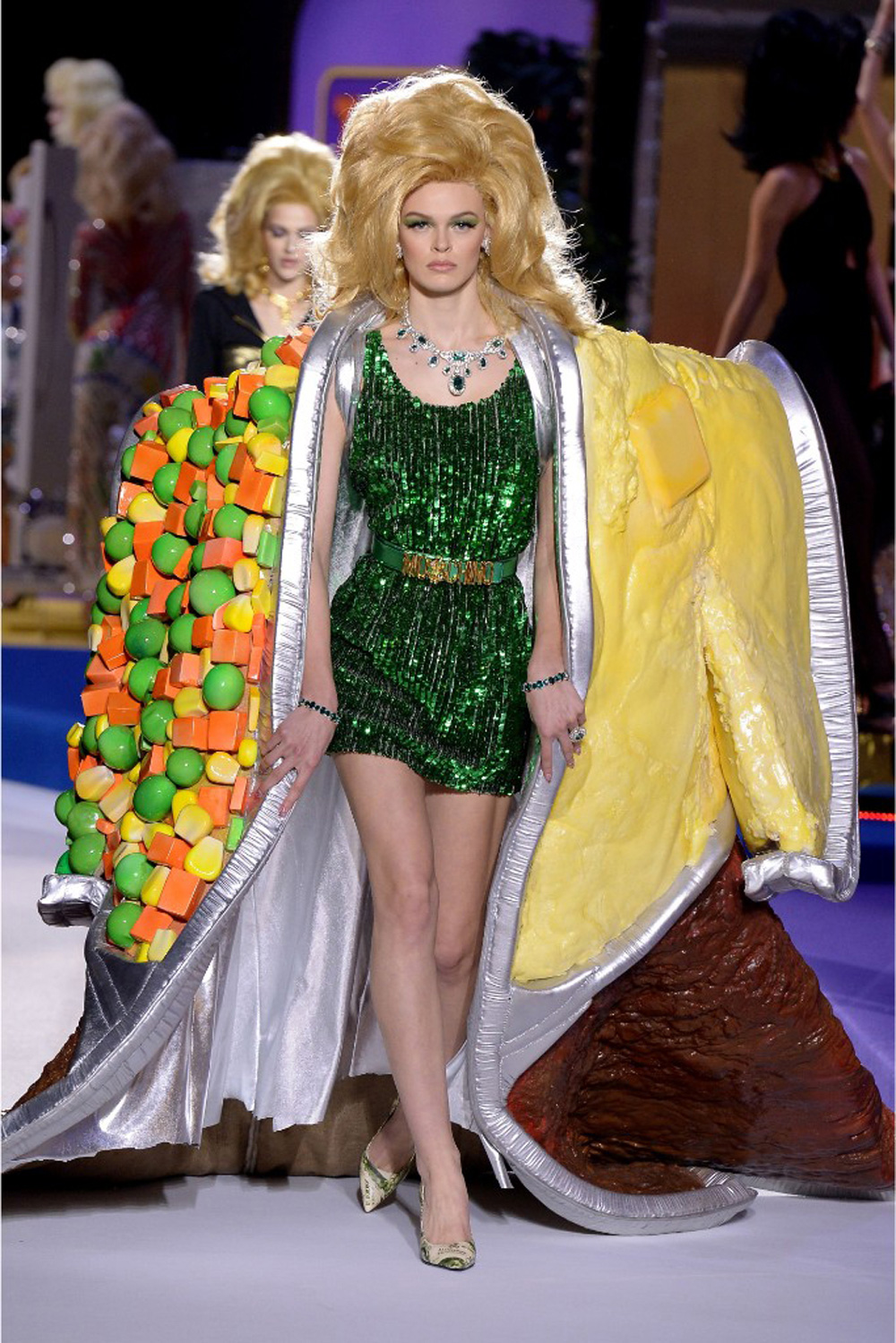 Other models turned up in blinged out dresses and minis with logos of household products, including detergent, toothpaste, while gold leather suits featured colourful gemstones. The final look was a structural kimono cape that looked like a TV dinner, while the more wearable pieces included the fur coats and cocktail dresses. When it came to accessories, bags came in the shape of a hairdryer, champagne bottle. a tube of toothpaste and even a miniature replica of a laundry machine. Pumps, meanwhile, were rhinestone-encrusted or had banknote prints and slot machine symbols. 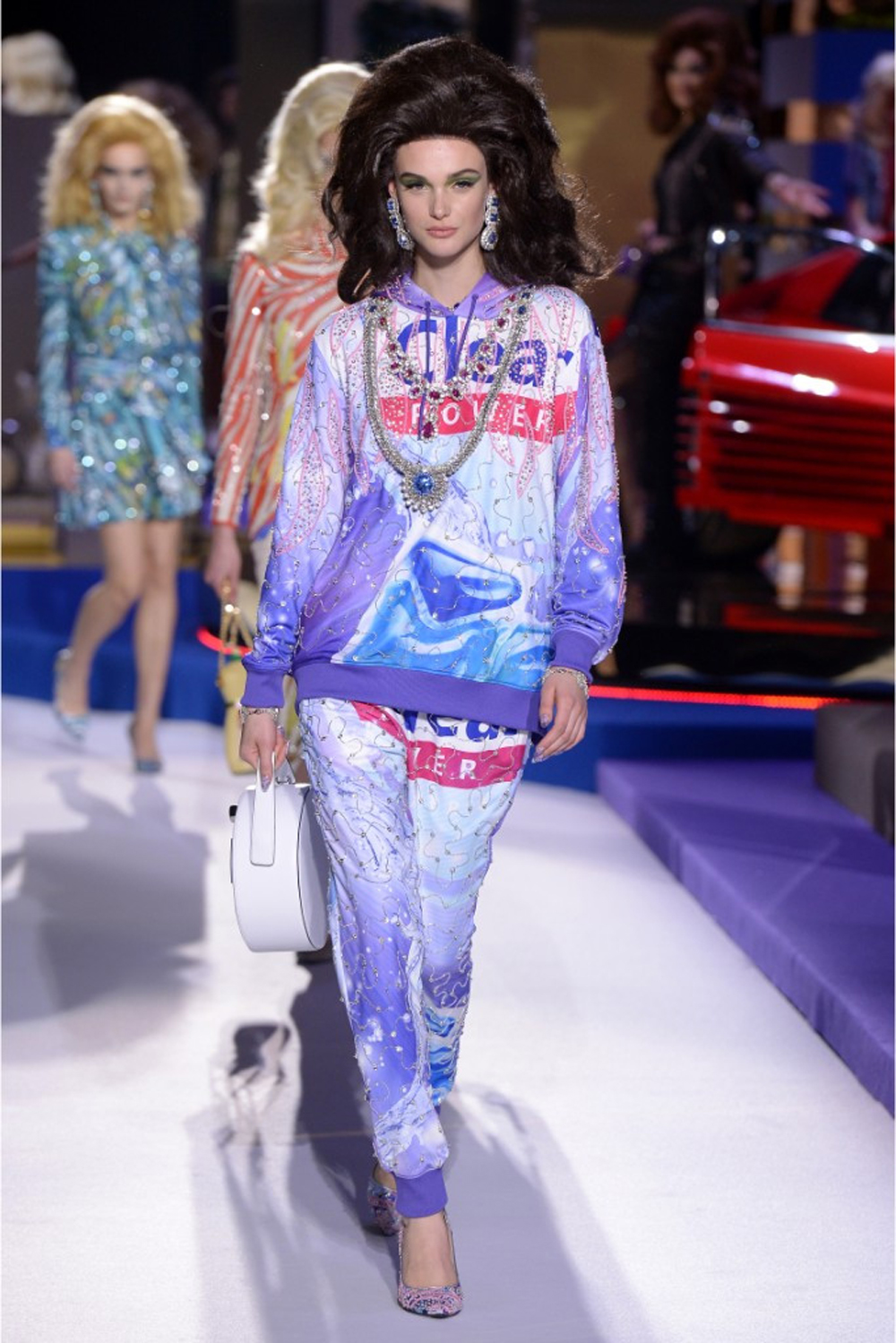 Guests were invited to guess the prices of everything from refrigerators and home gym equipment to a red Ferrari bearing Moschino plates. And the apt finale included gold rain and a delighted Scott after having won the Ferrari. 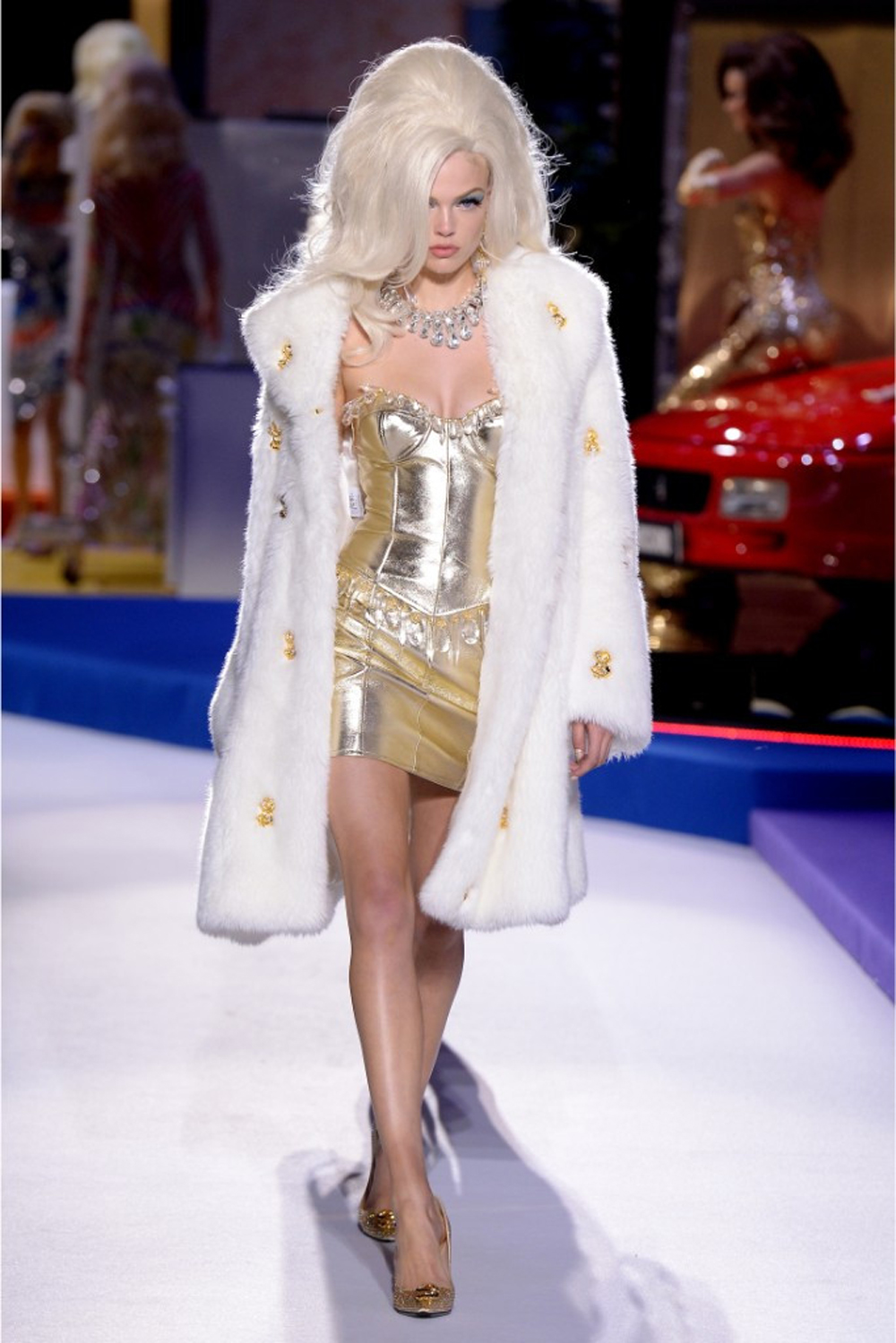 Fendi
The show had to go on at Fendi, just two days after Karl Lagerfeld died. His final collection featured his signature looks for the brand, like rigid, high Edwardian collars, riffs and a reimagined FF logo, which was designed by Lagerfeld in 1981. Sheer printed dresses, in colours like yellow, green and black, and double-breasted blazers over short, pleated skirts, patterned tights and white boots were some of the other highlights. 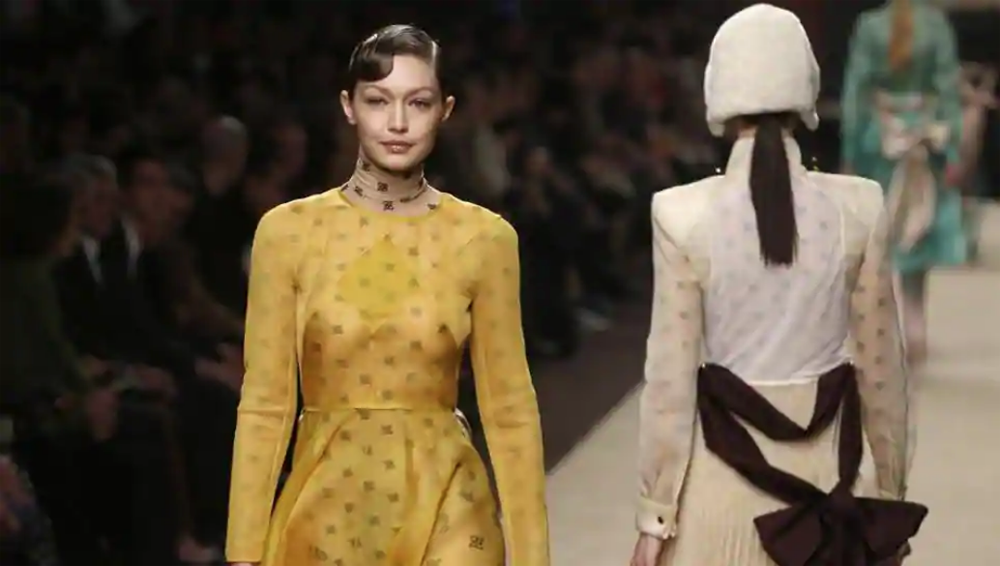 Lots of glossy furs and leathers, which the brand is known for, also appeared. Most of the tones were neutral, like pale ivory, cognac and terracotta, while there was the occasional splash of tangerine, aquamarine and brushed copper. Grace Elizabeth, Anok Yai, Adwoa Aboa, abd the first Fendi hijabi-wearing model, Ugbad Abdi, all helped show off the collection. 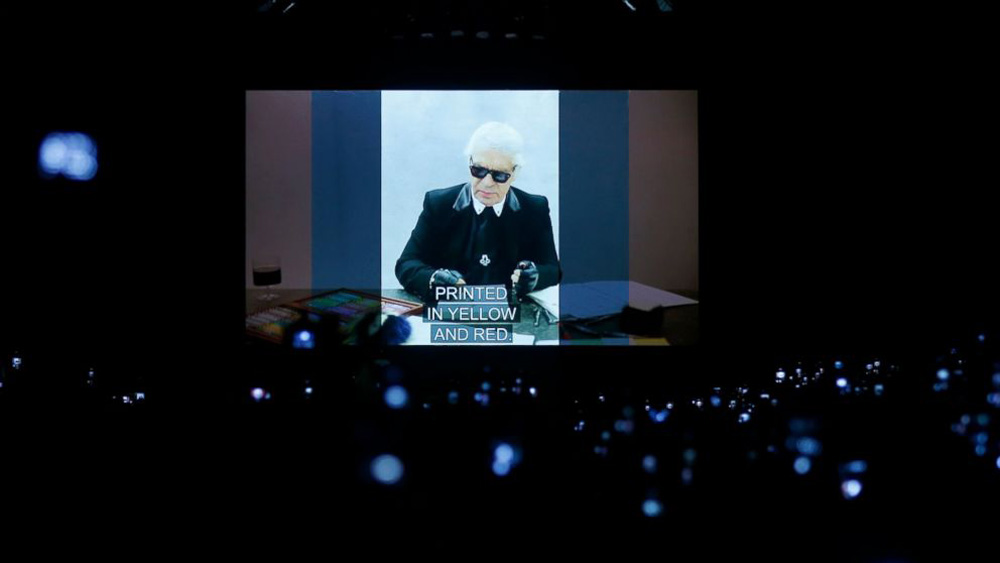 Fendi paid tribute to the designer, who had a 54-year tenure at the storied Italian house, with “Love, Karl” sketched in his own writing above the runway. Fendi’s signature F was given a heart and Lagerfeld’s signature, plus attendees found sketches of the German’s final collection as well as a moving tribute card on their seats. Gigi Hadid, who worked frequently with Lagerfeld, fought back the tears, as she closed the show in a delicate buttercup-yellow dress. And during the finale walk, other models held back tears as David Bowie's "Heroes" played. A portion of Loïc Prigent’s documentary, “Karl Lagerfeld Sketches His Life” was then played. 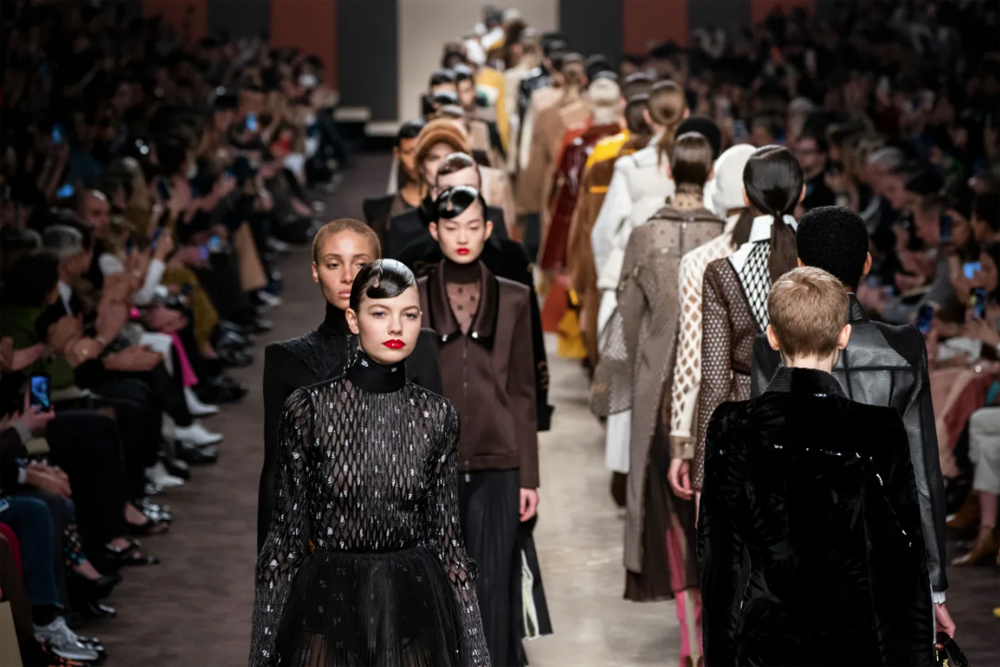