Meknes: The Moroccan City That Needs To Be on Your Bucket List 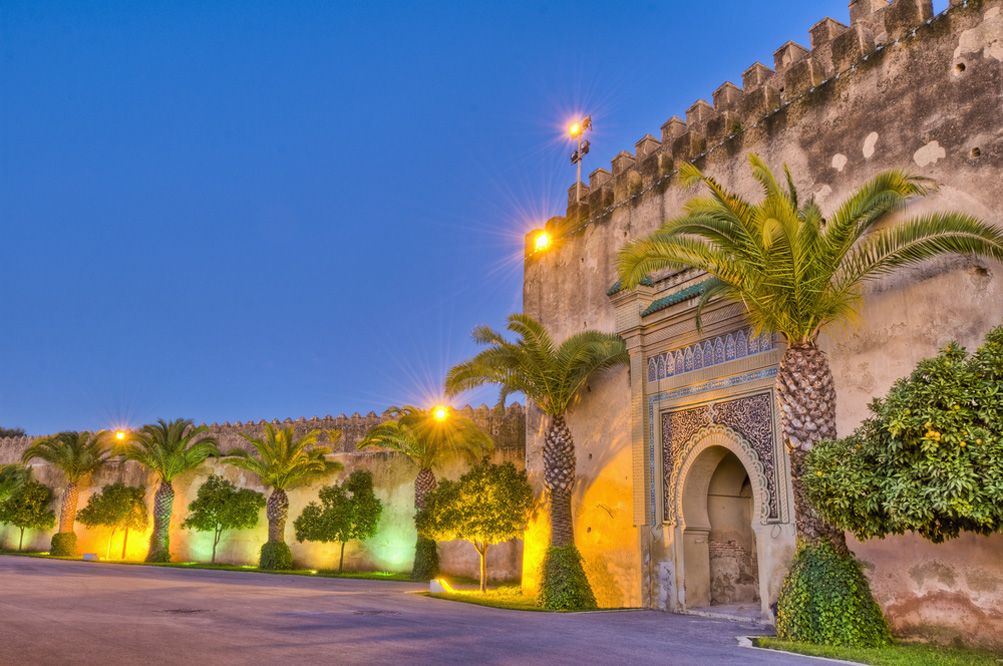 If you’re one of those people that has constant wanderlust and plans your next vacation when you’ve just returned from your last, this Moroccan city needs to be on your list.

Recently named as one of Lonely Planet’s top destinations for 2019, Meknes is the picture perfect hub of culture and history. It is situated in the central north of Morocco and was once the capital under the rule of Sultan Moulay Ismail. It is one of the four imperial cities of the North African country and is well known for its 17th century emplacements that surround it, including the Bab al-Mansour gate, and its historic, UNESCO-certified medina.

With Meknes being such an enchanting place, we’ve picked 8 must-see points in the city to make your visit a magical one. 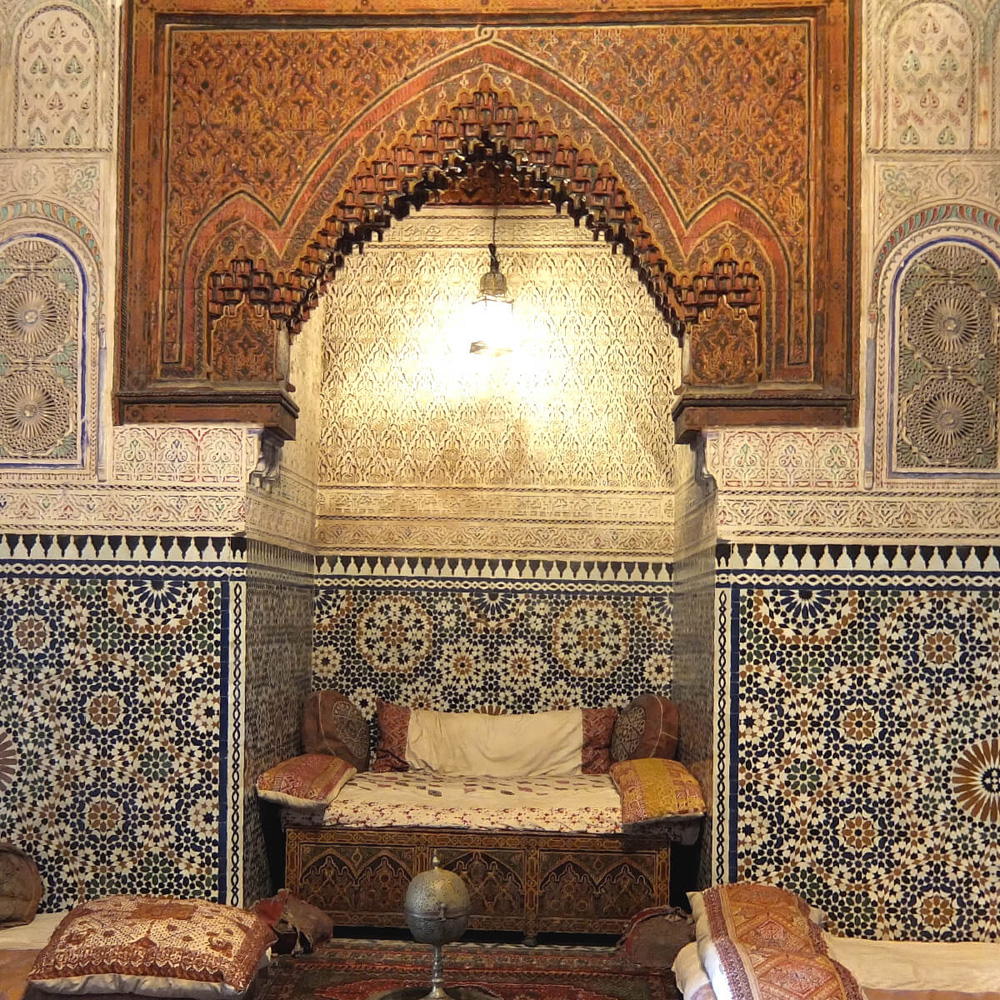 Built in 1882 as the main residence of the famous Jamai family, Dar Jamai was converted into the Museum of Moroccan Art in 1920. The museum preserves the rich traditional décor of popular interior trends that were common in 19th century Moroccan upper-class homes, like painted wood and sculpted plaster. Dar Jamai also boasts an exquisite Andalusian style garden. Devoted to the arts and crafts of the Moroccan region, and the country’s rich history, one of the rooms of the museum takes you back to the 19th century as it is set out as a typical example of a Moroccan reception room from the era, giving visitors an idea of the immense wealth of the residents of Meknes during this period. 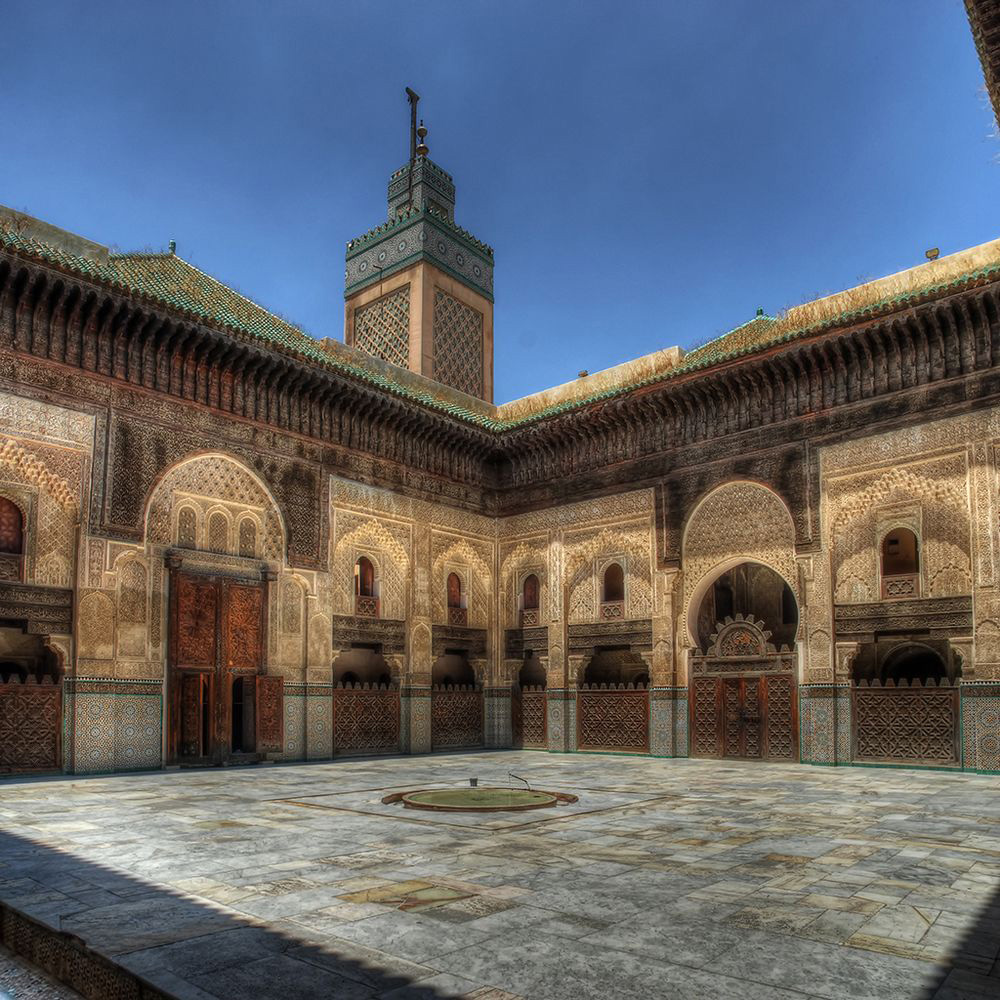 Bou Inania Medersa, otherwise known as a Madrassa – an Islamic school of learning, is hidden within the streets of the Meknes souk. The school was founded in the 14th century and has been preserved and has a lot of its zellige tile décor very much in place. The small rooms that surround the central courtyard of the school were where theology students resided whilst studying there. If you’re someone who loves a good view, it is advised you climb up to the green tiled rooftop for a stunning view across the entire Meknes Medina district and the Ville Nouvelle (new town) beyond. 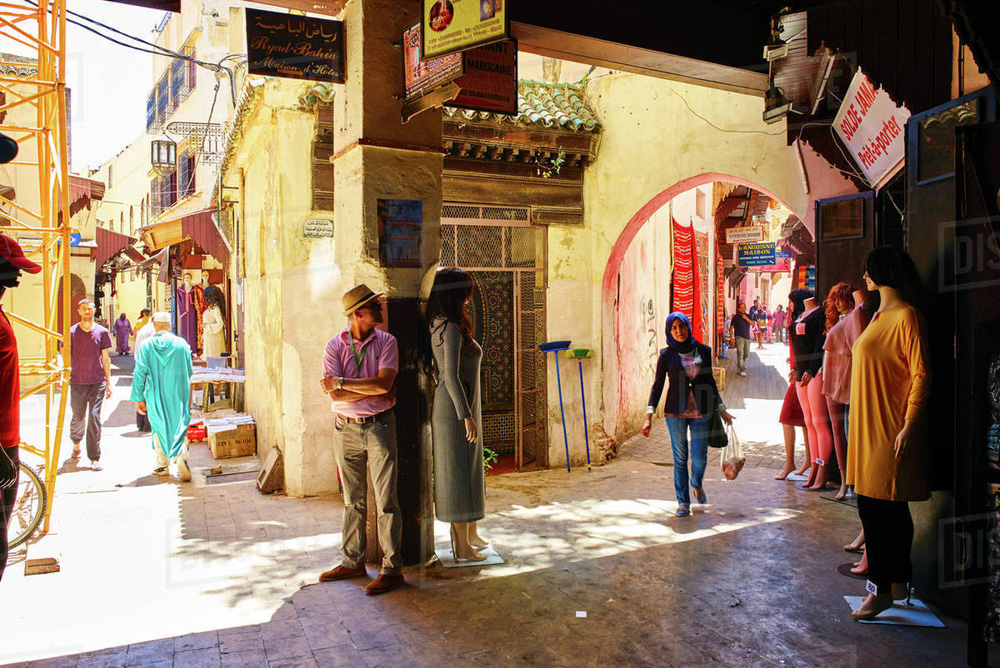 Meknes Medina is full of vibrant and buzzing local souks. If you love to bag a bargain, this medina will be your treasure trove full of textiles at Souk Nejarine, and homewares, crafts and of course those Moroccan slippers at Souk Sebbat.

The Grand Mosque, built in the 12th century, sits right at the heart of the Meknes Medina and makes navigating your way around really easy as it has a distinctive green-tiled roof. The medina was built during the reign of Sultan Moulay Ismail when he made Meknes his capital, and some of the sections of the walls that were built around it are still fully standing. 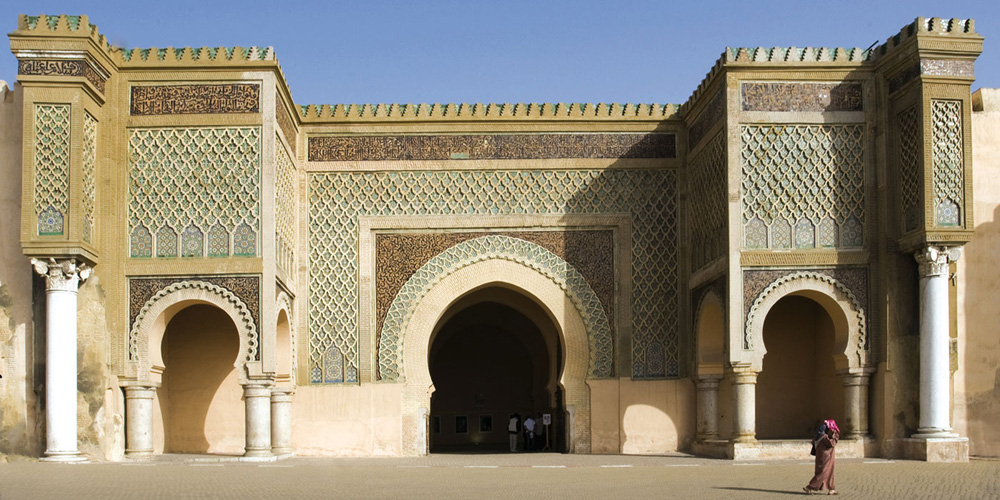 Bab Al-Mansour is the main gate between Meknes’ Medina and Imperial City districts. It is a huge and picturesque structure, which many historians have proclaimed as one of North Africa’s finest surviving gateways. The gateway was finished in 1732 and was built under the orders of Sultan Moulay Ismail. The structure itself is adorned in lavish zellige tiling and carvings. The gate is not actually open, visitors must pass through a neighbouring side gate, which allows you to fully experience the gate’s intricate beauty. 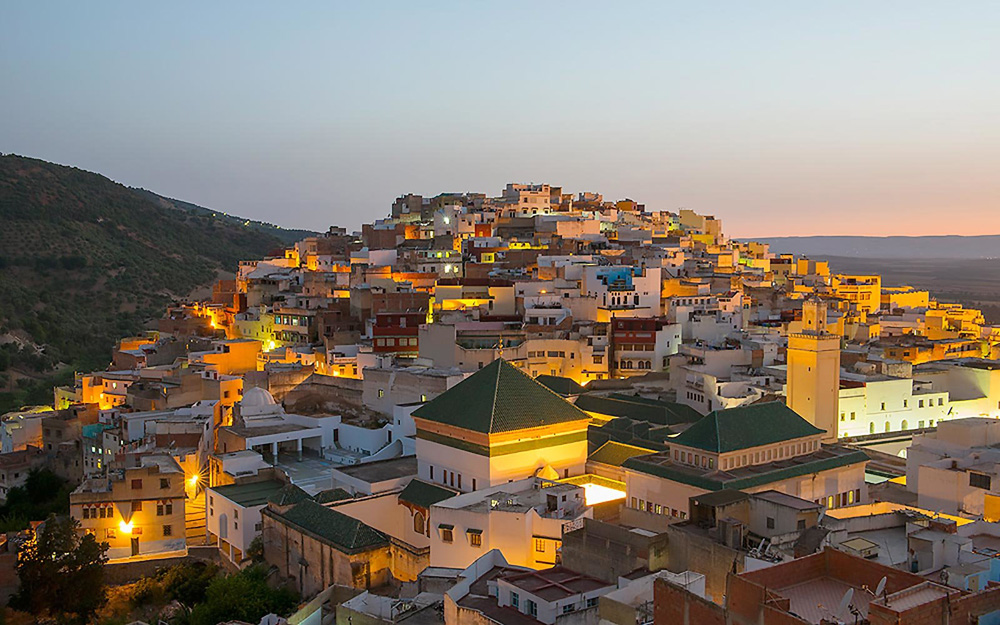 The holy city of Moulay Idriss was established in AD788 and is named after Morocco’s most worshipped saint, also known as the Prophet Muhammed’s great-great grandson, who is said to have founded the first Moroccan state. Moulay Idriss is built atop the rocky growths of the Khyber and Tazga hills, with the buildings built along the dramatic slopes. For those who are practicing Muslims, this city is seen as an important pilgrimage and a yearly religious festival in August attracts thousands of pilgrims who set up their tents around the town.

Non-Muslims cannot entire the shrines of Moulay Idriss, but can journey through the medina (old town) to the hillside paths above and get amazing rooftop views of the entire settlement. Moulay Idriss can easily be visited either on the way to or from Volubilis.

Volubilis is a major tourist attraction as it holds ancient Roman ruins. Morocco’s most famous Roman remnant, it sits on a hill with countryside below. Visitors can expect to see ruins of architecture that made up the Roman temple of Volubilis, and it’s surviving columns. Much of what was discovered there can now be found on display at Rabat's Archaeology Museum. The gorgeous and intricate floor mosaics in Volubilis' grand Roman villas have been left as they are, giving you a taste of the grandeur of wealthy Roman life. 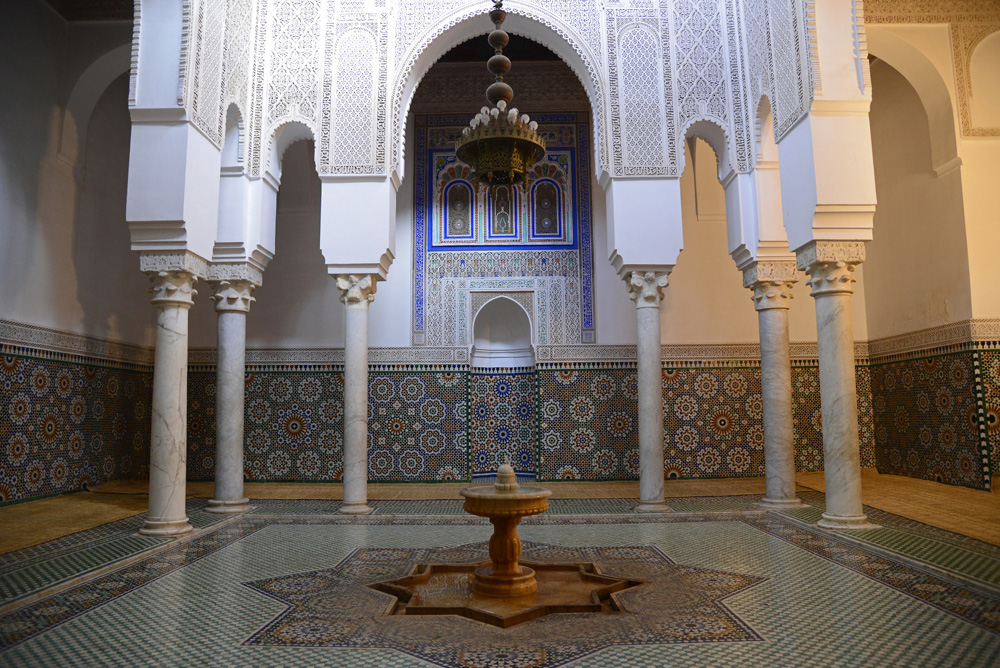 This mausoleum is a stunning home to the tomb of Sultan Moulay Ismail – the man who made Meknes the capital of his Morocco in the 17th century. With breathtaking interiors and what can only be described as the glorious exuberance of Moroccan religious decoration, this historical spot should be on your list of places to see on your travels. The mosque is not open to non-Muslim visitors, but the outer parts of the building can be visited including the tomb itself. Be sure to adhere to the rules and remove your shoes before entering, wear modest attire and don’t forget to tip the guardian. 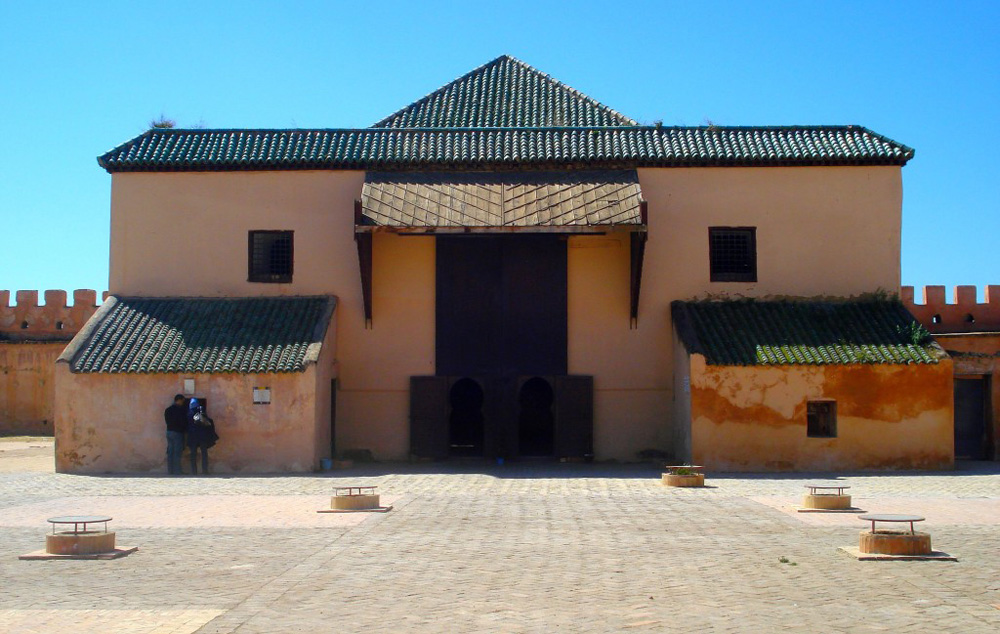 The Imperial City district is full of history with its plentiful ruins dating from the reign of Sultan Moulay Ismail. The Koubat Al Khayatine is the city's old ambassador building and today, part of the building is open to the public, with a small photography exhibit on Meknes. Just next door to the Moulay Ismail Mausoleum is the ruined 17th-century palace of Moulay Ismail known as Dar el-Kebir. A long and dusty walk from there brings you to the immense Heri es-Souani buildings, which once served as the Imperial City's storage granaries and stables and have been partially restored.