Celebrities can’t get enough of the arresting levels of sparkle and over-the-top glamour.

Former Destiny’s Child member Kelly Rowland is one of the latest additions to the continually growing list of celebrities choosing to step out in a creation by Kuwaiti designer Yousef AlJasmi. During the City of Hope Gala in California, Rowland rocked a sparkling high collared rose gold gown with a slit at the back. 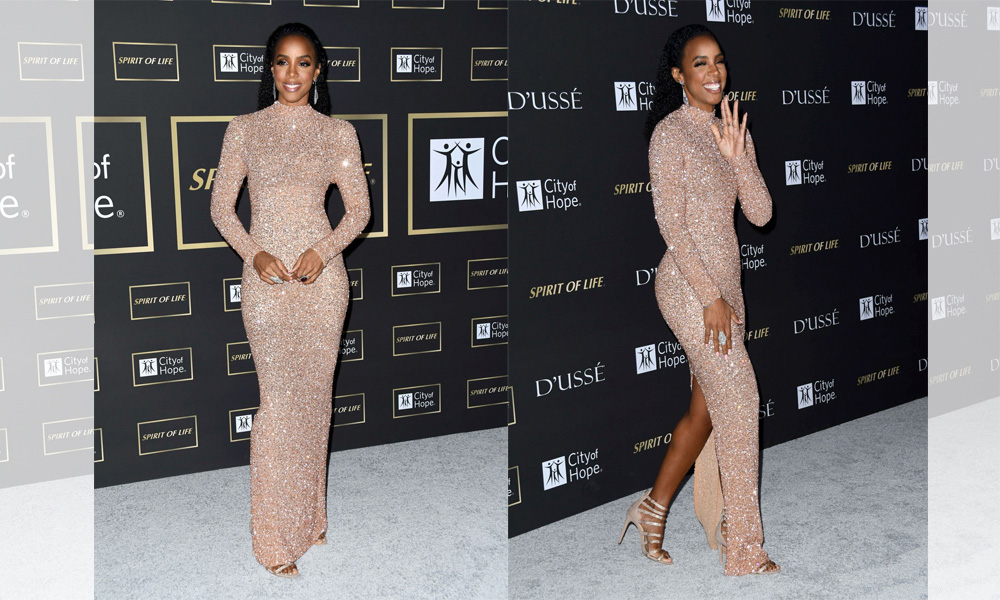 Mariah Carey, who has praised his designs, is another A-lister who recently donned something by the designer known for his romantic, hand-stitched crystal-encrusted designs during the American Music Awards.

Perhaps the first songstress and international star to wear a piece by Aljasmi, who started designing at the age of 17 and hasn’t had any formal training, was Beyoncé. She chose his Swarovski-covered black bodysuit as one of her the costumes for her “Sorry” music video. Since then, he has dressed countless renowned female figures, from Jennifer Lopez, Taylor Swift (that fringed dress, though) and Lady Gaga to Gwen Stefani, Paris Hilton and members of the Kardashian/Jenner clan.

i can’t wait to introduce the KYLIE X JORDYN @kyliecosmetics collection to you guys but before i do, i wanted to come on here and let you know just how special this collection really is to me. jordyn and i have had a true unmatchable relationship and i consider her family. she’s helped me remain ME throughout all these years and this is the first time we have collaborated on such a project! it has been so much fun and I’ll cherish the memories forever! we’ve worked hard on this and hope you love it as much as we do! reveal coming tomorrow ✨

Then of course, there’s a long list of regional stars who have been drawn to that “signature of glamour with a dash of luxury.” Shirine Abdulwahab, Nawal Al Zoghbi, Balqees Fathi, Diana Karazone and Amal Al-Awadhi are just some of the Arab celebrities who have chosen to wear one of the designer’s pieces that are all embroidered, sewn and weaved by hand in the atelier in Kuwait.

One of the reasons women love AlJasmi's creations so much is because he celebrates their shape and beauty. His figure-hugging dresses with ultra-feminine cuts make the wearer feel beautiful from inside out. All of the lines within the By Yousef Al-Jasmi label expose the power of femininity, whether it’s the ethereal gowns from his bridal wear or the playful pieces from his ready-to-wear collection. Additionally, the haute couture line, which boasts a show-stopping mix of rich textures and lavish materials, reflects class, aesthetics and get-up-and-go equally.

Always encouraged by his family, Aljasmi, who has a boutique in Kuwait City, launched his label over a decade ago. And as other years go by, we’re sure to see many more celebrities in dresses by the designer who is inspired by differing things like a Shakespeare play, a vintage postcard or city life and keeps defying trends.