These two designers believe life is short, so we should wear sequins galore and leave some sparkle everywhere we go. 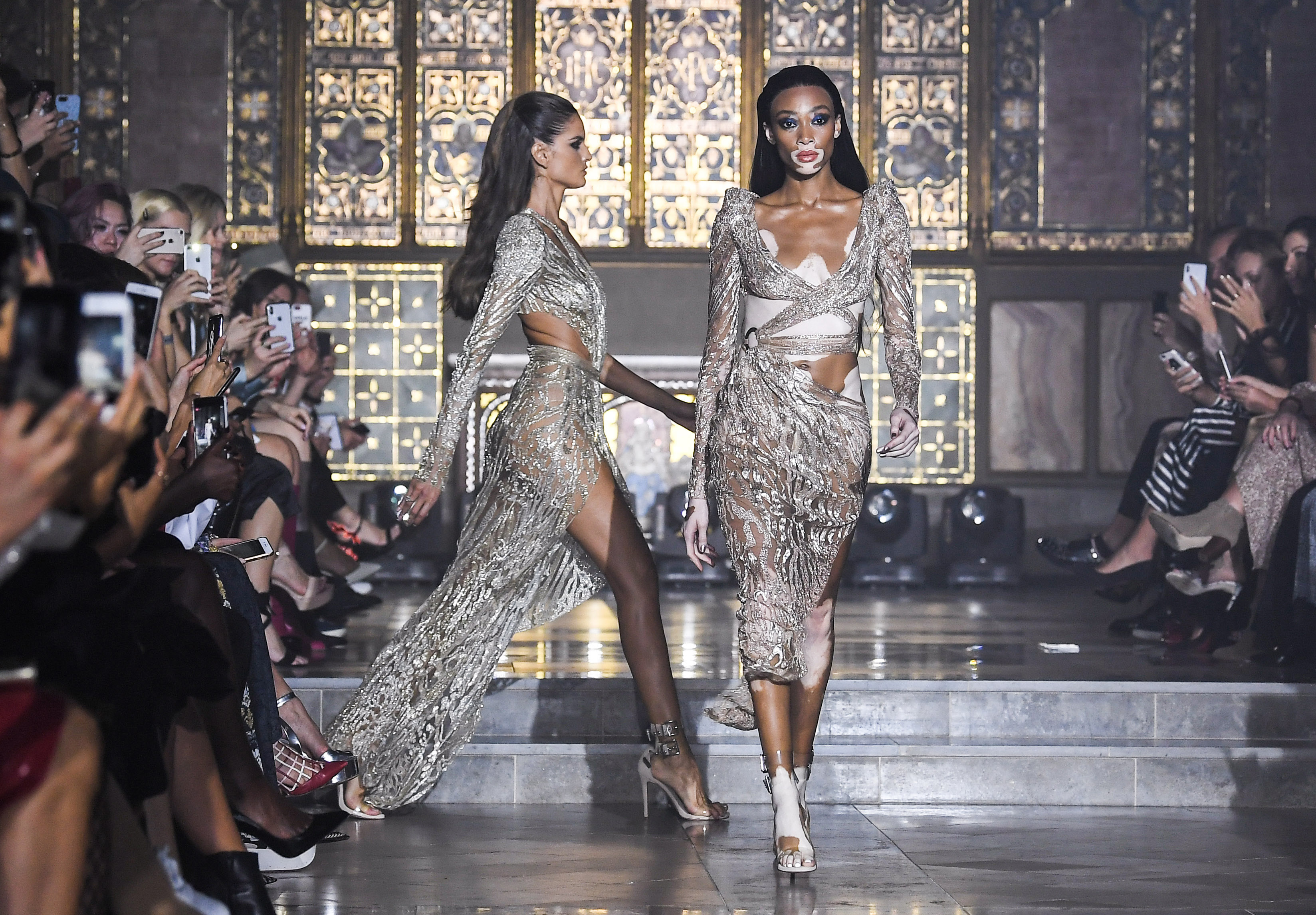 Julien Macdonald’s star-studded return
Julian Macdonald, the British designer known for using sequins, sparkles and slits in his collections, came back for London Fashion Week’s spring/summer 2019 edition after a brief hiatus. And during his show, the designer who has dressed some of the world’s most famous women showed he is still very much Britain’s king of provocative partywear. 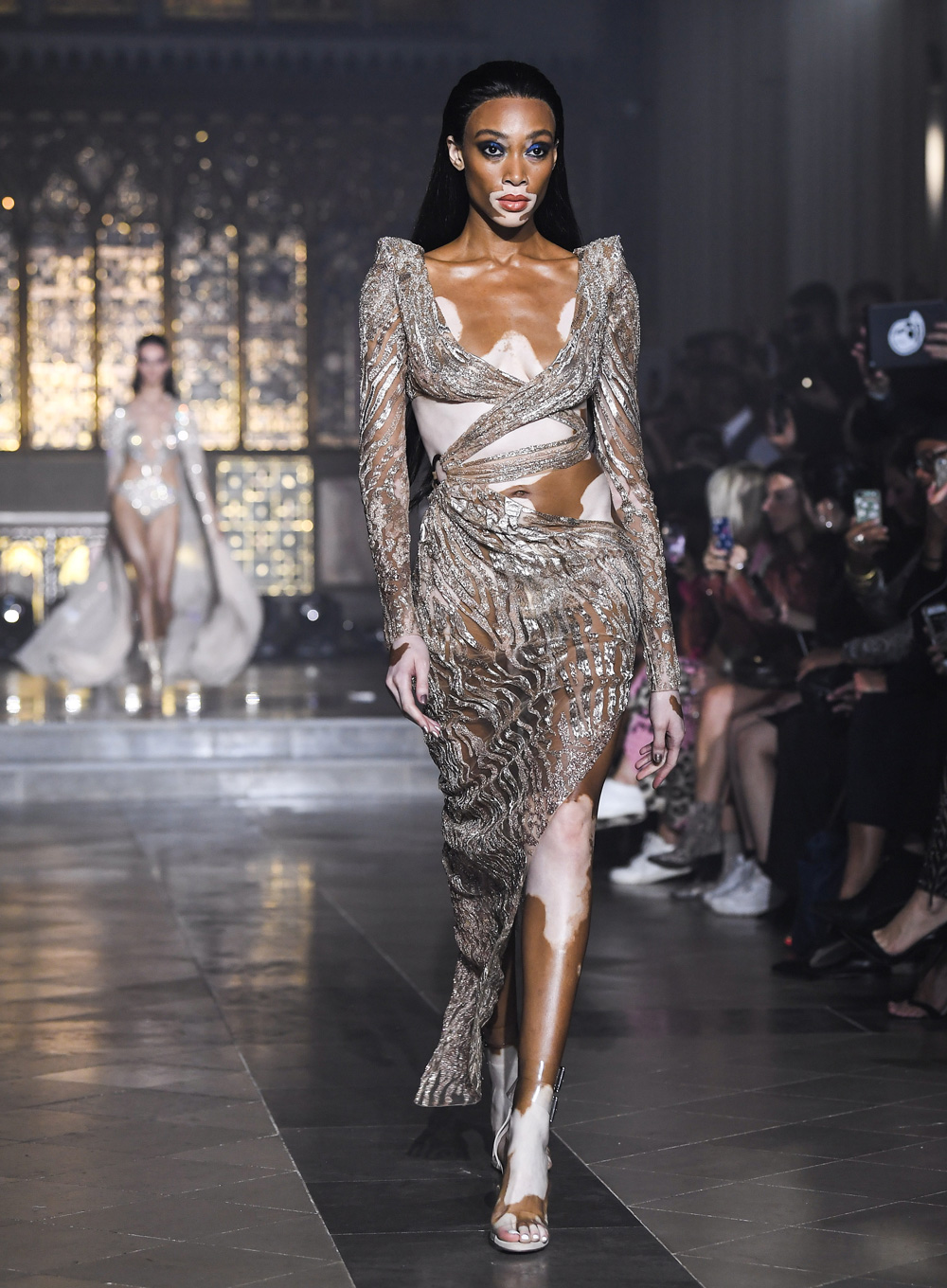 Winnie Harlow was there to show off some of Macdonald’s impressive workmanship. One of her show-stopping gowns was a champagne coloured sheer sequined dress with a plunging neckline and cut-out. 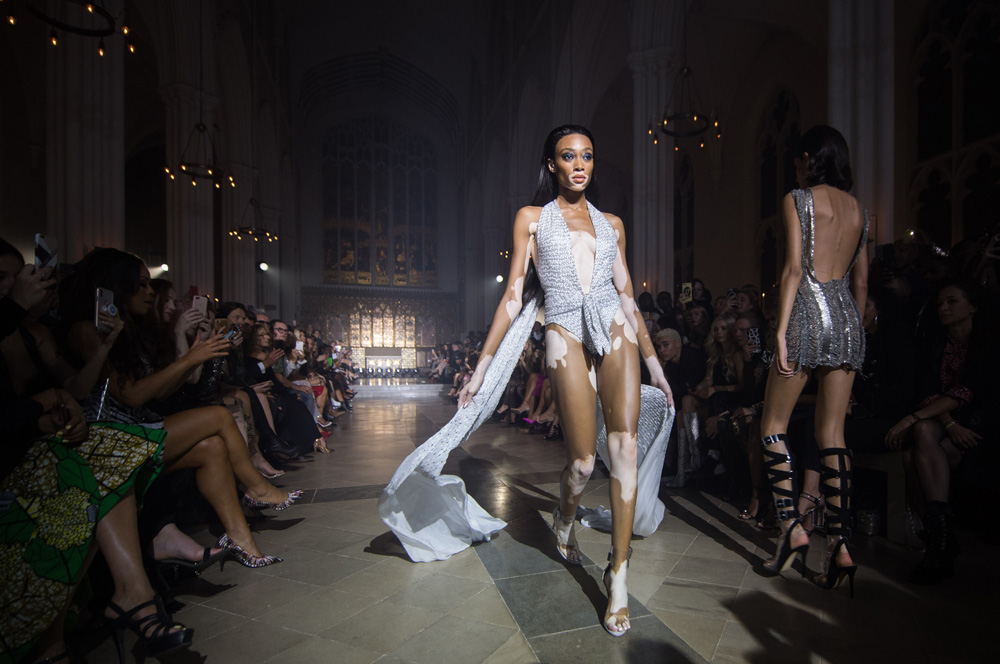 The Canadian model also wowed in a revealing silver sequined bodysuit with a matching tie around the waist and two spectacular trains attached to the back. 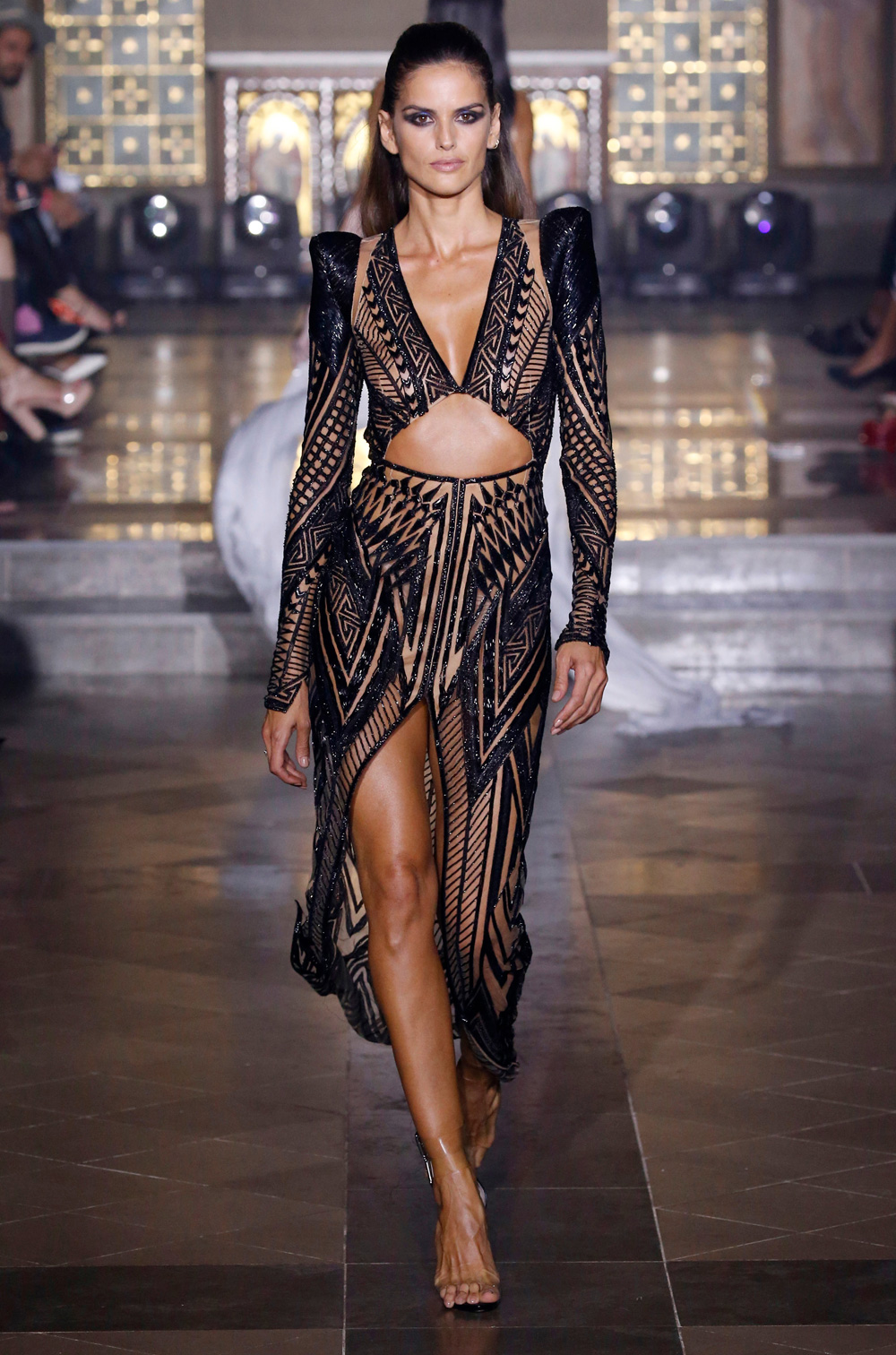 Izabel Goulart added glamour to the show and looked amazing in a black sequined dress with a cut-out and daring slit. 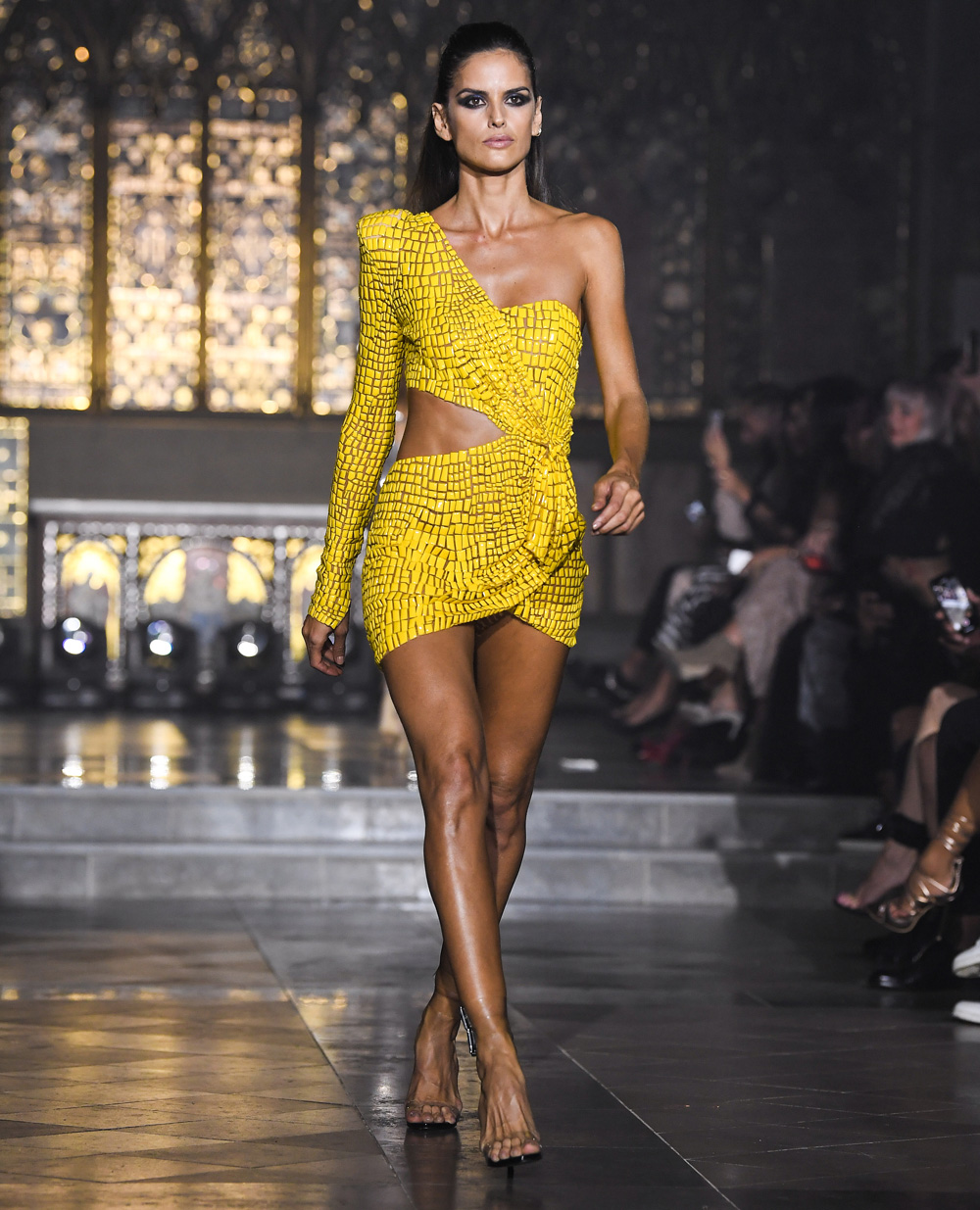 The Brazilian model also strutted in an off-the-shoulder yellow beaded and encrusted mini dress featuring yet another cut-out. 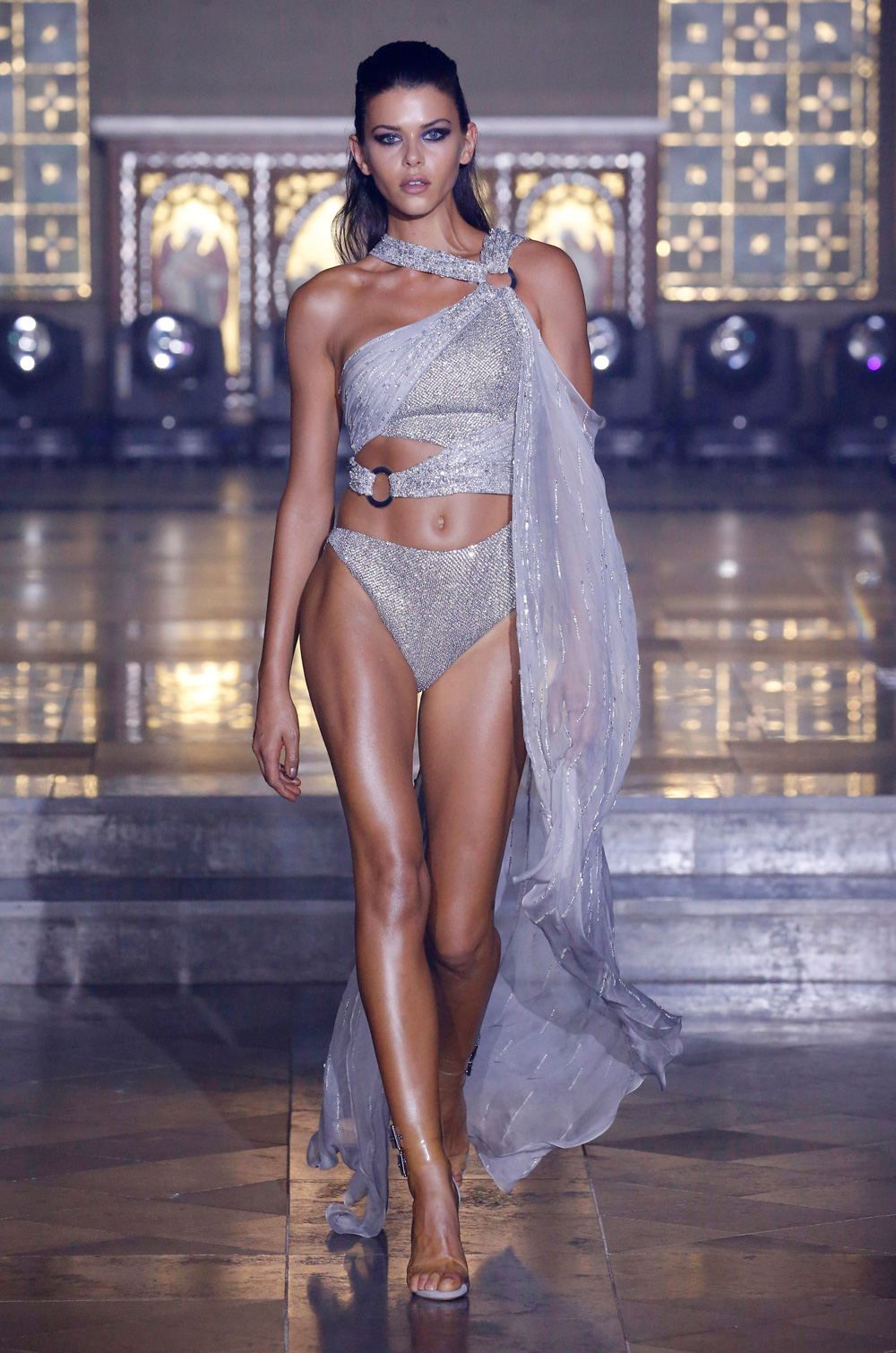 Giorgia Fowler, another model of the moment, showcased one other stunning creation by the 47-year-old designer. She looked heavenly in a grey taupe and metallic coloured off-the-shoulder bodysuit, which featured several cut-outs and sequined detailing on the left shoulder, which fell down to become a dramatic train. 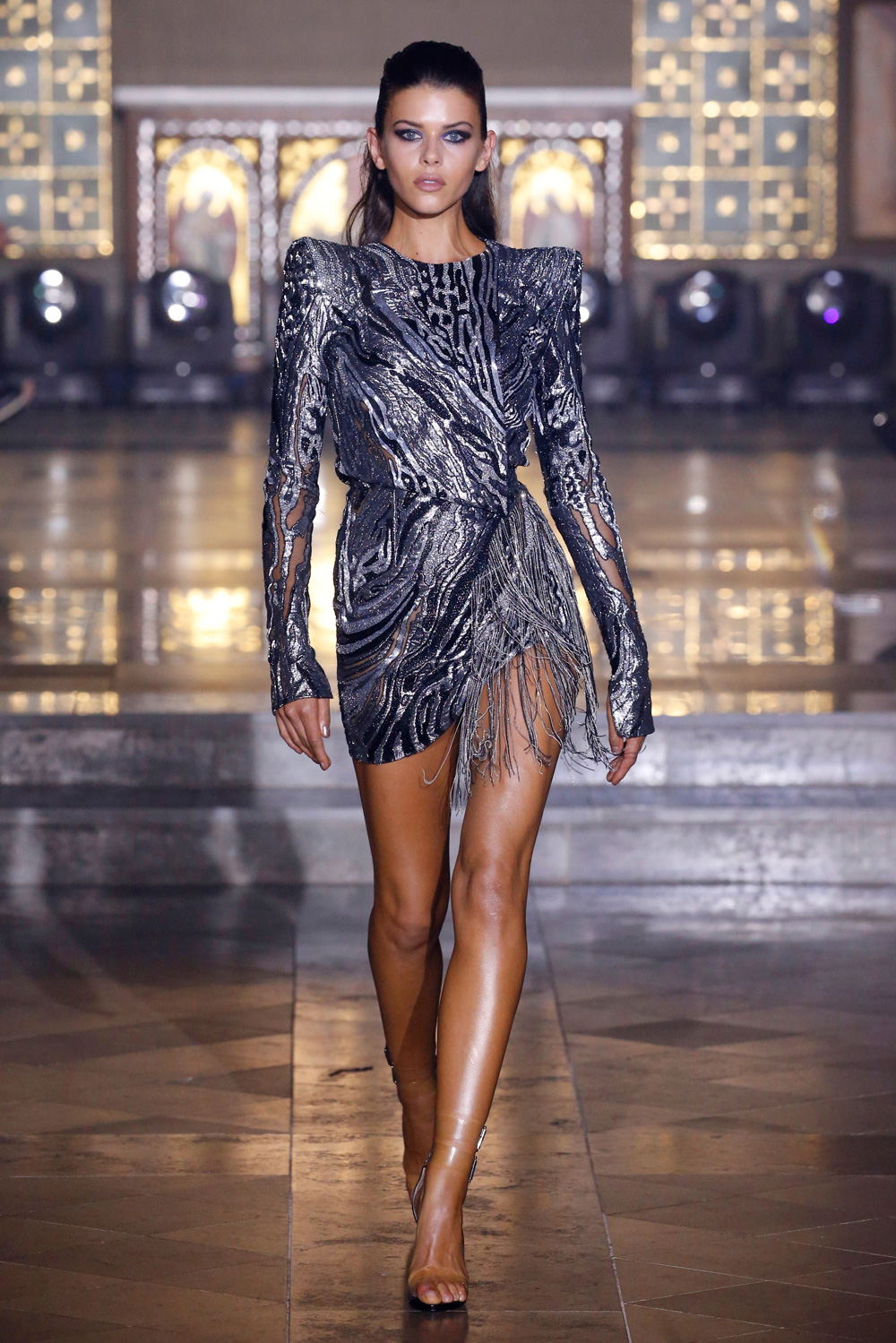 Michael Halpern’s fast-living retro collection
Since debuting his eponymous brand in 2017, Michael Halpern has been impressing the fashion crowds with his Studio 54-inspired American glamour, while his pieces usually featuring rich jewel tones, micromini lines and sequins for days.

The designer, who is collaborating with Topshop on a new 28-piece collection in November, transported us to the zeitgeist of the 1960s this time around. Inspired by his maternal grandmother, Halpern’s collection was vivid and pretty revolutionary. It was an ode to the climbing hemlines and graphic patterns favoured by the 60s woman retaliating against the establishment. 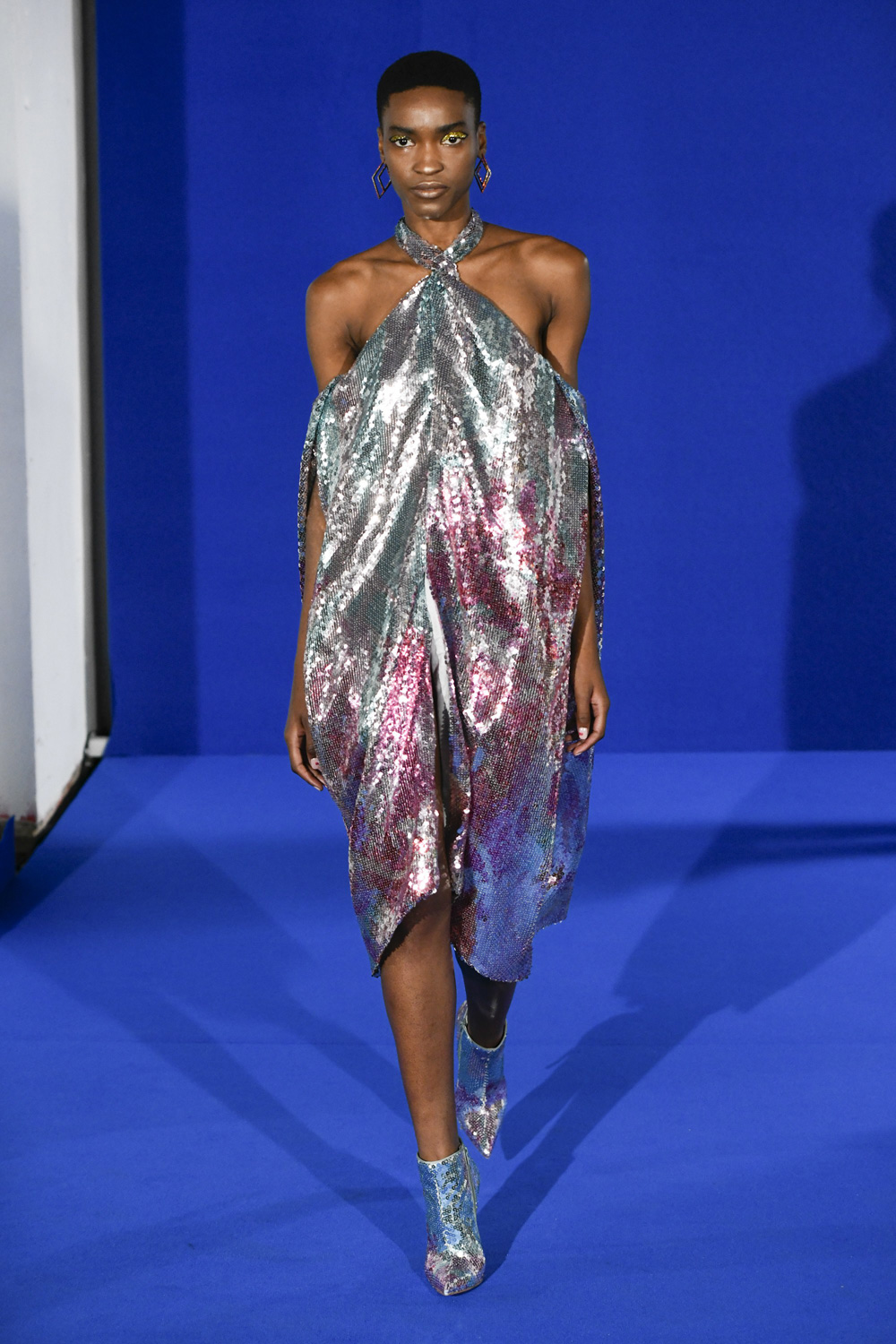 Denim-adorned dresses were stencilled in a rainforest canopy print with blue and yellow stripes, while patent leather was introduced in opalescent white and baby pink. 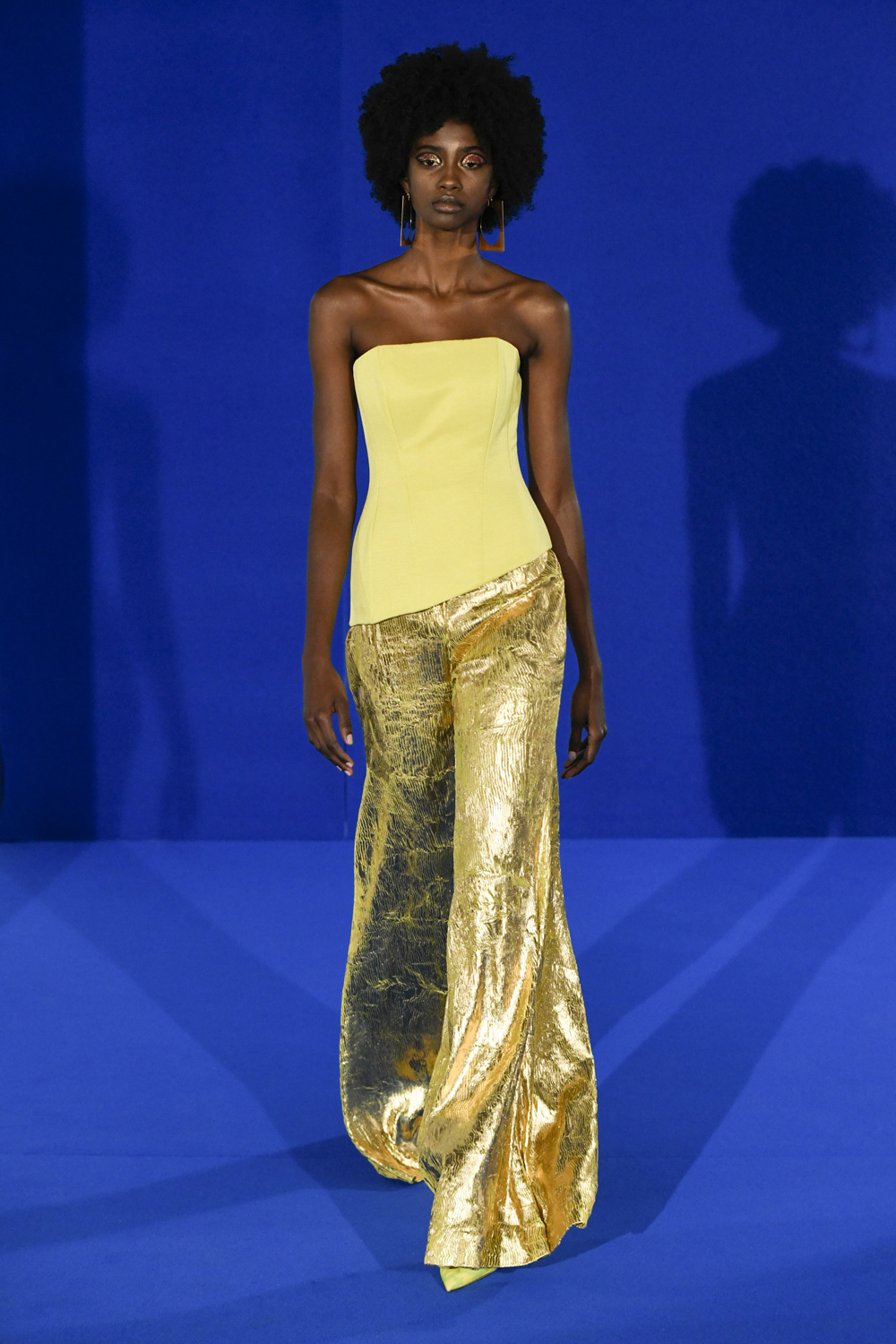 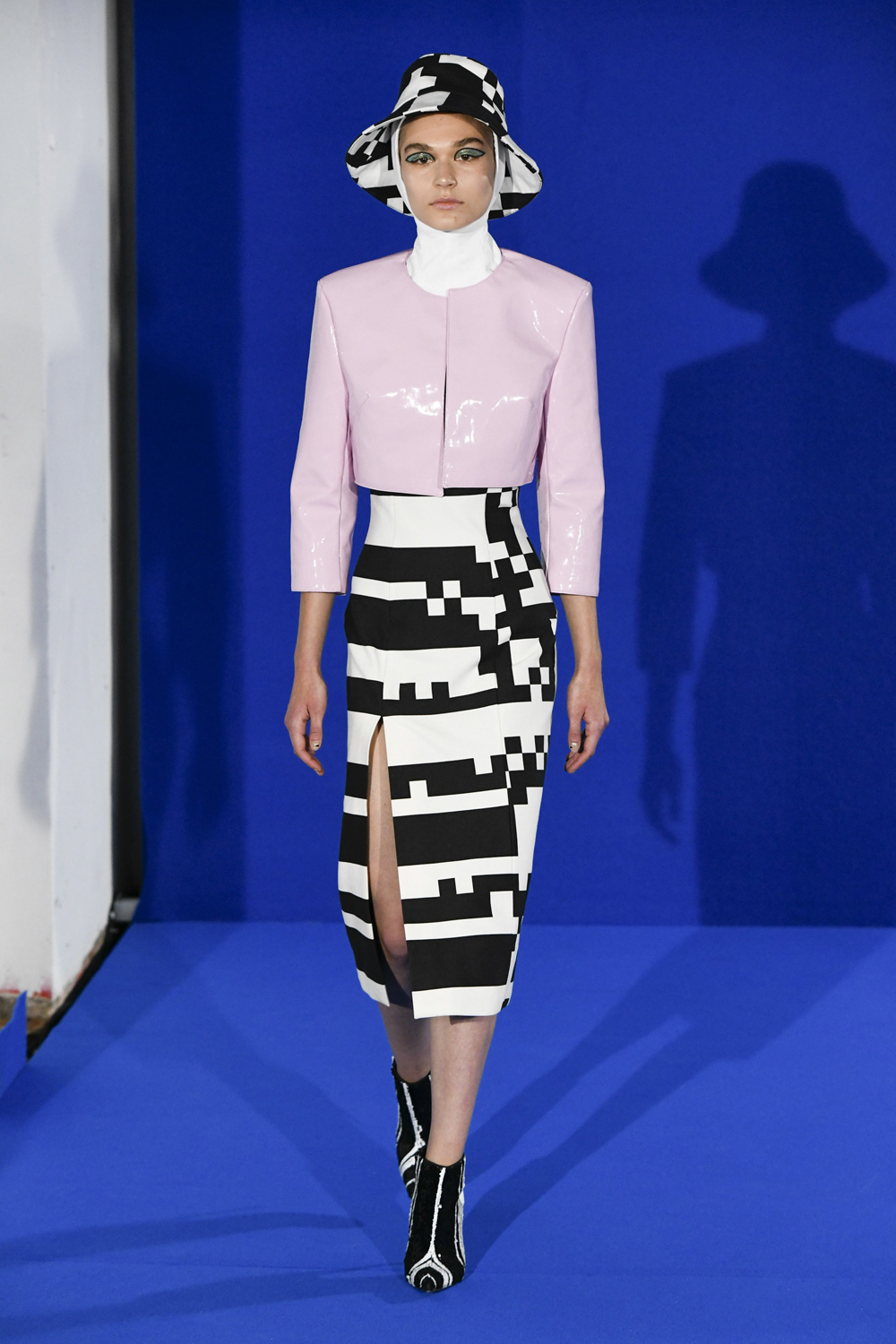 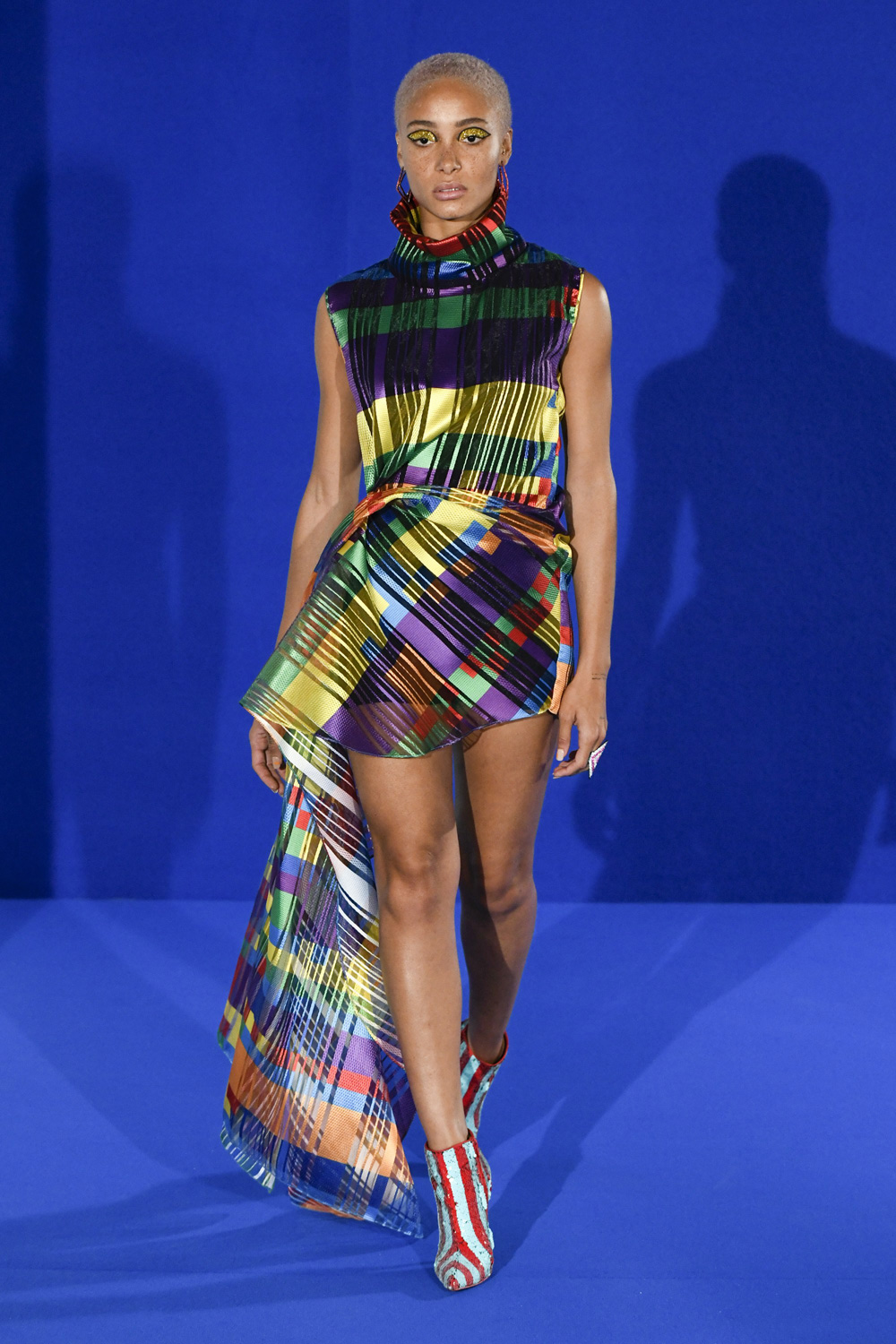 Fabrics matched Halpern’s looks and the stilettos came in a vibrant colour palette of blues, pinks and yellows. The playful ankle boots were a highlight and came adorned with multi-coloured sequins and contrasting colour block fragments. 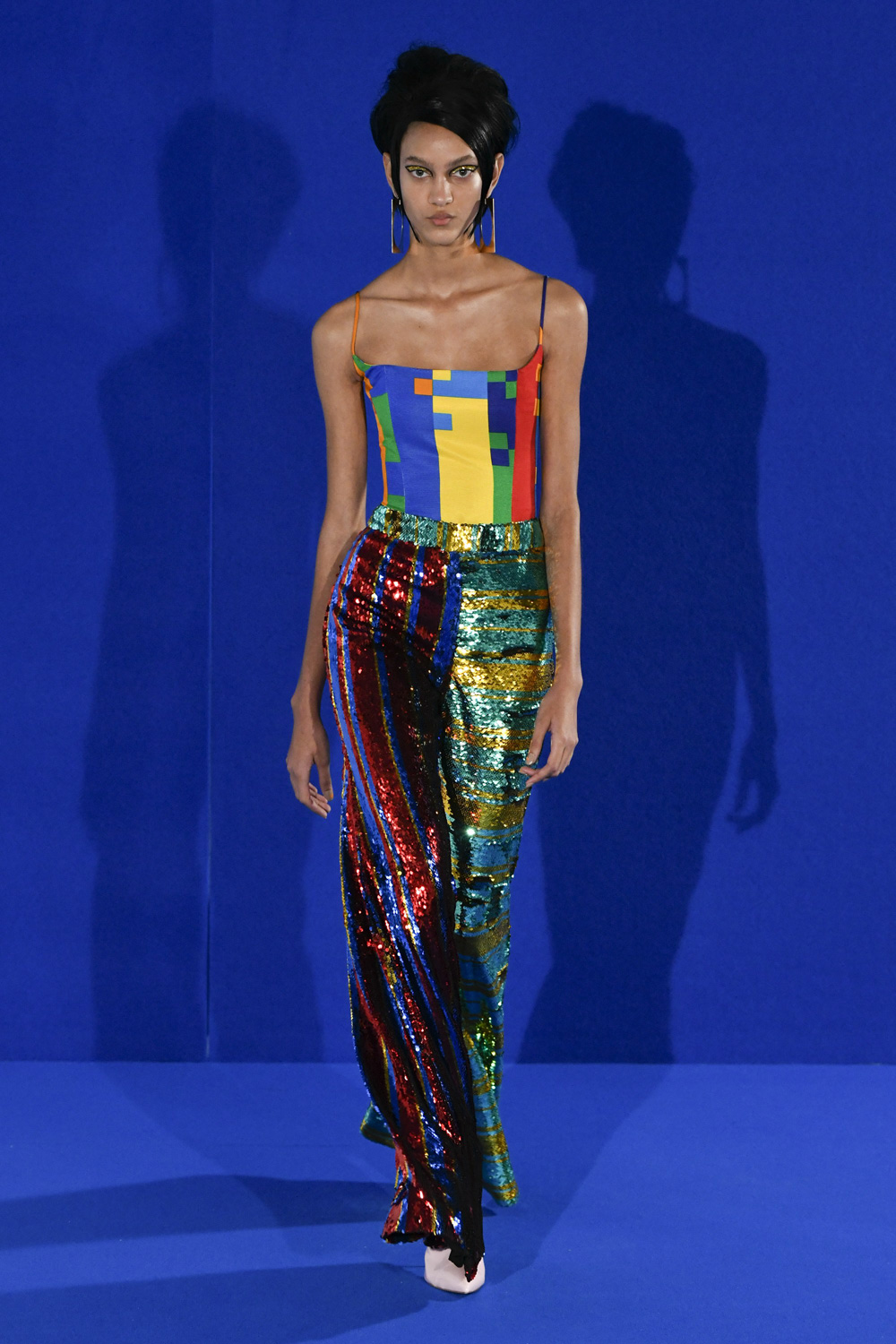