Saudi women steered their cars through busy streets for the first time on Sunday after the ban on women driving was lifted. 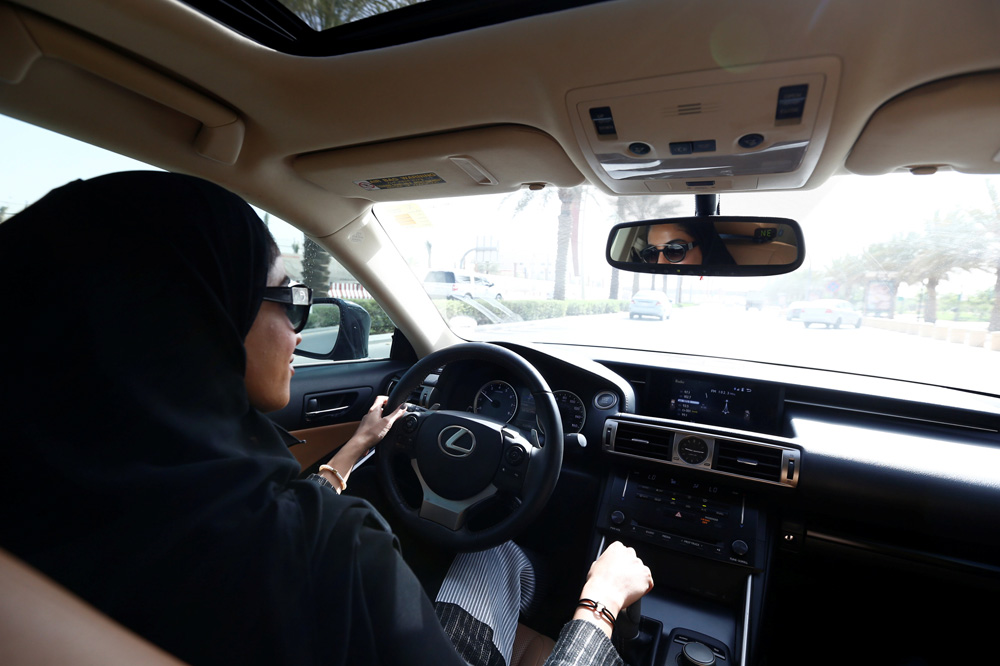 Saudi women steered their cars through busy streets for the first time on Sunday after the ban on women driving was lifted.

It's a historic moment for women who have had to rely on their husbands, fathers, brothers and drivers to run basic errands, get to work, visit friends or even drop kids off at school.

But after midnight Sunday, Saudi women finally joined women around the world in being able to get behind the wheel of a car and simply drive.

Al-Ajaji had a U.S. driver's license before obtaining a Saudi one and appeared comfortable at the wheel as she pulled up and parked. As for the male drivers on the road, "they were really supportive and cheering and smiling," she said.

In a few hours, she says she'll drive herself to work for the first time in Saudi Arabia.

With state-backed support for the move, many Saudis now say they support the decision allowing women to drive and see it as long overdue.

Tahani al-Dosemani drove her husband and two kids to the store Sunday morning, the kind of errand she'd need a man for in the past.

"As you can see here, I am heading to the supermarket with my family," she said." I am depending on myself. All the family shopping needs, and going to school and everything. All these things I can now do by myself."

Not all women are driving at once, though. The overwhelming majority of women in Saudi Arabia still don't have licenses. Many haven't had a chance to take the gender-segregated driving courses that were first offered to women only three months ago. There's also a waiting list of several months for the classes on offer in major cities. And the classes can be costly, running several hundred dollars.

Other women already own cars driven by chauffeurs and are in no rush to drive themselves. In many cases, women say they'll wait before rushing to drive to see how the situation on the streets pans out and how male drivers react.

"I will get my driver's license, but I won't drive because I have a driver. I am going to leave it for an emergency. It is one of my rights and I will keep it in my purse," said 60-year-old Lulwa al-Fireiji.

While some still quietly oppose the change, there are men openly embracing it.

"I see that this decision will make women equal to men and this will show us that women are capable of doing anything a man can do," said Fawaz al-Harbi. "I am very supportive and in fact I have been waiting for this decision so that my mother, my sisters will drive." Aya Batrawy | AP 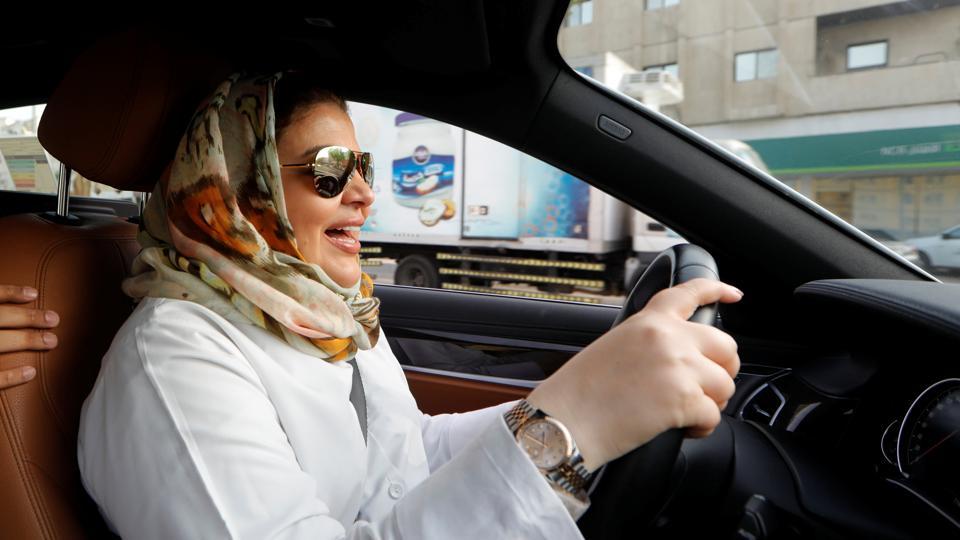 ‘I don’t need to be dependent on anyone.’ - Samira al-Ghamdi, a practicing psychologist, reacts as she drives to work in Jeddah, Saudi Arabia (Zohra Bensemra, Reuters). 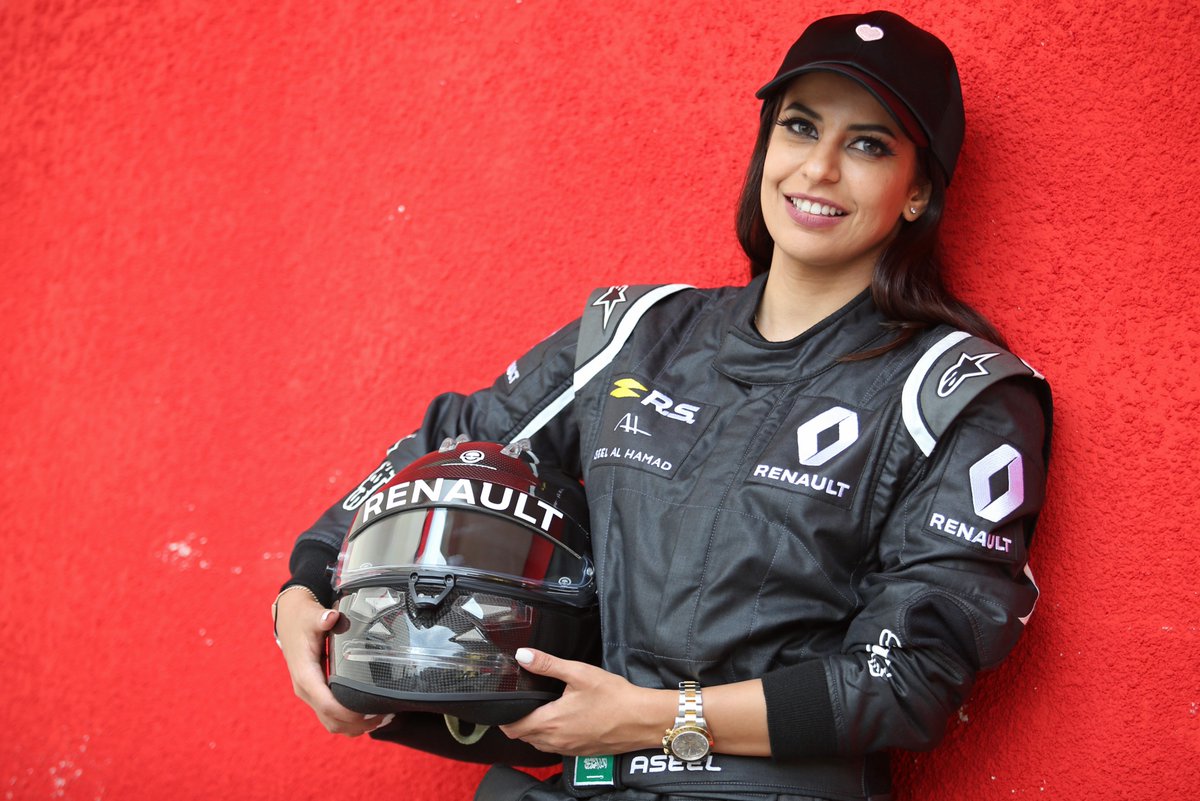 On the same day that women celebrated being allowed to drive on the roads of Saudi Arabia, Aseel Al-Hamad, the first female member of her national motorsport federation, took the wheel of the same car in which Kimi Raikkonen won the 2012 Abu Dhabi Grand Prix.

She was part of a Renault 'passion parade' hours ahead of the first French Grand Prix in a decade and the first to be held at the Le Castellet circuit for 28 years.

Aseel, who is a member of the FIA Women in Motorsport Commission, is a keen driver and motor sport enthusiast who took part in a training day on June 5 at the circuit.

"I have loved racing and motorsport from a very young age and to drive a Formula One car goes even beyond my dreams and what I thought was possible.

"It is a genuine honour to drive in front of the crowds at the team's home race in France.

"I hope doing so on the day when women can drive on the roads in the Kingdom of Saudi Arabia shows what you can do if you have the passion and the spirit to dream."

Aseel is responsible for creation of strategies to promote the education and training of women in motorsport in Saudi Arabia. (Source: AFP) 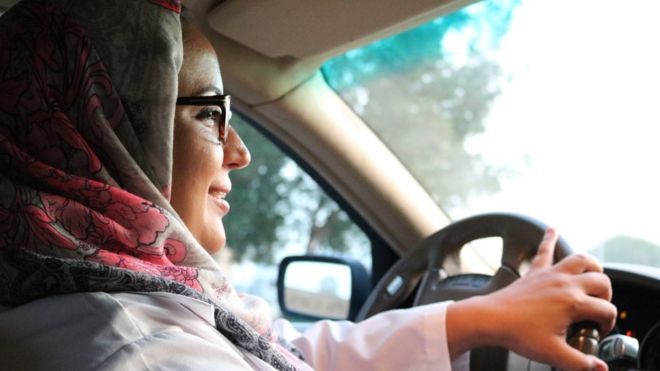 "I woke up earlier than usual today. I was so excited that I couldn't sleep. Today I'm driving to work." Roa Altaweli on her first drive to work in Jeddah, Saudi Arabia. (As told to Lulwah Shalhoub) 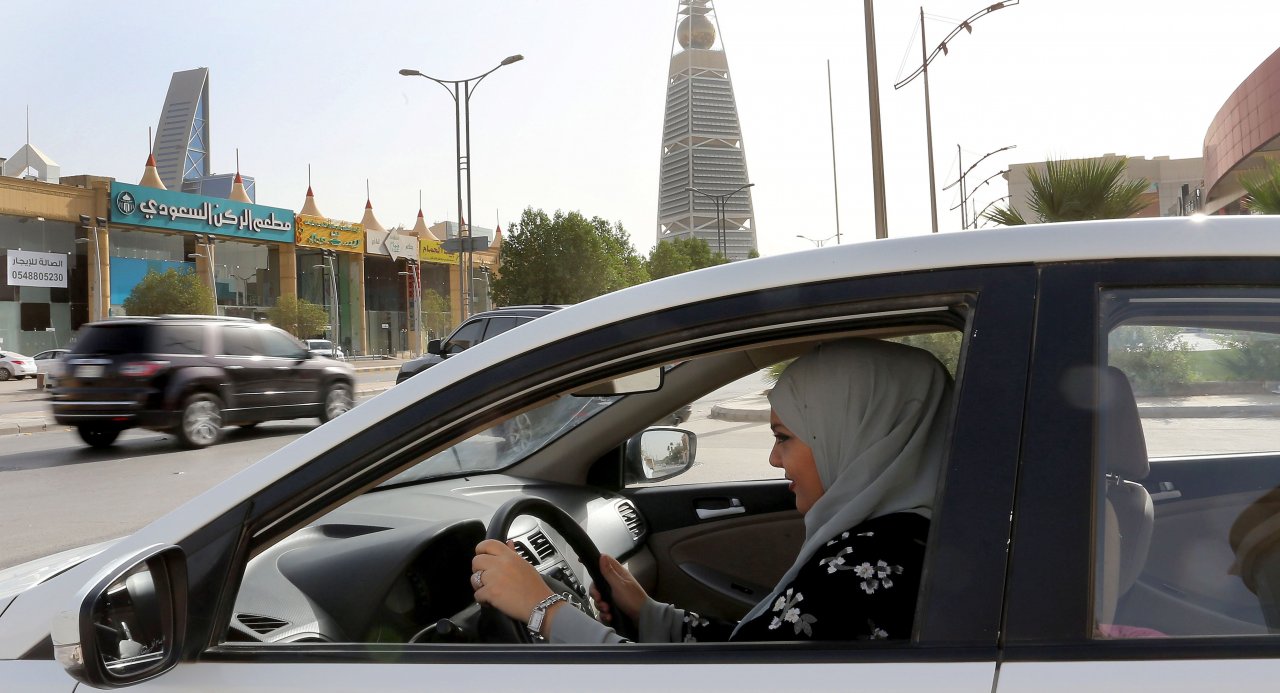 Dina Yousef, 30, drives for the first time through the streets of the capital city Riyadh, Saudi Arabia, in the early morning hours of 24 June 2018 when the royal decree lifted the ban on women driving a car in Saudi Arabia. (RexFeatures) 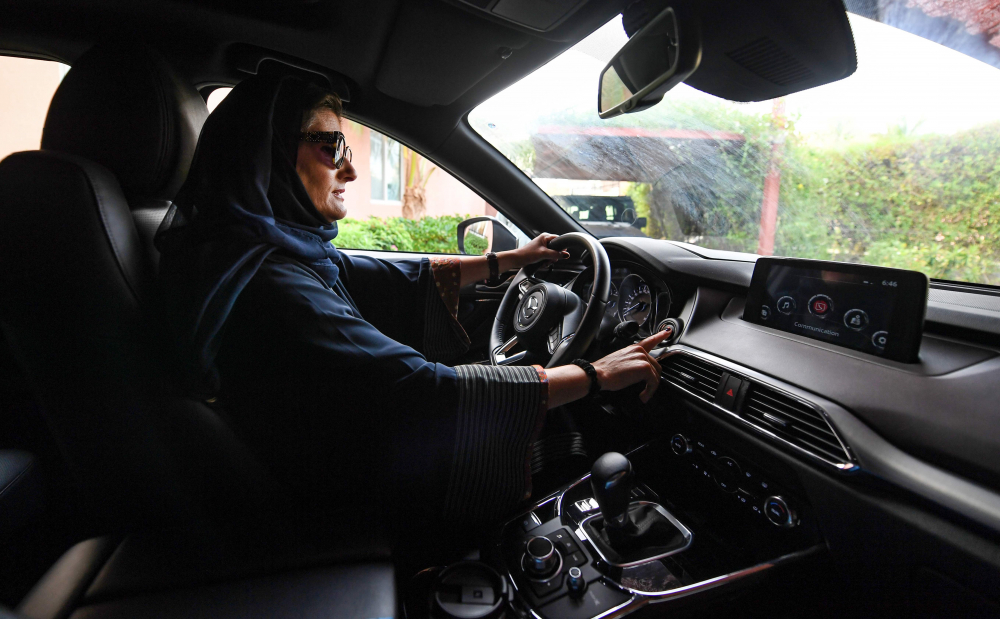 Proud Saudi husband shares photo and footage of wife driving him to work and melts Twitter's heart in the process.

Saudi Women Take the Wheel ... my wife driving me to work for the first time ...#Saudi_women_driving pic.twitter.com/m1mwff8X5J

This lifted the Saudi exchange, which outperformed other regional markets, and which was still riding the wave of MSCI's announcement last week that it would add the kingdom's stock market to its emerging markets benchmark.

The Saudi index rose 1.8 percent on Sunday, with gains spread across the insurance, banking and petrochemical sectors.

Women in Saudi Arabia took to the roads early on Sunday, celebrating the end of the world's last ban on female drivers. The decision to lift the ban in the kingdom is expected to boost the economy, with industries from car sales to insurance set to reap returns.

Saudi Investment Bank gained 0.4 percent after announcing on Sunday that a subsidiary of JPMorgan Chase & Co agreed to sell its minority stake in the bank for 759.3 million riyals ($203 million).

Outside of Saudi, Gulf markets posted minor gains. In Dubai, where the index was flat, Air Arabia was unchanged. Shares in the airline have declined by more than 10 percent since early last week, when the company said it had hired experts to protect its business interests in private equity firm Abraaj, which has filed for provisional liquidation.

Air Arabia subsequently said it has an exposure of more than $300 million to the embattled buyout firm.

In Abu Dhabi, Dana Gas jumped 0.9 percent after its shareholders approved last week the issuance of a new sukuk to replace an existing sukuk issued in 2013. The shareholders also approved the dismissal of sukuk-related litigation, marking the end of a protracted legal battle between the firm and its creditors. 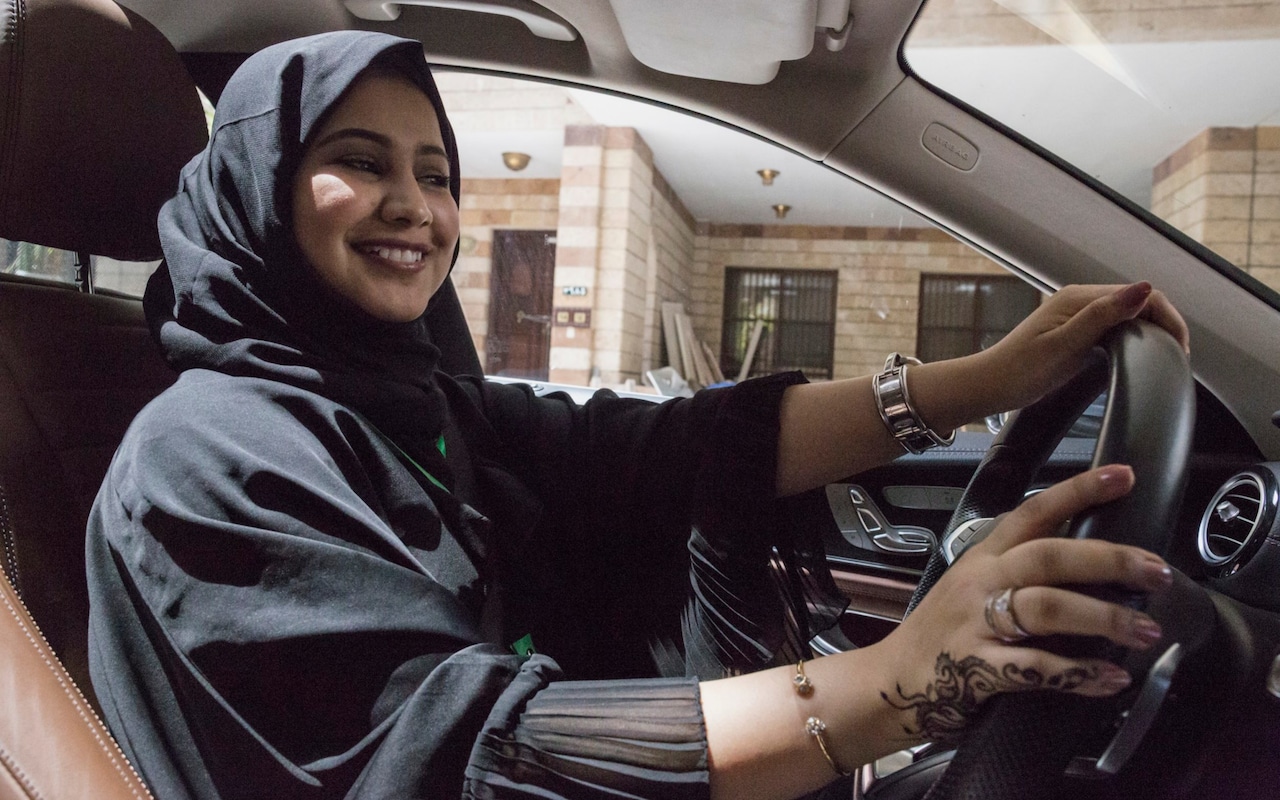 Careem 'Captinah' Fadya Basmer, 23, takes a drive in Jeddah on the first day women are legally allowed to drive in Saudi Arabia. “Being a taxi driver for me is about inspiring girls to do what men do,” she says. “Nothing less.” (Credit: Sam Tarling for The Telegraph). 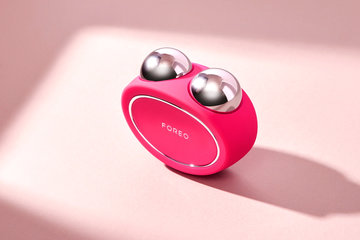 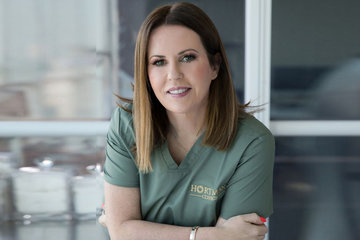