Nahla Al Rostamani: The Thrill of the Race 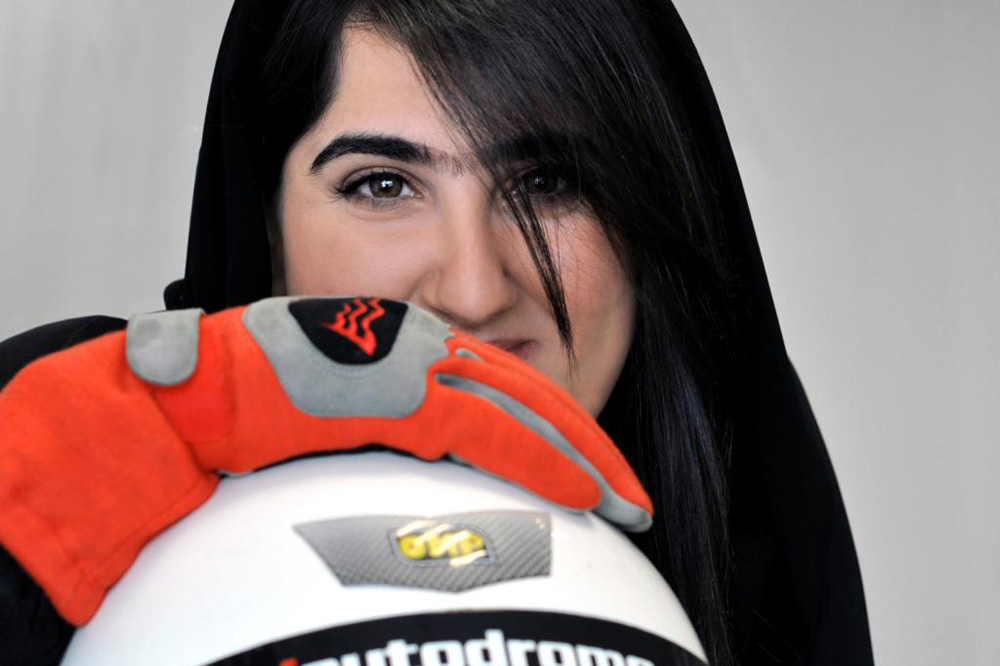 She’s the first Emirati woman to successfully earn a racing license, as well as the first to be a Chief Time Keeper. Proud of her association with Formula 1 and renowned Formula 1 drivers, Nahla Al Rostamani’s need for speed doesn’t let culture, society, or gender stand in her way.

While other young girls may have been busy playing with dolls, Nahla spent much of her childhood playing with cars and eventually went on to race, setting herself up for a career in motorsports. Fifteen years on, her achievements know no bounds as she continues to set the bar and inspire more women to take up the extreme sport.

Where did your passion for motor sports begin – what piqued your interest?
It all started when I was 12 years old and my uncle used to teach me how to drive around the neighborhood and my passion continued to develop ever since. My curiosity with cars made me want to learn more about mechanics, car parts and how to tune cars too.

What does it take to be a professional racer?
Before anything else, you have to have a huge passion for this sport or you will never make it. You start by Go- Karting to develop your driving skills, then racing classes which we already have at the Dubai Autodrome and at Yas Marina Circuit. Once you practice and develop your skills, you can then move forward and participate in small local races.

For those of us who can’t drive above 60 mph without risking a speeding ticket, can you describe the feeling you get being in control of a car that travels at speeds we can’t even imagine?
It feels incredibly amazing, you feel like you are flying. It is important that your head/mind is clear o fall thoughts as your percentage of focus increases significantly at this moment, so you don't get to think of anything else other than flying at a high speed.

Who are the women that inspire you and why?
Danica Patrick. She is an American former professional racing driver and is the most successful woman in the history of American open-wheel racing—her victory in the 2008 Indy Japan 300 is the only win by a woman in an Indy Car Series race.

You’re an Emirati woman, with an unusual career, in an industry that is dominated by men, have you had to experience any gender bias within the sport and if so, how do you combat that?
Actually, I never faced any issues with men who had similar passions to mine, in fact, they embraced me and taught me more about the sport and encouraged me to go further. However, society was against me in the beginning due to culture and a different understanding of the sport, but through the years as they saw what I have achieved and what I am capable of, the negativity turned into positivity towards me. It was a challenge but I never gave up and proved everyone I can make it.

As an Arab woman, did you have to face any challenges with regards to your cultural background or family?
From my cultural background, yes indeed I faced some issues from them when it came to accepting my passion. As for my family, there were very supportive throughout my 15 years in motorsports.

Why do you think there are not more women involved in professional racing? Is it a lack of opportunity or interest?
It could be both reasons, lack of opportunity due to some believing that women can’t make it in this industry, and lack of interest, due to the way they have been raised, our culture or even being scared of speed!

In June 2018, Saudi Arabia will see women driving for the first time since the driving ban has been lifted. What are your thoughts on this and what challenges do you think they might face as the first generation of Saudi women drivers?
First of All I would like to thank King Salman Bin Abdul-Aziz and the Crown Prince Mohammad Bin Salman for allowing Women of Saudi Arabia to take this major step in driving cars and I am expecting in the coming years that Saudi Woman will expose themselves to careers in Motorsports. As for the challenges, I think the Saudi Women are very much aware of the responsibilities bestowed upon them after being allowed to drive and therefore, I'm very confident nothing will pull them down.

Do you hope to see Saudi women eventually partaking in motorsports?
Yes of course and I am willing to help or train who ever has this passion.

What 3 driving tips do you have for Saudi women who will be taking the wheel in June?
1. Follow and understand the traffic rules
2. Never ever be scared once behind the wheel or to drive at a certain speed
3. Always remember that driving is passion, art and manners

What empowers you and how do you use your position as a female race car driver to empower other women?
As a racing driver who has been doing this for 15 years, I have the capabilities to train and teach women how to increase their passion to this sport and how not to be afraid in driving with a high speed. I am willing to bring together all women who have this passion and am ready to dominate the world of motorsports.