An in-depth look at why Arab women choose science-related fields and the complexities they encounter. 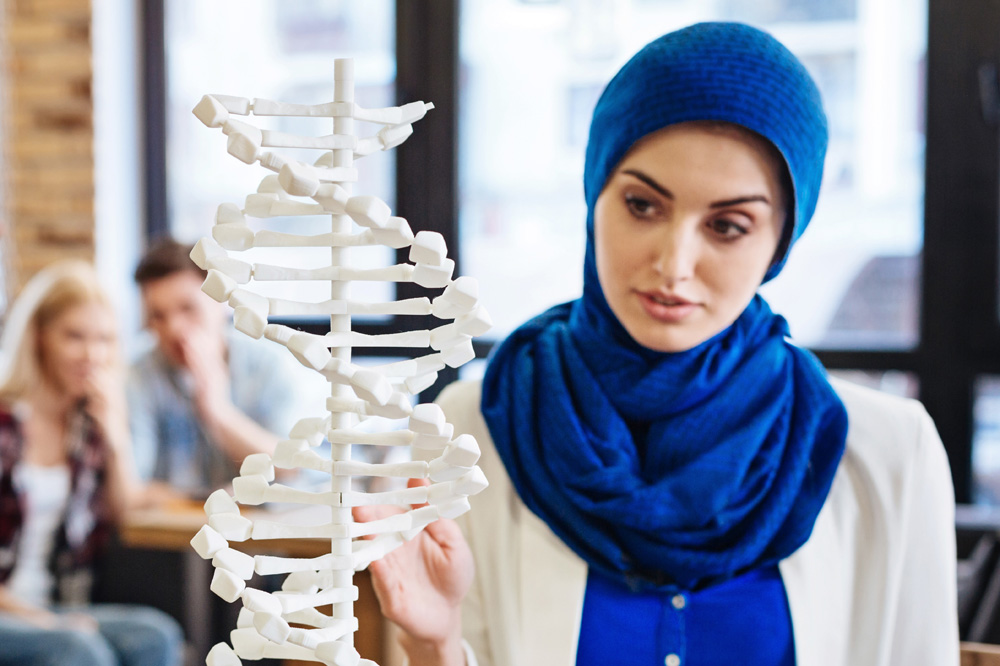 While the number of male and female college graduates is fairly equal – 5.1 million women versus 5 million men – Arab women outperform men in all fields, including the hard sciences, according to a 2012 report from the Organization for Economic Cooperation and Development (OECD) on “Gender Equality in Education, Employment and Entrepreneurship.” The United Nations Educational, Scientific and Cultural Organization (UESCO) also found women made up well over half the science graduates in a number of Arab countries, even reaching 72 percent in Saudi Arabia. Plus, the share of female graduates in the sciences is higher in the Middle East than it is in Western Europe.

More recent data also highlights how Arab women are pursuing Science, Technology, Engineering, and Mathematics (STEM) fields. UNESCO and World Bank statistics reveal in 2014, women comprised 59 percent of total students enrolled in Computer Science in Saudi Arabia, while the figures in the UK and USA were 16 percent and 14 percent respectively. A recent study conducted by the New York University Abu Dhabi also found that enrollment of female students in courses such as Computer Science and Engineering verges on 50 percent in the region, much higher than those in the United States, where the rate of female enrollment in STEM fields ranges between 10 and 20 percent, and other western countries.

Plus, in her new book “Fifty Million Rising,” Saadia Zahidi claims approximately 70 percent of Iranian university graduates in STEM concentrations are women. She also writes that in the Middle Eastern countries of Oman, Saudi Arabia, and the United Arab Emirates women represent 60 percent of the graduates in science. What’s more, she says over half of STEM jobs in several Middle Eastern countries are held by female professionals. 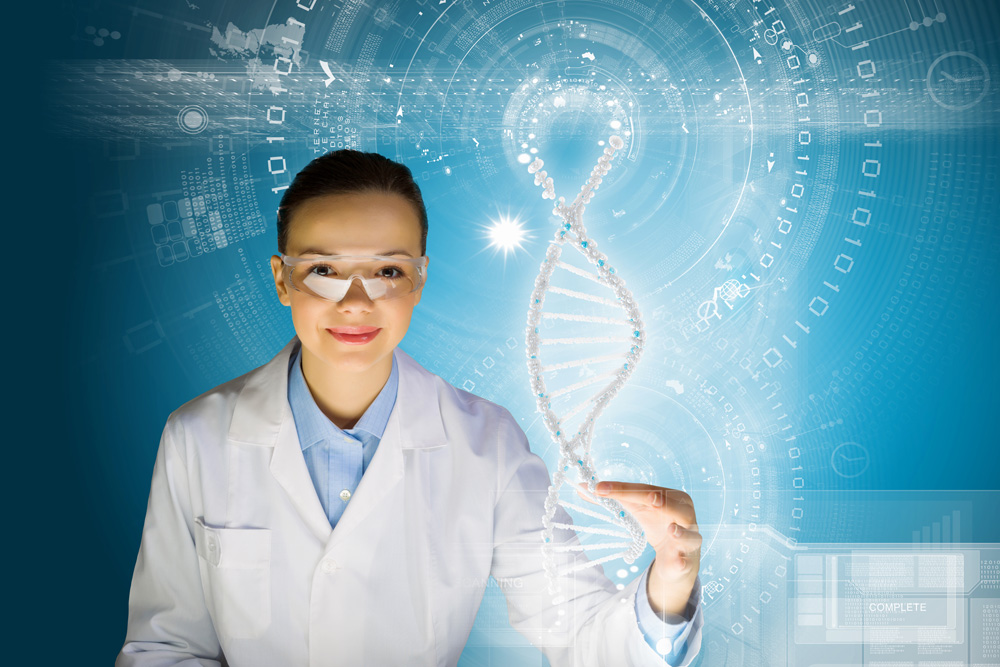 What are the motives behind Arab women choosing science majors?
According to a UK Cabinet Office survey in 2014 assessing the relationship between occupations and levels of wellbeing, job satisfaction and creativity are some of the main factors impacting students in choosing their majors. Hence, the professional growth including job gratification that improves the level of women’s creativity in a challenging environment is the leading motivator for women in choosing STEM.

For one thing, Arab women CAN choose to major in science
Indeed, a broader observation from the 2012 OECD report found gender balance in higher education is shifting slightly in favour of women across most Arab countries, pointing out that once held back by social and family pressures, Arab women can now enrol in universities at rates comparable to men, and they even outnumber men in some Gulf institutions.

But the attraction to science is relatively recent. The 2005 United Nations Arab Human Development report, which focused on the treatment of women in the Middle East, found women were still “concentrated in specialisations such as literature, the humanities, and the social sciences,” with women’s enrolment “noticeably lower in the fields of science, engineering and industry.”

Besides an orientation towards jobs compatible with “the traditional view of their reproductive roles or the division of work in the house and the raising of a family,” the 2005 report also cited discrimination.

“The rise of female numbers is a result of a new opportunity for women in the Gulf countries,” Dr Hoda Baytiyeh says. The computer engineer and instruction-technology expert at the American University of Beirut notes engineering opened to women in Bahrain, Kuwait, Qatar and elsewhere only in the past two decades. Saudi Arabia started offering engineering to women at a public university at the end of 2011. 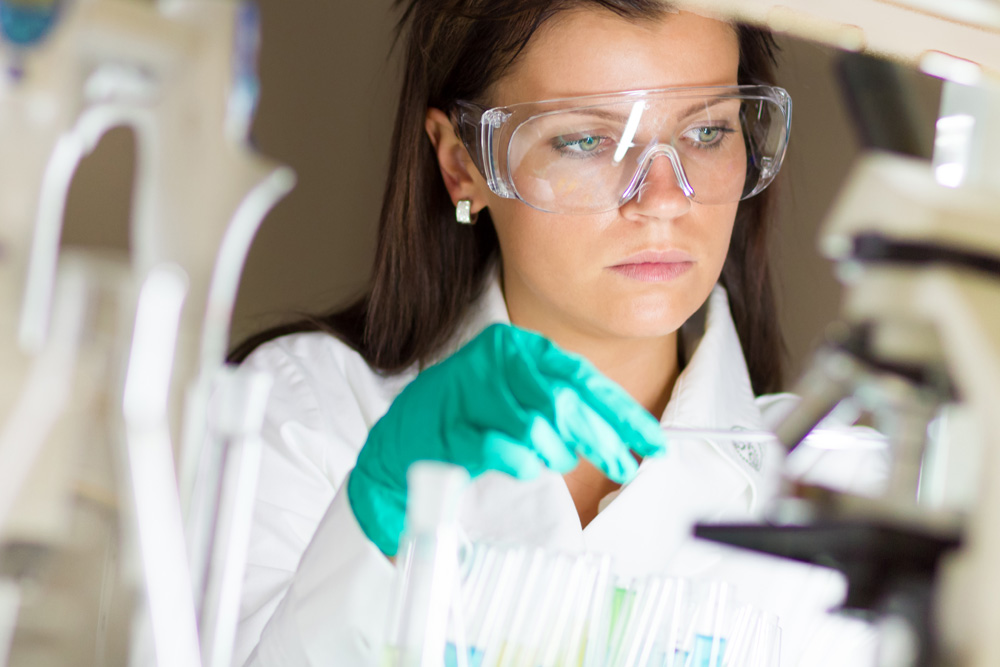 STEM professions are actually financially rewarding at a time when families, more consumption-oriented than in the past, increasingly depend on more than one pay cheque. Therefore, women are entering science in growing numbers, propelled by a trend towards two breadwinner households

The profession’s high prestige
Then there’s image, if American women recoil at the geek stereotype, to women in the Middle East, “it’s a big deal to be an engineer,” Nehal Ibrahim Abu-Lail says. She earned a Ph.D. from Worcester Polytechnic Institute and is an Associate Professor of Chemical Engineering at Washington State University.

In Egypt, for instance, an engineer can still be accorded the Ottoman-era honorific ‘pasha’ or lord. In Jordan, Lebanon, and Iraq, entry into university-level engineering is second only to medicine in difficulty. To Jordanians, Abu-Lail says, engineering denotes a high score in a competitive national exam, higher than needed to enter law or business.

A push to become knowledgeable in STEM coincides with the changes in the Arab world
On another hand, the growth of women in STEM coincides with educational and economic changes easily overlooked amid troubles in the region. “There is a strong push in many countries towards becoming knowledge-based economies, and (using) science and engineering as a means to do so. This is attracting women and men to the field,” Kirstin Matthews said when interviewed by “Prism” online. Matthews runs the science and technology programme at Rice University’s Baker Institute for Public Policy.

The difficulties encountered by female scientists in the labour force
The irony is that women in the Arab world are acquiring the skills in the fields of sciences, technology, engineering and mathematics necessary to compete with men in these new and emerging markets, but it appears that they were not prepared enough in college for turning knowledge to product, carrying out experiments on their own and ingenuity, according to a study done by Baytiyeh on women engineers in the Arab world.

In the same study, the transition from university to career was shown as complex and critically important for graduating women in STEM. Issues included taking on new responsibilities, performing under pressure and dealing with superiors. What’s more, the results showed women possess sufficient theoretical and technical skills, but are weaker in creativity and innovation.

Karen Antar, a Chemical Engineering student at the University of Balamand in Lebanon, said: “Low female participation in engineering is due to varied facts, from not understanding what engineering is and what kind of work is done, to the uncertainty attached to the future career of a woman engineer. Let’s not forget the lack of women role models in the engineering industry and low self-esteem since the field is still perceived to be under male domination.”

Difficulties combining managerial and technical skills
The primary problems respondents in Baytiyeh’s study on women engineers experienced were related to managerial skills. Encouraging others to do a given task, being prepared to take risks, leadership abilities and knowledge of business and public guidelines were the four biggest problems for women scientists.

This is indicative of the difficulties associated with combining management and technical skills. Such findings may imply Arab women in the scientific field do not see themselves moving into managerial positions. Another thing that was noted was that none of the respondents had specialised in management.

The lack of mentoring and networking
“Another common challenge to all women scientists is the lack of mentoring and networking,” Rana Dajani, the Assistant Professor of Molecular Biology at the Hashemite University in Jordan, says. “Most women scientists everywhere have two jobs — work and home — and most will not give up home for work. So they don’t take time after work to have a coffee with their colleagues. Yet this informal environment is where scientists learn what is going on, where they lobby, network, mentor and get mentored. Men mentor each other and spend time together after work, fostering the men’s club. Women rush home to take care of children, not because they have to but because they want to,” Dajani, who is also a Fulbright visiting professor at Yale University, adds.

Dajani started the Jordan mentoring network in 2009. She set up a few meetings and created a database of all the women scientists in Jordan. She later applied for a grant from the U.S. State Department to support the creation of an online mentoring programme, but was unsuccessful. Dajani is a mentor on Mentornet and AMENDS. She also became a mentor at Yale in the WISAY programme.

“Engineering work has traditionally required long hours outside of the home, so this is a huge problem. Sixty-one per cent of female engineers are no longer in the field,” Nermin Fawzi Sa’d says. She is an inspiring engineer who fought gender inequality to pursue her own dreams and launched the Handasiyat virtual hub for female engineers across the Middle East.

All of these are common challenges faced by women scientists when transitioning from university to labour. Other common challenges would be related to productivity, for instance, which is measured on a male scale, and the years spent taking care of children, which are not calculated as part of the gross domestic product of a country.

STEM careers are truly helping professions that build communities and transform nations. These professionals are in charge of solving the complex problems of today’s world and its future. They are working to find solutions for global warming, cancer, third world hunger, disappearing habitats and an interdependent world economy. Yesterday’s stereotype of the ‘geek’ in a lab coat is not representative of today’s STEM teams, where economists work with researchers on technical transfer and engineers build state-of-the-art equipment for businesses working with cutting-edge technologies. When their environment offers them a chance, women reap the benefits of STEM and build transnational networks. 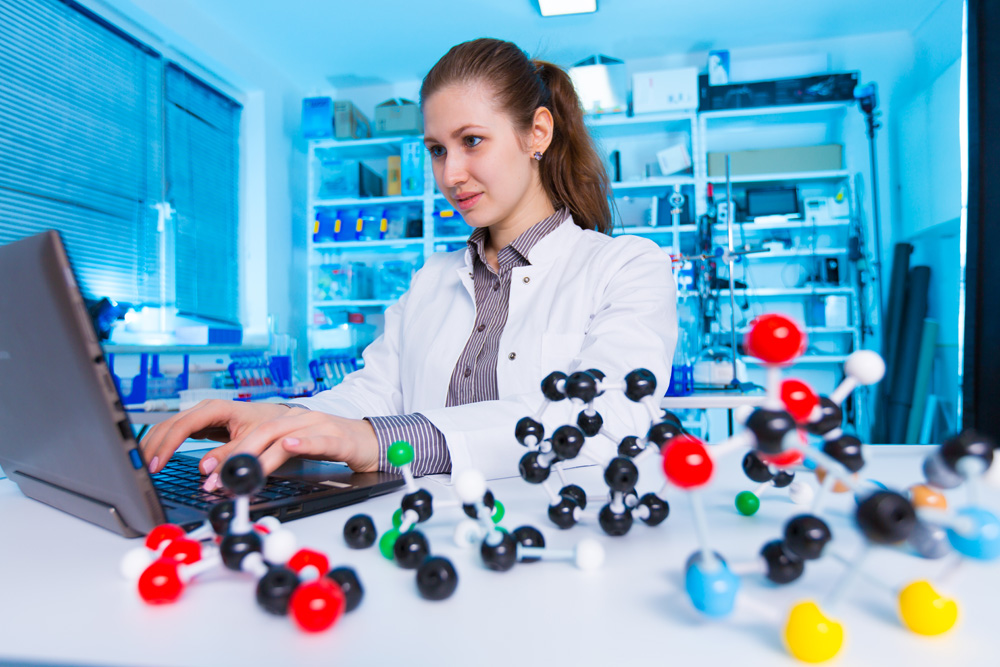 The role of the Internet of Things​
Dr Hind Zantout, Professor at the School of Mathematical & Computer Sciences, Heriot-Watt University Dubai Campus, ​says women in her undergraduate Computer Science courses actively engage with the subject matter on par with their male peers. She believes it is beginning to have a positive impact in the technology startup market. Zantout also sees multiple roles to be filled by women as the number and type of Internet-connected devices continue to expand. "With the Internet of Things​ fast hurtling towards us, there is also a pressing need for women to take part in shaping all this new world’s aspects," Zantout says.

Since true and lasting democratic change relies in large part on the creation of a strong middle class, there’s a need to enhance women’s labour force participation rates in Arab countries, where it is among the lowest in the world. The creation of a strong middle class is therefore much more difficult to sustain, which in turn makes a secure democracy – one that ensures the rights of women– less likely to develop. Online work opportunities are proving to be a major tool in helping women throughout the developing world earn a living, care for their families and gain economic independence, but are they enough?