The National Museum of Qatar: A Marvel That Shares the Country’s Journey Through Time

Add the striking National Museum of Qatar, which displays the country’s rich cultural heritage while celebrating its future identity, to your to-do list when in Doha. 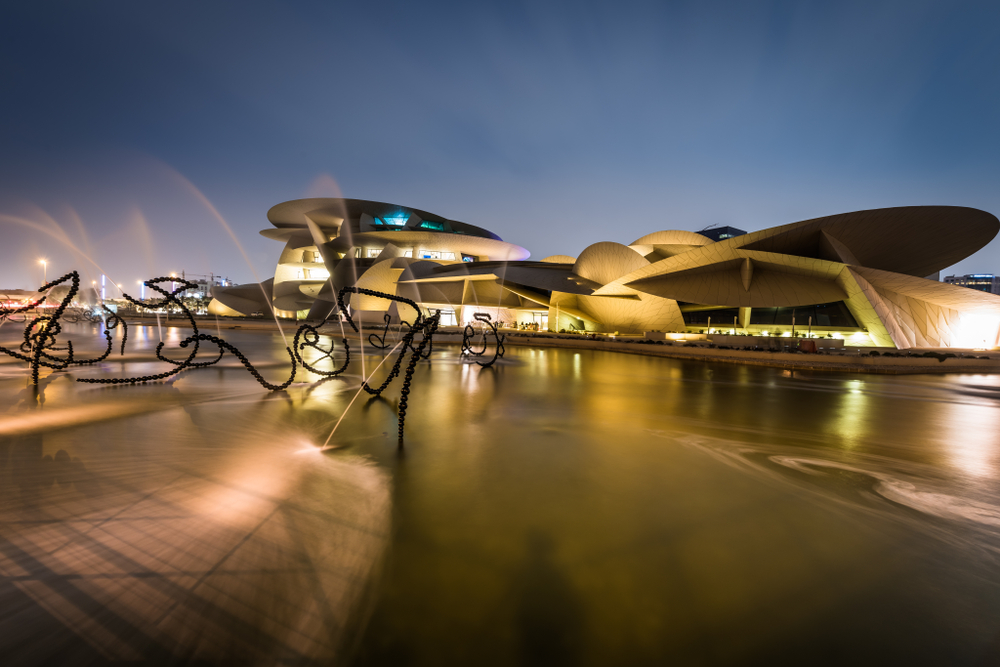 After 10 years in the making, Doha has a stunning new architectural highlight, the National Museum of Qatar. And following the lavish opening ceremony, which celebrities like Johnny Depp, Naomi Campbell and Victoria Beckham attended, the building that’s been described by the UK “Times” as "the most extraordinary building of the decade," opened to the public. 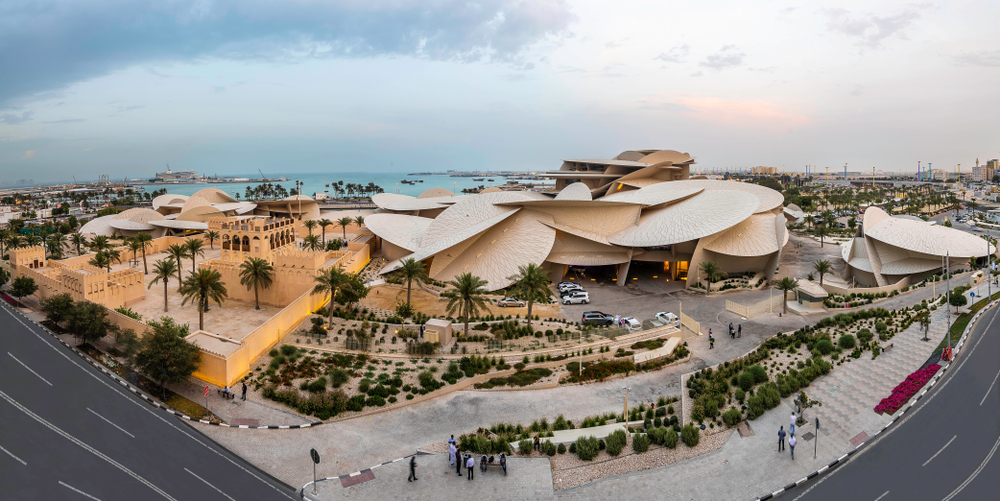 Here’s what to know about the architecturally outstanding exhibition space at the south end of Doha’s Corniche. 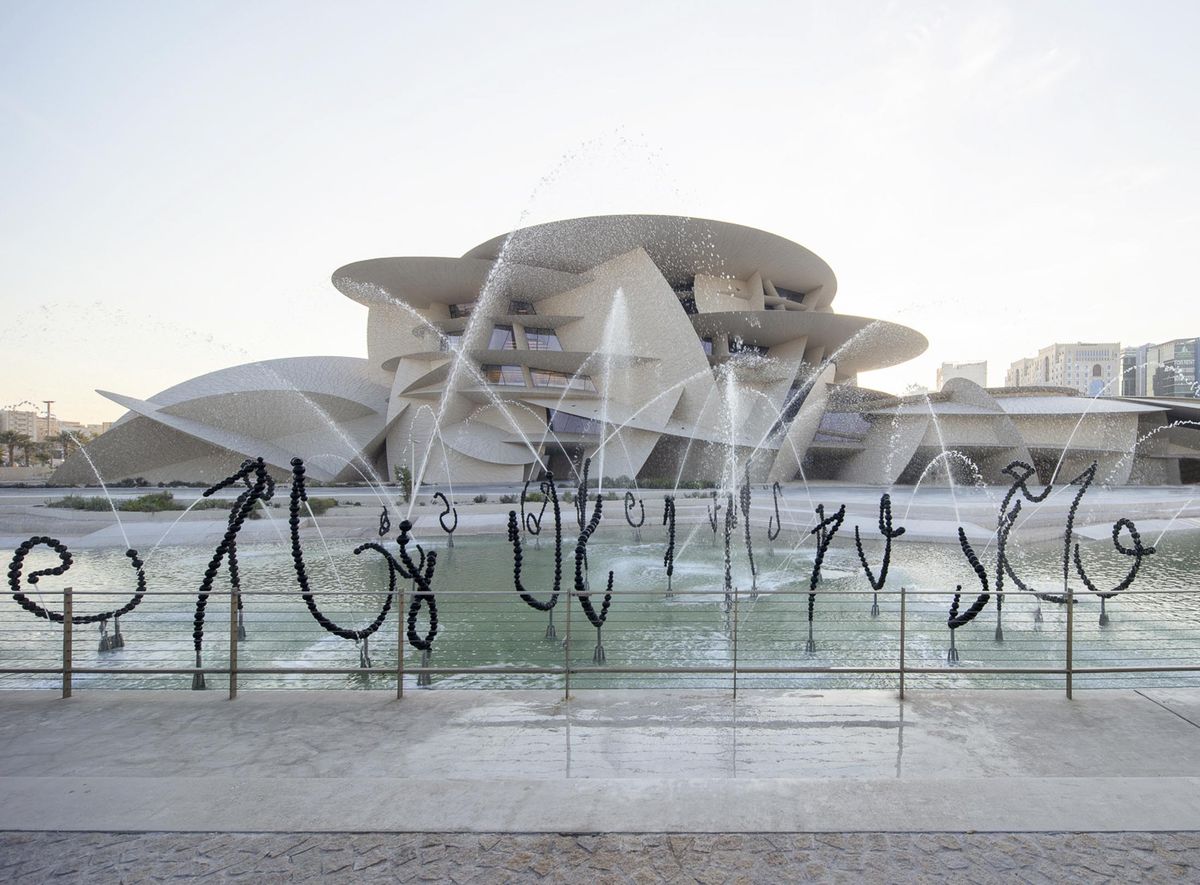 Designed by French Pritzker Prize-winning architect Jean Nouvel, the 560,000 sq ft National Museum of Qatar is certainly a dramatic addition to the Doha waterfront. Local desert rose crystal clusters, which from when minerals crystallise beneath the surface of a salt basin, inspired Nouvel while he was designing the building. 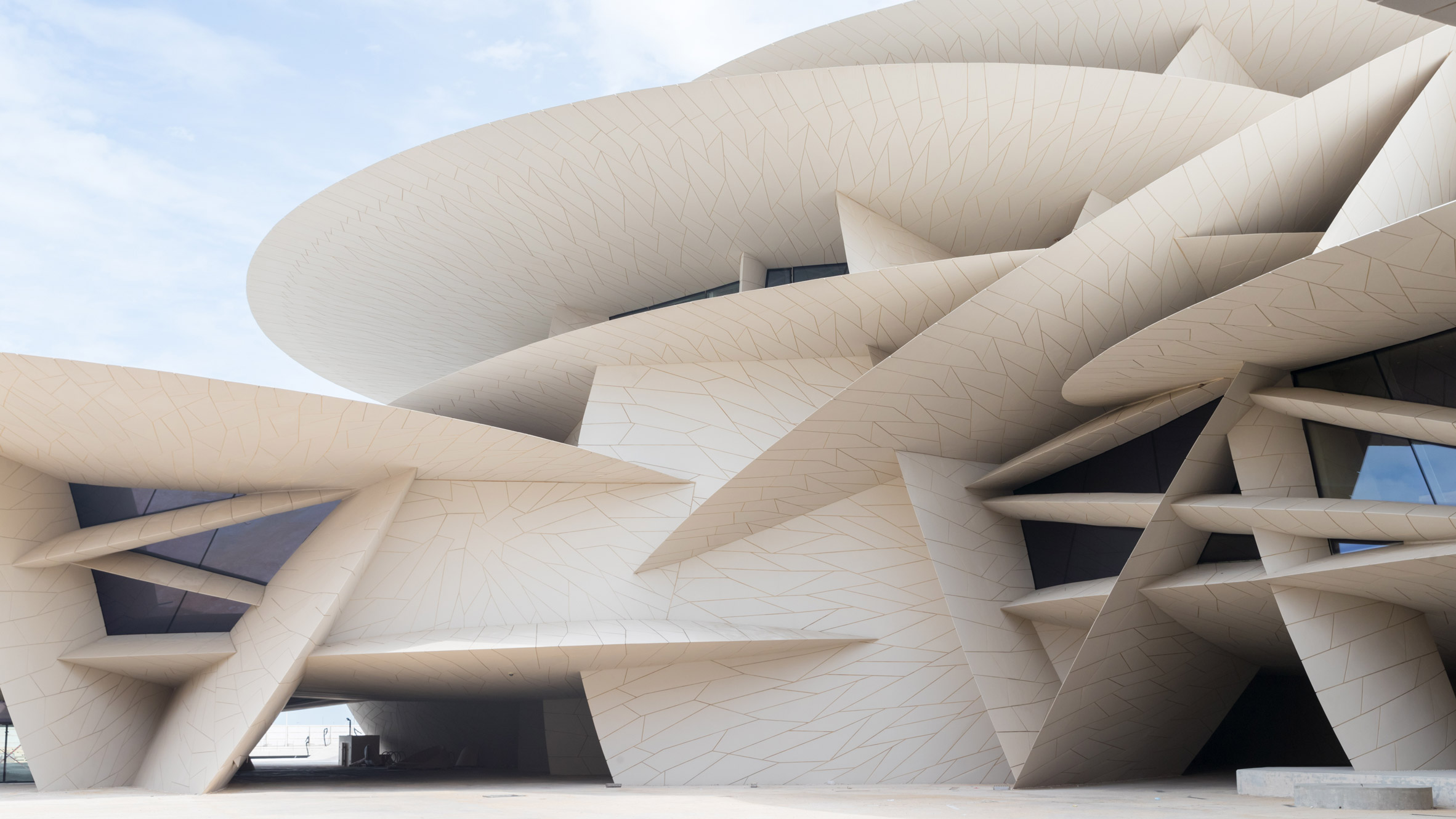 With its revolutionary shape, the mega-museum, which cost $434 million, features a range of curved discs, cantilevered angles and intersections that take you by surprise. Parts of the overlapping circular roof shades the central courtyard in the middle of the museum, while the buidling’s sandy concrete shell is an ode to its desert setting. 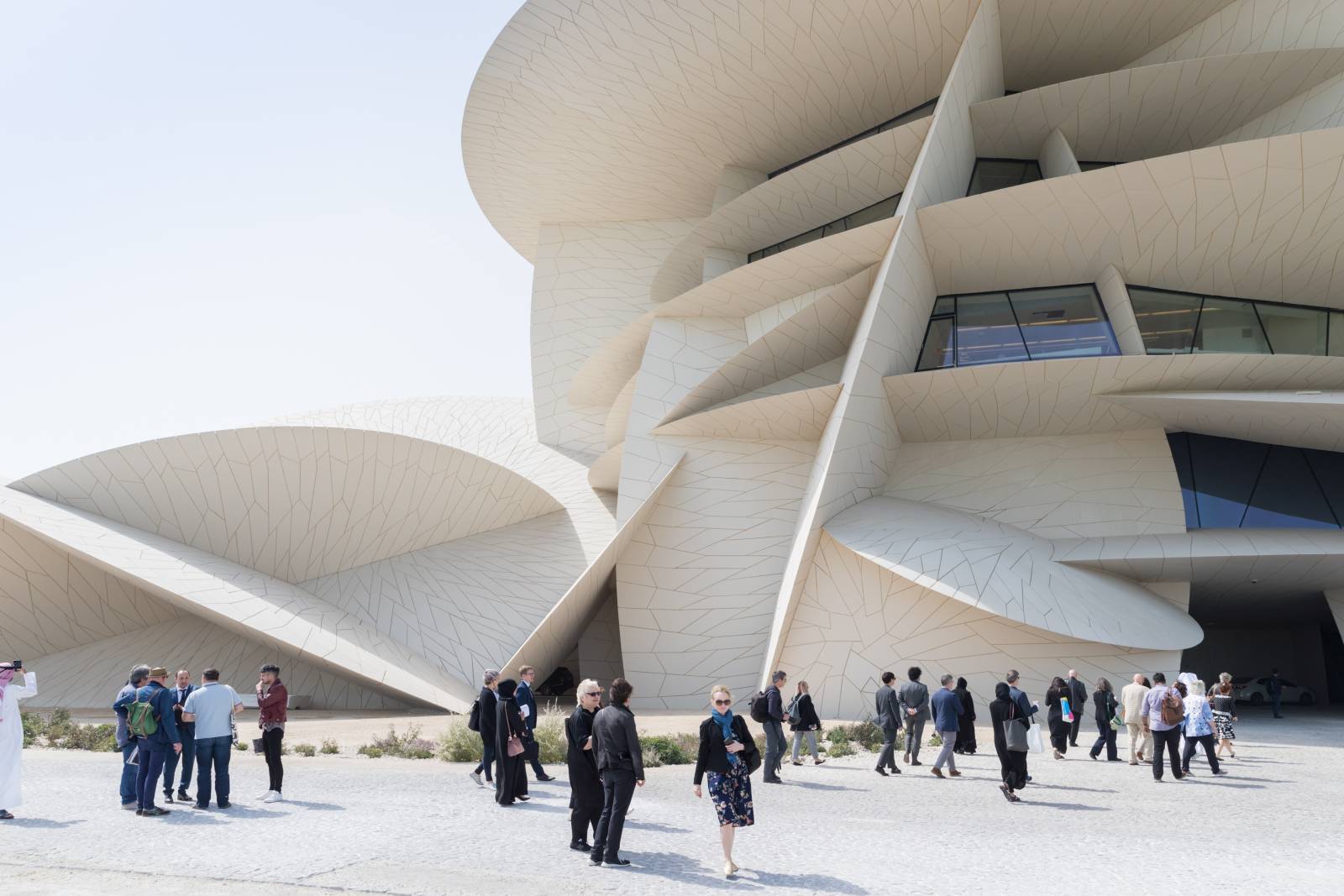 "The desert rose is a symbol of the desert because it’s an architecture created by time and the desert itself," Nouvel, who was also the mastermind behind Louvre Abu Dhabi, said at the museum’s inauguration. "Nobody knows what the inside of a desert rose looks like, and we created a typology of intersections that makes you question what is inside it." 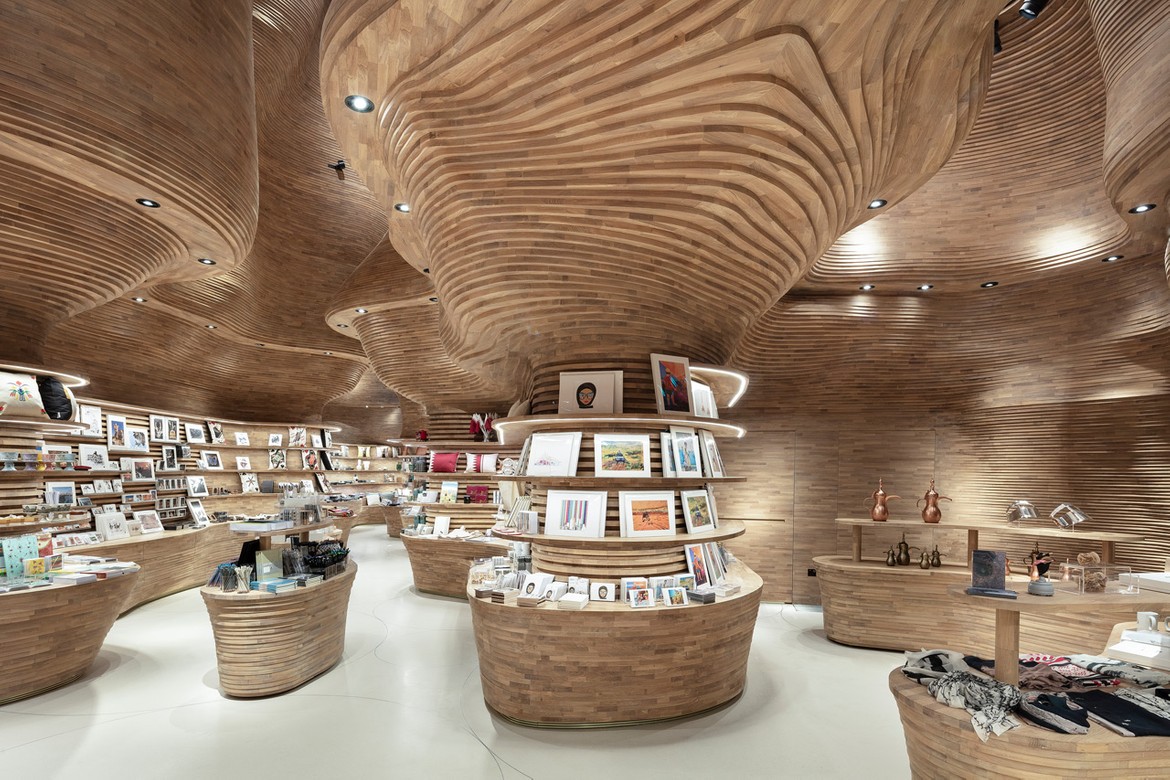 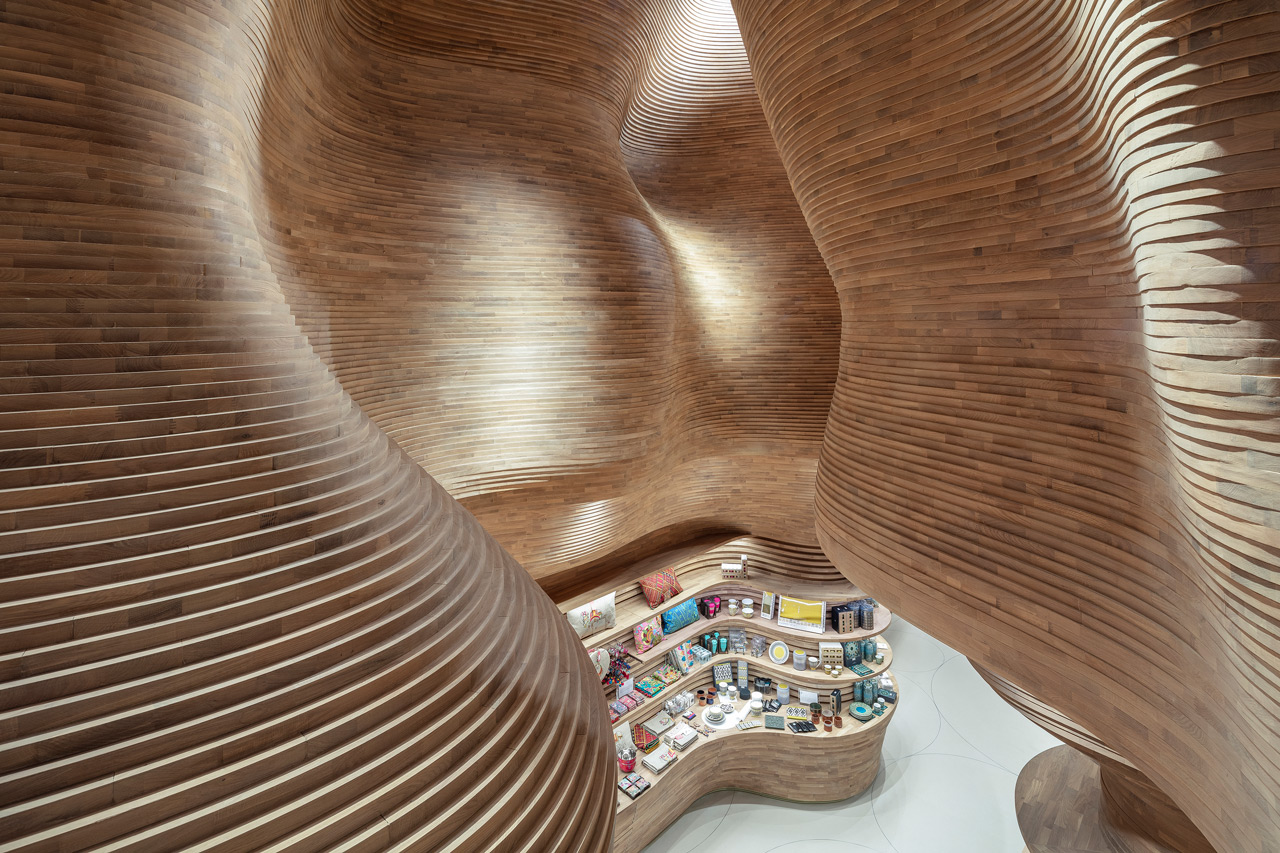 After talking to locals, Takada developed a visual design of Qatari history, including aspects that range from the early stages of trade to nomadic lifestyle and the physical environment. His aim was to enhance the museum visitors’ cultural and memorable experiences. 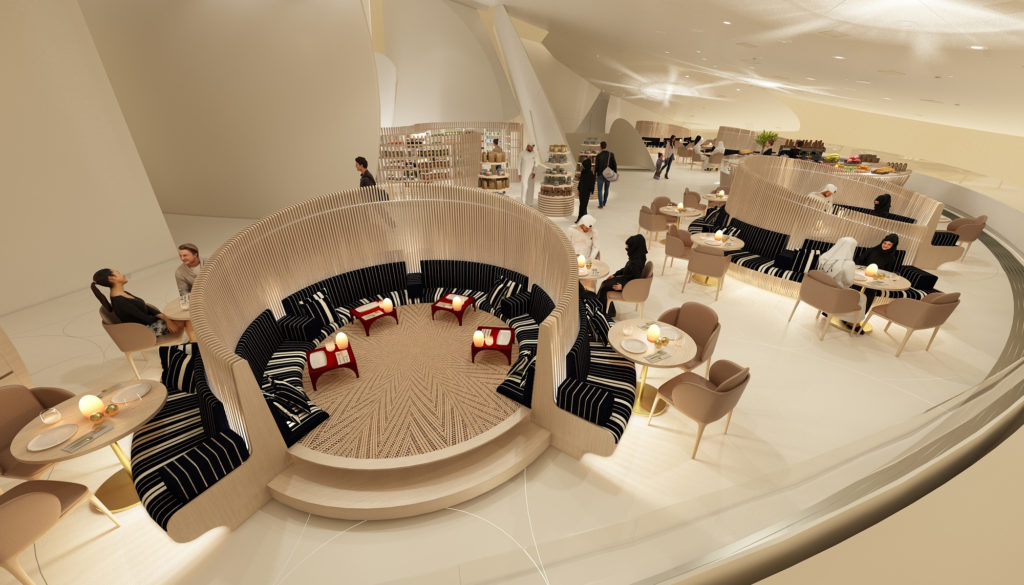 For example, for the décor in Café 875, where you will find four medallions throwing rings of light on the ceiling, the designers took inspiration from Qatari gold jewellery. At the Desert Rose Café there’s ambient floor lighting intended to mimic dusk light in the desert, while in Jiwan Restaurant, which has dining pods on the panoramic terrace, the design expresses Qatar’s unique landscape where the sea meets the desert. 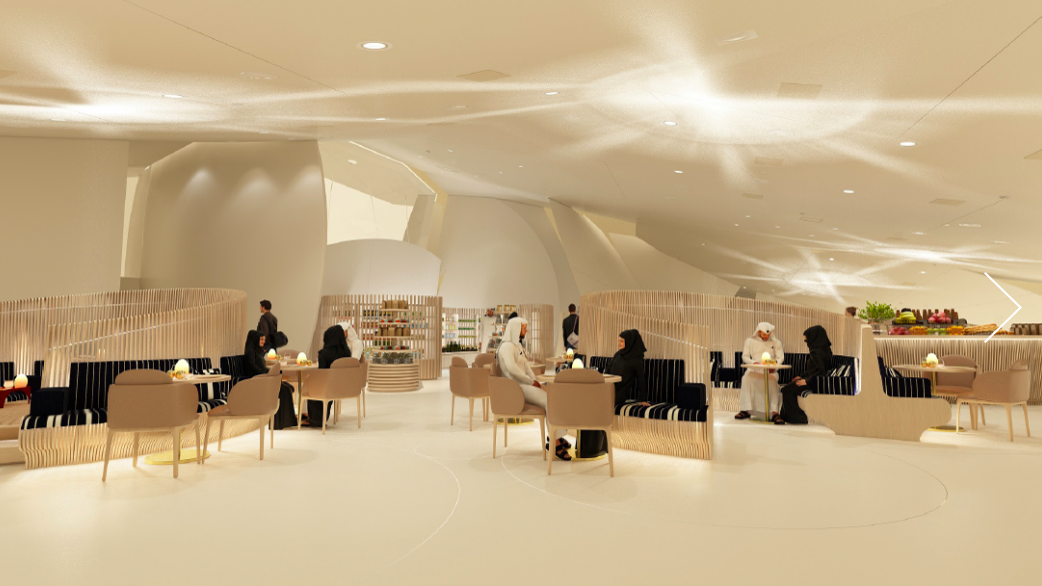 Who wouldn’t want to dine under over four million suspended pearl-like crystal beads? Visitors will also find a 220-seat auditorium, for the regular programme of events, and shops, which symbolise the Dahl Al Misfir (Cave of Light), an underground refuge formed by fibrous gypsum crystals.

A Journey Through Time 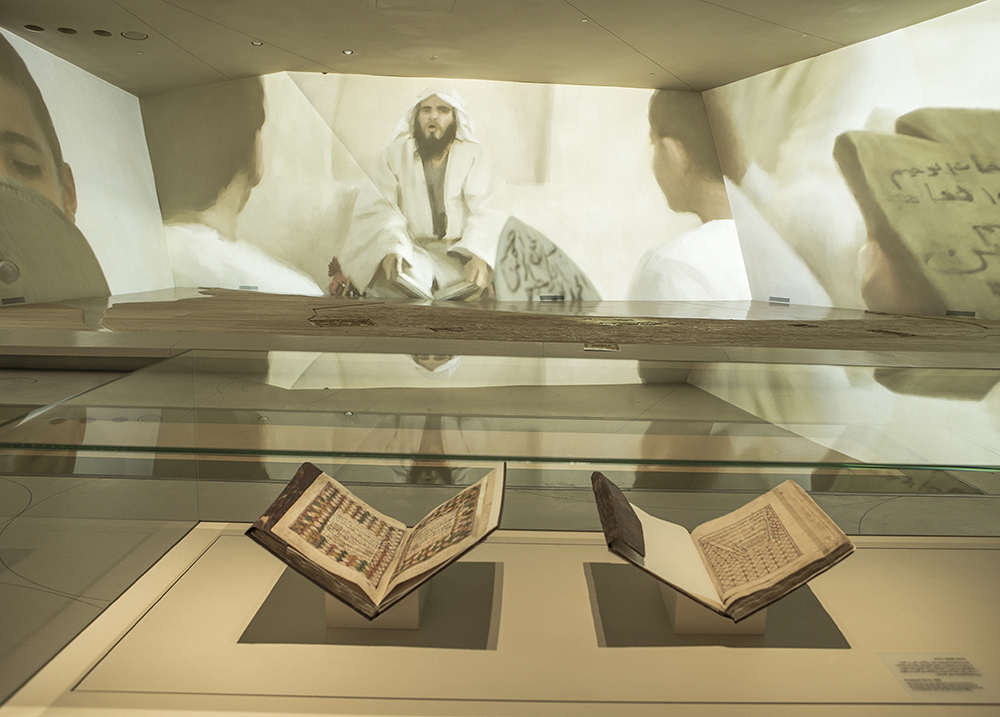 From Qatari Bedouin heritage to the traditions of fishing, pearl diving and sailing wooden dhows, Qatar has a rich cultural legacy. And the National Museum of Qatar gives voice to the country’s unique story and its people, from the traditional past to today and the future. Spread over 1.5km, the museum is organised in three “chapters”: Beginnings, Life in Qatar and The Modern History of Qatar. The impressive marriage of past and present is exhibited across 11 galleries, which delve into its oral histories, archaeology, art, music and poetry. 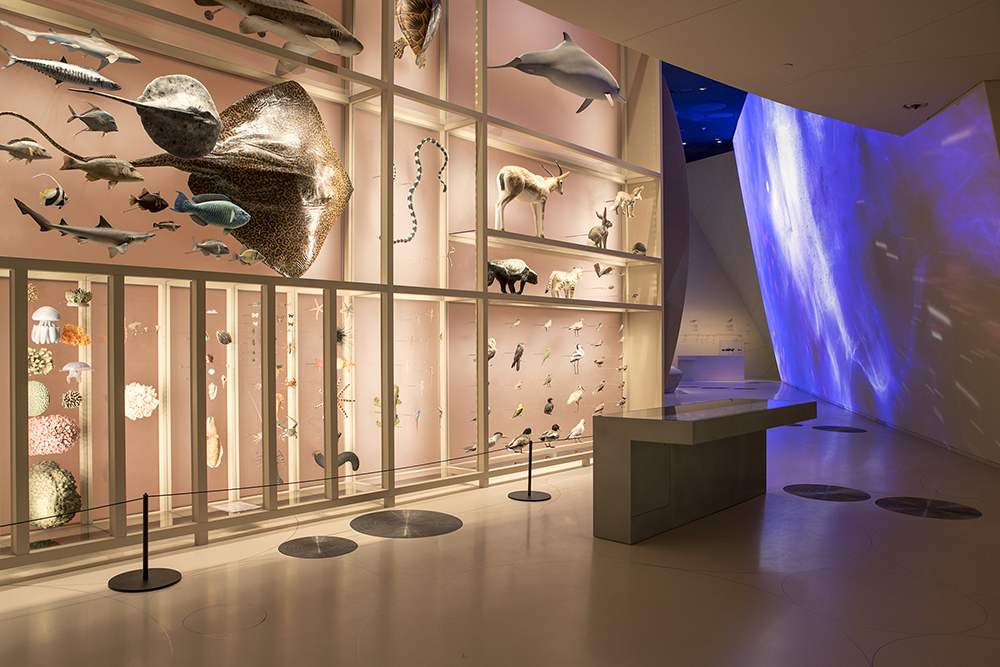 The museum's centerpiece is the newly restored palace of Sheikh Abdullah bin Jassim Al Thani, the son of the founder of modern Qatar. The palace, which represents the heart of Qatari national identity, was built in 1906 as the home of Qatar’s royal family and later became the original National Museum. Another discerning talking point is the renowned 19th-century Pearl Carpet of Baroda, which is hand-embroidered with over 1.5 million Gulf pearls and adorned with emeralds, diamonds and sapphires. The museum also observes Qatar's long maritime tradition with an exhibit on the hand-built wooden dhows that were once so important. 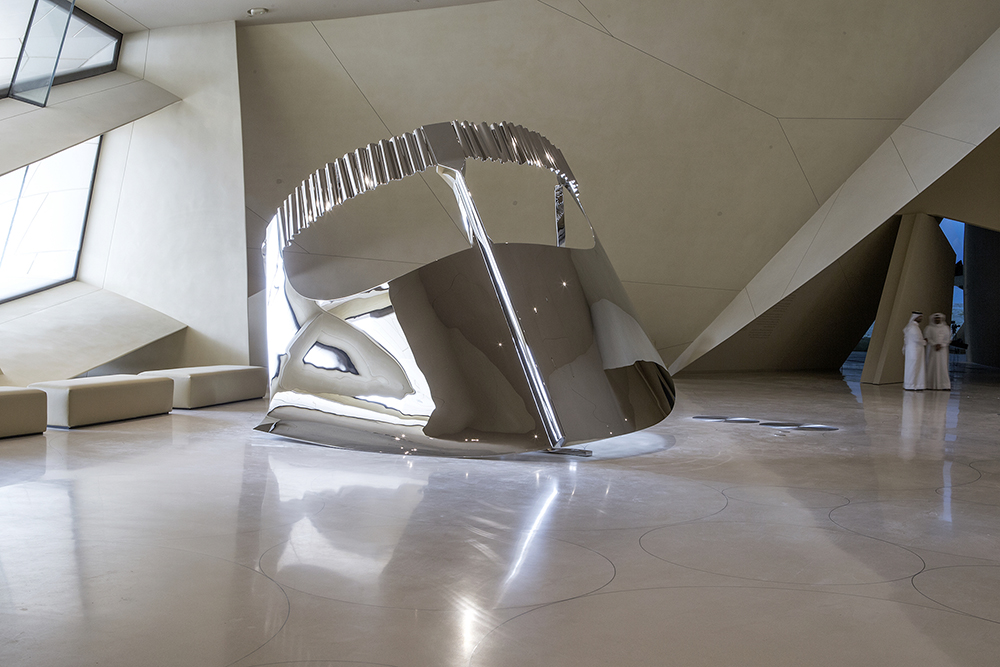 Plus, the museum has commissioned pieces from renowned and emerging local and international artists, including work by Qatari artist Ali Hassan and Qatari artist and arts patron Sheikh Hassan bin Mohammed bin Ali Al Thani. There’s also a sculpture by Iraqi artist Ahmed Al Bahrani known as the “Howsh”or caravanserai. You’ll find ancient tools and symbols, bits of old buildings, falconry gear and pearl-fishing equipment, as well as household items and weaving and coffee-making ones too. 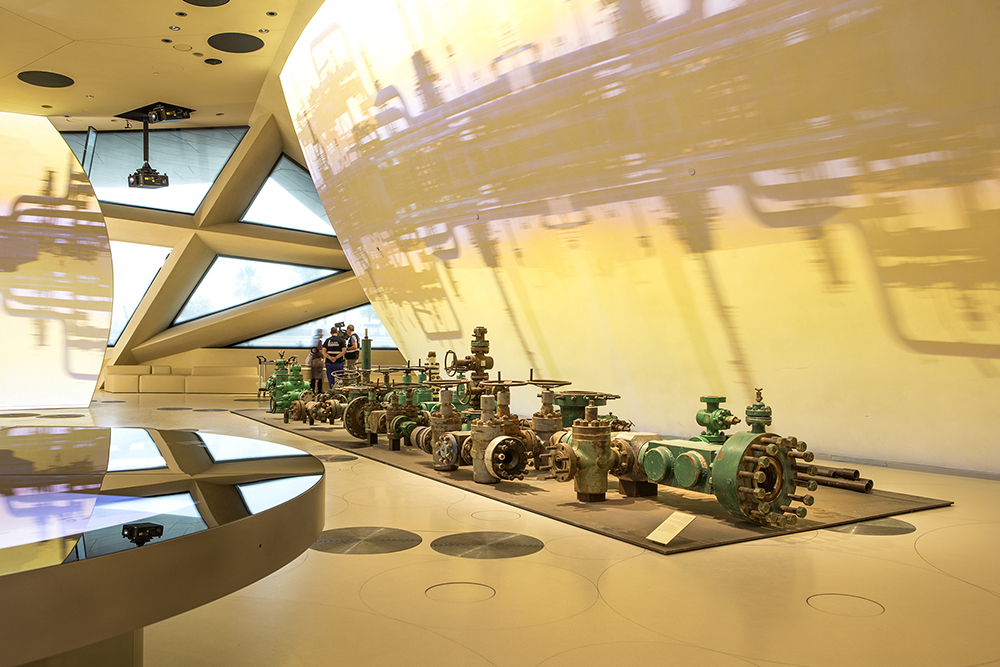 Other interesting highlights for visitors include the jewellery salon from across the ages and a platform displaying the components of a traditional bait al-sha’t, or ‘house of hair’, the tents Bedouins used as they wandered the peninsula, as well as artifacts, like swords, belonging to the ruling family. Additionally, there are sections on liquid natural gas exploration featuring extraction machinery. 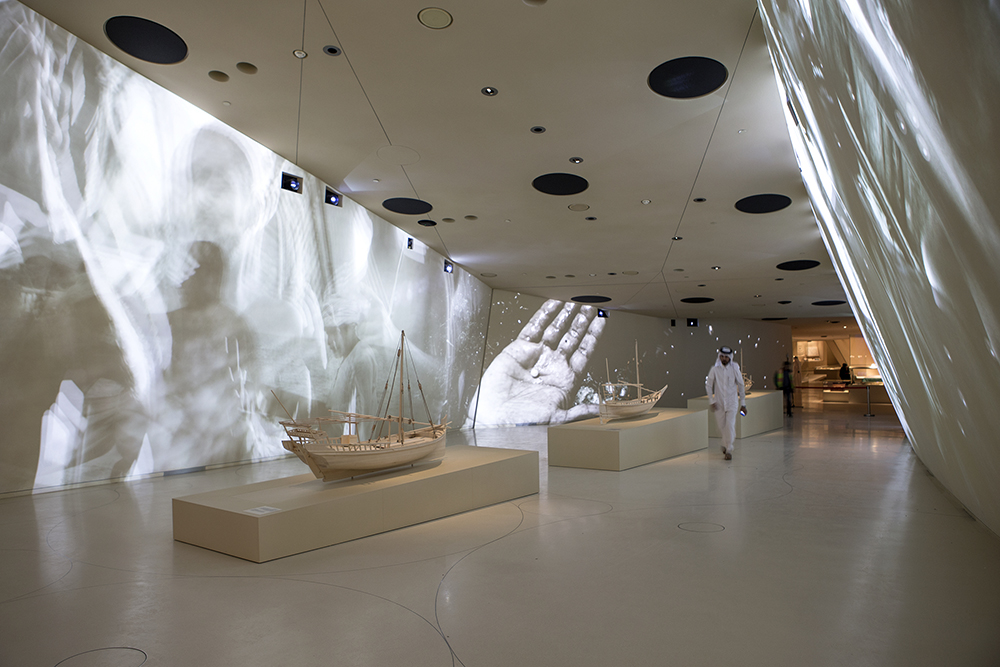 Designed to be immersive and experiential, there’s an exciting mix of all-encompassing environments at the museum. Immersive storytelling is a key component, with video, audio clips and tactile techniques in use. You’ll even be able to savour different scents like much-loved coffee and sweet, woody oud. And there’s a range of ways to participate and learn in the rich environment. 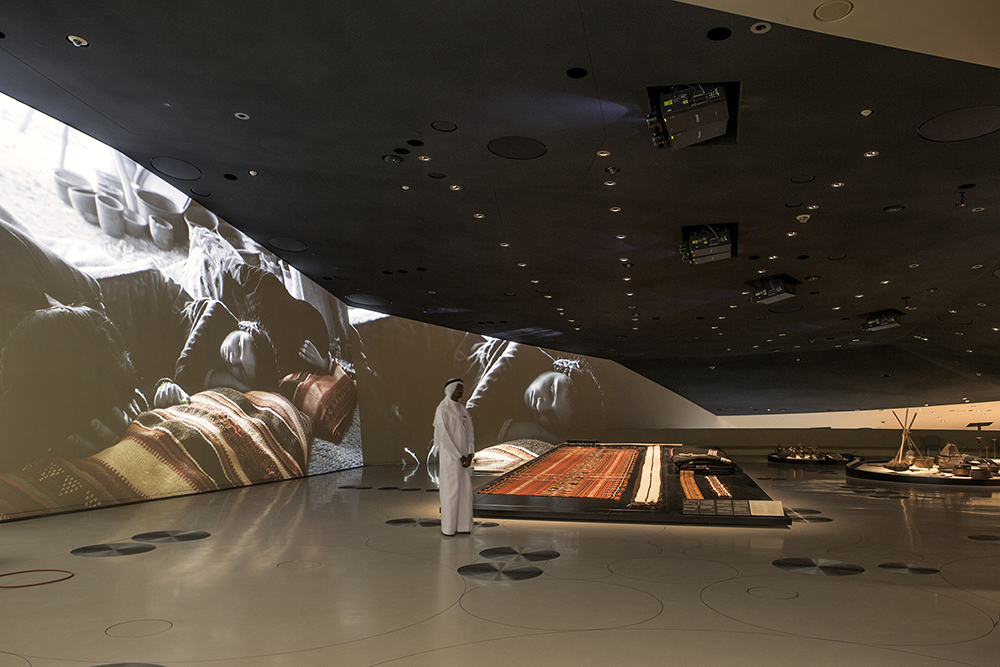 For example, students and researchers can enjoy new study opportunites at the dedicated research centre and laboratories, while a landscaped park that shines a spotlight on Qatar’s indigenous plants offers family-friendly interactive learning.