Ajlan Gharem: Paradise Has Many Gates 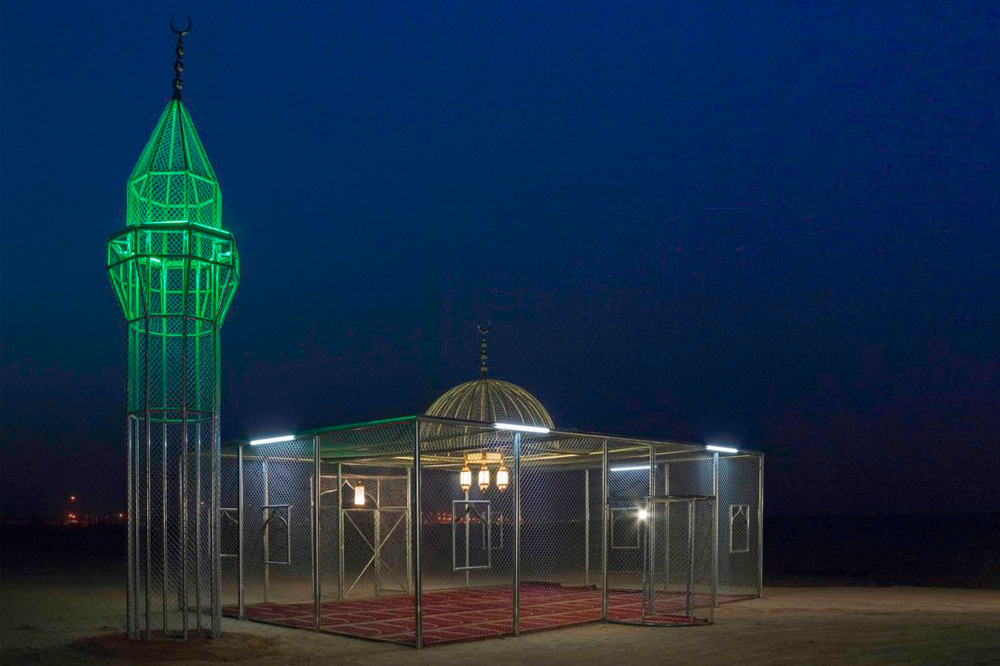 “Paradise Has Many Gates” is a life-sized conceptual piece of art by Saudi Arabian artist, Ajlan Gharem who journeyed to Canada to showcase it at the Vancouver Biennale 2018 - 2020, a renowned open-air sculpture and performance festival.

The life-sized interactive installation has the structure of a mosque, but looks like a cage of steel. It houses a traditional Middle Eastern style rug, and is made from steel fencing often used for cages and border disputes – which have sparked comparisons to both US military prison compound Guantanamo Bay and the barricades used to control the flow of refugees into Europe.

The caged structure also shares the call to prayer 5 times a day, signifying its connection to Islam. Being exhibited in a Western country, the piece sparks viewers to acknowledge the way the faith is perceived by other societies, and thus touches on issues of religion, education and Islamophobia. 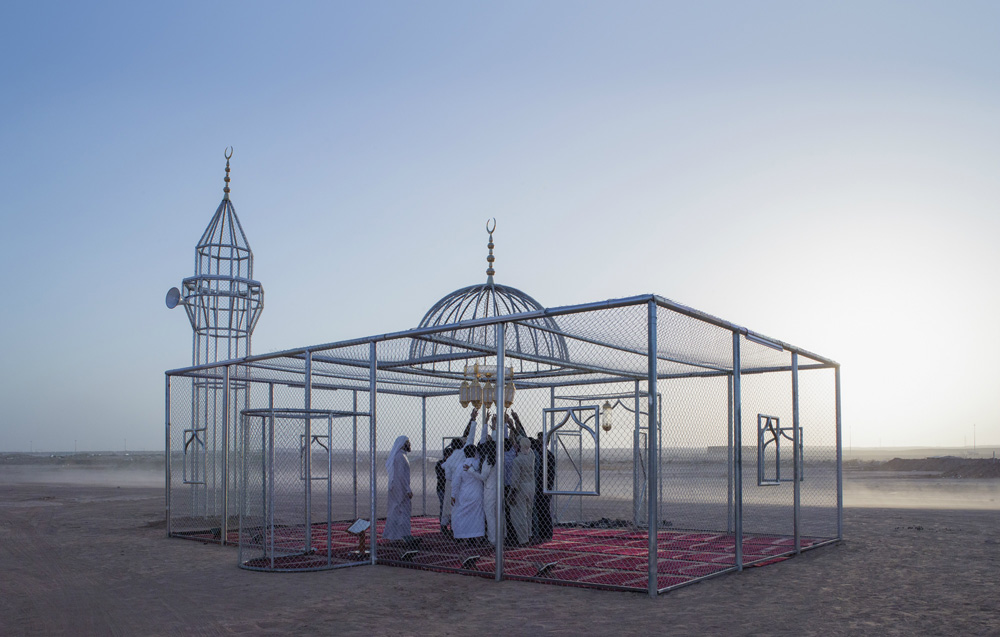 About the piece
“Paradise Has Many Gates” was originally erected in the desert, an hour from Saudi’s capital of Riyadh, with the notion that it would be the subject of a short film to be shown internationally at a number of art galleries.

At first, it was safe to say the structure initiated much debate and controversy, and was pulled from two public appearances as it sparked outrage on social media. “People started saying ‘This is a mosque made of fences. It’s like a cage,’” the artist told Arab News, “It was posted on everyone’s account, everywhere — when I opened my timeline all I could see were pictures of the mosque with people saying something bad, or something good. That’s why I was afraid.”

Ajlan Gharem’s conceptual caged mosque was bought back to life once again later in 2016 at Houston’s Station Museum of Contemporary Art, as part of a Saudi showcase titled “Parallel Kingdom”. The Muslim and non-Muslim community in Texas embraced the concept and used it as a prayer space, and a place to practice yoga. 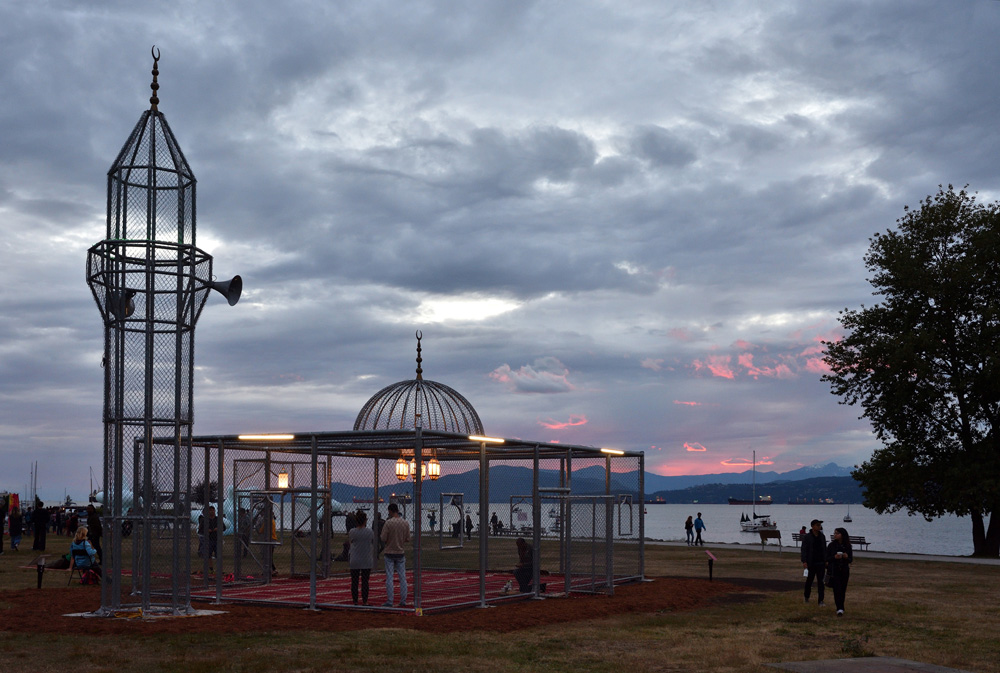 “Paradise Has Many Gates” then went on to be exhibited in Bahrain for just 24 hours after people began to use the steel installation as a place of worship. “They couldn’t make any reason for why they’re going to take it out — they couldn’t understand… (didn’t) realize what was happening,” he said. “This is good, when you have an idea that brings people together, and you see people you are just afraid of this idea.”

This summer, Ajlan Gharem has won the space in Vancouver’s Vanier Park – a well-known public space that entertains music festivals and is home to other museums. His installation will remain there for 2 years and will host performances, workshops and talks. Gharem told international press, “It’s not just something to show — it’s going to be a new space for ideas, for dialogue, for a new kind of conversation.”

About the artist
32-year-old  Gharem’s work and presence at Vancouver Biennale raised his profile as a Saudi artist and as a figure for the nation to be proud of as he finds success on an international level. However, not only is Gharem an artist in his own right, he is also an elementary school math teacher and wants to continue on the path. “For me the teaching thing is good, it gives me a chance to be among the people, among the society — the revolution is in the kids,” he said. “So, I’m a math teacher by day, and an artist by night.” 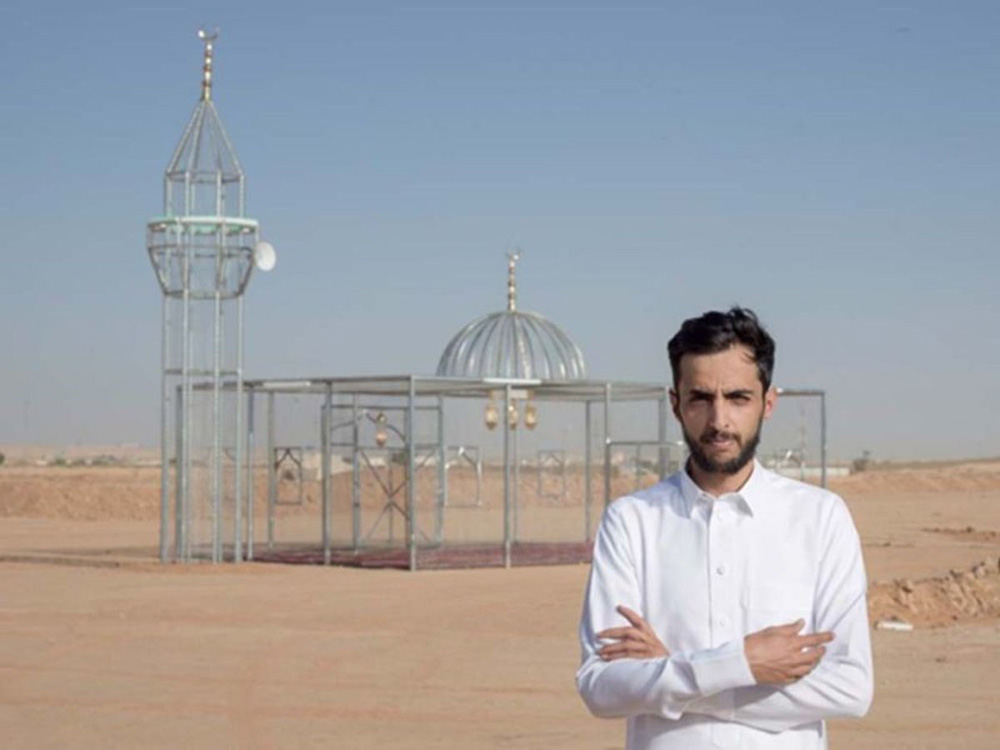 Ajlan spoke of the Saudi art scene and told Arab News, “The scene has really picked up in the last five years. Even just three, four years ago, you could only find 10 or 15 artists representing Saudi. Since then everyone has tried to be an artist and gone with the wave. I think now is the time for us, because everything is moving so quickly — at this time we start to see our problems, our issues… Everything is starting to reveal in front of us. Now the role of art is to start doing something,” he continued. “It’s the most important time to be an artist.” 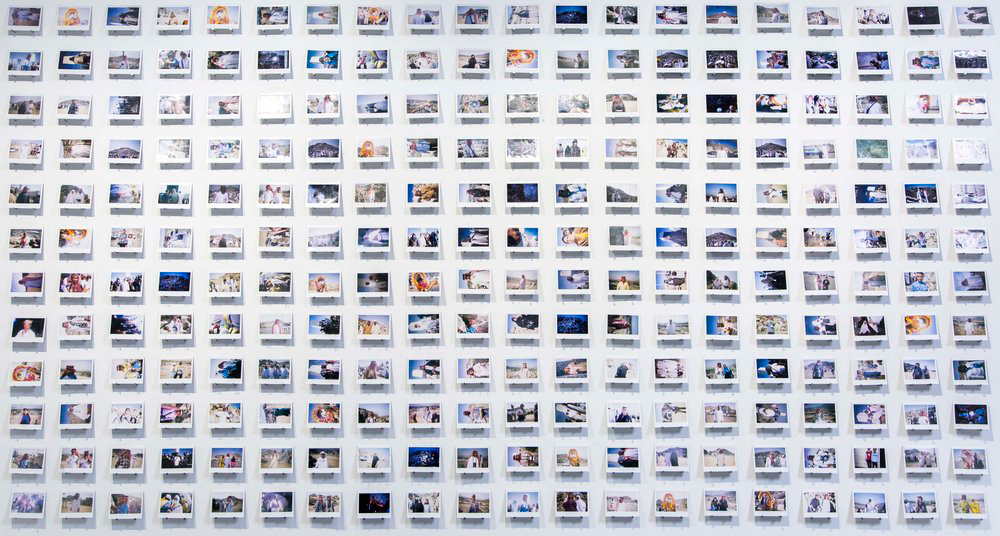 His previous works of art included a series of photographs left by pilgrims visiting Mount Arafat, a religious site. The work was titled “Mount of Mercy” and Gharem had compiled the series from more than 10,000 images he had collected during visits to Makkah over 6 years.